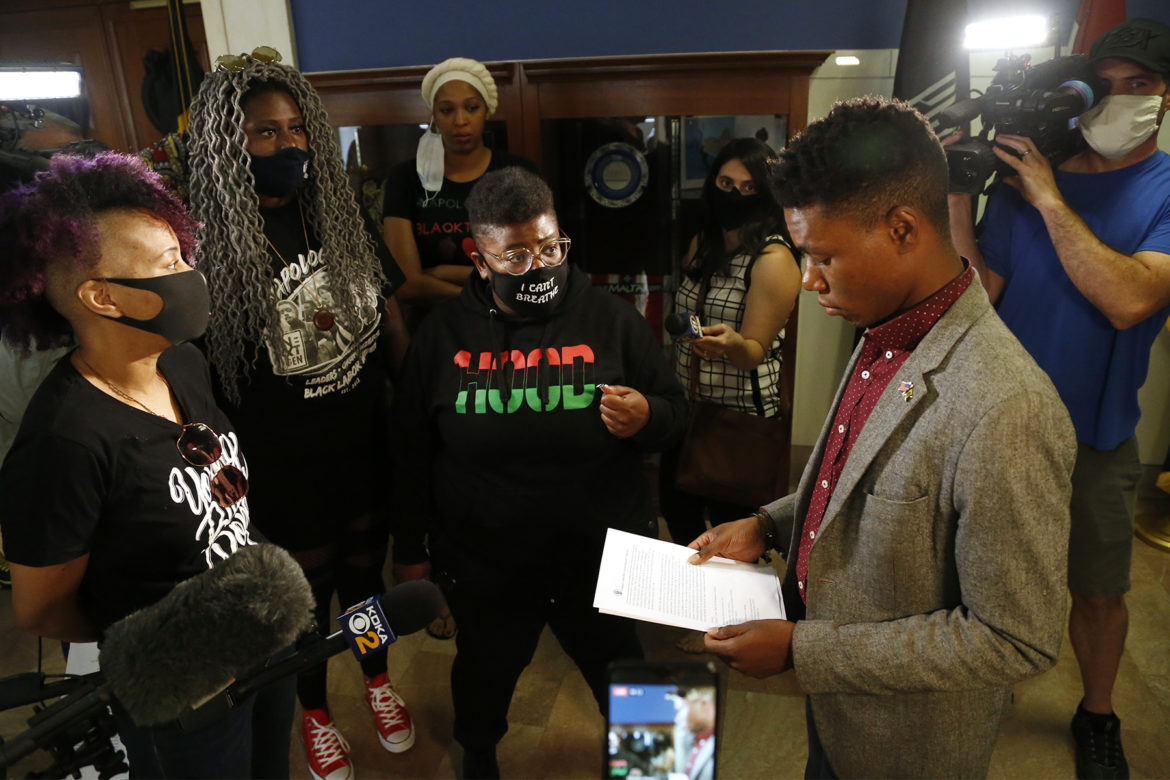 Representatives from The Allegheny County Black Activist/Organizer Collective, including Miracle Jones of 1Hood Media (center), deliver a list of demands to James Hill, executive assistant to Mayor Bill Peduto, inside the City-County Building on Monday, June 15. (Photo by Ryan Loew/PublicSource)

See the list of 12 demands from The Allegheny County Black Activist/Organizer Collective.

Calling itself The Allegheny County Black Activist/Organizer Collective, the coalition includes the Alliance for Police Accountability, 1Hood Media, Take Action Mon Valley and other organizations, plus Allegheny County Councilwoman Olivia Bennett and state Rep. Summer Lee. Representatives at the press conference indicated that they were taking their 12 demands to Mayor Bill Peduto and county Executive Rich Fitzgerald, who, they said, have not been responsive enough to community concerns.

“We should be the ones consulted around police reforms and we weren’t the ones consulted before the mayor endorsed 8 Can’t Wait,” said Jasiri X, executive director of 1Hood Media, referring to a reform package floated by some national police accountability groups, but which he characterized as insufficient. 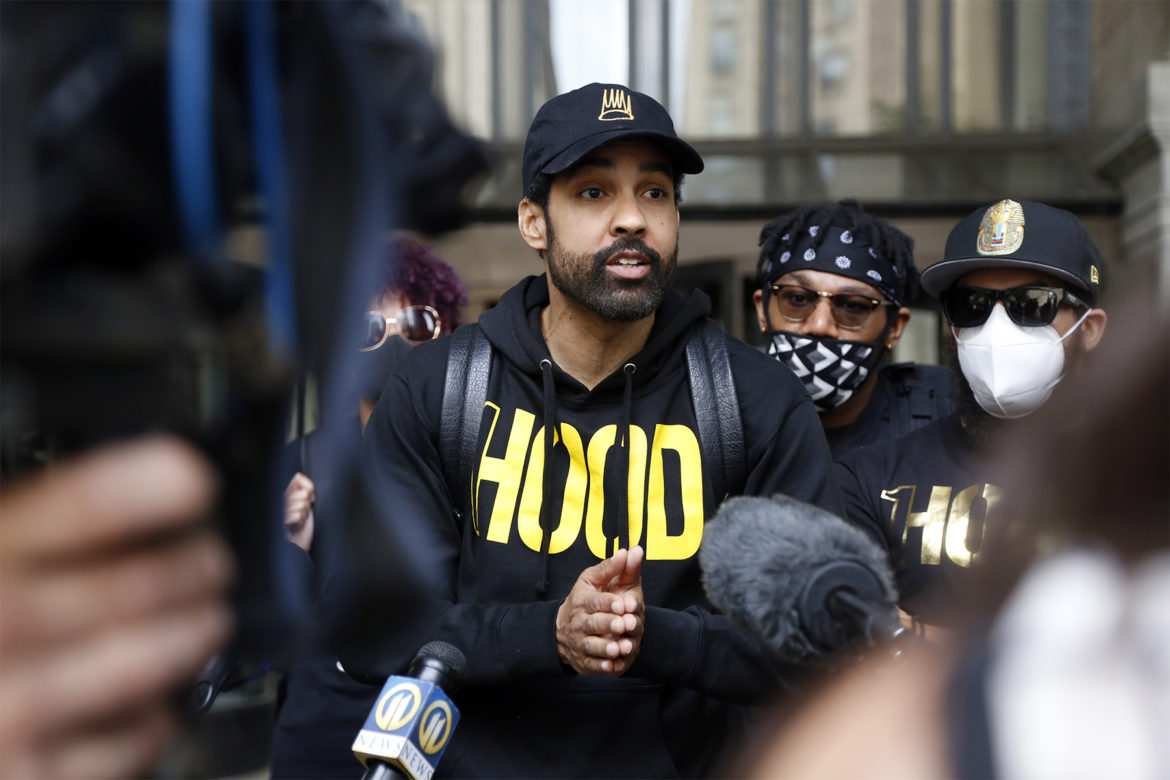 Jasiri X, executive director of 1Hood Media, speaks to members of the news media at a press conference on the portico of the City-County Building on Monday, June 15. (Photo by Ryan Loew/PublicSource)

Demands for police accountability — long an issue in Pittsburgh — resurfaced after Floyd’s death under the knee of Minneapolis officer Derek Chauvin, who has been fired and charged with murder and manslaughter.

Like many cities, Pittsburgh has, since then, seen near-daily protests, rallies and marches.

Peduto has echoed the Black Lives Matter rallying cry in public statements and has made a series of policy pronouncements this month.

On June 4, Peduto endorsed a package of proposed policing measures floated by General Assembly Democrats, including a ban on the use of choke holds and creation of an inspector general to review police policies and behaviors to prevent misconduct.

The mayor also pledged then to increase the frequency of implicit bias training received by Pittsburgh police; endorsed the "8 Can't Wait" agenda; asked for changes in state laws that open the door to contract bargaining over police discipline; and promised to review and report on police use of force. A past review by Pittsburgh’s police bureau found that Black people were 26% of the city’s population, but made up half of arrestees and 57% of the subjects of police use of force.

Black arrestees were statistically more likely “than expected” to be subjected to force.

Fitzgerald has praised peaceful marchers, but did not back a proposed ban on the use of some less-lethal weapons that are sometimes used by police against protesters, saying the state, and not the county, regulates policing. The proposed ban is before county council.

Fitzgerald’s administration released a statement saying it “will certainly review the list” of demands delivered Monday morning, but may not be able to act on “many of these items” because they are not under county jurisdiction.

“We have and will continue to invest in black communities,” according to the statement. “The County Executive has also made clear his support for the end of cash bail” and for reductions in the jail population. “He has also long been on record as supporting a Citizen Review Board but recognizes that it will take state action to expand its reach beyond just the county police.”

The mayor's spokesman, in a statement, said Peduto "is thankful for this community input," will "carefully review" the demands and "supports broader reforms being debated in Harrisburg, and locally [and] is reviewing budgets and preparing more action that will be announced soon."

“We’re not seeing transparency around police who are using force,” said Jasiri X. “Are we able to find out which police officers are continually doing harm to people in our communities?” He said the city hasn’t yet released the names of police who ordered the use of tear gas and rubber bullets at a June 1 protest in East Liberty. “At this point, shouldn’t we have their names?” he asked.

Even disciplining rogue officers isn’t enough, he added. “Just firing an officer does not change a system that’s steeped in institutional racism.”

City handling of police deadly force incidents is not entirely in the mayor’s hands. The city and the Fraternal Order of Police are enmeshed in a Pennsylvania Labor Relations Board case that could affect the way such incidents are investigated. An arbitration decision handed down in January governs many aspects of police discipline in the city.

The full list of 12 demands, as described on a flyer provided at the press conference:

The city has a Citizen Police Review Board. A proposal before county council would create such a panel covering county police, and suburban departments could opt in. First introduced in December 2018, it failed last year, but was reintroduced this year. Efforts to get the bill out of committee have so far failed. 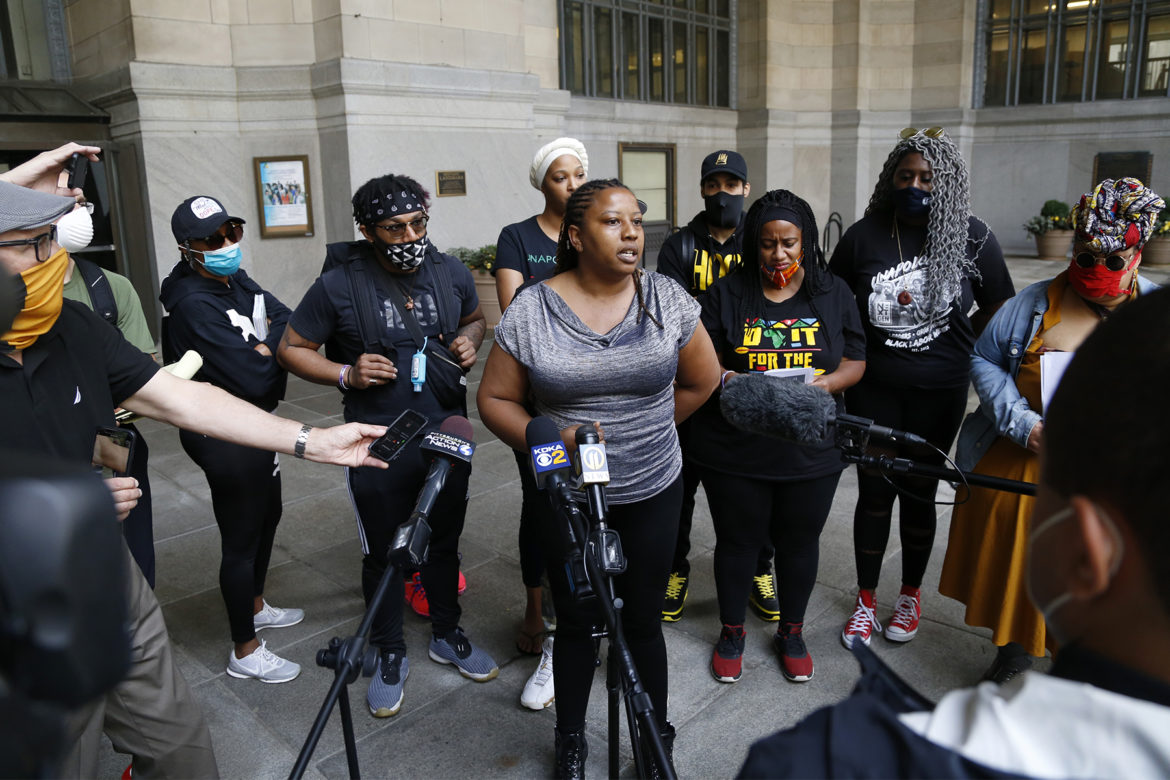 Brandi Fisher, president and CEO of the Alliance for Police Accountability, speaks at a press conference on the portico of the City-County Building on Monday, June 15. (Photo by Ryan Loew/PublicSource)

Fawn Walker-Montgomery, of Mon Valley Take Action, said that’s particularly important in the former mill towns to which many Black people displaced from Pittsburgh have moved. “The police run those towns like sheriffs and nobody’s saying a word about it,” she said.

“Reform and training are not going to make our communities safer,” said Miracle Jones, director of policy and advocacy at 1Hood Media. “Our communities are safer when they have more resources.”

The mayor's response also noted that the administration has proposed a new Office of Community Health and Safety.

On June 12, Peduto's administration proposed a new Office on Community Health and Safety, which would work to improve responses to situations for which current first responders — police, firefighters and medics — may not be ideally trained. The new office would work with community members, public safety personnel and higher education to bring about better responses to needs ranging from mental health and homelessness to drug addiction and racism.

Representatives of the activist groups said they were giving the mayor and executive a week to respond. They emphasized that they do not want violence, but some said they were concerned that without reforms, the area could see the kind of damage that has occurred in other cities nationally.

“You will no longer play politics with our Black bodies,” Fisher said.