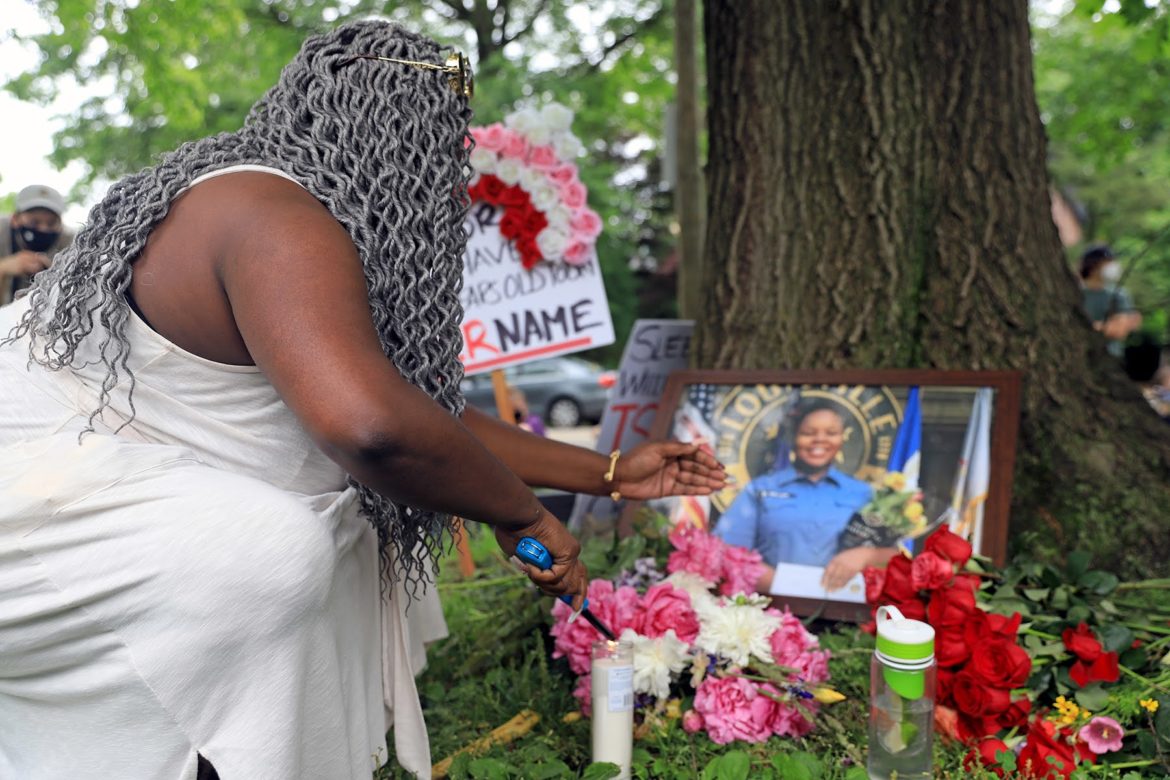 A resident lights a candle for Breonna Taylor during a demonstration in Lyndhurst Green on June 5, 2020. (Photo by Jay Manning/PublicSource)

Pittsburgh protesters on Friday honored what would have been the 27th birthday of Breonna Taylor, who was fatally shot in March by police officers in Kentucky. On the same day, the seventh of anti-racist demonstrations locally, the Pittsburgh police bureau announced a multi-agency task force to target the “small group of people intent on causing destruction” amid the largely peaceful protests.

The task force, formed earlier this week, has already launched investigations into: “...people who have attacked journalists, looted business, caused property damage and committed other crimes such as arson,” the press release stated.

Protesters gathered in Friendship Park in Bloomfield at noon Friday calling for an end to system racism and police brutality against Black citizens and protesters. The hundreds in attendance marched from Friendship Park about 2 miles to Lyndhurst Green in Point Breeze, where they stopped to hold a vigil in honor of Taylor and her birthday.

Louisville, Kentucky police officers killed Taylor at the age of 26 in her home on March 13. Police were executing a search warrant in a drug case when they broke into her apartment and shot her eight times. Media reports indicate that the home of Taylor, an emergency medical technician, was included in the search warrant out of suspicion that a man was receiving packages containing drugs at her home. No arrests have been made in her fatal shooting. 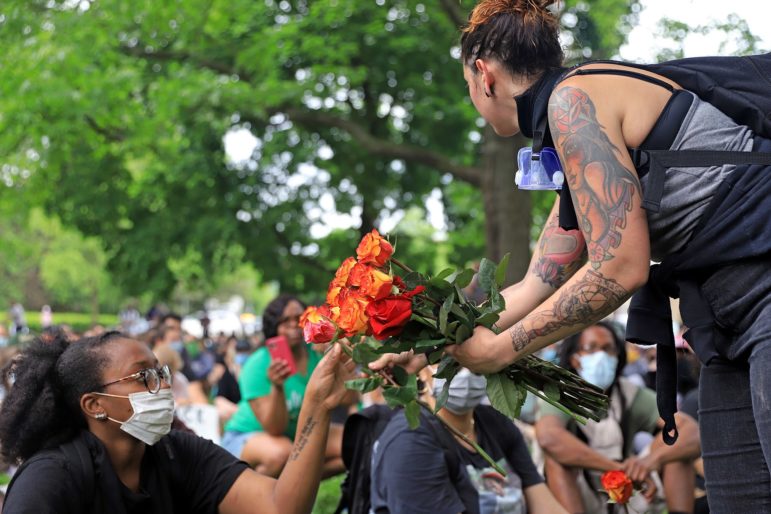 Roses are handed out to Black women during a vigil for Breonna Taylor in Lyndhurst Green on June 5, 2020. (Photo by Jay Manning/PublicSource)

Also on Friday in Pittsburgh, about 200 healthcare workers at UPMC Children’s Hospital of Pittsburgh and another group at UPMC Presbyterian left the buildings midday to make a statement against racial injustice. 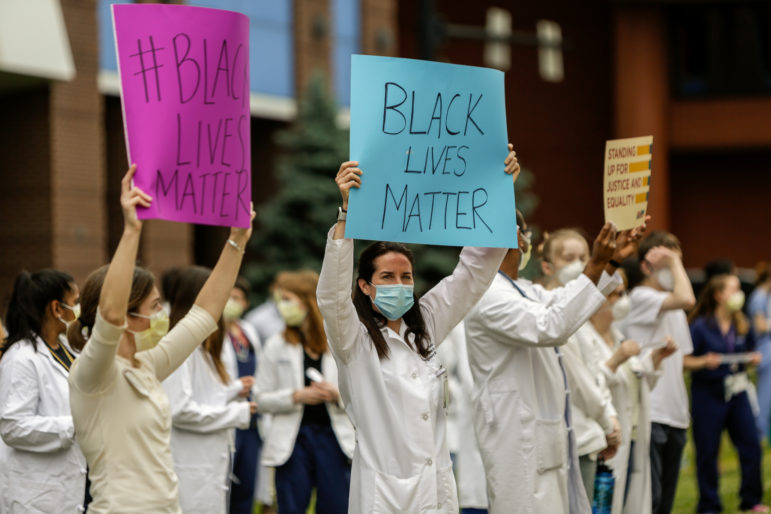 Healthcare workers from UPMC Children's Hospital met on the lawn of the hospital at noon on Friday in a demonstration against racism. (Photo by Nick Childers/PublicSource)

Some 500 people — of whom at least half were white — formed up at the McDonald’s on West Liberty Avenue, in Beechview, around 4 p.m. Friday. The crowd progressed down West Liberty Avenue, escorted by police and joined by a handful of officers, as Pittsburgh Police Chief Scott Schubert observed from the sidelines.

A line of state troopers guarded the entrance to the Liberty Tunnels, and the marchers stopped some 100 yards short of the tubes. The crowd then took a knee, and sat for two short speeches, plus 8:46 of silence to mark the length of time George Floyd's neck was compressed by a Minneapolis police officer.

The crowd then made a U-Turn and marched peacefully back up West Liberty Avenue, as cars waited along the many side streets. Small groups of marchers then dispersed through the adjoining side streets. Many passing drivers honked in what appeared to be expressions of support. 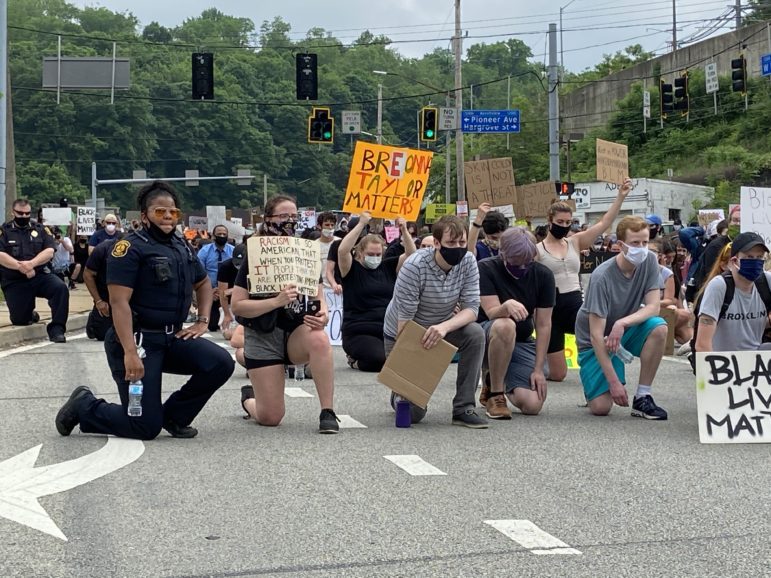 Marchers stopped before the Liberty Tunnel and kneeled during two speeches, and 8:46 of silence to mark how long George Floyd's neck was compressed by a Minneapolis police officer. (Photo by Rich Lord/PublicSource)

The statement by the Damage Assessment and Accountability Taskforce called out the arrest of Matthew Michanowicz, 52, of Duquesne Heights, as a result of the task force’s work. Police allege that Michanowicz left a backpack containing homemade explosives at an undisclosed location on Sunday, which police recovered on Monday. Police say Michanowicz is seen on security camera footage placing the backpack.

“These threats are real,” said Hissrich, citing an active investigation into a Saturday incident in which police allege that “a protester threw an improvised incendiary device at a Pittsburgh police officer near Mellon Square, which exploded on the ground and caused a nearby officer to suffer concussion-like symptoms.”

The press release specified that the task force is investigating looting and vandalism at dozens of businesses and assaults on at least five journalists.

The bureau also restated its commitment to protecting people who are participating in protests and when officers intervene.

“Law enforcement intervenes only when violence occurs and a gathering has been deemed unlawful. At that time, orders to disperse are issued,” according to the release.

The task force indicated that its investigations will use footage from police body cameras, city cameras and private security camera footage.

See more photos of anti-racist demonstrations in Pittsburgh on June 5, 2020: 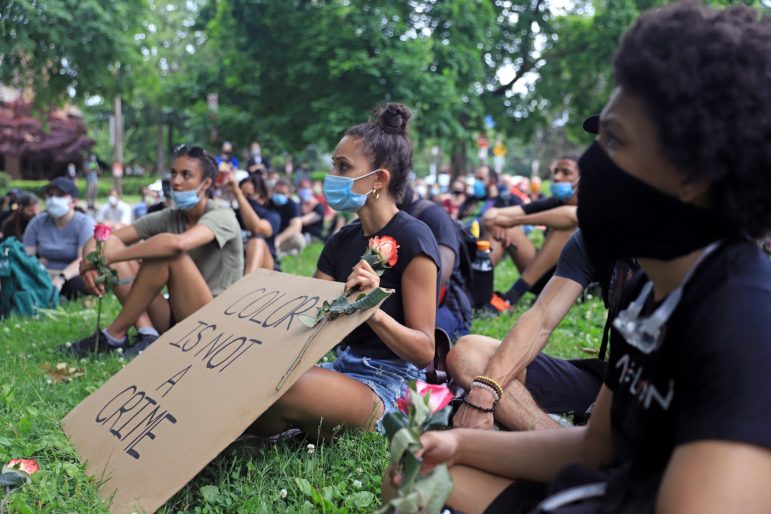 A demonstrator holds a sign that says "color is not a crime" during a demonstration in Lyndhurst Green on June 5, 2020. (Photo by Jay Manning/PublicSource) 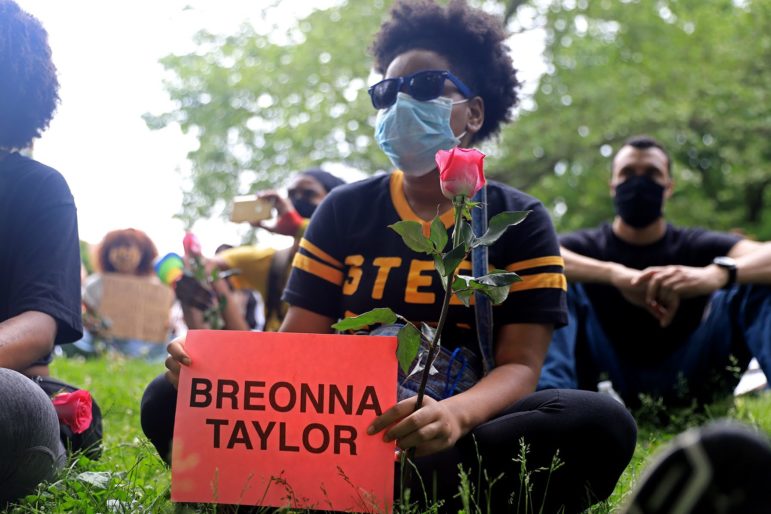 A demonstrator holds up a sign with Breonna Taylor's name and a rose given to her during a demonstration in Lyndhurst Green on June 5, 2020. (Photo by Jay Manning/PublicSource) 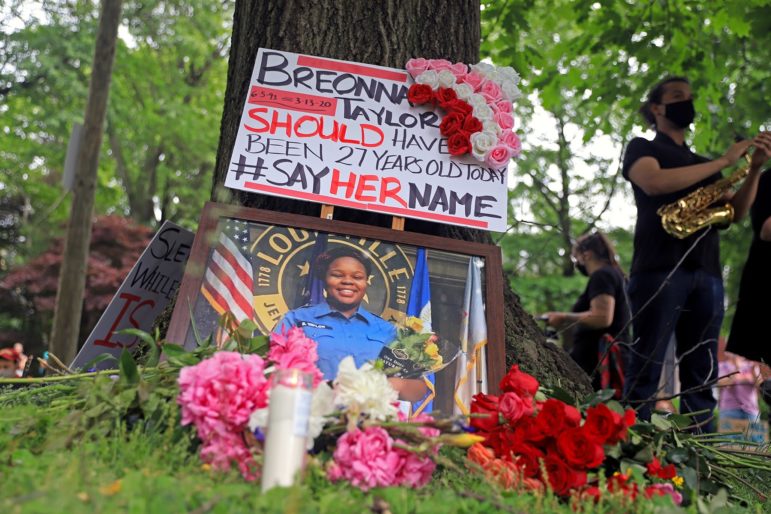 A memorial for Breonna Taylor in Lyndhurst Green, Point Breeze in Pittsburgh. Taylor, who would have turned 27 today, was killed by police in Louisville in March. (Photo by Jay Manning/PublicSource) 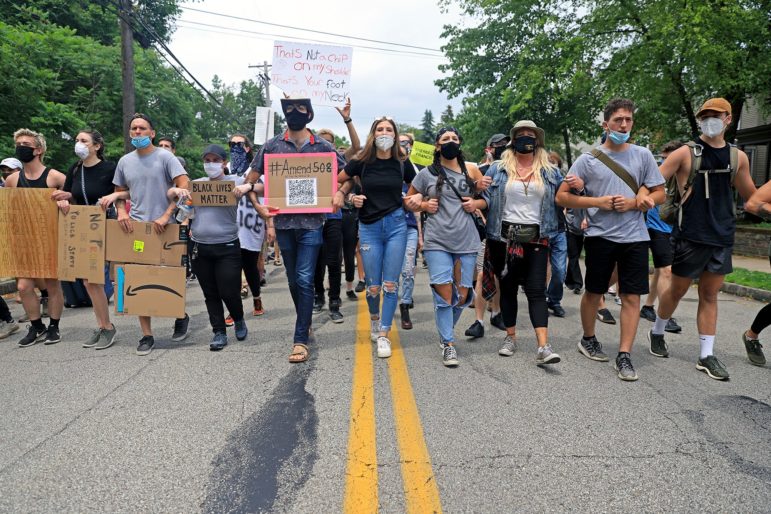 Demonstrators linking arms in a march from Friendship Park to Lyndhurst Green. (Photo by Jay Manning/PublicSource) 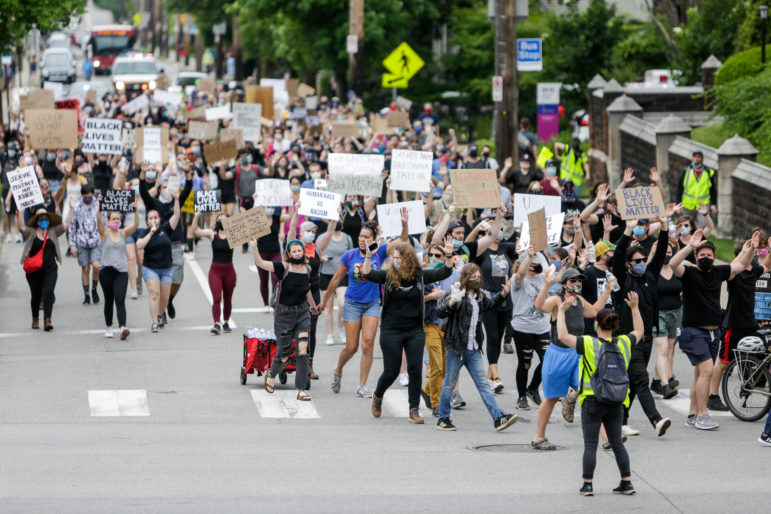 Black Lives Matter protesters at the corner of Fifth and Negley avenues as they march from Friendship through Shadyside and into Point Breeze. (Photo by Nick Childers/PublicSource) 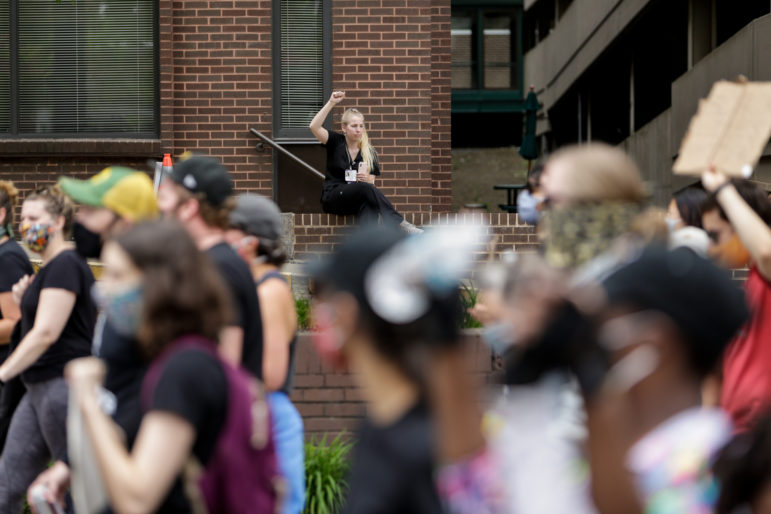 A healthcare worker showing support for protestors during a Black Lives Matter march from Friendship through Shadyside and into Point Breeze. (Photo by Nick Childers/PublicSource) 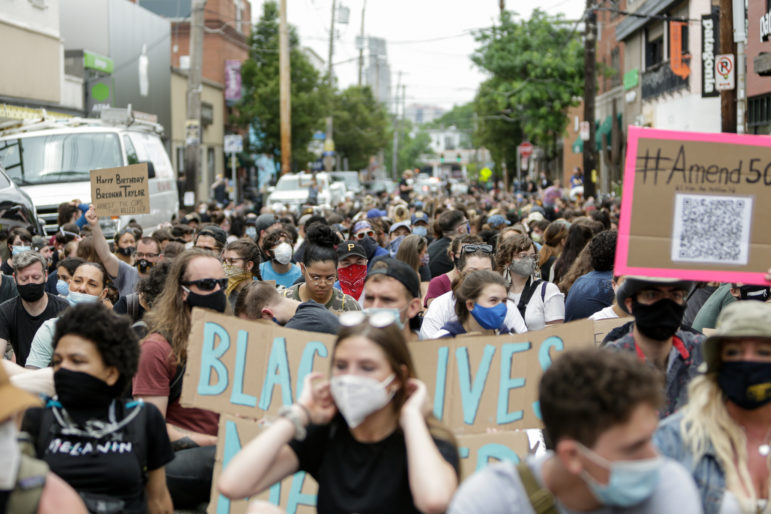 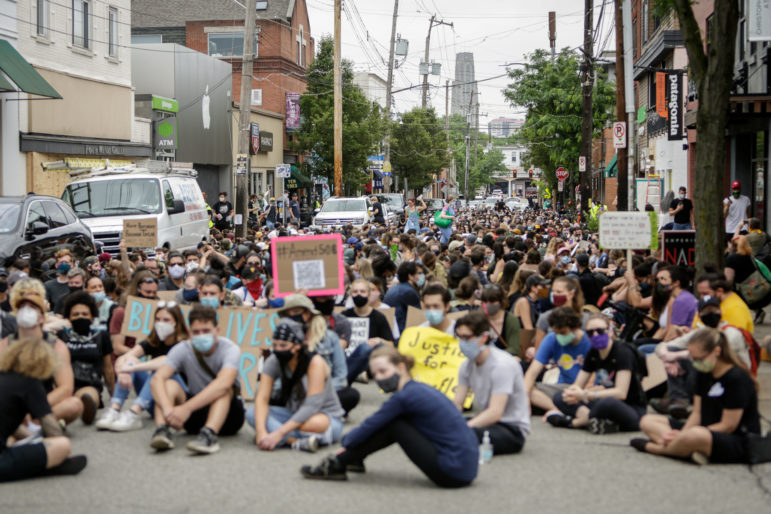 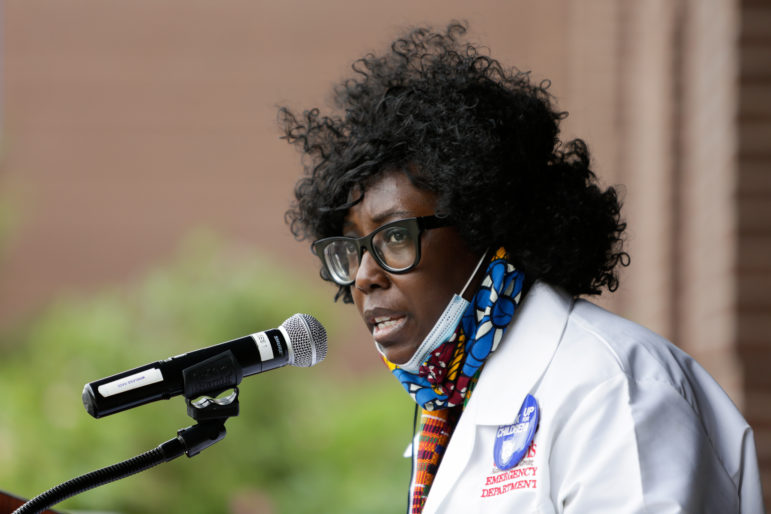 Dr. Sylvia Owusu Ansah from UPMC Children's Hospital speaking during a demonstration by healthcare workers in front of the hospital. (Photo by Nick Childers/PublicSource) 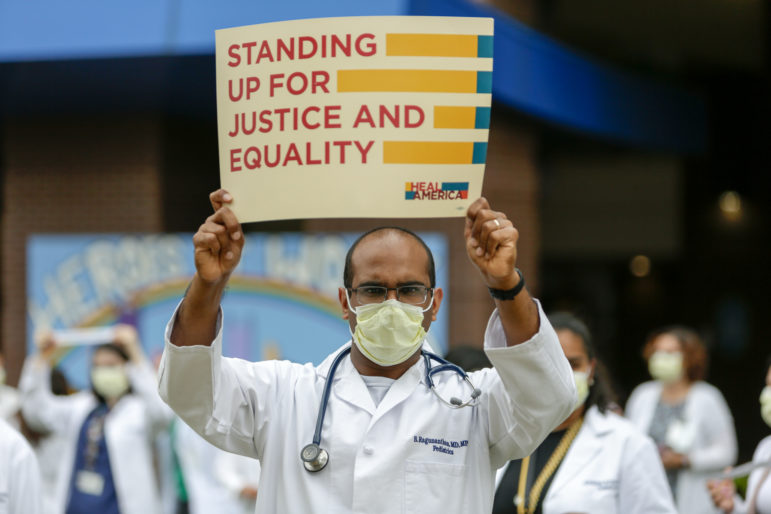 Healthcare workers from UPMC Children's Hospital participating in a demonstration against racism in front of the hospital. (Photo by Nick Childers/PublicSource) 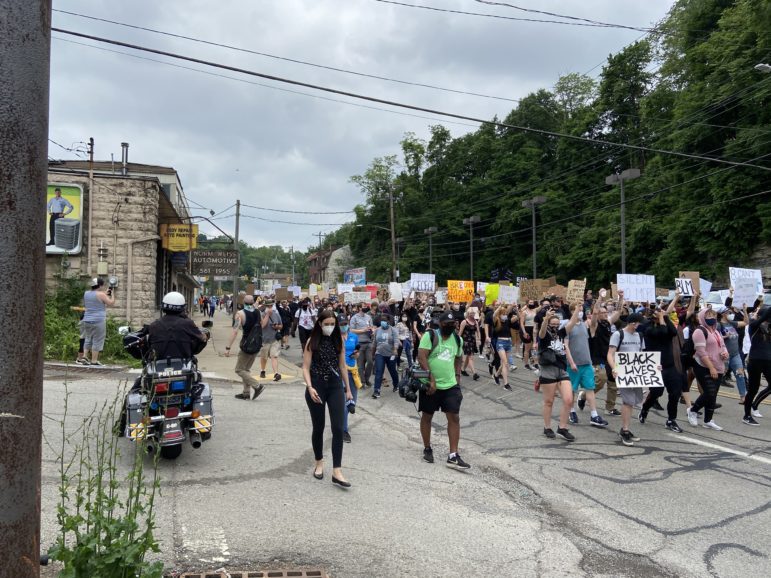 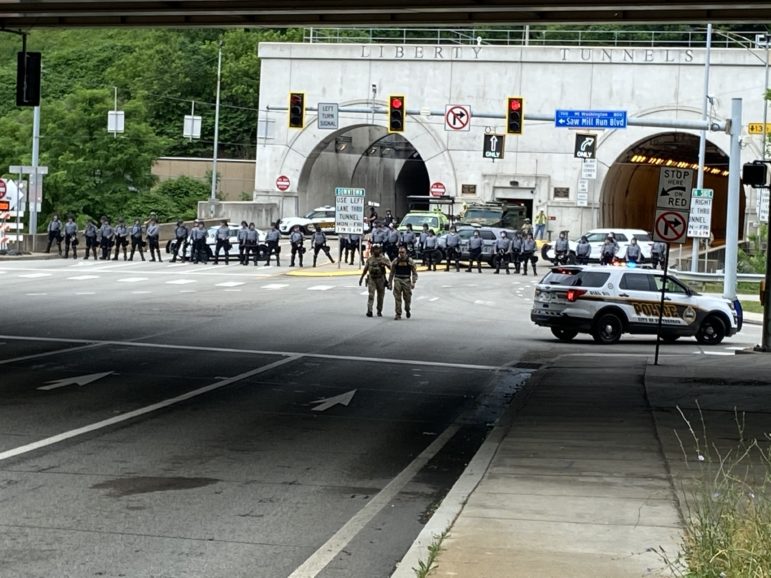