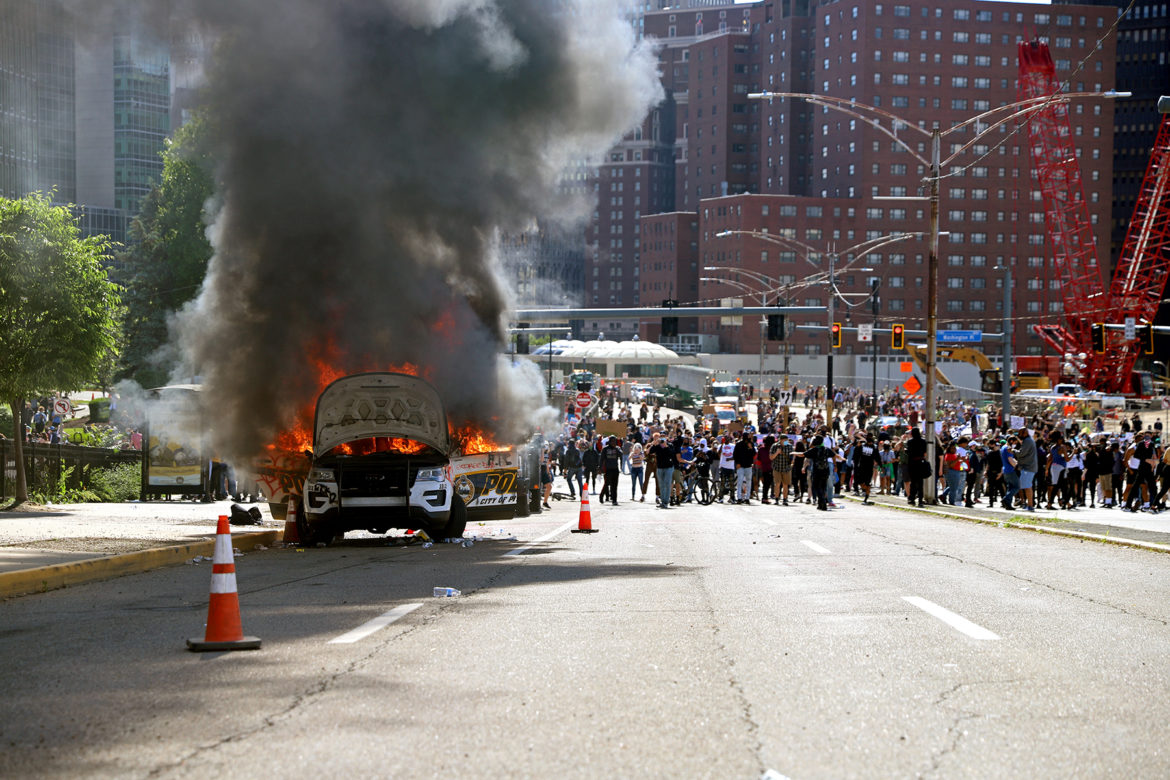 Rioters set a police car on fire Saturday outside of PPG Paints Arena during protests over the killing of George Floyd. (Photo by Jay Manning/PublicSource)

Gov. Tom Wolf affirmed the concerns of the protestors across Pennsylvania responding to the killing of George Floyd and encouraged them to act peacefully on Sunday.

“I urge every one of these demonstrations to be peaceful. I urge everyone to have respect for the communities and our neighbors,” Wolf said in a press conference. “And I urge all of us to continue to call out injustice. We should be doing that.”

Throughout the day Saturday, protestors took to the streets not just in Minneapolis, the site of Floyd’s killing, but across the country. Thousands gathered across Pennsylvania, and in areas such as Pittsburgh and Philadelphia, violence and property damage prompted Wolf to issue an emergency declaration.

The declaration allows municipalities to set curfews and request aid from the National Guard; Pennsylvania Emergency Management Agency Director Randy Padfield said that the National Guard will only be deployed to areas that request it. Philadelphia has requested the help of the National Guard, but Pittsburgh has not yet. The city did set a curfew of 8:30 p.m. to 6 a.m. for last night and tonight.

Wolf plans to end the declaration as quickly as he can, dependent upon the level of violence going forward, he told reporters.

“We usually plan for the worst, but we hope to expect the best,” Padfield said. “We hope that this is what happens tonight across the state, that individuals have the ability to exercise their right to peaceful protest without the fear of violence or property destruction.”

Some activists and government officials have criticized the police response to the protests in Pennsylvania and elsewhere, including Pennsylvania State Representative Summer Lee, who said on Twitter that she saw untoward violence from police.

“The violence I witnessed in Pittsburgh was militarized police responding to water bottles [with] chemical force and rubber bullets,” Lee tweeted.

Wolf said he is proud of the way law enforcement, that he has seen, has handled the situation across the state.

“They are in a really difficult situation and trying to do their best to balance the needs of keeping people safe and allowing people the freedom to protest,” he said.

Wolf offered his condolences to the family and friends of Floyd and identified the demonstrators’ concerns as valid.

“These demonstrations are right on the mark,” Wolf said. “We need to protest injustice. We need to do something about it.”

Matt Petras is a freelance reporter based in the Pittsburgh area as well as a writing and journalism tutor for Point Park University. He can be reached
at matt456p@gmail.com or on Twitter @mattApetras.