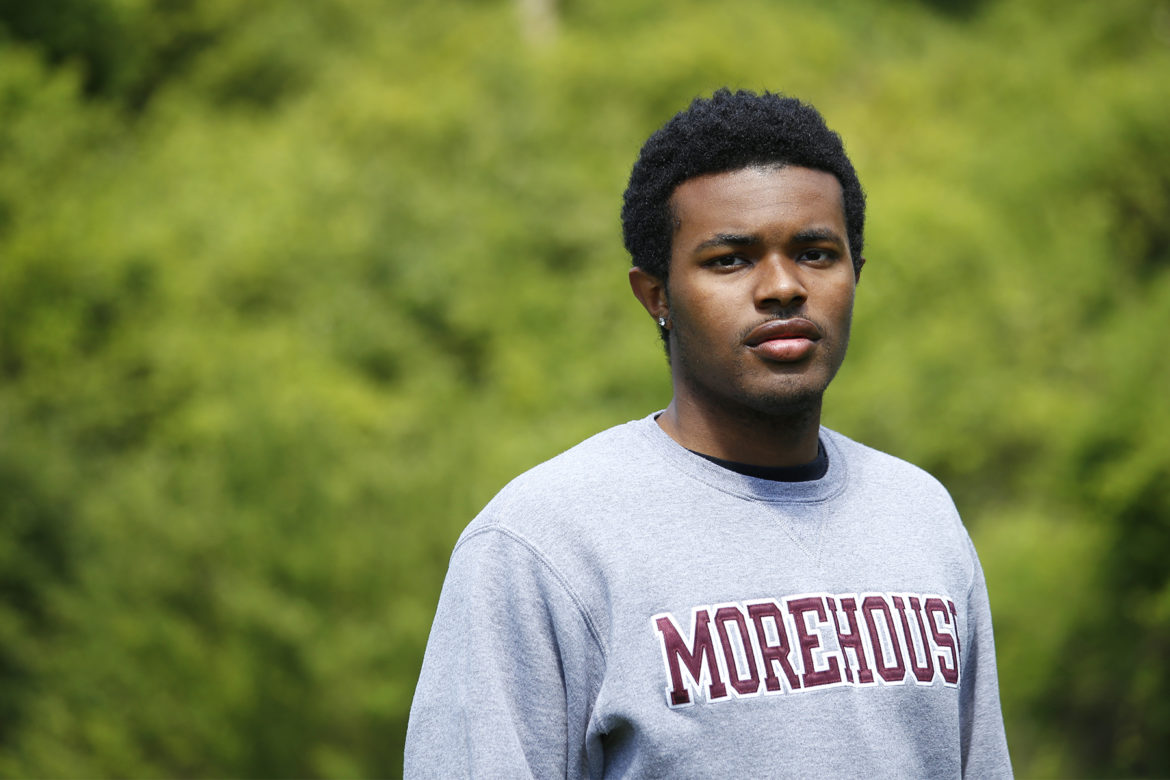 “Watching a Black man executed in broad daylight ripped a hole through my spirit and the video put me into an endless spiral of thought,” writes William Generett. “Through the tears, I attempted to channel my anger into something positive.” (Photo by Ryan Loew/PublicSource)

“To be black and conscious in America is to be in a constant state of rage.” —James Baldwin, author and civil rights activist

This is the perfect quote to describe my reaction to the recent events involving Black men that have taken place during quarantine: a constant state of rage, sadness and hopelessness. Perhaps being able to go out and converse with my friends and peers would help me cope with these events, but unfortunately that wouldn’t help with my healing.

I live in Fox Chapel, a predominantly white community outside of Pittsburgh. Most of my white peers are not capable of having a real conversation regarding race and police brutality. It is very lonely to be smart and Black in Fox Chapel. In a school that does not actively try to fight racism, kids of color constantly have to defend ourselves and what we stand for.

This is not a permanent situation in my life however. In the fall, I will be attending the prestigious Morehouse College, an all-male HBCU in Atlanta, on an academic scholarship. I am beyond excited to study biology on a pre-med track in a community full of intelligent Black men such as myself, but until then I must cope. I must cope with the ongoing pandemic and the ongoing attack on blackness in America.

My phone usage has skyrocketed during my time at home amid the pandemic and, unfortunately, I have developed an unhealthy habit of spending too much time on social media. I have a weird habit of checking Donald Trump’s Twitter account. His delusional and hate-filled tweets are a constant reminder that most of the powerful people in this country are often not on my side. It is a frightening thought that we could have four more years of hateful rhetoric and unchecked white supremacy.

Social media platforms  such as Twitter and Instagram are highlighting the wrongdoings in our society, but they are also fostering platforms that show Black people in horrible situations without any positivity. Coming across a video of injustice while mindlessly scrolling through Instagram is quite common, but the murder of Ahmaud Arbery really took a toll on me.

Watching a Black man executed in broad daylight ripped a hole through my spirit and the video put me into an endless spiral of thought. Through the tears, I attempted to channel my anger into something positive. I put pen to paper and expressed my emotions through Ahmaud’s story. My voice was his voice in the essay and, through his story, I attempted to challenge the hypocrisy in American society that white men with guns could storm state buildings and be unharmed while an unarmed Black man is killed in the street.

I spoke about how Ahmaud’s run through a Georgia neighborhood represented racial progress in America and how the construction site that he visited was a metaphor for the work in progress that was his life. I struggled through every step of the piece — I called it “Run” — but the writing helped with my mental health.

As I round the corner to the street with the construction site, I see an older woman watering her plants. I smile gently at her as I enter the construction site. The house has changed a lot since the last time I was here, but it still has a long way to go. They put up a new wall and what appears to be a staircase. A sink! God is on my side today. Lord knows I needed that drink.

As I sip the uncomfortably warm water, I looked around at the unfinished house. It will be a beautiful house. There is so much potential for growth, and it is not even close to the finished product. As I look around the barren site, I succumb to a moment of self-reflection. At the age of 25, I am also an incomplete product. I am the unfinished house.The sky is the limit.

I am a calm and collected person and my anxiety levels are usually low or non-existent but, during these last few weeks, there have been more tears and fewer smiles. It has become harder to see a light at the end of the tunnel.

Next week, I will be watching my high school graduation from a computer screen. It will be a solemn reminder of a lost senior year. On top of the cancellation of many exciting events, negative images of Black men and women are circulating through the news cycle and social media at what seems like unprecedented rates. 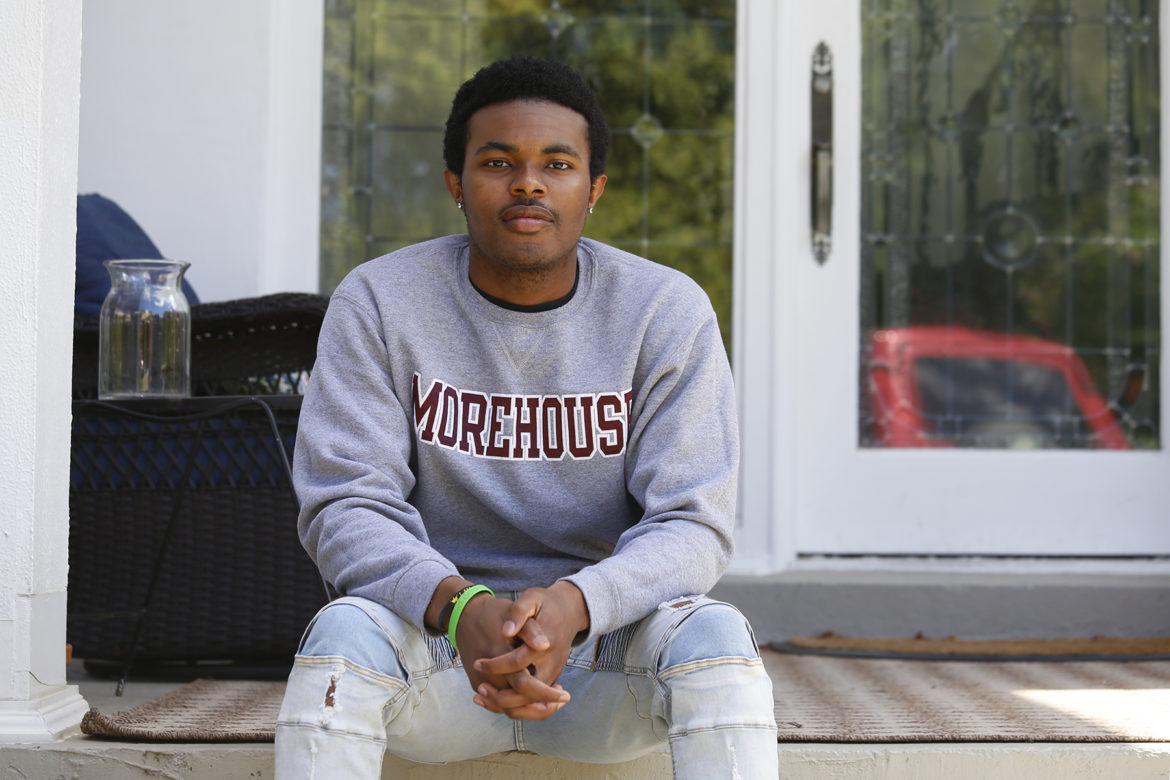 William Generett is a graduating senior at Fox Chapel Area High School and will be attending Morehouse College, an all-male HBCU in Atlanta, on an academic scholarship in the fall. (Photo by Ryan Loew/PublicSource)

I have always known what America stands for, but to see the racism unfold on camera triggers a different type of trauma. The world seems to be getting crazier and crazier each day.

Sometimes words do not help. A few hours after I shared what I wrote in “Run” with a few close friends and family, a hashtag appeared on the Twitter trending list. #GeorgeFloyd rose up the trending list within a few hours. The video showed a white police officer pressing his knee up against Floyd’s neck. The image of Floyd being choked to death by the knee of a white police officer in Minneapolis seared a picture into my brain that has been hard to dispel.

There are no words that I can put on paper to help me understand what happened in that video. No metaphors can accurately describe the burning pit in my stomach. There will be no essay from me about George Floyd.

Young Black men and women like myself are preparing to enter a world that continues to fail the people who look like us. As discussions about mental health ramp up due to the pandemic, light should be shed on the unique issues that African Americans across the United States are dealing with.  Graphic video and audio displays of the racial injustices only add to the stress and anxiety.  Along with the fear that the COVID-19 pandemic has evoked, the lingering uneasiness of being Black in America has risen to new heights.

Sleep has been hard to come by these days as I watch American cities burn amid pandemics of disease and hate.

William Generett is a graduating senior at Fox Chapel Area High School. If you want to send a message to William, please email firstperson@publicsource.org.