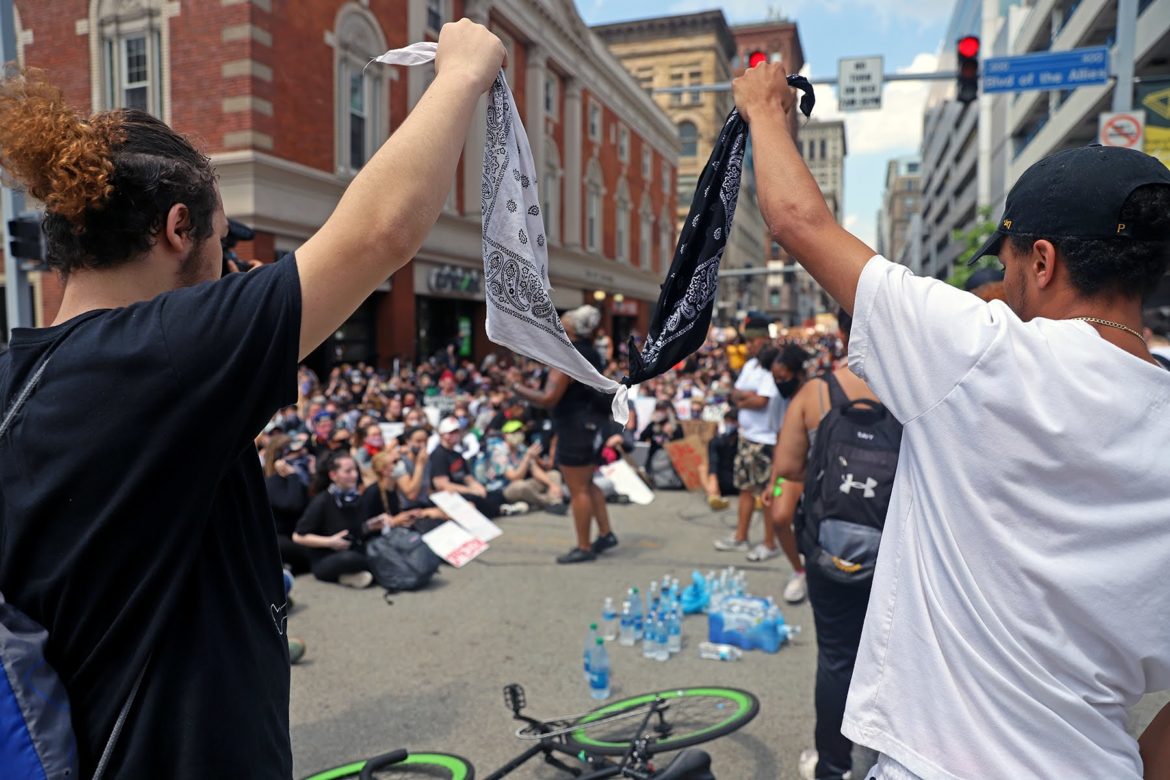 On the sixth day of Black Lives Matter protests in Pittsburgh, Mayor Bill Peduto outlined an agenda and series of specific actions for police reform, some of which, he said, he expects to be enacted in the coming weeks. In a statement Thursday and during an online panel, part of the Office of Equity Series on Equity and Public Safety, Peduto and law enforcement officials discussed a series of policies at both local and state levels.

These calls for reform in Pittsburgh come at a time when the movement to defund police  departments is growing stronger in the U.S. and demonstrators all over the world have been marching for justice in the aftermath of the killing of George Floyd by a Minneapolis police officer on May 26. Officer Derek Chauvin has been charged with second degree murder in Floyd’s death; three other officers have been charged with aiding and abetting second-degree murder.

The mayor’s announcement also comes on the heels of violence between police and protesters on Monday, June 1, in East Liberty. On Wednesday, mayor Peduto said he wants a “full, third-party” investigation. 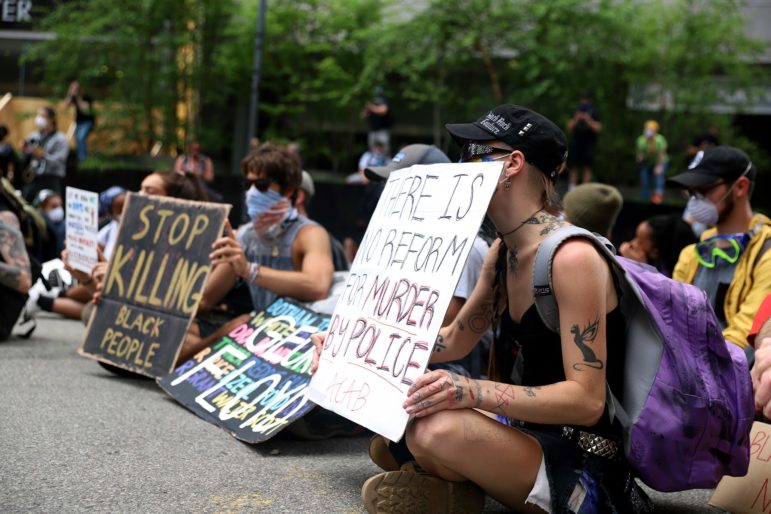 During a press conference Thursday, Peduto stated that “apparently” the use of tear gas on protesters had not been approved by commanding enforcement officers. In a letter to the Office of Municipal Investigations, Peduto outlined a long series of questions and concerns about Monday’s violence.

According to the mayor, Pittsburgh is, along with “a handful of cities” around the country, endorsing an “8 Can’t Wait” campaign that includes specific action points such as clearly defining force and weapons to be used for specific scenarios, explicitly prohibiting chokeholds and strangleholds, and requiring officers to “exhaust all other reasonable alternatives” before using deadly force.

In the online forum later, Police Chief Scott Schubert said that Pittsburgh police are already following many of these guidelines, though he acknowledged that the bureau needs to improve. “We’re the law enforcement,” he said. “We have to set that standard … that bar of ensuring that our officers are accountable, not just for themselves, but for the officers they work with as well.” 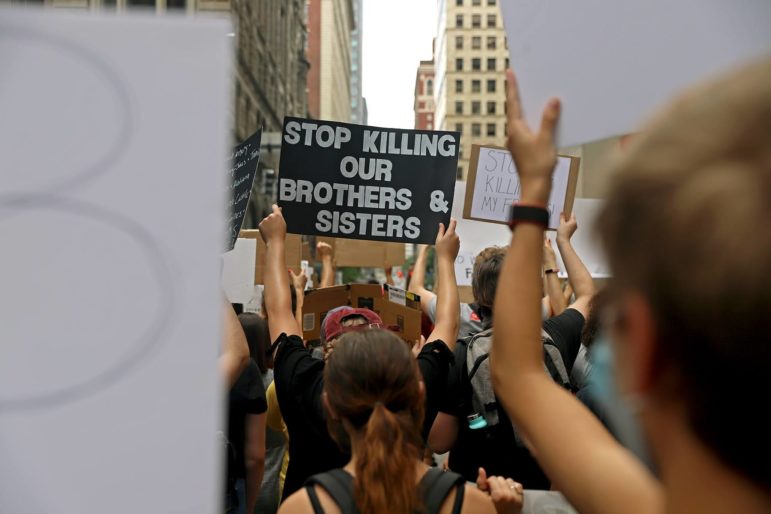 A protest sign during a demonstration against police violence in Downtown Thursday. (Photo by Jay Manning/PublicSource) 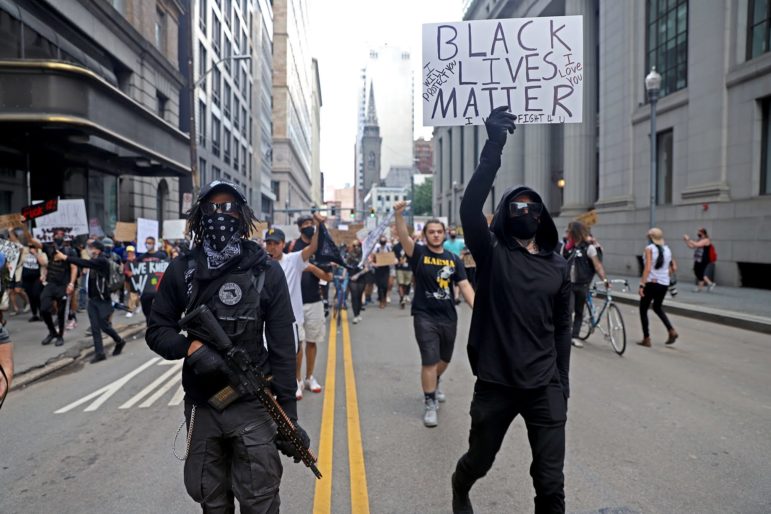 An armed protester in Downtown Thursday during a protest against police violence. (Photo by Jay Manning/PublicSource)

Peduto said he has also endorsed a slate of recommendations put forth by the State Legislature Police Reform Working Group, including the outlawing of choke-holds, establishing an independent review process of police encounters resulting in serious injury or death, and naming an inspector general to systematically review police policies and behaviors. He also renewed his support for use-of-force legislation introduced by state Reps. Summer Lee, D-Swissvale, and Ed Gainey, D-Lincoln-Lemington, that would bar the use of deadly force during arrests, except for protection against imminent threats.

Peduto stressed that “the legislation that’s in Harrisburg is absolutely essential to be passed in order to change that system.” The mayor expressed optimism that a desire for reform exists in all areas of governance, more than he’d witnessed, he said, in his political career. He noted that in the past such reform legislation was usually sponsored by Black legislators and a few white officials, what he called “in itself a model of racism.”

Peduto called for statewide guidelines requiring all police to undergo annual implicit bias and de-escalation training. According to Schubert, Pittsburgh police already complete “several extra months” of related training. He suggested that the Pittsburgh police force is equipped to help support smaller municipalities with such training. 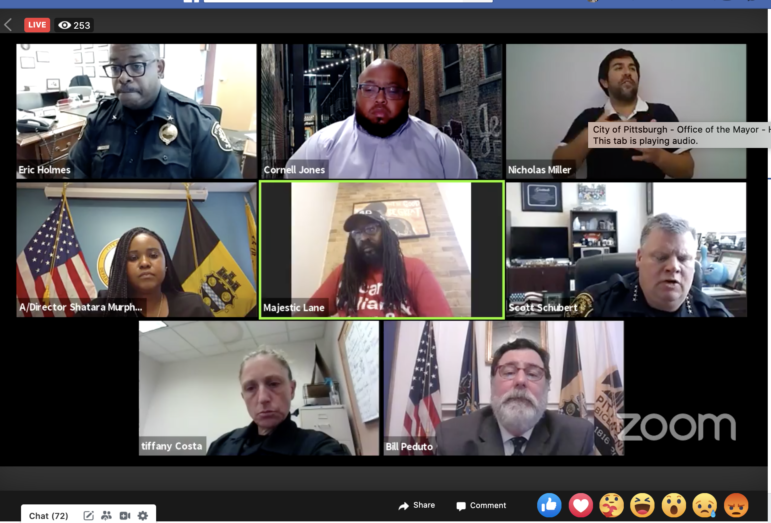 An online forum hosted by Pittsburgh's Office of Equity Series on Equity and Department of Public Safety.  (Screenshot)

Reforms include creating a deputy inspector general within the Pennsylvania Office of State Inspector General that will be tasked with deterring and detecting misconduct in law enforcement agencies under Wolf's jurisdiction. The Wolf administration is also hoping for systemic reforms at the local level, in discussion with government and community officials in Pittsburgh, Philadelphia and other cities throughout the state.

In a statement, the PA State Troopers Association said that Gov. Wolf’s statements today suggest that the commonwealth’s law enforcement community “are no better than those charged with Mr. Floyd’s death.” Wolf emphasized that these reforms are designed to build trust between enforcement officers and the community. 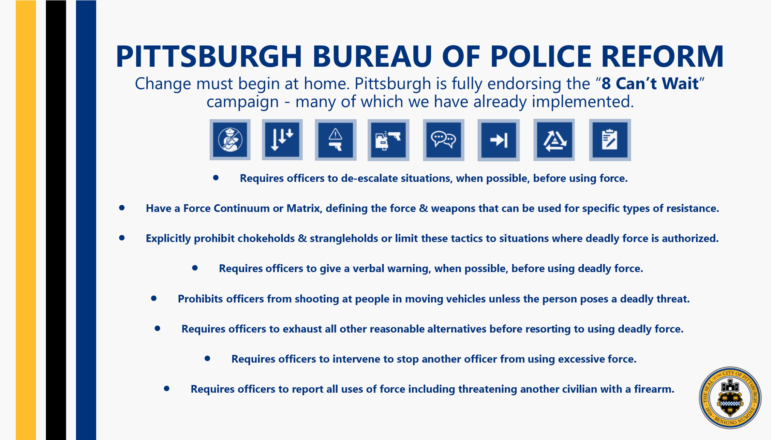 A listing of potential reforms for the Pittsburgh Bureau of Police. (Screenshot)

“We need to address the looming systemic failings that have created this situation,” Wolf  said. “This is not about the police. This is about the broad system of inequities that have sustained racism in the United States and Pennsylvania for too many centuries.”

Attorney General Shapiro in a statement on Thursday said that law enforcement and union leaders gathered by his office have expressed wide support for no longer allowing law enforcement agencies to “unknowingly” hire officers with a history of excessive use of force or other misconduct. A joint statement from more than half a dozen enforcement leaders from throughout the state, including Schubert in Pittsburgh, said: “When [officers] leave an agency, or retire in lieu of termination, that record needs to go with them. We stand united in calling for reform of the hiring process so that law enforcement agencies have the information to make informed decisions about the personnel they hire.” 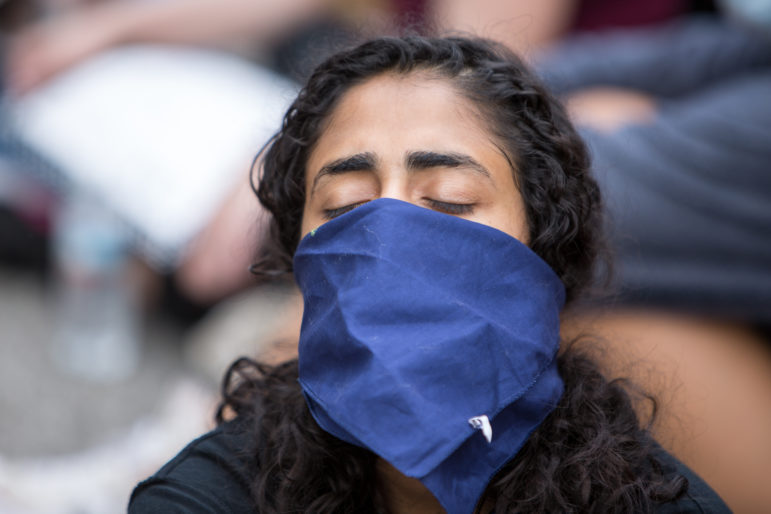 A protester outside the Allegheny County Jail during a demonstration against police violence on Thursday. (Photo by Nick Childers/PublicSource) 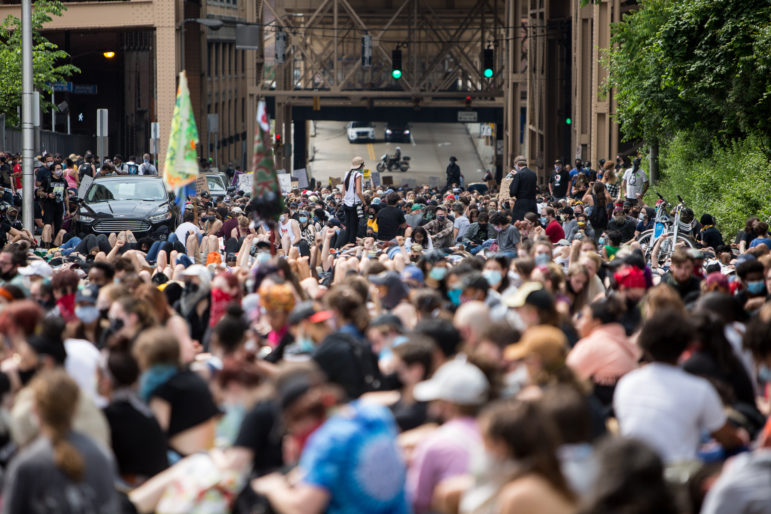 A crowd of protesters sitting in the street outside the Allegheny County Jail on Thursday. (Photo by Nick Childers/PublicSource)

Commander Eric Holmes, who was also a participant in Pittsburgh’s Office of Equity discussion Thursday, served as a city liaison to the Brother’s Keeper Alliance when it was formulated in 2015. He said he works with community partners and law enforcement officers at local institutions, such as at universities and the University of Pittsburgh Medical Center, “trying to stay engaged with the community, listening to their concerns, and really trying to make sure that we carry out the tenants in the 21st Century Policing Report.”

The mayor’s office said it could also eye future reforms, including limiting the scope of bargaining and arbitration for disciplinary procedures and penalties; enabling cities to challenge an arbitrator's decision to allow an officer to return to work; expanding the circumstances under which employers are required to terminate officers engaged in misconduct ; increasing authority to revoke certifications from officers, or the ability to review use-of-force complaints to suspend or revoke certifications. 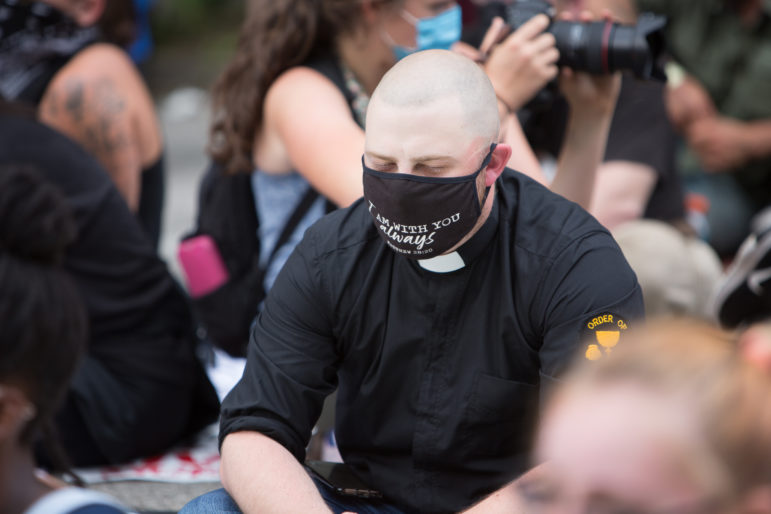 A protester outside the Allegheny County Jail during a Thursday demonstration against police violence. (Photo by Nick Childers/PublicSource) 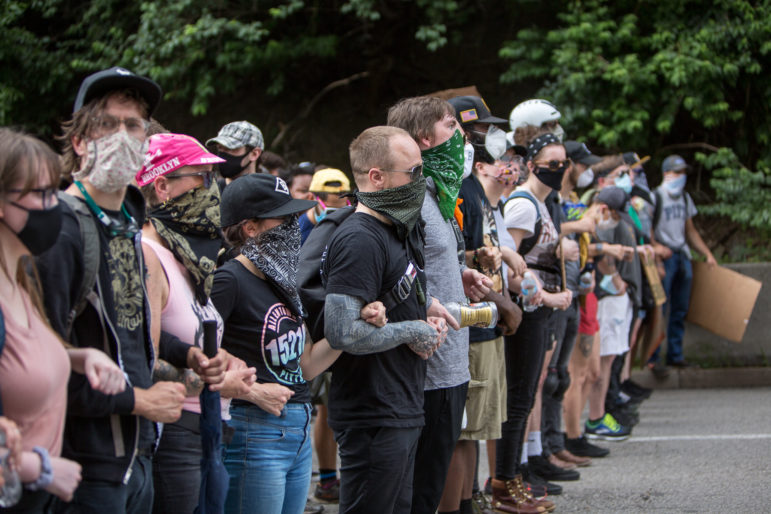 Protesters with arms crossed during a Thursday march from Downtown to South Side. (Photo by Nick Childers/PublicSource)

Several speakers noted the importance of hearing directly from residents.

Shatar Murphy, assistant director of public safety, said that residents can contact her directly with input. Community relations officer Tiffany Kline-Costa said that community resource officers assigned to police zones and neighborhoods are tasked with building relationships with residents and understanding their needs.