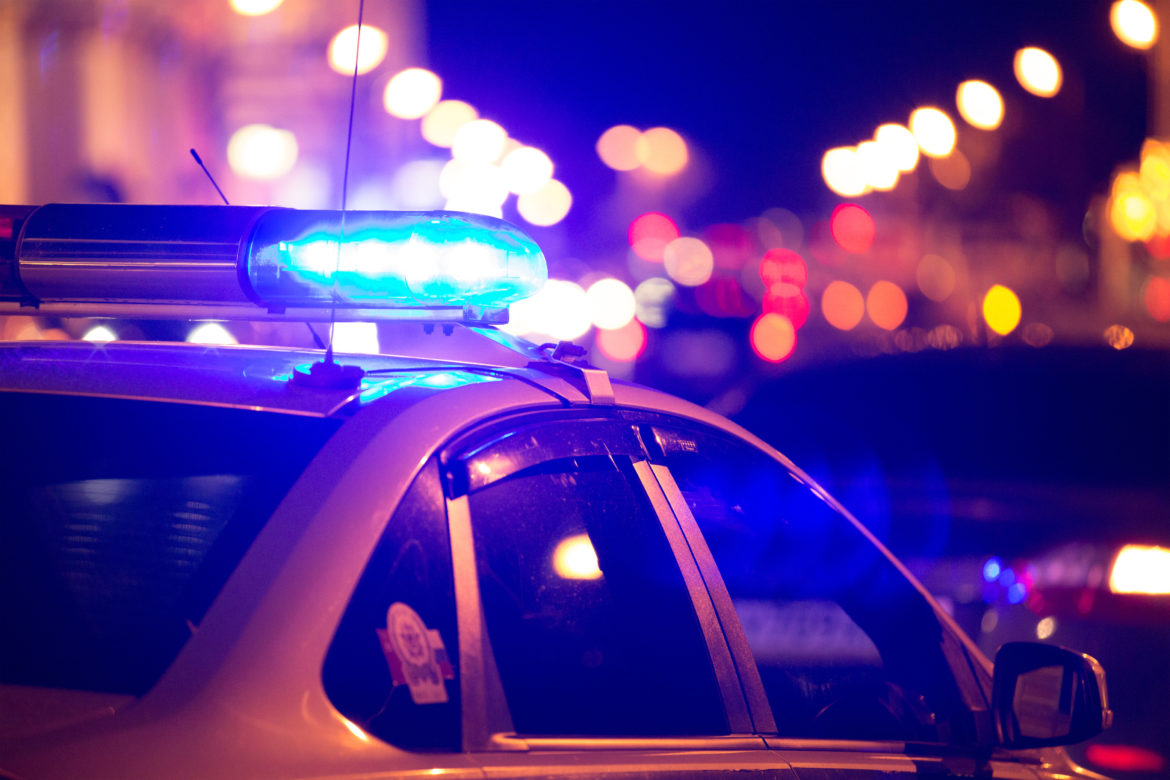 Some states take a hard stance on problem cops.

Take the Kansas officer who claimed to be out on the streets, except a GPS tracker showed his patrol car parked at home. And another officer who backed into a pick-up truck in his cruiser; he claimed it didn’t happen but video from a patrol car showed otherwise.

Both are banned from the profession, not for crimes, but for a lack of “moral character.”

In Arizona, an officer told a fabricated story during a military training weekend about killing two suspects. He lied, so the state barred him from law enforcement.

Jack Lane, recently retired executive director of the Arizona agency responsible for police standards, explains that residents “really have an expectation” that the state keep a high bar for officers.

In Oregon, the state banned a police officer who had sex with a civilian while on duty and destroyed related evidence after being confronted. Another was banned for using excessive force in a traffic stop.

Would Pennsylvania take away their badges?

Only with a criminal conviction.

Because lawmakers gave limited authority to the agency responsible for police certification, Pennsylvania has no oversight over noncriminal findings of misconduct, aside from dishonesty during the certification process.

Rosfeld, who faces trial for criminal homicide, previously resigned from the University of Pittsburgh under threat of termination. He is accused in a July civil lawsuit of fabricating information in a police report, which his lawyer publicly denied.

“It’s an extensive process and certainly has its good qualities and bad qualities.”

If convicted for the shooting, Rosfeld would be automatically banned from law enforcement. If not, he’s legally allowed to continue working as a police officer. That standard trails several other states where a conviction is just one cause for decertification.

Pennsylvania holds its sheriff’s deputies to higher standards than its municipal police officers. Licensed professionals ranging from doctors to barbers are also under more scrutiny.

While Kansas decertified 30 local officers this year (not including deputies and state police), Pennsylvania tallied only 35 decertifications since 2014. And Pennsylvania has nearly five times as many local police officers as Kansas.

Of the 35 decertifications in Pennsylvania since 2014, 32 decertifications were for disqualifying criminal convictions. Of the other three: One officer was decertified for cheating on her police exam, another for lying on his state application. One chief was decertified on a technicality for not holding an active job in law enforcement, though he was also convicted on a low-level misdemeanor for possessing chemical solvent he’d been accused of huffing.

That in itself wouldn’t bar his employment. The threshold for being labeled a problem cop in Pennsylvania is higher than that.

“The only thing is they need to be sure they don’t get convicted of some pretty serious crimes,” said Elizabeth Randol, legislative director of the American Civil Liberties Union of Pennsylvania.

Should conviction be the standard?

Six years ago, Kansas looked a lot like Pennsylvania.

Gary Steed, executive director of the Kansas Commission on Peace Officers’ Standards and Training, explained that his state previously banned cops only when convicted of felonies, or domestic violence offenses.

The state required “good moral character,” but Steed said the rules regarding convictions incentivized officers to plead down more serious crimes to misdemeanors and avoid decertification. Notably, in Pennsylvania, decertification occurs upon conviction of a second-degree misdemeanor or higher.

In 2012, Kansas increased scrutiny, specifying 58 misdemeanors that can trigger decertification. Crucially, the new rules enable revocation even if an officer is never charged. Basically, its process no longer hinges on the criminal justice system. A fact-finding investigation would still be done to determine if misconduct occurred, and the state could move forward with discipline regardless of if an arrest is made. 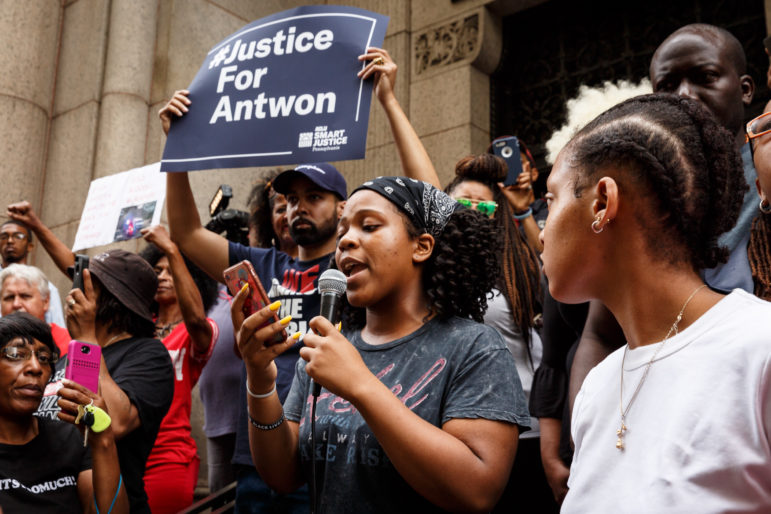 Protestors in downtown Pittsburgh calling for justice after the June 19 shooting of Antwon Rose II. (Photo by Maranie Rae Staab/PublicSource)

The point isn’t whether an officer is a criminal. It’s whether the state can trust them to carry a gun and a badge.

But in Pennsylvania, criminal conviction is the standard.

“Misconduct is really kind of left up to the [individual] department” to investigate, said Lokhaiser, who is not a voting member of the commission.

The responsibility falls on local departments to weed out bad officers and to find out if prospective hires have done wrong elsewhere. MPOETC’s authority is limited to local officers, not state troopers or sheriff's deputies, except for in Allegheny County. The Pennsylvania State Police manage the MPOETC.

The danger, Goldman said, is that an officer may be justifiably fired from one department (or pressured to resign), only to be hired in another town. Maybe the new bosses don’t know about alleged misconduct. Perhaps they don’t care.

He points to the roving career of Timothy Loehmann, the former Cleveland officer who fatally shot 12-year-old Tamir Rice in 2014.

Before Cleveland, Loehmann worked briefly in Independence, Ohio, before abruptly resigning. His personnel file deemed him unfit for duty and unstable emotionally. Several departments passed on hiring him. Cleveland never reviewed the record.

When will PA take disciplinary action?

Loehmann was fired from Cleveland but recently was hired by the small Ohio town of Bellaire, which is about 60 miles southwest of Pittsburgh. The chief there defended the decision to offer him a second chance, though Loehmann ultimately decided not to take the position.

Ohio’s law is similar to Pennsylvania’s in that it hinges on criminal conviction (though at the felony level).

Goldman says a conviction is “clearly too high a bar.”

“It is appalling that people who have already been terminated are able to obtain additional law enforcement positions,” Street said at the July meeting, held in Wilkinsburg after the East Pittsburgh shooting.

McDonough, who previously served as chief in Mt. Lebanon, said local governments may still be wary of making a legal misstep. Wilkinsburg Police Chief Ophelia Coleman explained to lawmakers that she called another department to voice concerns about a new officer who left Wilkinsburg after a brief stint. But any action, she said, is “up to them now.”

Local departments must inform MPOETC when officers are terminated, Lokhaiser said. Besides criminal convictions, officers can be decertified for not maintaining employment under the police certification law known as Act 120.

The commission typically decertifies unemployed officers when they are also convicted of a disqualifying crime, Lokhaiser said.

According to state records going back to 2014, only one officer was decertified solely for being fired by a department. That case involved the former chief of Mahoning who pleaded guilty to a third-degree misdemeanor for possessing a chemical solvent used to get high.

If he wasn’t fired or had been hired elsewhere, the board would not have had the authority to decertify him because the offense itself is not severe enough to be career-ending.

“It is appalling that people who have already been terminated are able to obtain additional law enforcement positions.”

Similarly, Oregon’s Department of Public Safety Standards and Training defers investigations of misconduct by working officers to their home departments (a blindspot investigated in-depth by the Oregonian last year).

“I would be remiss not to acknowledge the huge gaping hole that being secondary creates,” said Linsay Hale, director of the agency’s professional standards division.

But the law, which has been lauded as a model, also has robust power to decertify police who are fired with cause or demonstrate moral failings such as dishonesty. In 2018, Oregon revoked 13 certifications from local officers, based on statistics for closed cases available through Nov. 6. Only two of those revocations were for criminal conduct.

Hickman cautioned that state rules vary, including which types of law enforcement are even covered and the strength of their authority.

“You’ve got a hodgepodge when you look at the 50 states,” he said.

Since 2014, the Pennsylvania Commission on Crime and Delinquency [PCCD] has had decertification authority over the county sheriff deputies through its Sheriff and Deputy Sheriff Education and Training Board. Criminal convictions are one reason for decertification.

But so is firing due to misconduct, which could include perjury or making false statements.

“Misconduct in any form could be considered by the Board,” Derin Myers, the PCCD’s acting executive director, wrote in an email.

In practice though, the board has only revoked certification for deputies for criminal convictions. That’s happened seven times in four years.

MPOETC does voluntarily contribute to a national decertification database, which enables departments outside the state to inquire about problems in Pennsylvania. The PCCD doesn’t. As Myers explained, “due diligence for background checks is the responsibility of the employing agency.” 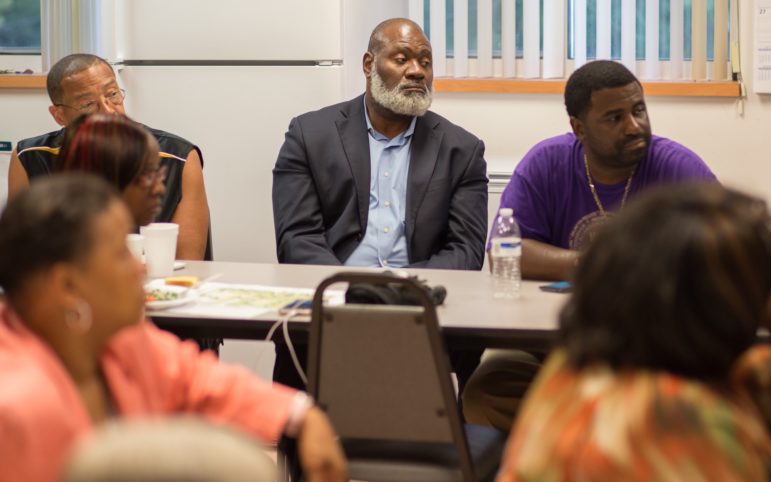 Jake Wheatley, D-Allegheny, plans to introduce legislation next year to create a licensing board to investigate misconduct and set discipline standards.

Steven Williams, a research analyst for the Pennsylvania House Democratic Finance Committee, said the idea is modeled on other licensing organizations, such as those that cover lawyers and barbers.

In Pennsylvania, for instance, barbers can be barred from the profession for being “unethical or dishonest,” if they are “grossly incompetent” or impaired by drugs and alcohol. Not so for police.

Veterinarians, doctors and lawyers have similar rules to barbers, specifically focused on integrity.

Williams said the proposed police licensing board would cover all Pennsylvania law enforcement, though details are still in flux.

Lokhaiser acknowledges constraints MPOETC faces, but he’s hesitant to critique the decertification system. He said his office follows the authority handed down by MPOETC’s commissioners and state lawmakers.