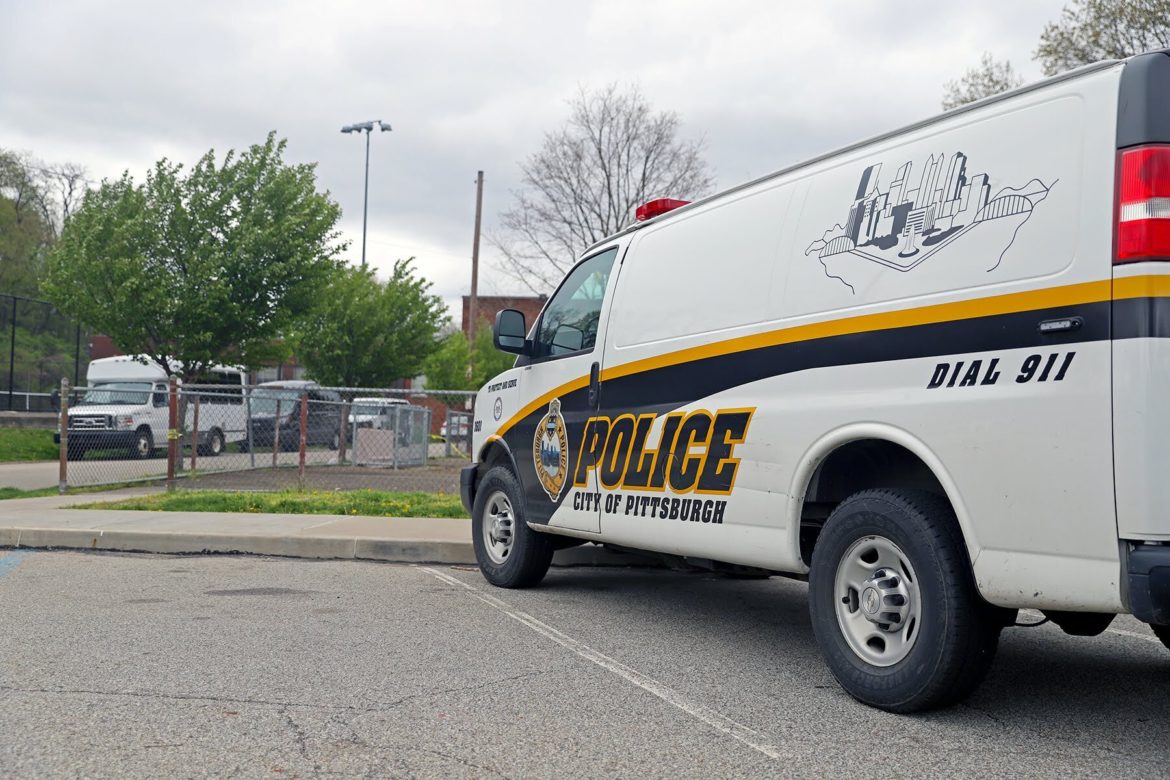 A police van parked at Moore Park in the Brookline neighborhood of Pittsburgh. (Photo by Jay Manning/PublicSource)

As protesters locally and globally cry out against police use of force, Pittsburgh and its police union are in the midst of a legal and contractual tussle over how officers are questioned after they hurt or kill members of the public.

If a Pittsburgh police officer hurt or killed someone today, they could be whisked off for a prompt interview by Allegheny County police, outside of the presence of union lawyers or leadership. That process has been in place since late 2017.

But if a proposed Pennsylvania Labor Relations Board [PLRB] order stands, handling of police-involved "critical incidents" could revert to an older model. Officers who caused "critical bodily injury or death to any person," or fired on someone — and therefore faced potential criminal charges — could then typically wait 48 hours before being interviewed, by their city colleagues, and with union representation in the room.

On May 8, the Fraternal Order of Police [FOP] Lodge 1 won the first round of a two-year-old PLRB case the union brought after the city adopted new procedures for handling critical incidents in late 2017. A hearing examiner found that the city unilaterally changed an agreement it had bargained with the union, and ordered a return to the prior practices.

On May 28, the city filed its statement opposing the examiner's proposed order. After the union responds this month, the three-member PLRB will decide the issue, though that could be appealed to courts.

That unfolding process reflects a bigger trend, said David Harris, a University of Pittsburgh law professor and author of several books on policing.

“What we’re looking at nationally is that for a long time, collective bargaining agreements with police unions have gone beyond the traditional sorts of wages and basic working conditions and so forth, and cities have granted a certain degree of control over the disciplinary process to the unions,” Harris said. He called that trend “one of the reasons that we are where we are as a country.”

FOP President Robert Swartzwelder, a city officer, noted that police can face criminal charges for actions they take on the job, and sometimes an officer who was initially viewed as a witness to an incident later becomes a defendant. That’s why protections are warranted. “A police officer,” he added, “is not subject to a watered-down version of their constitutional rights.” 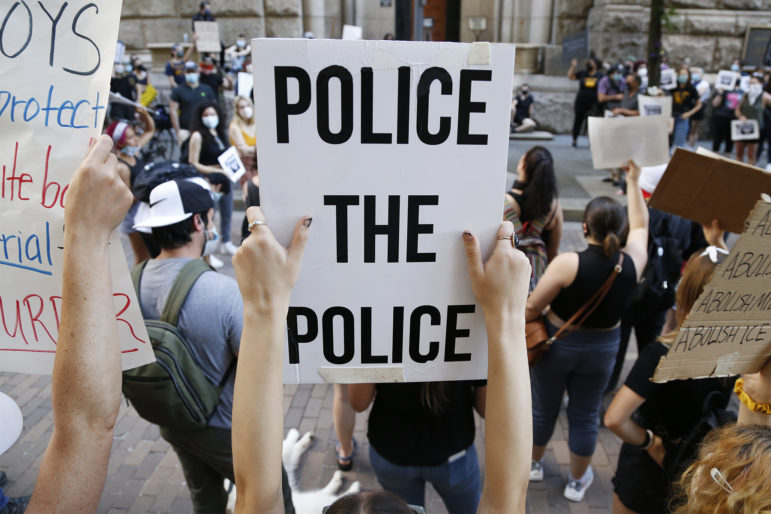 Demonstrators rally outside of the Allegheny County Courthouse on June 8 to protest police brutality and racial inequities in the criminal justice system. (Photo by Ryan Loew/PublicSource)

Rest, representation and an interview with colleagues

Pittsburgh police policy defines critical incidents as those in which an officer, acting in official capacity, hurts or kills a person, intentionally or accidentally. Pittsburgh's bureau logged four critical incidents in 2018, and another four last year.

From 2002 through October 2017, when a Pittsburgh officer was involved in a critical incident, the city’s Violent Crime Unit [VCU] handled the initial investigation, under the supervision of detectives from the Allegheny County Office of the District Attorney.

According to city policy, the VCU interview was typically not to be done “during the first 48 hours following an officer-involved critical incident” unless the chief of police decided to expedite the process, which should only be done on “rare occasion.”

Swartzwelder said the delay “allows for the officer to have 48 hours after a traumatic incident ... to have their eat-and-rest cycle.” He added that the pause “improves your memory, so you make a better, cleaner statement. … You start to remember details, after the incident.”

The city lawyer handling the PLRB case, though, argues that speed is of essence.

"A prompt interview enables law enforcement to have all information necessary to conduct a thorough investigation," wrote Assistant City Solicitor Kelly Mistick, in response to questions from PublicSource. "Given the highly sensitive nature of these investigations, it is also imperative to communicate the facts to the public as soon as possible." The city declined requests for interviews, citing the ongoing PLRB process and potential litigation.

"If you don't have anything to hide, why are you waiting 48 hours?" he asked, when told of the procedural dispute. "Imagine the police showing up at your house, and saying, ‘We've got a warrant,’ and you saying, you need to wait 48 hours." He worried that police could use the time for "everybody [to] get their story straight." 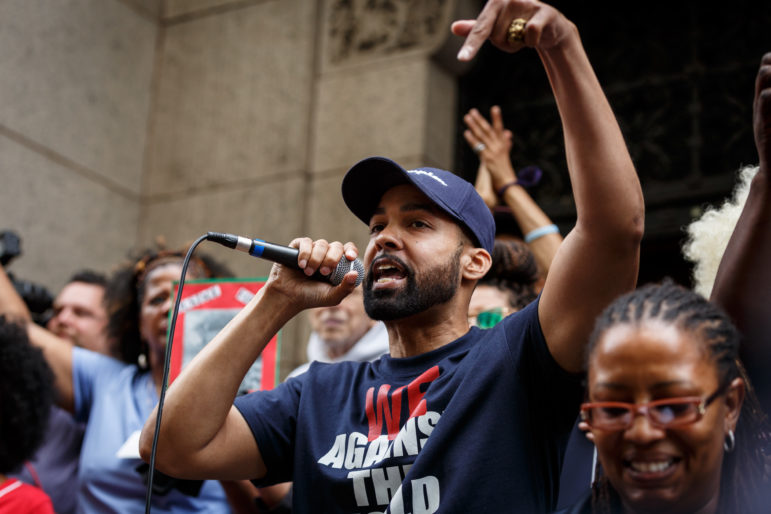 Jasiri X, a hip hop artist and executive director of 1Hood Media, speaks to a crowd gathered on Grant Street in Downtown Pittsburgh during a protest shortly after the death of Antwon Rose II, in 2018. (Photo by Maranie Rae Staab/PublicSource)

Until late 2017, officers could have an FOP representative at the interview.

"It's an absolutely legitimate thing for the union to want to insist upon, from their perspective,” said Bruce Antkowiak, a law professor at St. Vincent College who has served as a federal prosecutor and a defense attorney. "Were I a union representative, what is my purpose if not to seek to help an officer in those circumstances?"

He added, though, that when police are interviewing civilians, they normally “don't want anyone else in the room,” out of concern that the subject will “shade their account” because of the third party’s presence. Harris said that subjects have a constitutional right to demand the presence of their attorney — but not their union representative.

Swartzwelder said he doesn’t want to “interrupt” a critical incident interview “in any way, shape or form.” But he said he can sometimes be helpful to investigators, because he knows city processes. “I might write some questions and hand them to the investigator and ask them to ask them.”

A grand jury, a change — and a reversal

That system — interviews by city detectives, with DA detectives and a union representative in the room, usually 48 hours after an incident — was stressed by two 2017 incidents. In January 2017, two officers fatally shot Christopher Mark Thompkins, 57, at his Larimer home. And that April, an officer shot — but didn’t kill — a person at a Sunoco station in East Liberty.

In the wake of those incidents, city and county officials met with the union in October 2017 and presented a new, draft plan, according to the hearing examiner’s proposed order. In the new plan, when a city officer was involved in a critical incident, county police would conduct the interview, promptly, without union representation. Swartzwelder objected, but the following January 2018, the new procedure was implemented following a critical incident.

A month later, in February 2018, the FOP filed an unfair labor practices charge, spurring the PLRB process. In last month’s proposed order, the hearing examiner found that because the city had, at times, negotiated critical incident policies with the FOP, it could not unilaterally change them.

The hearing examiner wrote that the city "certainly has a significant and compelling interest in ensuring transparency of government and furtherance of the public trust, especially in such highly traumatic and emotionally charged circumstances involving these critical incidents." But the city, he added, "is still bound by the agreement it reached with the FOP," with regard to procedures.

The hearing examiner found that "in 2015 or 2016," the city and the FOP negotiated amendments to the critical incident investigation process, which were implemented in March 2016. That made the investigative process part of the collective bargaining process, so the city couldn't unilaterally change the process, according to the proposed order.

The city, in its May 28 filing with the PLRB, has responded that critical incident protocol comes under its "non-bargainable managerial rights," and that the union's "actions and attempts at obstructing investigations during 2017" justified the changes.

Until the full PLRB decides, the city can continue to assign county police to interview city officers, promptly and without union representation, Swartzwelder confirmed. He added that the union and the city are discussing potential resolution of their dispute.

Swartzwelder said the union recognizes that the city currently has the contractual right to subcontract out some public safety work — as it did in asking the county to handle critical incident probes. He added, “We’re trying to get [the city’s power to subcontract] out of” the next contract, which would start in 2023.

“If [the administration wants] to farm [critical incident probes] out to the county, that’s fine,” he said, “but the county was violating our procedures.”

The city and the FOP are wrestling over critical incident investigations in part because Pennsylvania law does not address the issue. State Act 111, which governs municipal bargaining with police and firefighter unions, does not mention discipline, though it explicitly allows collective bargaining over "terms and conditions of their employment.”

Mayor Bill Peduto, in a June 4 press release, endorsed a list of reforms that "could include" changes in Act 111. He’d like to limit the ability of unions to bargain over disciplinary procedures and make it harder for unions to reinstate fired officers deemed "adverse to the public interest."

Act 111, though, could only be changed by the General Assembly, and police and firefighters would likely lobby hard to defend it or respond with their own amendments. “If they open up Act 111, remember, that opens it up for both sides,” said Swartzwelder. For instance, he’d like to see a provision that allows public safety unions to go on strike if municipalities fail to settle within a year of the expiration of a contract. (Police and firefighters can’t currently strike in Pennsylvania.)

Proposed reforms announced by state Senate Democrats on Wednesday do not include changes to Act 111, but call for the appointment of special prosecutors when officers shoot people.

Without new legislation, the state remains a patchwork of ad hoc approaches to critical incidents. That’s the norm nationally, according to Harris, though a few states have started to regulate such investigations. Wisconsin law, for instance, requires that critical incidents be investigated by independent agencies and allows the state Division of Criminal Investigation to conduct such probes and then make recommendations to prosecutors. 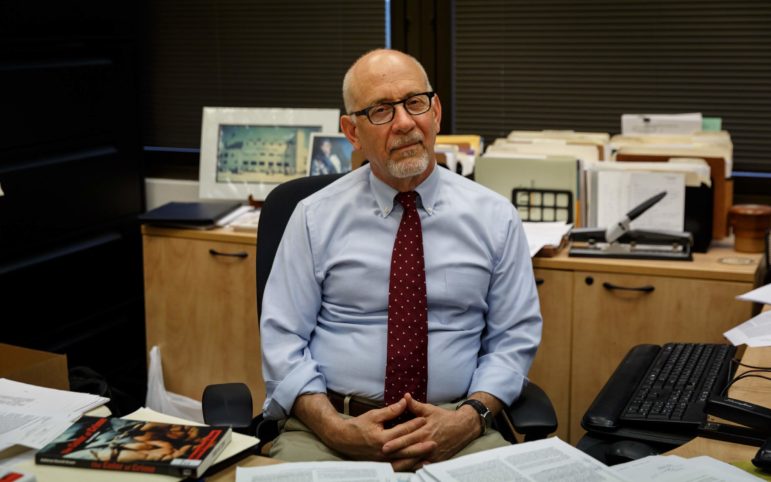 David Harris is a University of Pittsburgh law professor and author of several books on policing. (Photo by Maranie R. Staab/PublicSource)

State Auditor General Eugene DePasquale on Tuesday proposed a similar approach to serious police-involved critical incidents. “We probably should bump it up to the attorney general,” he said, during a press conference, in response to a question from PublicSource.

"The attorney general is independently elected,” DePasquale explained. “You have to have people that are independent making these assessments.” County district attorneys are also elected, but he noted that they have close working relationships with local police departments.

Recounting the May 25 death of George Floyd under the knee of fired and criminally charged Minneapolis police Officer Derek Chauvin, Jasiri X warned that a reversion to less accountability in critical incidents could lead to the kinds of tragedies that bring more unrest.

"This will actually lead to more protest, more police violence,” he said, “and we could possibly see the destruction we've seen in Minneapolis."