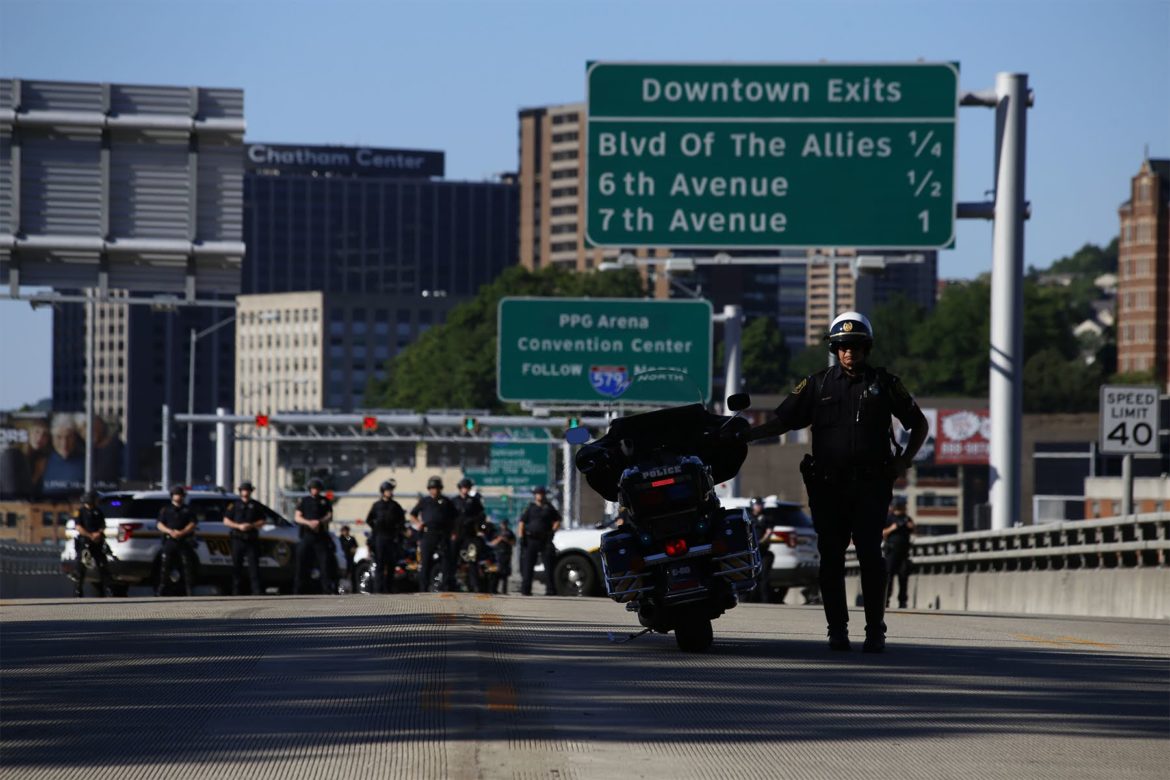 A police officer on the Liberty Bridge watches as protesters proceed down P.J. McArdle Roadway from Mount Washington en route to Downtown Pittsburgh on Sunday. (Photo by Ryan Loew/PublicSource)

Officials in Pittsburgh, Allegheny County and Pennsylvania proposed several reforms on Tuesday to address the burgeoning demand for accountability on police and the criminal justice system as a whole.

On the day that George Floyd was being put to rest in his hometown of Houston, Texas, and 11 days into an intensified anti-racism movement throughout the Pittsburgh area, the Pittsburgh City Council introduced several bills to reform public safety and policing.

Council members also heard from more than 10 residents, calling for council to reform or defund the Pittsburgh Bureau of Police. Among those who spoke were two firefighters, a researcher and a mental health professional.

Garfield resident Douglas Weaver, a 13-year veteran of the Pittsburgh Bureau of Fire, said he has witnessed racism and unnecessary use of force working alongside Pittsburgh Bureau of Police officers in the field. “The time has come for broad systemic changes in our city’s policing,” Weaver said, urging council to look to Minneapolis as a model. On Sunday, Minneapolis City Council pledged to dismantle the police department and replace it with a new model of public safety.

The bills are expected to be discussed at the June 17 meeting.

Councilman Bruce Kraus introduced a bill that would authorize up to $25,000 to the Pittsburgh Citizen Police Review Board [CPRB] to enter into a contract with the Densus Group, a national consulting company managed by military veterans that specializes in training in areas including use of force, risk management and decision-making. The firm would provide input on police-citizen relations and the Pittsburgh police bureau’s use of force.

The bill raised criticism from residents and concern from other members of council.

Jay Yoder, of Morningside, strongly urged the council not to hire the Densus Group. “Can you not look around and see that we are hungry for change?” said Yoder, who described being pepper-sprayed at a recent protest. “We are asking to divest, to demilitarize — not to consult with a military group.”

Councilwoman Deb Gross said she supports allocating additional resources to CPRB but had “deep concerns” because she did not know a specific firm had been chosen.

Kraus said he introduced the bill at the request of Elizabeth Pittinger, executive director of CPRB, who asked for more resources to “assist with the rearranging and re-prioritizing” of existing police priorities and suggested working with Densus Group.

“We don’t need outside consultants to tell us that the police-community relationships are in crisis. I feel it every day. Black Pittsburgh feels it every day,” said Burgess, who called the bill “irrelevant.”

Kraus said he will take up the bill for discussion at the June 17 meeting, allowing time for him and Pittinger to have individual conversations with council members about the proposed legislation.

"Black Pittsburgh feels it every day."

During the public comment portion of the meeting, Alexandra Allen, of Squirrel Hill, was one of several residents who called for redirecting police funding to other services like community crisis response units, mental health services and affordable housing. “Especially given that the city is experiencing massive shortfalls in tax revenue due to the COVID pandemic, our increasingly limited resources would be better spent on things that will improve public safety without relying on armed police,” Allen said.

Council’s agenda included introduction of legislation that would ban, within the county, the use by anyone of tear gas, flash bang grenades, rubber bullets, beanbag rounds and similar less-lethal equipment that police sometimes deploy to control protests.

One of the council sponsors, Bethany Hallam, considered a push for an immediate vote, rather than the usual referral to a committee for consideration. She deferred when she learned that council members had received only about 50 of the 288 public comments submitted on the bill. Instead, the bill was referred to council’s Health and Human Services Committee.

Outside of council’s meeting, County Executive Rich Fitzgerald applauded the sustained and peaceful protests, but did not endorse the ban on less-lethal equipment.

“I don’t think legally, you have the authority to do that,” he said. “Because that’s something the state would have to [do]. We don’t have regulation power when it comes to local police departments, so we would have to take a look and see what can move forward from there.”

Fitzgerald has veto power over council legislation, though a supermajority can override.

Council member DeWitt Walton then sought to pull from committee a proposed ordinance that would create an independent police review board. The legislation — similar to a bill that failed last year — was referred to the Public Safety Committee in February, but has not been sent back to council for a vote. Walton’s motion to bring it to the floor for a vote failed, winning just five of a potential 15 votes.

"The lock-them-up-and-throw-away-the-key approach ultimately caused more problems than it solved," DePasquale said in a Tuesday morning news conference conducted via Zoom. His report recommends, among other things:

Juliette Rihl is a reporter for PublicSource. She can be reached at juliette@publicsource.org or on Twitter @julietterihl.

The story was updated at 7:30 p.m. June 9 to include what occurred at the Allegheny County Council meeting.