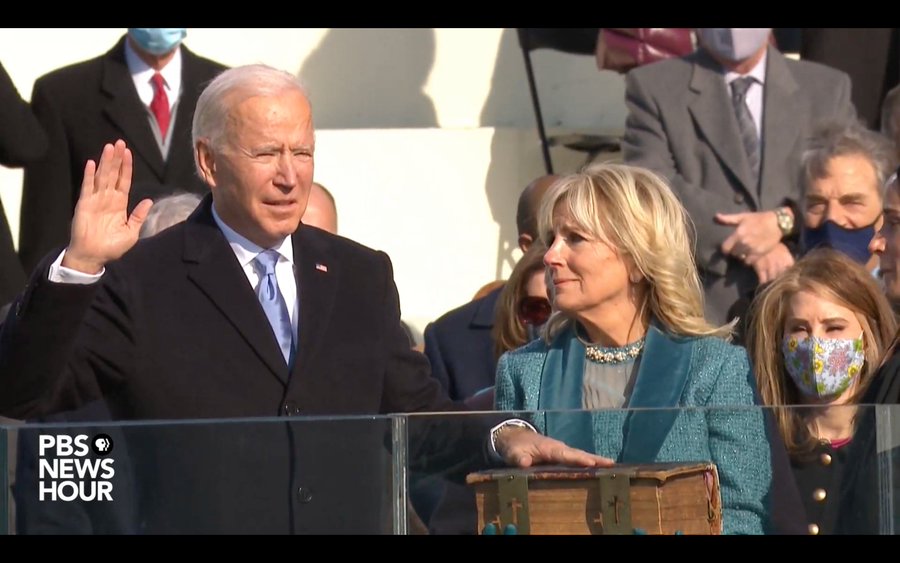 Hours before Joseph R. Biden would be sworn in as America’s 46th president on Wednesday, thousands of flags swayed and fluttered in darkness on the National Mall. The flags dot the grounds in place of Americans who were unable to travel to Washington, D.C., for the inauguration due to the ongoing COVID-19 pandemic and increased security threats.

It was an unusual start to mark a momentous shift in American leadership.

Safety concerns have heightened in the days since pro-Trump rioters stormed the U.S. Capitol on Jan. 6 while lawmakers certified Biden's win in the November 2020 election. To boost security during the inauguration, 25,000 National Guard troops were deployed.

Follow PublicSource throughout this historic inauguration day for updates as we share here stories, perspectives and more from the local, state and national vantage points. 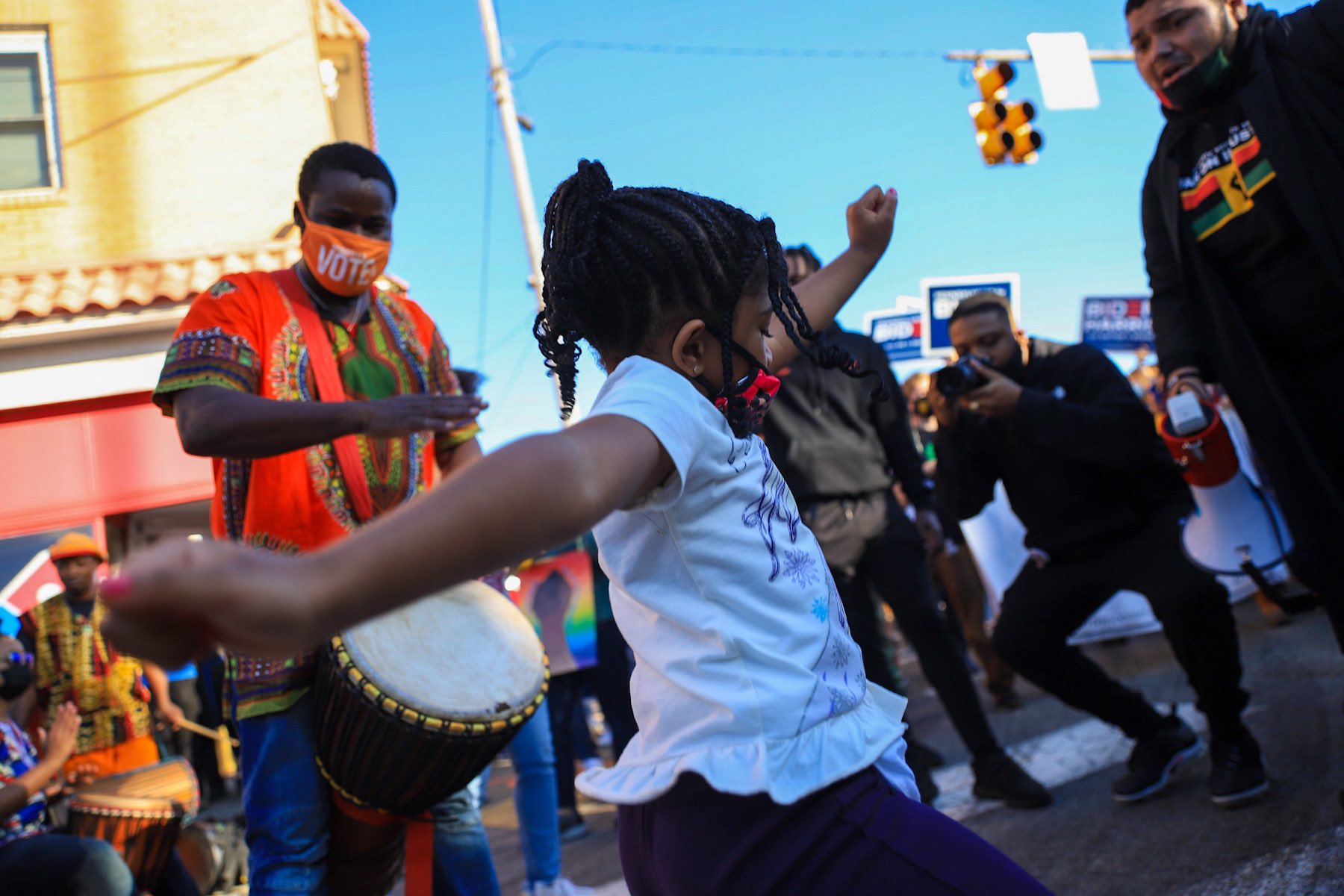 On Nov. 7, 2020, people celebrated and danced on the corner of Carson and 10th streets for the “Count On Us” rally and march. After days of delays and false claims about voter fraud, news organizations called the presidential race for Joe Biden. (Photo by Jay Manning/PublicSource)

The 59th presidential inauguration opened with a brief speech by Sen. Amy Klobuchar who marked the day as a celebration: “We pledge today to never take our democracy for granted as we celebrate its remarkable strength. We celebrate its resilience, its grit,” she said.

The swearing-in ceremony is scheduled to begin at noon. The hours leading up were quieter than usual, without masses of crowds piling together to get peeks of the new president.

A few hours prior, President Donald Trump gave a brief speech at Joint Base Andrews before leaving on his final Air Force One flight as president to Mar-a-Lago, his Florida residence. In Trump’s remarks, he thanked his supporters and, while he didn’t mention President-elect Joe Biden and Vice President-elect Kamala Harris by name, he wished the new administration “great luck and great success."

“I think they’ll have great success,” he continued. “They have the foundation to do something really spectacular.”

He concluded his remarks saying, “Have a good life. We will see you soon.”

“Have a good life,” President Trump said to a small crowd of his supporters at Joint Base Andrews before boarding Air Force One for the final time, as “YMCA” by the Village People played over the speakers.

He vowed that “we will be back in some form.” https://t.co/afGfULL33l pic.twitter.com/NDx0lMO1D0

With his left hand atop a 5-inch thick, 127-year-old brown leather-bound Bible and his right fingers pointed toward the sky, Joseph R. Biden became the 46th president of the United States on Wednesday, just minutes before noon.

And it's official. A few minutes ago Joseph R. Biden Jr. was officially sworn in as the 46th president of the United States. "This is America's day. This is democracy's day; a day of history and hope, of renewal and resolve..." Biden begins his first remarks as president. pic.twitter.com/Llvd8T2WGc

In his first speech as president, he promised to be a president “for all Americans” and acknowledged the ongoing and layered challenges the country faces, from climate change to deep racial and political divisions following the Trump presidency.

“I know the forces that divide us are deep and they are real, but I also know that they are not new,” Biden said. “Through struggles, sacrifice and setbacks, our better angels have always prevailed. In each of these moments, enough of us have come together to carry all of us forward. And we can do that now. History, faith and reason show the way of unity. We can see each other, not as adversaries but as neighbors.”

Biden took a moment of silence during his speech, an acknowledgment of the 400,000 Americans who have died nearly one full year into the pandemic.

At the close of Biden’s remarks, Singer Garth Brooks performed Amazing Grace, asking the crowd – both in D.C. and at home – to join in the stretch of chorus.

Though many couldn’t travel and attend the inauguration in person, local politicians have congregated on social media to congratulate and comment on Biden, Harris and Wednesday’s events.

City Councilman R. Daniel Lavelle of District 6 went a bit further to say, “We just watched the transition from indecency to decency.”

Mayor Bill Peduto shared a photo of himself with Biden, both dressed in the aviator sunglasses Biden often wears:

State Rep. Ed Gainey, who announced Tuesday he will challenge Peduto to become mayor of Pittsburgh, wrote, “Let this be the day we celebrate each other in the name of Unity.” He continued, “This country is definitely in need of it.”

Today a scrappy kid from Scranton will become the 46th president of the United States.

Congrats @PresElectBiden. Looking forward to getting to work rebuilding our economy, fighting the spread of COVID-19, and realizing the vision of a better future for everyone. #InaugurationDay pic.twitter.com/bb8DRJm0JV

The state’s Twitter account playfully congratulated Biden, a Scranton native, with a meme of “How it started” and “How it’s going,” with photos of him in Scranton as a child and in Washington, D.C., taking the presidential oath of office.

How it started: How it's going:

I urge the president to follow through on this commitment by working with members of Congress from both sides of the aisle to pursue policies that will lead to peace and prosperity for all Americans. I am praying for President Biden and his success in leading our country forward.

U.S. Rep. Conor Lamb thanked Biden “For all you've taught me. For keeping the faith & taking on this great challenge. For having the courage to lead us at this perilous time.”

As President @JoeBiden is sworn in, I just want to say thank you.

For all you've taught me. For keeping the faith & taking on this great challenge. For having the courage to lead us at this perilous time.

We're counting on you to succeed. And I'll do everything I can to help. pic.twitter.com/Gq7zePX1CA

While she didn’t tweet on the morning of inauguration day, Dr. Rachel Levine, Pennsylvania's secretary of health released a statement Tuesday about her nomination to the Biden Administration to serve as Assistant Secretary of Health at the Department of Health and Human Services.

“I look forward to the opportunity to continue to serve Pennsylvanians, and all Americans,” she said. 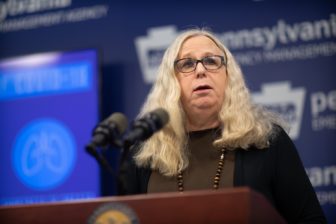 Catch up on our Capitol insurrection and 2020 election coverage: