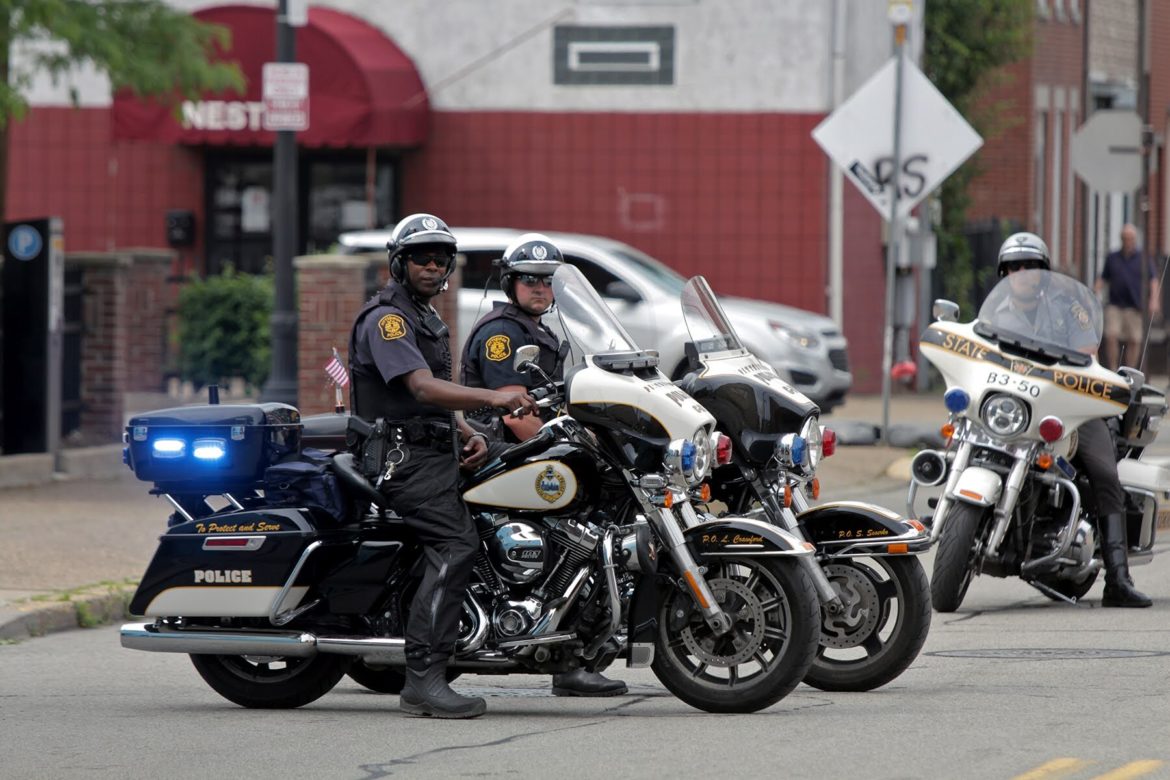 Pittsburgh police officers during a protest in June 2020. (Photo by Jay Manning/PublicSource)

The country is on edge after a mob incited by the president overtook the U.S. Capitol last week, resulting in the death of five people and a sense that the security of American democracy is at risk.

The Washington Post reported that right-wing groups are planning additional armed marches leading up to the Jan. 20 inauguration, according to Alethea Group, which analyzes and combats disinformation online. The report by Alethea Group’ showed plans for activity in all 50 state capitals as well as some other cities, including Pittsburgh.

In a Jan. 12 statement, the FBI’s Pittsburgh Field Office said the agency is aware of reports of possible “protests in our area,” and that FBI agents interviewed a “Pittsburgh-based individual” cited in the report. “At this time, we are not aware of any related threats in our region which includes Western Pennsylvania and the State of West Virginia,” the FBI said in the statement.

The national FBI director, according to the New York Times, told a number of police chiefs from around the country in a call Wednesday to be on high alert, even without verified threats, and warned of attacks on government buildings and businesses.

The Jan. 6 attack on the Capitol caught authorities off guard despite being planned on the open internet. Could a fresh round of dangerous conflicts take authorities by surprise?

A new challenge for local authorities

Jillian Snider, an adjunct lecturer at John Jay College of Criminal Justice and a former New York Police Department officer, said last week’s riot in Washington will cause law enforcement across the country to take more precautions than normal.

“I don't think anyone would have predicted something as vile as what had occurred last week,” Snider said. “I think agencies are definitely going to step it up in terms of making sure they have more than sufficient personnel on scene to try and counteract anything that might be planned.”

Pittsburgh City Councilor Corey O’Connor said in an interview with PublicSource that “we have to be on high alert” after seeing an armed mob commit violence on Capitol Hill last week. “I think some people now are trying to push the envelope a little too extreme,” he said.

In a vote of confidence for the city’s ability to handle any situations that may arise, he referenced the G20 summit held in the city in 2009 and “a number of peaceful protests and walks this summer with very little incidents.”

The G20 and summer 2020 protests, though, were not without controversy, including allegations of inappropriate force used against demonstrators.

John Sicilia, the president of the Allegheny County Chiefs of Police Association, said he is not aware of any credible threats in the region. He said federal, state and city law enforcement have been “very transparent” with sharing any intelligence that has come up.

“However, we’re always preparing for that worst-case scenario,” said Sicilia, who is also the chief of police of the Northern Regional Police Department, which serves several municipalities north of Pittsburgh. “Our reaction is always based on the action and how much people escalate a situation. If it's peaceful protest, we certainly allow that to happen as long as it's done legally. But once property is being destroyed or people are harmed, we obviously have to escalate our tactics and prevent people from being injured.”

The violent riot that took place in Washington last week was unlike any protest seen in Western Pennsylvania in 2020, or any time in memory. Sicilia said cooperation between agencies will be crucial if similar situations arise in the region.

“I don’t think agencies independently could ever be prepared for something like that,” Sicilia said. “But we have a very unique dynamic in the region here in Western Pennsylvania where law enforcement partners from across the region work together … I think collectively as a group we would have a very good handle on a situation like that.

“But for any one agency, a situation like we saw in Washington, D.C., would be overwhelming. But like I said, as a group, I feel that we would be able to keep the residents of this region safe and the property of this region from being destroyed.”

After off-duty officers were identified among rioters at the Capitol, police departments around the country are also grappling with the thought of their own officers participating in an attempted insurrection of the U.S. government. Sicilia said that if it were to come to light that any of his officers at Northern Regional were involved in the Capitol attack, punitive action would be swift and transparent. He said he would not, though, conduct a proactive review to determine if any of his personnel were involved.

“Do I actively ask all 40 of my officers did they go to Washington, D.C., last week? No,” Sicilia said. “But if you’re asking me if it came to light and I saw video of one of my officers breaching the Capitol building, yeah, that would be an issue.”

In a written statement Jan. 9, Pittsburgh Public Safety Director Wendell Hissrich said that his department is aware of “social media rumors and media reports” of possible unrest in the city in the coming days.

“Public Safety is preparing with our law enforcement partners at the local, state and federal levels for any and all events in the city,” Hissrich said. “We will ensure Public Safety.”

Hissrich also wrote that “if city officials determine that any City of Pittsburgh employees participated in Wednesday’s deadly insurrection in the national’s [sic] capital, appropriate disciplinary action will be taken.” The Pittsburgh Department of Public Safety did not respond to questions about any plans for an internal review.

What you can do to stay safe

Richard Donohue, a former police officer in Boston and current policy researcher at the RAND Corporation, said a lot of the things people can do to stay safe in the event of civil unrest are similar to what they are already urged to do to stay safe from COVID-19.

“I’m probably going to be staying at home, and I’m going to be pretty safe in my house,” Donohue said.

Sicilia recommended that people remain calm and use a “common-sense approach” if they encounter a situation that appears threatening.

“If I were watching the news, and I saw that there were violent protests in the city of Pittsburgh,” he said. “I certainly wouldn’t be packing my family up and taking a drive through the city or any area.”

Neither Sicilia nor Donohue recommended that people close businesses or keep children home from school in the absence of a more concrete and demonstrated threat.

“If you see concerning behavior or see things that are concerning online that you think might lead to a violent act, this is how … situations can be diverted,” Donohue said. “A lot of these folks who have committed a variety of acts … there tends to be some clues or some leakage that could be acted upon.”