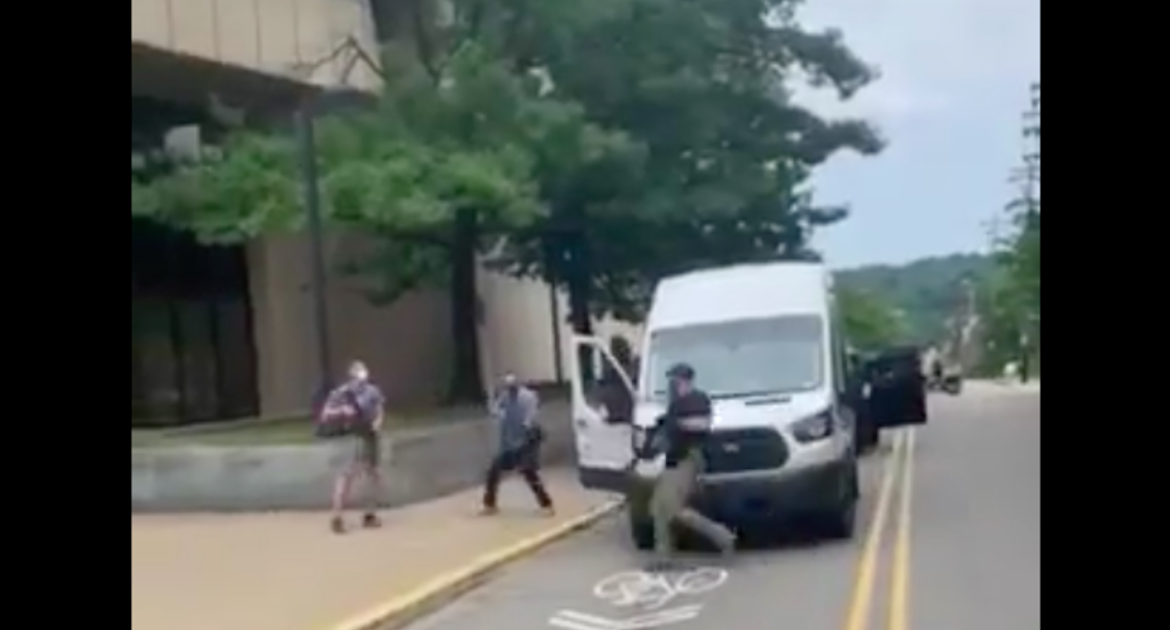 A screenshot from a viral video of an arrest of a protester by plainclothes police at a Saturday protest.

A viral video showing the arrest of a protester by plainclothes police in an unmarked van in Pittsburgh on Saturday has incited outcry from activists, civil rights attorneys, elected officials and residents.

The incident has raised questions about the presence of plainclothes officers at protests and whether the arrest violates First Amendment rights. PublicSource reached out to legal experts, former law enforcement officers and civil rights advocates to help understand the tactic and the tension over plainclothes arrests.

Law enforcement officials claim the reason they pursued the arrest the way they did was to draw as little attention as possible and avoid escalating the situation. Yet some worry that the tactic may be a strategy to deter protest participation.

The protest marshal, Matthew Cartier, was arrested for allegedly blocking traffic, despite multiple verbal warnings from police, according to law enforcement. He has been charged with failure to disperse, disorderly conduct and obstruction to highways or other public passages.

During a press conference on Sunday, Aug. 16, Pittsburgh Bureau of Police Chief Scott Schubert said the bureau “did not do something to make people frightened” during the arrest. “That was a calculated movement that was done to remove somebody from the event and to make sure everything was safe when the protest moved on.”

Yet others saw the arrest as a form of intimidation. “The thing about these tactics to me, is that it seems clear that they’re putting in resources to [arrest protesters]... in a manner that might be designed to discourage the protests from happening in general,” said Jennvine Wong, a staff attorney for The Cop Accountability Project at the Legal Aid Society. “Because they’re so hypersensitive of really kind of controlling these protests, they’re ignoring the balance of respecting their First Amendment rights.”

Mayor Bill Peduto on Monday spoke out harshly against the tactic of what some people have called “snatch and grab” but police called “low-visibility arrest.”

"It is hard to find the words for how livid I was after seeing the online videos of the disturbing arrest at Saturday's protest,” a Monday statement from Peduto said. “I have taken the time to review all the video and information that has been made available to me. As Mayor, I will never tolerate these tactics being used at peaceful protests again."

But that rebuke also raises questions.

“Who will define what a peaceful protest is?” said attorney Lisa Middleman, who is representing Cartier. “[B]ecause, honestly, I think these peaceful protests turn into something else when the police use violence against people who are protesting.”

Allegheny County District Attorney Stephen Zappala said the charges against Cartier should have been handled via summons — the equivalent of being written a traffic ticket — rather than an arrest.

“Pending the review of body worn camera footage which my office obtained earlier today, this matter appears to be a summary offense at best and should be handled by the Pittsburgh Police Department in a summary hearing,” Zappala wrote in a press release on Monday.

Jillian Snider, an adjunct lecturer at John Jay College of Criminal Justice and former New York Police Department officer, said using plainclothes officers is legitimate. Snider, who worked in undercover vice operations, said while plainclothes officers are typically assigned to more serious crimes, given the current tension between communities and police, she believes the Pittsburgh Bureau of Police’s tactics were warranted. Having uniformed officers at the protests may have incited anger, she said. Using plainclothes officers can allow police to monitor situations without escalating them, she said.

“Generally, this wouldn’t be a plainclothes unit’s typical assignment, but because of the situation right now and the tension, and the need to maintain public order, the police still have to do their job,” she said, “even if the public doesn’t want them there.”

David Wright, Pittsburgh Bureau of Police’s former chief instructor on use of force and defensive tactics, agreed. “Based on everything I see, there’s nothing illegal about the arrest and the way they did it,” he said. “Quite frankly, if they had the probable cause to make the arrest… it’s actually a very solid technique.”

Is this practice new?

Yet Wong said the practice, in general, isn’t new.

“That’s just something that they have been utilizing in overpoliced neighborhoods and communities of color for years,” she said.

Middleman agreed. “It’s been used in communities of color for years. They call it the ‘jump-out boys,’” she said, adding that the practice has been used locally for narcotics arrests.

He said the practice can instill fear in protesters and discourage lawful protest, which may violate the First Amendment. “We don’t want to be in a position here where the movement — the civil rights movement, the Black Lives Matter movement — their First Amendment rights have been infringed upon because of fear that the police were doing this,” he said.

Are plainclothes officers identifiable as police?

According to the protester who was arrested, the officers “lured me closer by pretending to need directions around the march,” then jumped out and arrested him, he wrote in a tweet. Police Commander Ed Trapp said during the Sunday press conference that the officers were wearing Pittsburgh police shirts, badges and identified themselves as police immediately.

Snider said plainclothes officers are obligated to identify themselves, especially before making an arrest, and typically wear bulletproof vests and badges or shields around their neck or waistline.

“They’re not going out there intending to fool or not tell the public who they are, they’re just going out there and drawing a little less attention,” Snider said. This differs from undercover officers, who are portraying a role other than a police officer and therefore do not wear identifiable indicators, she said.

Is Pittsburgh the next Portland?

When Dickinson first saw the viral video of the arrest, he said he immediately saw the parallels between that and the recent protester arrests by federal agents in Portland.

During the Sunday press conference, Schubert tried to ease resident concerns.  “Believe me, as a Pittsburgher and a police officer, nobody wants to see what looks like things that have happened in Portland and other areas like that. That is not our intent.”

Wong said the key is whether police are held accountable for their actions. “I think it’s really going to depend on the leadership of the police department, the leadership of Pittsburgh to make that decision,” she said. “If you’re not able to hold police accountable, for example, then who’s to say, right?”

The Pittsburgh Bureau of Police requests that protesters share their planned protest route with the bureau in advance. Bob Harrison, a RAND Corporation researcher and former police chief in Vacaville, California, said increased communication between protesters and police could help resolve similar issues in the future.

“For the police and community, there is no downside to collaborating – even though many of the protests are aimed at police misconduct, cops in general will want the event to progress safely, and without incident,” Harrison wrote in an email to PublicSource. “If either side refuses to engage, it detracts from their respective message in the eyes of others.”

Editor's note: The story was updated to include a statement from Allegheny County District Attorney Stephen Zappala.