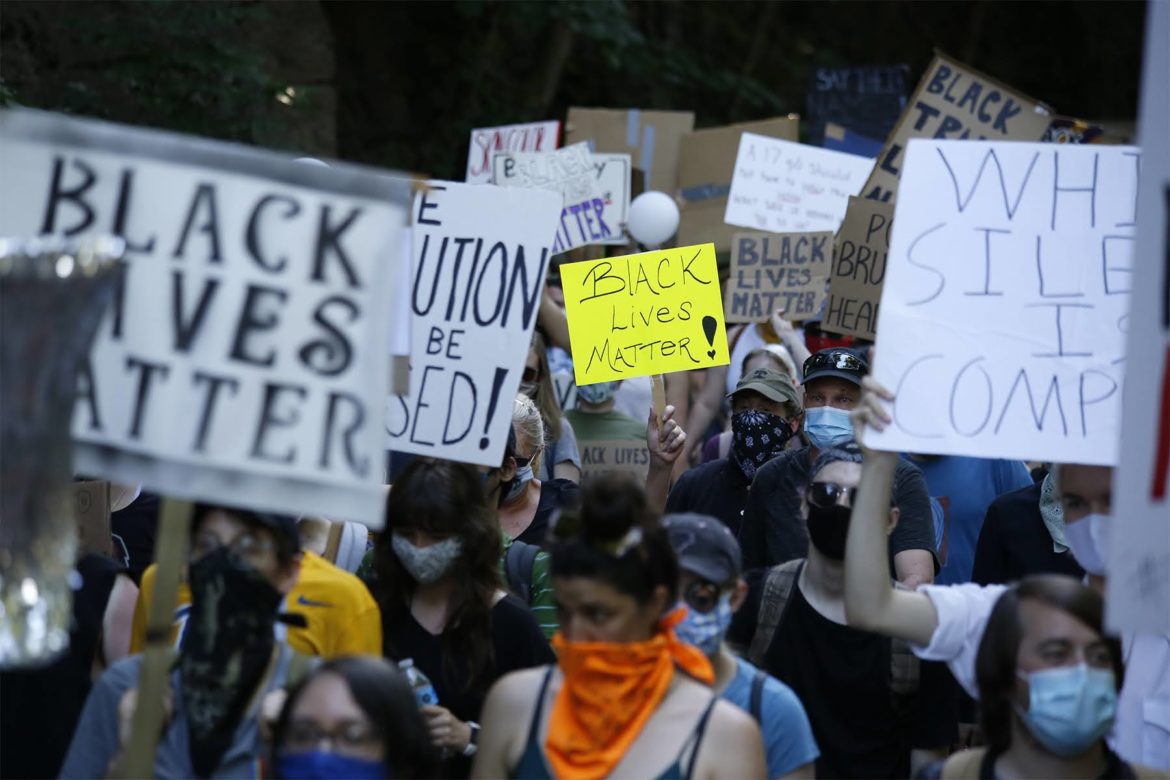 Protesters against racism and police brutality march down P.J. McArdle Roadway from Mount Washington on June 7, 2020. (Photo by Ryan Loew/PublicSource)

When Jasiri X moved from the south side of Chicago to Monroeville as a teen in the 1980s, he discovered “in-your-face racism” for the first time. On his first trip to Monroeville Mall, someone called him a racial slur.

“People refer to Pittsburgh as the Mississippi of the North,” said Jasiri X, founder of the prominent social justice activist group 1Hood in Pittsburgh. “I would tell people that would come here that Pittsburgh is an overtly racist place. It’s not subtly racist. It’s not like, ‘We’re gonna hide it.’ It’s pretty overtly racist.”

Following the storming of the U.S. Capitol on Jan. 6, plans for far-right demonstrations and the possibility of violence have been identified across the country. The anti-disinformation group Alethea Group identified Pittsburgh as a possible site of far-right activity, according to the Washington Post, though the FBI released a statement Jan. 12 explaining it has not identified any threats directed at Pittsburgh.

Still, given initial reports like this and the Pittsburgh area’s existing relationship with white supremacy, it seems intuitive to Jasiri X that more of this violence could be coming to Pittsburgh.

“If we’re a hotbed of white supremacist activity,” he said, “we should be expecting violence, shouldn’t we?”

FBI analysts declared Pittsburgh a “hub” for white supremacy in November 2020. Several white supremacist and other far-right hate groups operate across Pennsylvania, including groups associated with the Ku Klux Klan. In October 2018, a gunman attacked the Tree of Life synagogue in Squirrel Hill in the deadliest anti-Semitic attack in the history of the United States. The attack was also motivated by hatred toward immigrants.

A man in Toledo, Ohio, who planned another attack on a synagogue, said the Tree of Life shooting inspired him, and the man who shot and killed 49 Muslims at two mosques in New Zealand wrote a manifesto outlining a white supremacist ideology strikingly similar to that of the Tree of Life shooter.

“The Pittsburgh attack was itself worldwide, not just in Pittsburgh and not just nationally,” said Brad Orsini, senior national security advisor for the national group Secure Community Network and former FBI special agent. 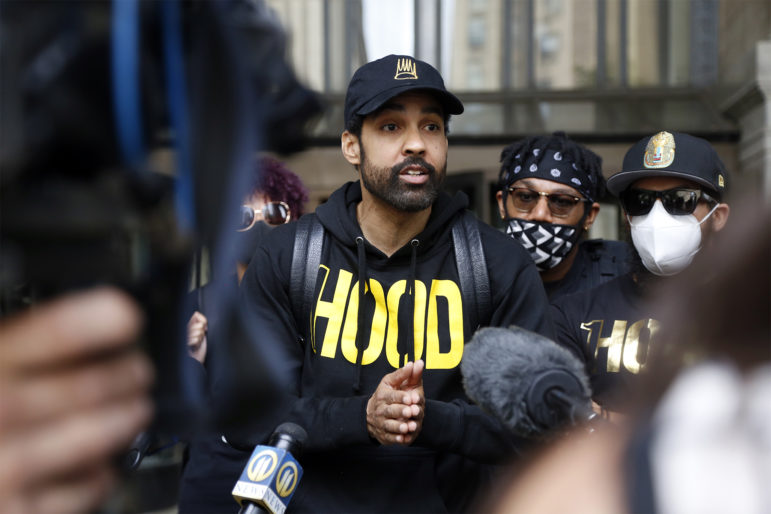 Jasiri X, executive director of 1Hood Media, speaks to members of the news media at a at a press conference on the portico of the City-County Building on Monday, June 15. (Photo by Ryan Loew/PublicSource)

Orsini said that since the white supremacist “Unite the Right” march in Charlottesville in 2017, there has been a significant increase in hate crime across the country. Orsini, who managed security for the Jewish Federation of Pittsburgh before taking his national position, has witnessed a slew of far-right hate group activity in Western Pennsylvania.

“We’ve seen the Ku Klux Klan in Pittsburgh, we’ve seen Patriot Front, we’ve seen Identity Europa,” Orsini said. “We have seen visible signs of those groups throughout Western Pennsylvania and in Pittsburgh over the past four years, absolutely.”

Shawn Brokos, who replaced Orsini as Jewish community security director for the Jewish Federation of Pittsburgh in early 2020 and is also a former FBI agent, noted that white supremacist incidents in the Pittsburgh area have increased in the past few years, though it’s unclear whether this reflects newfound hate or better vigilance in discovering it.

“This really could be two-fold,” Brokos said. “Is there actually an increase in this white supremacy ideology, or are we, as a Jewish community, being more proactive in reporting it? I think it’s really hard to measure.”

The sort of white supremacist activity seen in recent years across the country and in Pittsburgh has a lot of cross-pollination with the far-right extremists who participated in the storming of the Capitol Building, according to Brokos. In the media footage of the incident, some can be seen brandishing anti-Semitic messages.

“If you look at the anti-government, anti-authority organizations, many of those have their extremist-based beliefs and within them contain a degree of anti-Semitism,” Brokos said.

In recent years, hate groups have started to collaborate and gotten better at organizing than before, according to Kathleen M. Carley, director of the Center for Computational Analysis of Social and Organizational Systems at Carnegie Mellon University.

“You’re now getting links between, for example, between QAnon and Proud Boys. You’re getting links to many other vocal homegrown groups,” Carley said. “What you want to watch out for is those groups forming coalitions, forming groups, because that allows them to mobilize.”

QAnon, a movement surrounding discredited conspiracy theories with hateful elements, “is not an organized group with defined leadership,” according to the Southern Poverty Law Center. Still, the FBI declared it a “domestic terrorism threat” and individuals affiliated with QAnon participated in the Jan 6. Capitol attack. The Proud Boys, founded in 2016, has emerged as one of the most prominent violent, white supremacist hate groups in the country in recent years.

“The other thing you can do in social media is that you can actually write your messages in such a way that it gets people to start following and paying attention to each other and thereby forming a group,” Carley said. “And then you can start focusing that group around a smaller set of topics, and so the group as a whole becomes more of an echo chamber. And at that point, the group is primed.”

“What you want to watch out for is those groups forming coalitions, forming groups, because that allows them to mobilize."

The month before the shooting at Tree of Life, the Network Contagion Research Institute released a paper through Cornell University that warned of a near-doubling of racist hatred in online environments such as social media. The shooter actively engaged in these online communities.

According to Joel Finkelstein, director of the institute, these online forums have evolved from outlining complex, hateful conspiracies and ideologies that some individuals act upon to now coordinating militias.

“What we saw back in Pittsburgh was that you had stochastic attacks of terror that were emerging from these really toxic platforms,” Finkelstein said, referring to random, lone-wolf attacks. “And that’s a very simple kind of formula. It’s like, one guy gets it in his head to actually act on these horrible conspiracies.”

“What I think is really chilling, is that you have these militias that are essentially launching attacks against democracies from mainstream platforms,” he said.

Jasiri X co-hosts a podcast through 1Hood called “This Week in White Supremacy,” which has recently covered news about the disproportionate effect of COVID-19 on communities of color as well as immigrants who have died in ICE custody. It’s garnered an engaged audience, and a Pittsburgh Post-Gazette list named it one of nine podcasts they love earlier this year. The show often delves into deeply upsetting topics like the incident at the Capitol Building.

In addition to national topics, the show also covers local news about white supremacy. Despite having news from across the country to discuss, Jasiri X and his co-hosts still have a lot to say about Pittsburgh.

“White supremacists and racism,” he said, “it’s just accepted in this area.”

CORRECTION: (1/19/2021): This story previously stated that an anti-Semitic slogan used at a prior far-right demonstration appeared at the Capitol riot. That reference has been removed.