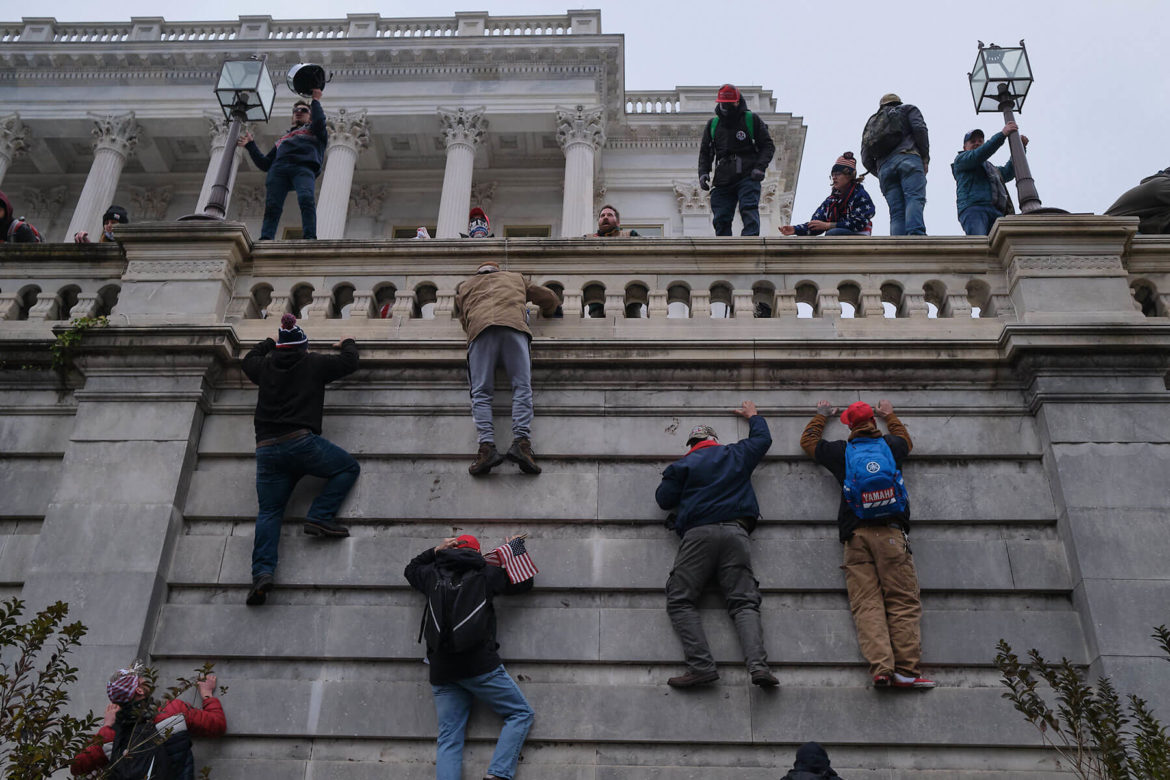 Insurrectionists scale the walls of the Capitol Building from the West Front. (Quinn Glabicki for PublicSource)

Believing in America is hard these days. For every piece of hope, it gives you a dozen blows and disappointments. On Jan. 6, 2021, it gave us a mob of home-grown terrorists storming the U.S. Capitol, a president inspiring an insurrection, Confederate and Trump flags carried into the building where the laws are voted on, the People’s House desecrated and vandalized with “Murder the Media” and similarly spirited messages on the doors. Four people died.

In modern history, Americans never lived through anything like it, on such a scale. The world has never seen anything like it, an assault on democracy that’s supposed to be an example for other countries, reported live in the news with a dateline — Washington, D.C. America gave us an example of violence by the Trump-inspired mob and a glimpse of what ochlocracy — mob  rule — could look like. It suddenly felt fragile. Everything. Chaos. American exceptionalism was on shameful display, exposed.

It should not have surprised us if we were paying attention. But it was still hard to process.

In modern history, Americans never lived through anything like it, on such a scale.

As a journalist, who has lived through and covered coup attempts in other countries, I have been trying to draw comparable examples to what I’ve seen developing on screen Jan. 6 in the United States. Mostly, what I’ve seen and covered were uprisings against authoritarianism. What happened in the U.S. Capitol was the uprising of insurrectionists against democracy, exactly because democracy worked. I kept coming back to one coup in particular: the overthrow of government I witnessed in Kyrgyzstan in 2005.

In that uprising, the motives of Kyrgyz people invading the government buildings, destroying furniture were different from the pro-Trump rioters. They were seeking to end corruption, protest the actually rigged elections and 15-year-long authoritarian rule by Askar Akayev, a former communist. In the country with weak institutions, people, destitute with no other options or hope, stormed the government that didn’t represent them.

Looting and vandalism happened (no guns, just rocks), cell communication was disrupted and my mother, unable to reach me, sent my almost-80-year-old grandma across the border from my native Kazakhstan to be with me. I lived in an apartment building in the capital of Kyrgyzstan, Bishkek, with a grocery store downstairs. It was an uncertain and terrifying time.

It was one of my first reporting experiences and it was hard to gauge and hard to report what was happening and who was in charge of the government. When the night fell, we heard carts filled to the gills moving downstairs, glass broken; the store was being looted. I remember looking out of the window and seeing a taxi driver loading a couch onto the roof of his taxi car looted from a nearby furniture store. I asked Grams: “What should we do? What will happen next?” She waved at me: “Just lock the door well. And sit tight. These people are not fascists. It will be OK.”

What she said gave me confidence; she must have known, she lived through World War II, worked for the front as the Morse code expert interpreting the messages and telegrams; she knew how the Nazis operated firsthand. On Wednesday, I wondered what she would say about the mob in D.C. 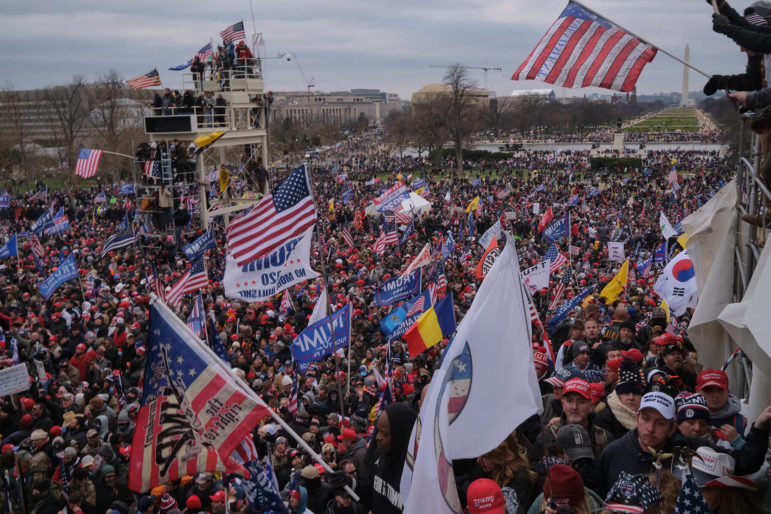 A mob of Trump loyalists fills the West Front of the Capitol grounds as insurrectionists climb and occupy scaffolding set up in advance of President-elect Joe Biden's inauguration. (Quinn Glabicki for PublicSource)

I am writing this, of course, from Pittsburgh, the ‘hub’ of white supremacy (not my label, it’s the FBI’s) where hate groups, including neo-Nazis, are actively recruiting, training recruits and holding events. The violent mob invading the U.S. Capitol should not surprise us if we were paying attention.

The writing has been on the wall, and yes, it’s hard to connect the dots looking ahead, now we get to connect them in a straight line. Hate has always lived here. It peaked in the past four years, nurtured, validated and empowered by people in highest offices. Still, the violent mob invading the U.S. Capitol should not surprise us if we were paying attention.

Now, there are fundamental differences between what happened in D.C. on the day two weeks before Donald Trump will no longer be president and what happened in a country like Kyrgyzstan in 2005. In a democracy, violent overthrow of government and subversion of the election is not how things are supposed to be done; there are strong institutions, checks and balances and processes. Peaceful transition of power is at the core. There is still solid journalism happening in this country.

The institution of the press — in spite of all the polarization, whipped-up propaganda and fake news rhetoric — is decent and, thanks to the courage of reporters on the ground, we were able to see what was happening in D.C. on Jan. 6.

In Kyrgyzstan, there was very little faith in institutions, the constitution was rewritten all the time, election fraud rampant, and no separation of powers to speak of or an independent judiciary to rely on or fortified local press serving the watchdog role. Journalists get beaten, intimidated and routinely attacked.

As hard as it is to believe in America (with obvious hypocrisy of how differently the people storming the Capitol would be treated were they Black or Brown), it’s relative still and it’s crucial to put things in perspective. It seems warranted to feel angry, scared and distraught about the state of American democracy. But now also seems like a time to commit to the institutions of democracy, not to the demagogues and those who indulge them in their lies, and hope that we, as a nation, will resurrect and hold reason and truth above all.

The role of the press is imperative in that resurrection; we have the documented record of what happened yesterday because of journalists, work that is paramount given the proliferation of doctored images suggesting falsely that it was “Antifa” swarming the Capitol. The record of it, produced by the free press, is an antidote for this type of misinformation, independent of who’s in power.

The complexity of America was on display Jan. 6. As the mob of domestic terrorists physically stormed the U.S. Capitol, the GOP officially lost control of both chambers through a legitimate democratic process known as elections, with the declared win of Jon Ossoff in Georgia.

I spent last night watching till the end lawmakers certifying the vote and making President-elect Joe Biden’s victory official despite the mayhem earlier in the day.

As a new American who in 2020 voted in her first election, I am trying to balance the promise and disappointments with my newly adopted country. I stand by journalism today and what it represents as an institution of democracy and I still hold out hope that it survives here.

It’s messy and hard, it’s not perfect but it’s still the best form of government we have.