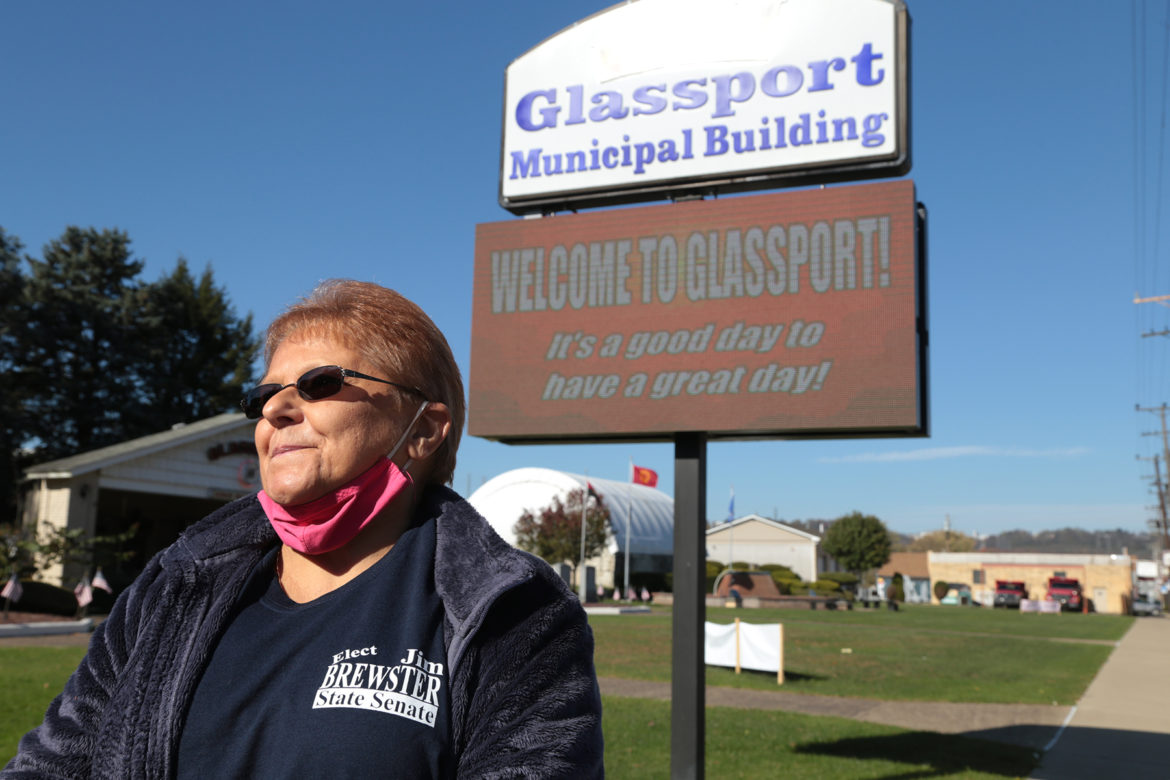 Beth Cadman, of Glassport, spent election day passing out literature for a Democrat, after voting for a Republican for president. (Photo by Ryan Loew/PublicSource)

Beth Cadman was passing out literature for a Democrat on Tuesday, but voting for the Republican at the top of the ticket.

“I just like the man and I think he has been very good with his decisions,” Cadman, an unemployed preschool aide, said of President Donald Trump. “He’s nobody’s puppet, and he’s doing it all on his own.”

She voiced her support for Trump while handing out cards for state Sen. Jim Brewster, a Democrat, to voters entering the Glassport Borough Building. The lifelong Glassport resident was not at all surprised that many of her neighbors in the traditionally Democratic town were darkening the Republican’s oval in the race for president.

“I think it’s an old mill town, and [Trump] is for helping the people in the mills,” Cadman said. “He supports the little guy.”

Democrat Joe Biden easily out-polled Trump in Allegheny County as a whole. But the populist Republican president appeared to hold the loyalty of voters in some blue-collar towns. It may be years, though, before data shows whether that’s a reflection of Trump’s personal appeal, or a broader partisan realignment.

Not only did Trump win Glassport, but he appears to have matched or improved upon his 2016 showings in other mostly-white, working-class towns like Tarentum and Oakdale. PublicSource spent time, pre-election, in all three of those towns, which gave majorities of their votes to Trump in 2016, after delivering for Democrat Barack Obama in 2012.

Even in more-diverse Clairton, which gave most of its votes to Biden amid residents’ concerns about the nation’s divisions, Trump bettered his 2016 showing.

(Note: The 2020 vote totals used in this story were posted by the county Thursday morning, when the vote count was around 95% complete. PublicSource’s updated coverage of the election is here.)

In Glassport’s borough office, there’s an unofficial history book cobbled together decades ago. One of the entries is a photocopy of the front page of The Glassport Times from Nov. 5, 1937. The headline reads: “Democrats Win All Offices in Borough.” 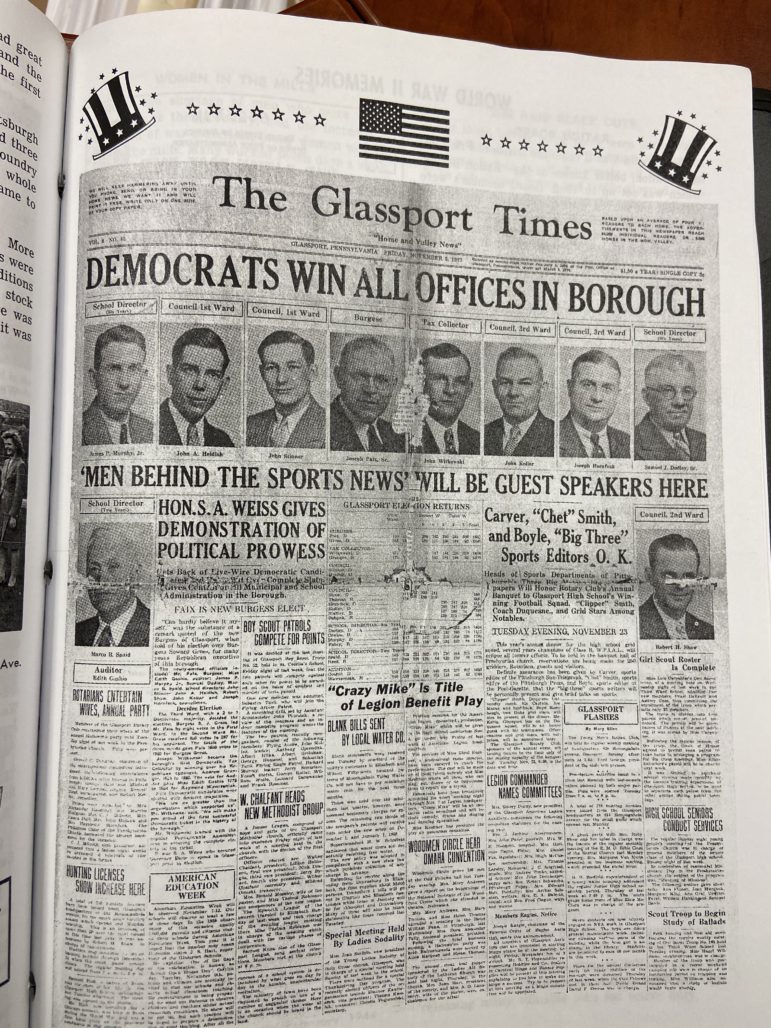 A copy of the front page of The Glassport Times, Nov. 5, 1937, found in an unofficial history of Glassport Borough. (Photo by Rich Lord/PublicSource)

“I wasn’t shocked by the Trump vote at all,” said the borough’s Mayor Keith DiMarco, who is a Democrat, on Thursday. (Six of the borough’s seven council members are also Democrats, and the other one is an independent.)

The town is, after all, just across the Monongahela River from U.S. Steel’s Clairton Works and Irvin Works. “When Trump came in,” he said, “the steel mills started hiring again. My friends that got their jobs back at the mills got raises.”

Economists may not agree that Trump’s protectionist trade policy helped mill towns. But in Glassport, many gave the president credit, said DiMarco.

Several Glassport residents said they were voting for strong borders, against what they perceived as socialism or liberalism, in support of embattled police or to preserve their jobs.

“If one of the candidates gets in, I know my job is threatened,” said Dwight Van Natta II, 37, who said he worked for a company that shipped manufactured parts — including some used in the fracking industry — to buyers all over the globe. 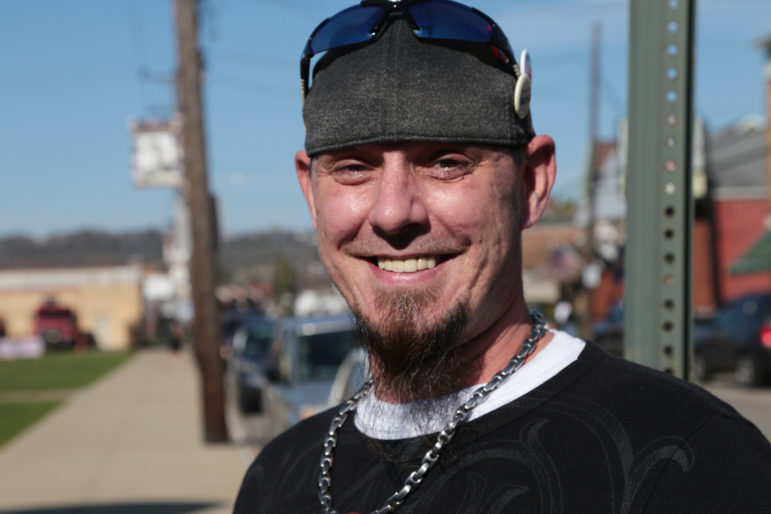 Dwight Van Natta II, of Glassport, voted for Donald Trump before hurrying off to his daughter's 16th birthday party. (Photo by Ryan Loew/PublicSource)

“We still have a lot of good jobs in this town,” Van Natta said. Biden, he said, could hurt the fracking industry, which indirectly drives some of that employment. “I believe Trump would protect us.”

A bridge away, voters interviewed at Clairton City Hall were almost unanimously concerned with the divisions in the country, and Trump’s harsh rhetoric, especially in regard to racially and ethnically charged issues.

“The last four years have been a catastrophe, to say the least,” said Tammy Clines, 55, a medical biller, after voting for Biden, in Clairton. “We need a leader that’s going to lead us, not keep up with this Twitter-fest and the racism thing.” 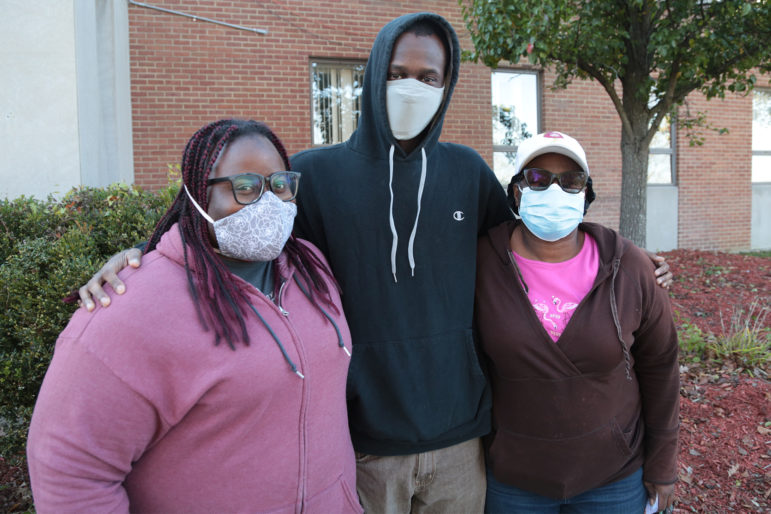 Tammy Clines, right, posed with her daughter Brittnii (left) and son Jhared after the three voted in Clairton on Nov. 3, 2020. (Photo by Ryan Loew/PublicSource)

Clairton is similar to Glassport in that it skews older, poorer and less educated than the county as a whole. But whereas Glassport is around 89% white, Clairton is 61% white, according to U.S. Census Bureau estimates.

Trump won around 33% of Clairton’s votes, as of Thursday’s count. While low, that was higher than Trump’s 29% take in 2016, which was in turn better than Republicans Mitt Romney or John McCain got in 2012 and 2008, respectively.

The desire to turn down the rhetoric and to bridge worsening divides was less evident in Glassport — but it wasn’t entirely absent.

“We need to unite this country,” said Judy Wesolowski, whose husband, Jack, also decried the fiercely partisan atmosphere. “It’s been divided for a long time. … I voted for Biden.”