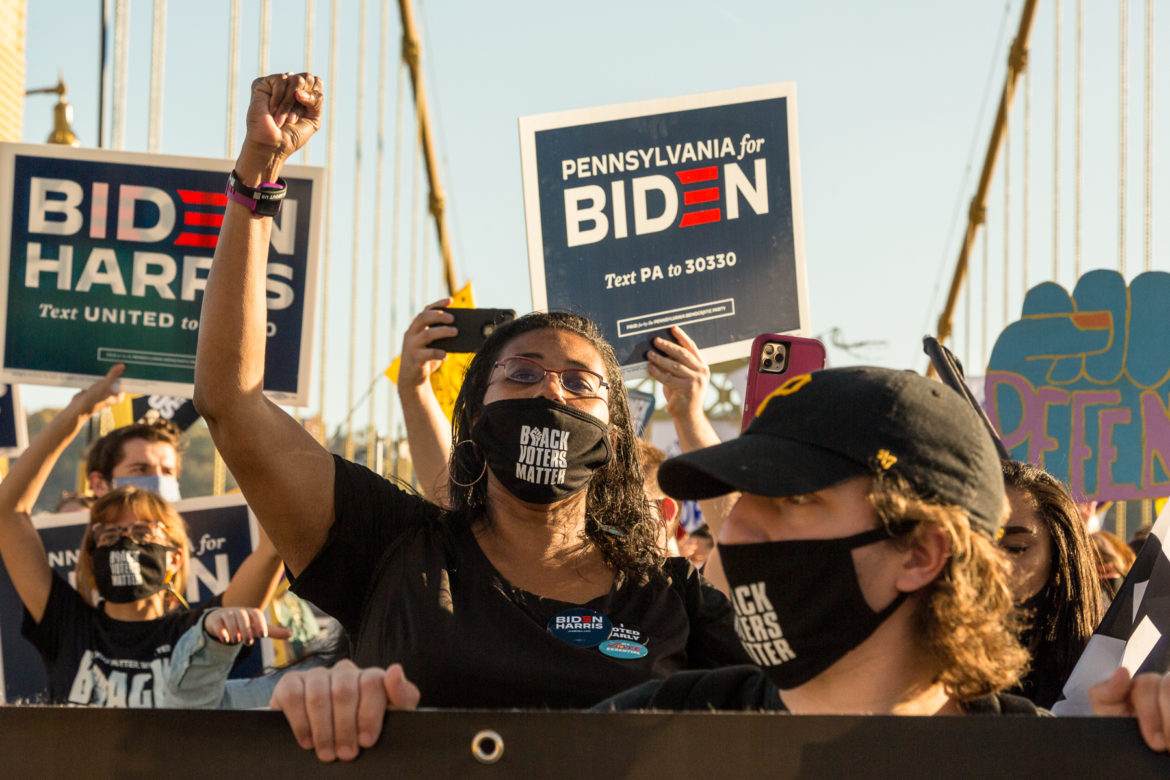 Crowds march across the 10th Street Bridge in celebration of Joe Biden's victory over Donald Trump on Nov. 7, 2020. (Photo by Nick Childers/PublicSource)

Joe Biden was declared the winner of the 2020 presidential election after the Associated Press and other outlets declared him the winner of Pennsylvania. Although the vote margins are close in Wisconsin, Arizona and Georgia, Pennsylvania was the state that tipped the scale enough to call the election.

So, how did he win Pennsylvania? The New York Times attributed Biden’s win to “counties east of the Appalachians [that] shifted left.” The Washington Post argued that “it wasn’t Pennsylvania’s major urban centers that set the result in 2020.” Instead, they wrote, “It was Erie County and other places like it, where relatively minor shifts across a wide swath of small, industrial cities, growing suburbs and sprawling exurbs.”

But if Allegheny County voted for Biden as predictably as it had for Democratic candidates the past five elections, the results this year could still be uncertain. It was Biden’s unusual, historic performance in Allegheny County, alongside one suburban Philadelphia county, Montgomery County, which provided enough of a margin for Biden to definitively win.

As of Wednesday evening, Allegheny County had already recorded the vast majority of its votes, more than 717,000, the largest number of ballots cast since more than 719,000 votes were cast when Lyndon Johnson was elected in 1964. And the 1964 election was near the peak of the county’s population boom when about 30% more people called Allegheny County home. There are still some provisional and overseas ballots that haven't yet been included and just under 1,000 additional ballots that were postmarked by Election Day and arrived within three days.

PublicSource looked at how each of the 1,323 precincts in the county voted to tell the story of how Biden won. As the last ballots are counted, it could change the results in single precincts that are close. We’ll update this piece with any changes once all the votes are tabulated.

As of Wednesday night, Biden led Donald Trump by 51,301 votes in Pennsylvania, according to the state tally, enough votes to prevent an automatic recount and likely enough votes to survive any legal challenges that Trump attempts.

Allegheny County delivered around 47,000 more votes for Biden than the average Democratic presidential candidates since 2000. And he won more than 37,000 additional votes compared to Hillary Clinton in 2016. Only Montgomery County moved in Biden’s direction by about the same number of raw votes: he’s winning Montgomery by about 37,000 more votes than Clinton did according to the state tally. Allegheny and Montgomery Counties are the second and third largest counties in the state, less populous than Philadelphia.

Their additional votes make any recount or legal efforts unlikely to change the outcome. Although Biden increased his vote margin in other Pennsylvania counties — Allegheny and Montgomery Counties shifted definitively to secure his victory.

That predictability changed dramatically this year: Allegheny County has already delivered at least 145,815 more votes to Biden than to Trump.

If Biden had performed just as well as Clinton in Allegheny County — with all else being equal —  he would be winning the race in Pennsylvania by fewer than 15,000 votes. That likely would have triggered an automatic recount and could have made Biden’s margin more susceptible to legal challenges.

Based on data available so far, Biden appears to be receiving more votes from white suburban voters, while Trump is picking up a higher share of Black urban voters than last time.

Biden’s core support locally is still in Pittsburgh. Biden received more votes in 392 out of 402 precincts in the city. And with few exceptions, Biden’s support carried into the suburbs immediately outside the city, including Mt. Lebanon to the south, Fox Chapel to the north and most of Monroeville to the east. But the outer edges of the county, such as Elizabeth Township, Findlay Township and Fawn Township favored Trump.

Despite this, Biden also owes his victory in part to increases in support in many of these areas where he lost. Four out of the five precincts where Biden increased his vote total the most were in areas Trump won and where Trump also gained hundreds more votes compared to his performance in 2016. Biden kept pace or nearly kept pace with Trump’s increases in most rural areas.

Notably, Biden not only gained ground but earned enough support to win some of the outlying suburbs that Clinton lost, such as McCandless, Ross, White Oak and Upper St. Clair.

Correction (11/12/2020): A previous version of this story misidentified the vote totals in several precincts in story text and maps. Our story initially was based on a comparison of vote data and precinct boundaries that were mistakenly matched alphabetically. That mistake in matching did not impact every geographic area, but it meant that some voter data was incorrectly attributed to the wrong precinct. Examples based on incorrect data have been removed from the story, and vote totals in the text and maps have been revised to reflect Allegheny County’s voting data current as of November 12. We sincerely regret the error.