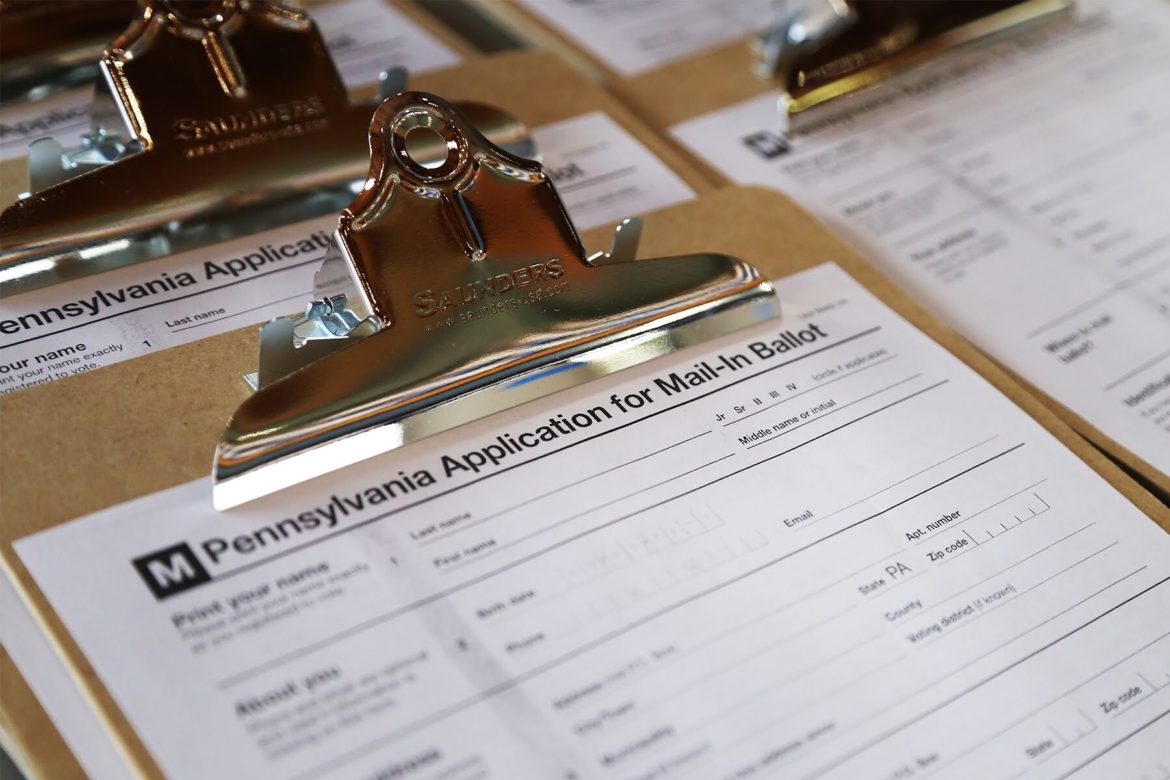 An application for a mail-in ballot at a satellite election office in Allegheny County. (Photo by Ryan Loew/PublicSource)

Pennsylvania was shoved into the spotlight of the week-long, real-life drama of an election unlike any other in modern history. Counties worked around the clock for days to tabulate a record number of mail-in ballots, and the nation waited to learn the fate of the commonwealth’s 20 electoral votes.

Cable news viewers across the world became intimately familiar with local geography, such as the voting tendencies of Philadelphia’s “collar counties” and Erie’s status as a presidential bellwether. Lt. Gov. John Fetterman caught national attention for saying that President Donald Trump could “sue a ham sandwich” and that every vote would be counted despite Trump’s protests.

Is this our new normal? Every four years, will the country watch as Pennsylvania spends five days, or more, counting mail-in ballots? Will the populace be subjected to a sea of disinformation while it slowly sifts through election returns?

Experts say it depends in large part on the state legislature and the post-pandemic behavior of voters — two things that aren’t very predictable.

“I think the commonwealth did a pretty good job of executing an election under incredibly trying circumstances,” said Chris Deluzio, policy director of the University of Pittsburgh Institute for Cyber Law, Policy, and Security. He said between the pandemic, many counties using new voting machines for the first time, and the transition to mail-in voting, "it was a very difficult set of circumstances. And I think despite that, we saw an election that was executed pretty well.”

This hasn’t stopped prominent Republicans, including Trump, from making false claims and baseless allegations of fraud in Pennsylvania and elsewhere. PublicSource and many other outlets reported before the election that in-person, Election Day votes would be reported on Nov. 3 and mail-in ballots would be reported over a period of several days after that. Most of the suspense and shift in vote tallies during election week was foreseen.

Here’s what can be predicted about future elections in Pennsylvania.

‘Mail voting is here to stay in Pennsylvania’

Pennsylvania’s ballots took so long to count because the state shattered its previous record for votes cast by mail, and the process for counting those is much slower. The surge in mail-in voting was caused by the aversion of many voters to crowded public places during a pandemic. But don’t expect vote-by-mail rates to see a big drop as soon as the pandemic subsides, whenever that may be.

“I would be confident that a very large number of Pennsylvanians are going to continue to vote this way,” said Patrick Christmas, the policy director of the good-government nonprofit Committee of Seventy. “I think they’re going to appreciate the convenience of receiving their ballots at home, taking their time to review the candidates, the offices, the ballot questions if there are any, and then having ample opportunity to return it.”

The reason so few Pennsylvanians voted by mail before 2020 is that it was not an option for most voters until last year. Until the state legislature passed Act 77 in 2019, only those with a narrow set of excuses could request an absentee ballot.

“It's not just the pandemic, it’s the fact that this was the first year,” said Bethany Hallam, a Democratic Allegheny County Council member who sits on the county’s Board of Elections. “We don’t have any other elections to compare this to … we can’t compare this year’s mail-in numbers to last [election’s] absentee and overseas numbers. It’d be like comparing apples to oranges.”

Hallam said she expects the rate of mail-in voting to remain high, if not at 2020 levels, partly due to the Democratic Party’s successful promotion of mail-in voting. She cautioned against expecting the numbers to shoot even further up, though, pointing to frustrations some voters had with the U.S. Postal Service, delayed or missing ballots, and some 29,000 ballots that were sent to the wrong voters and had to be redistributed.

Act 77 could be changed, though, as Republicans have decried its inconsistencies and Democratic Gov. Tom Wolf sought a number of late changes to election procedures that weren’t addressed in the law. 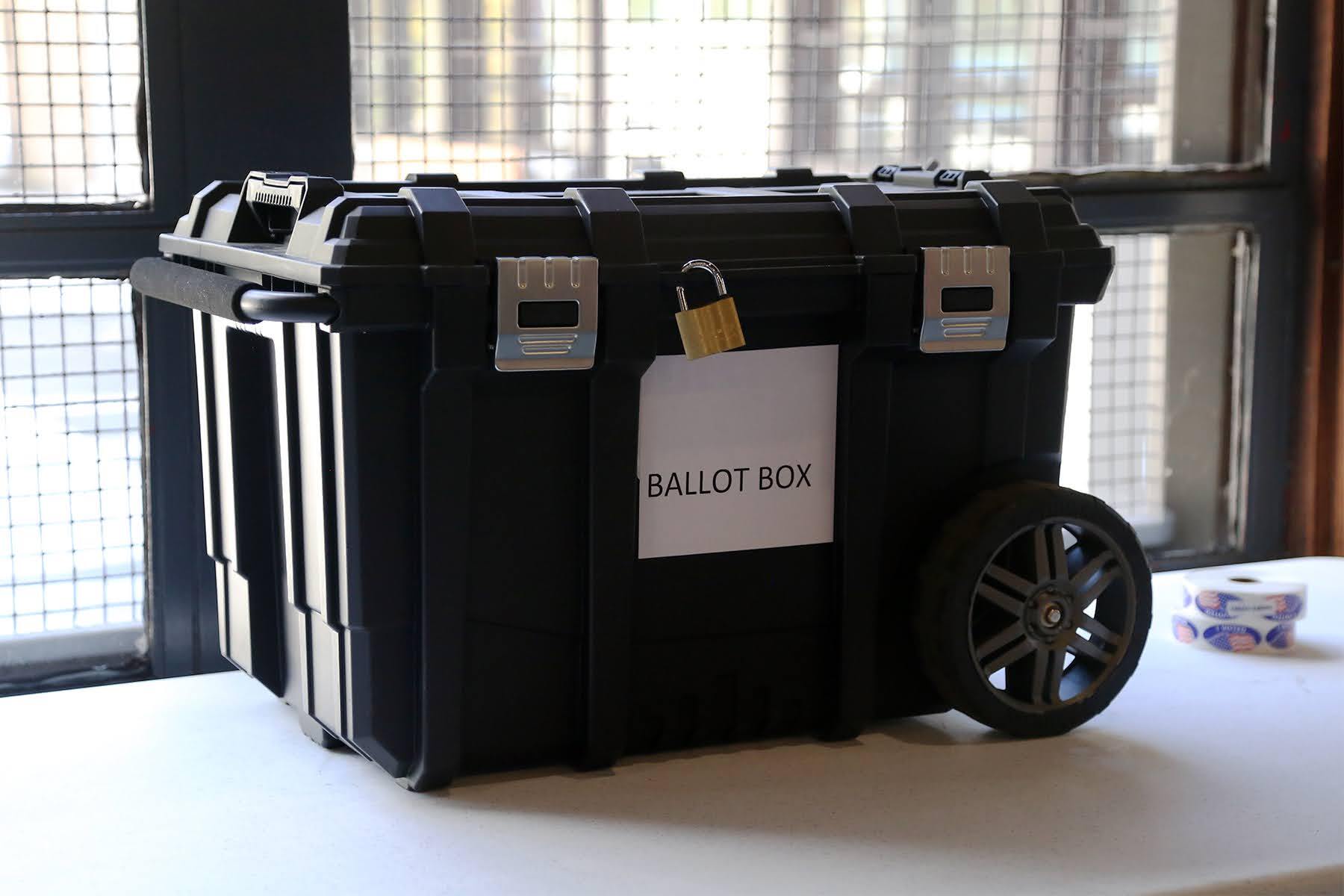 A ballot box at a satellite election office in Allegheny County. (Photo by Ryan Loew/PublicSource)

Sam DeMarco, a Republican member of the Allegheny County Council and Board of Elections, voted against certifying the county’s election results on Monday, saying his vote was a “protest vote” meant to call attention to problems with the way the election was administered. The board voted along party lines, 2-1, to certify the results over his objections.

DeMarco said late changes instituted by the governor, secretary of state and Pennsylvania Supreme Court resulted in confusion and inconsistency. Some counties used drop boxes; some, including Allegheny County, used satellite elections offices that technically fell under the designation of mail-in voting; the state Supreme Court granted the governor’s request for a three-day extension for ballots to be received by counties through the mail. None of this, DeMarco said, was laid out in Act 77.

“I think that they need to get serious, and the legislature and the governor need to come together and tweak this law to address the shortcomings that we’ve seen here in 2020 so that we can have confidence in our elections in 2021 and going forward,” DeMarco said.

“But I think mail voting is here to stay in Pennsylvania, and we can do some things to improve it, and give it a chance to flourish,” Deluzio said.

This view is supported by the history of other states that shifted toward universal mail-in voting long ago. Oregon began testing vote-by-mail in the 1980s, and by 2000 became the nation’s first state to vote exclusively by mail. Since then, turnout for presidential elections has consistently exceeded 80% of registered voters. Colorado has mailed a ballot to every registered voter since 2013, and its turnout hit 87% this year, with 90% of the votes deposited in drop boxes.

Those states had the luxury of testing and refining the vote-by-mail system over decades. Pennsylvania approved voting by mail just before COVID-19 arrived in the United States. Suddenly, the untested, unrefined system had to be relied upon to handle millions of votes in the most high-stakes election of our time.

“When you look at other states across the country that implemented this same type of no-excuse mail-in voting that we have, they spent years perfecting the legislation, making sure that they thought of every possible scenario,” Hallam said. “And there are so many that were just never considered in Act 77.”

Are we stuck with ‘election week’?

Mail-in voting is likely to account for a significant portion of ballots cast in Pennsylvania going forward, but that doesn’t mean we’re destined to spend an entire week waiting to learn who wins each presidential election. Avoiding that, Christmas said, depends on allowing counties to begin pre-processing mail-in ballots before Election Day.

That decision is up to the state legislature. This year, Wolf called for the change but the Republican majority in the legislature blocked it. Some counties had hundreds of thousands of ballots on hand prior to Election Day but couldn’t begin the long process of opening, unfolding and verifying them until 7 a.m. on Nov. 3.

“It was a manufactured crisis,” Deluzio said, asserting that Republicans in the legislature knew that their refusal to amend the election codes would lead to a prolonged count. “I hope that the general assembly can come together to [fix] this.”

Christmas said that while changes to election law are almost always politicized nowadays, there could be more room for dealmaking in Harrisburg without the pressure cooker of the 2020 election.

“I would be hopeful that — especially given the pain and hardship that local election officials, our poll workers, and the voters they served had to deal with, and we have some time to digest everything that happened — next year will be a much, much lower-profile election,” he said. “There will be a little bit more space for thoughtful deliberation and honest discussion.” 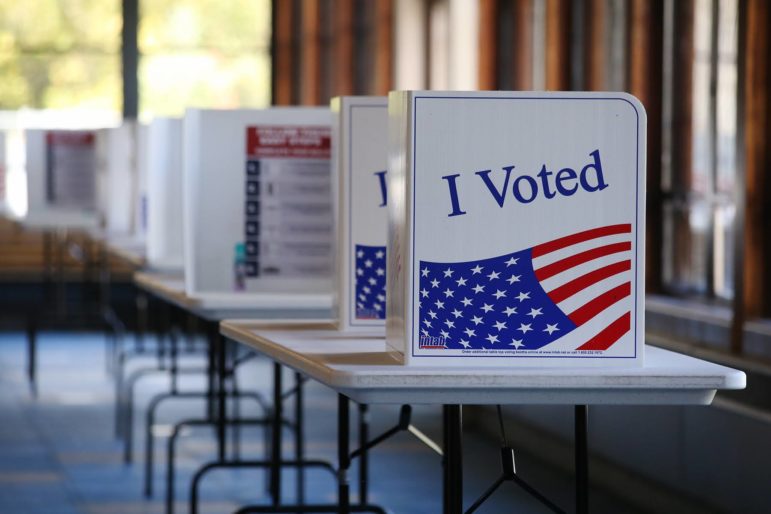 Tables set up for voters at a satellite election office in Allegheny County. (Photo by Ryan Loew/PublicSource)

Trump spent months leading up to the election pushing baseless claims that mail-in voting was susceptible to fraud, and his lies only intensified as the counting progressed in Pennsylvania.

“In terms of the timing and when we would see the results reported and how that would play out, I think it didn’t take a genius to see where that would go,” Deluzio said.

As Trump’s apparent 600,000-vote election night lead in Pennsylvania faded as mail-in ballots were counted, he seized on the fact that the country had never seen an election quite like this and falsely claimed it to be proof of fraud. In reality, experts knew the counting would go that way because mail-in ballots couldn’t be processed before Election Day.

All the while, Pennsylvania’s elections officials and some high-profile Democrats added a new job to their list of duties: combating disinformation. The governor, lieutenant governor, secretary of state, attorney general and numerous local officials took to the airwaves to tell voters the truth — that there is no evidence of widespread fraud.

Will combating disinformation continue to grow as a part of election officials’ job descriptions?

“I do think our election officials were put in a position [in 2020] where they had to speak directly to some of the conspiracy theories and the lies that are being put forward about how this election is working,” Christmas said. “I certainly wouldn’t be surprised, when we get to the midterms, I’m sure the allegations will crank up again. It will be incumbent on … our local officials and our local media to help us stay grounded in the truth.”

Hallam from the county Board of Elections said “it’s such a shame” that the voting process has become so politicized, and it is part of election officials' duty to dispel disinformation.

She said the top priority should be transparency. “People can’t claim that there’s any malicious wrongdoing going on, because everyone is able to see [with] their own eyes the entire process.”

Jesse Littlewood, a disinformation expert at Common Cause, said dispelling lies about election fraud is vital in promoting participation in democracy.

“Voters of all stripes are now receiving a really toxic message that even after you’ve overcome numerous barriers to case your ballot in the 2020 elections, the results of your vote are now being thought of as potentially suspicious or uncertain, and that may depress voter turnout in future elections,” Littlewood said in a media call Wednesday. “This will be another challenge that voters will have to overcome to participate in our democracy.”

This story was fact-checked by Amanda Hernandez.