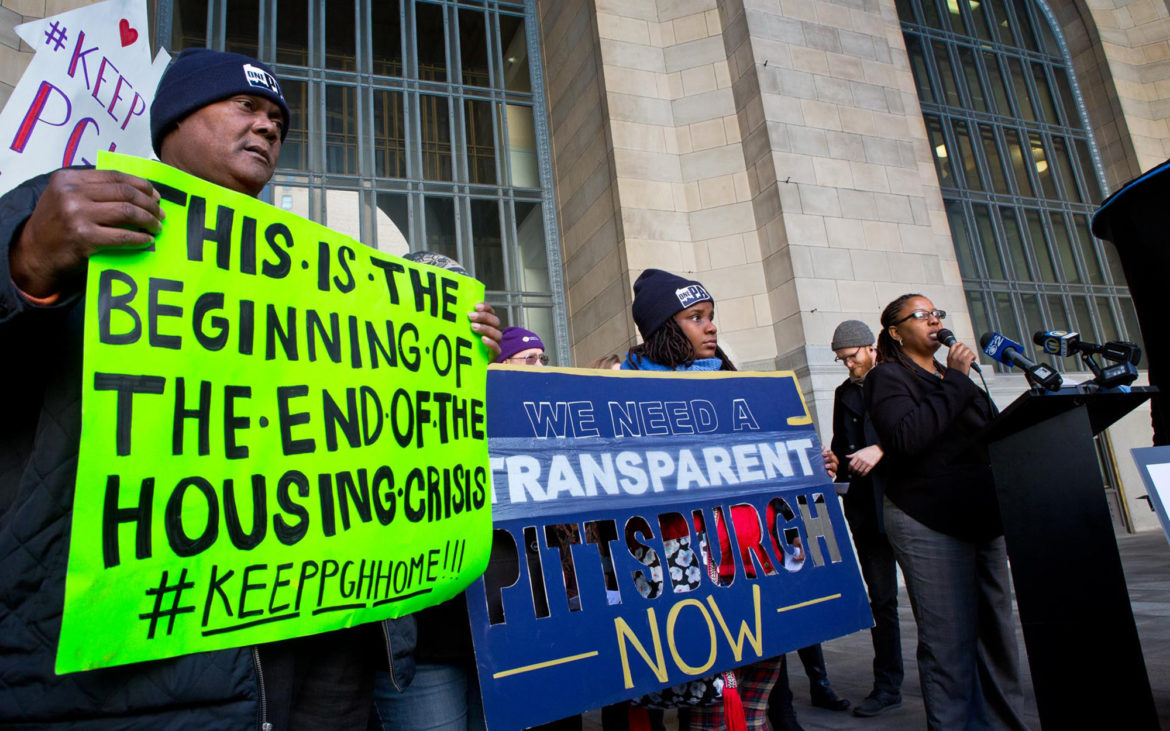 About two dozen protesters gathered in front of Pittsburgh's City-County building on Wednesday to speak out against the city's lack of transparency around its Amazon bid and other aspects of economic development. (Photo by Heather Mull/PublicSource)

“Hey, Alexa, how much in tax breaks and incentives has Amazon been offered to come to Pittsburgh?”

“Is Amazon promising to invest in schools, affordable housing and public transit in exchange for these tax breaks?”

Activist Satvika Neti led this exchange Wednesday morning with a supersized Amazon Echo-like prop in front of Pittsburgh’s City-County building on Grant Street. Another person stood inside the Echo prop and mimicked the pleasant ‘Alexa’ voice that consumers hear when they ask about the weather or traffic.

The interaction served as the centerpiece of a demonstration where participants called on officials to release details of the city’s bid for Amazon’s second headquarters. It was the first direct action related to Pittsburgh’s bid to Amazon, and organizers said it was the beginning of a broader campaign to push local leaders to make the city’s process of economic development more equitable and transparent.

What happened on Wednesday

Gathered in front of city hall, about two dozen organizers demanded that city officials release details of the bid submitted to Amazon and urged elected officials to take a holistic approach to economic development. They asked for decision-makers to take into account how new development affects housing prices, access to public transit and the types of jobs that come to the city. 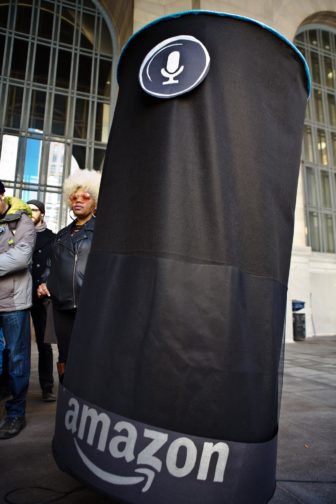 An organizer dressed as a supersized Amazon Echo participated in a call-and-response skit on Wednesday to protest Pittsburgh's refusal to release its bid for Amazon's second headquarters. (Photo by Heather Mull/PublicSource)

Pittsburgh United, along with the organizations SEIU Healthcare PA, SEIU 32BJ, One Pennsylvania, The Thomas Merton Center, The Women and Girls Foundation, Pennsylvania Interfaith Impact Network and Pittsburghers for Public Transit collaborated to stage the rally. Several people held signs, including one that read, “We need a transparent Pittsburgh now.” Organizers took turns calling on local leaders to include the community in the conversation around Amazon.

“The illusion is that we need a savior. We don't need some Amazon savior,” said Dylan Rooke, a local artist and activist who also works with the Hazelwood Cooperative Opportunity Guild, a coworking space and economic resource center. “If Amazon doesn't come to Pittsburgh or to our neighborhood, we still need to figure out a development practice that works for current Pittsburgh, not just future Pittsburgh.”

One of the organizers, Brandi Fisher of the Alliance for Police Accountability, said local leaders, including Mayor Bill Peduto and members of city council, were not invited to the rally because its focus was on community members.

“Do you have the bid in your hand?” she said. “Otherwise, you don’t need to be here.”

The rally on Wednesday represented a ratcheting-up of public pressure on Pittsburgh officials to release details of the bid the city submitted to Amazon in October. Until now, media outlets, including PublicSource, have fought to obtain the bid, and other organizations have held public forums and informational panels to discuss the potential impact of the company choosing to locate in Pittsburgh. Pittsburgh is one of 20 cities named as finalists in Amazon’s search to locate its second headquarters.

Organizers of Wednesday’s demonstration say the event was the beginning of a campaign to lobby officials to be more transparent about what the city has offered to the online retail giant. Fisher said she and others will be working to set up one-on-one meetings with each member of city council to lobby members to push Peduto’s administration to release the bid and to consider wages, affordable housing and public transit in conversations of economic development.

“This new money should benefit the people, not just the corporations,” she said. “We have to always fight to make sure people are put above profit.”

Fisher stressed that community members need to be in a position of power to demand transparency and accountability from local leaders when it comes to economic development. She said this is especially important for residents of neighborhoods that could be most affected. In the Amazon case, it is rumored that the city offered locations in the Hill District and Hazelwood neighborhoods.

“Do you have the bid in your hand? Otherwise, you don’t need to be here.”

Typically, Fisher said community members have to wait for information about development and, by that time, it’s too late to make changes to the plan.

Were the city to prioritize residents’ opinions, they could “go to the table with a little bit of power,” Fisher said. “We’re not underdogs begging for scraps, and I think it’s time for that transition.”

What local leaders had to say

After the demonstration,Councilwoman Deb Gross voiced her support for the activists and said she opposes the city giving tax breaks to Amazon and its CEO Jeff Bezos, who also owns the Washington Post. She stressed that the city couldn’t give any tax breaks without council’s approval.

“The city cannot offer anything without a council vote so there will be a public discussion, and I am not in favor of giving any tax breaks to the wealthiest human on the planet,” she said. “We're not just an office park. This is a place where people live and so it is unacceptable and not feasible for individual residents to be footing the bill for the infrastructure for large institutions, whether nonprofit or for profit. They should be paying their fair share.”

Council President Bruce Kraus declined to comment on the rally or any of the issues its attendees raised until he heard from them directly.

Tim McNulty, Peduto’s spokesperson, issued a statement in response to the protest:

“Mayor Peduto agrees with the demonstrators,” he said in an email. “Like them, he supports accountability and transparency, job creation, affordable housing, transit and community investment in the city."

Peduto has repeatedly said he can’t release the city’s bid because doing so would put the “trade secrets” of Amazon and other companies at risk and that revealing what the city offered would rob it of its competitive advantage. The state’s Office of Open Records ruled earlier this year that those were not good enough reasons to withhold the bid. Peduto’s administration is currently appealing the ruling in Common Pleas court.