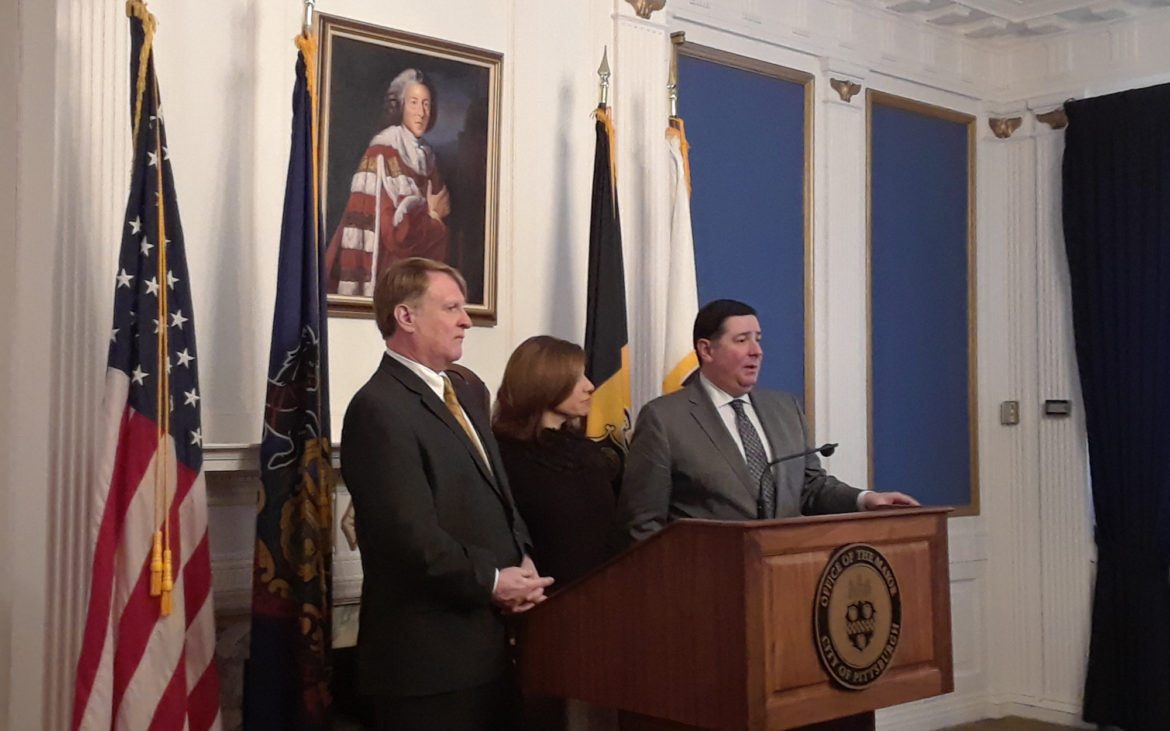 After three months of “frenzy,” as Allegheny County Executive Rich Fitzgerald called it, Pittsburgh has made Amazon’s shortlist along with 19 other cities to potentially become the home of the company’s second headquarters. The announcement is amping up the stakes for local officials as well as anxiety and excitement in the communities that have been deemed prime locations for the company.

Yet that announcement, which the retail giant made in a press release Thursday morning, doesn’t mean local officials are releasing any details about what they put in their bid to Amazon last year. At a press conference Thursday, Fitzgerald, Pittsburgh Mayor Bill Peduto and Allegheny Conference CEO Stefani Pashman said they would keep the proposal under wraps unless Amazon selects Pittsburgh in the end.

Peduto also said he has not gotten any community or neighborhood groups involved yet and likely won’t unless Pittsburgh’s bid wins out. But that approach, of waiting to involve communities, has made some residents and neighborhood leaders anxious.

At the press conference, Peduto defended his and the other officials’ decision to keep details about the city’s Amazon bid secret. He said the bid involved making potential deals with local landowners and developers and that releasing information about those deals would violate their rights and harm their businesses. The city doesn’t release details about other early-stage deals it makes with developers and it’s taken the same approach with Amazon, Peduto said. Amazon said it will work with the cities on its shortlist to develop their proposals further and the company is expected to make a final decision sometime this year.

“We don’t hold press conferences or send out what we’re discussing with the developers. If we did that, there wouldn’t be any developers coming to this town, or companies,” Peduto said. “When you’re dealing with public-private, it’s not simply public, it’s also private and you respect the interests, whether it’s property owners, developers, of what they’re proposing.”

Most of the cities that ended up on Amazon’s shortlist didn’t release any details of their proposals. The tax incentives made public include New Jersey (Newark is on the list) and Illinois (Chicago). New Jersey offered $7 billion in potential tax incentives, according to media reports. And the Chicago Tribune has reported that Illinois, Chicago and Cook County offered more than $2 billion in incentives.

Of the 20 cities named as finalists, only four — Philadelphia, Boston, Miami and Montgomery County, Maryland — made copies of their proposals public with varying levels of available information, according to MuckRock, a pro-transparency news outlet that’s filed 168 requests for bids from various cities.

If Amazon accepts Pittsburgh’s proposal, Peduto said, he will release the city’s bid and involve the public. He said there would have to be public hearings before city and county council, and the school board, if any local tax incentives are on the table. The state Legislature, too, would have to hold public debates if any state funding or tax breaks are involved. Community groups would be involved if things get to that stage, Peduto said.

“But until Amazon says, ‘Yes, Pittsburgh’...that process will be negotiated privately.”

“But until Amazon says, ‘Yes, Pittsburgh’...that process will be negotiated privately.”

Several news outlets, including PublicSource, have cases before the state’s Office of Open Records [OOR], appealing the city’s decision to keep its bid to Amazon private. Even if the OOR sides with the news organizations and tells the city to release the bid, Peduto said he would fight to keep it private.

“Oh, I would go to court,” he said. “We’re talking about the privacy rights of, not government, but of private companies. You can view it as big bad companies and however, but there are rights that individuals and the property owners have and you can’t take away those rights if they’re being done in a way that is completely legal and say no, we don’t believe in the law. That’s what the White House does.”

In a tweet Thursday afternoon, Allegheny County Controller Chelsa Wagner said that Pittsburgh making Amazon’s shortlist was cause for the city to release its bid in full.

“Now that Pittsburgh has been named among 20 "finalists" for Amazon's HQ2, it is time to follow our open records laws and basic tenets of good government and civic engagement and make this proposal public,” Wagner wrote. “The public should know what is being proposed and promised on our behalf.”

Now that Pittsburgh has been named among 20 "finalists" for Amazon's HQ2, it is time to follow our open records laws and basic tenets of good government and civic engagement and make this proposal public. The public should know what is being proposed and promised on our behalf.

However, Peduto said, every site the city proposed in its bid is “in conformity with the community-based plans in the neighborhoods.”

“We are only looking at those sites that have gone through the meetings in the church basements,” he said. “We’re not looking to change community plans.” That also includes not changing zoning laws for a given site, he said.

But even though he and other local leaders were conscious of community plans when they were pitching potential sites to Amazon, community members were not invited to meetings where those sites were discussed. Peduto said that’s how he approaches every meeting with potential developers.

“I don’t have community members in those meetings because if I did we would see no development in the city because no developer would trust city government. They would walk away in a heartbeat,” Peduto said. “It’s just the way every single democratic society operates.”

Marimba Milliones, the president and CEO of the Hill Community Development Corporation, said Amazon choosing Pittsburgh could be “major.” The influx of jobs alone would be significant, she said, but community members should have a seat at the table. The former Civic Arena site in the Lower Hill District has been named as a contender for a potential Amazon location, but Milliones said she hasn’t been involved in discussion about the company landing in her community.

She said she’d like to see a community benefits agreement drafted if the Lower Hill site is considered as Amazon’s next home. Those types of agreements can be “win-win,” she said, where both current Hill District residents and Amazon would benefit. If the site is selected, Milliones said she would expect Peduto and Councilman R. Daniel Lavelle, who represents the neighborhood, to “plan out and structure Amazon’s impact in the Hill.” If Amazon comes to the Hill District, she said, it’s going to require “critical and complex thinking” from city officials, Amazon and local residents.

“The idea of Amazon being located in the Lower Hill will have very serious short- and long-term effects,” she said. “What this ends up being for our city will depend on how we do it.”

Milliones was clear: Amazon coming to Pittsburgh could be beneficial to both residents and local business owners. But that doesn’t mean the city should ignore the potential problems the company could bring with it.

“We’re talking about 50,000 jobs coming to any part of Pittsburgh can have a tremendous impact on housing prices,” she said. “Pittsburgh is already struggling with affordable housing.”

Residents in Hazelwood, home to Hazelwood Green, another potential Amazon site, were also unsure how the company could affect their neighborhood.

Oyama Conyers doesn’t know much about the city’s Amazon proposal but he’s excited about the potential opportunity for a job. Conyers said he is finishing up a job training program at Community Kitchen Pittsburgh and hopes to be able to get a job cooking.

He has a criminal record, so to pay his bills, he would take other jobs as well. “I have to be open to whatever is out there,” he said. 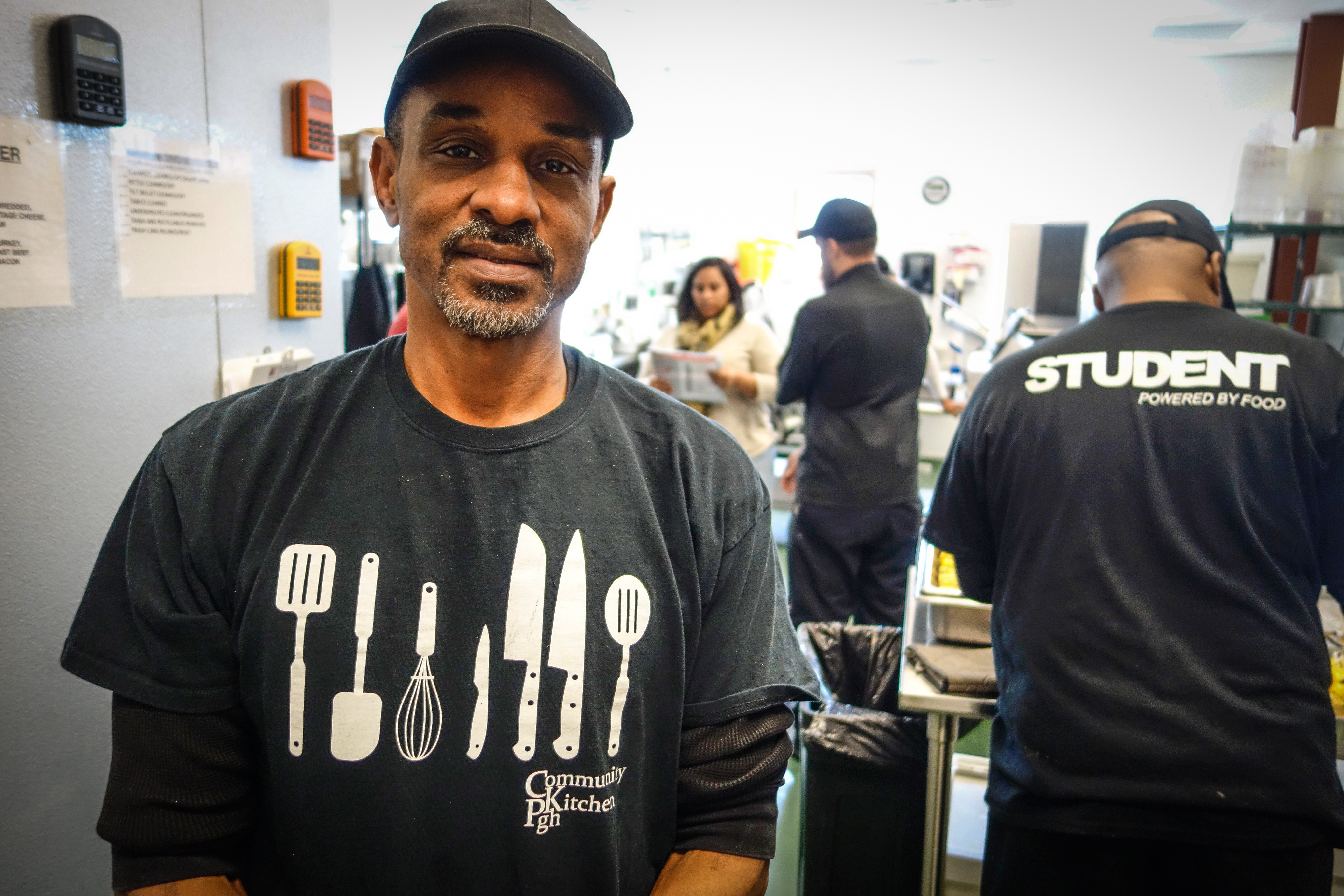 Oyama Conyers, who just finished up a job training program at Community Kitchen Pittsburgh, said he'd like to work in Amazon's corporate cafeteria if the company chooses Pittsburgh as the home for its second headquarters. (Photo by Oliver Morison/PublicSource)

But if Amazon built a headquarters in Hazelwood, he said he would apply for any jobs that opened in their corporate cafeterias.  And then he wouldn’t have to rush to buy a car because he could walk to work.

Saundra Cole McKamey, who runs a job training nonprofit in Hazelwood, said she is worried that Amazon wouldn’t hire people like Conyers.  She said she’s seen other nonprofits and businesses move into Hazelwood and only hire workers from outside the neighborhood.

“We welcome people to come to our community but with intentions of helping the residents, not just helping themselves,” McKamey said. “That’s not what’s been going out here in Hazelwood.”

She also would like to get more information about what jobs would be coming. “So we can train the people and get them ready for those jobs instead of them just coming in and doing what they want to do and not getting the residents’ opinion on what we would like to see out here,” she said. 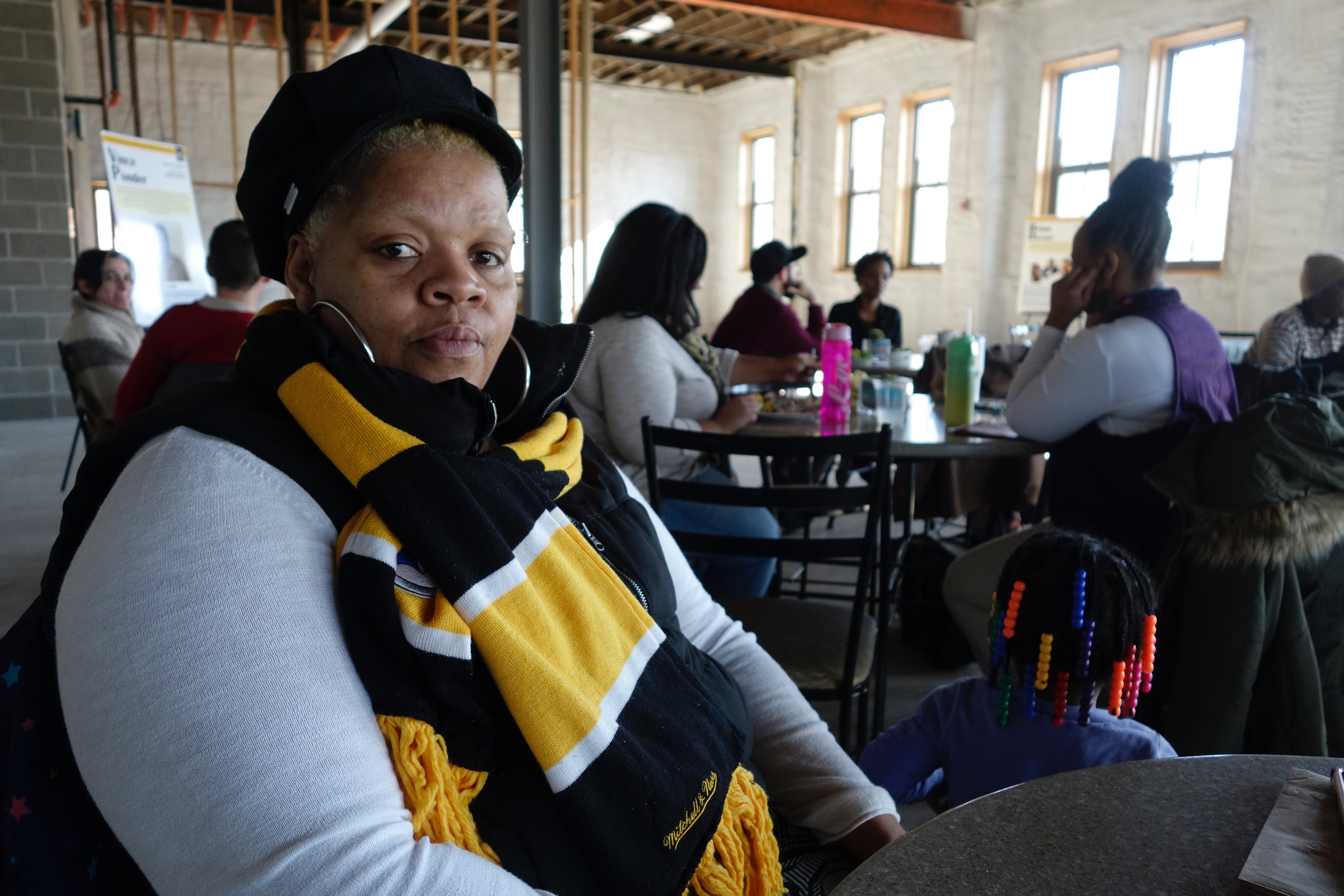 Saundra Cole McKamey, who runs a job training nonprofit in Hazelwood, said she's worried Amazon's jobs won't be open to everyone if the company chooses to locate in Pittsburgh. (Photo by Oliver Morison/PublicSource)

She’s also worried that the homeless population would explode, which she said she’s heard has happened in Seattle. Right now, she said, there aren’t many homeless people in Hazelwood.

“All I care,” she said, “is some of the residents out here get a fair share of those jobs that are coming.”