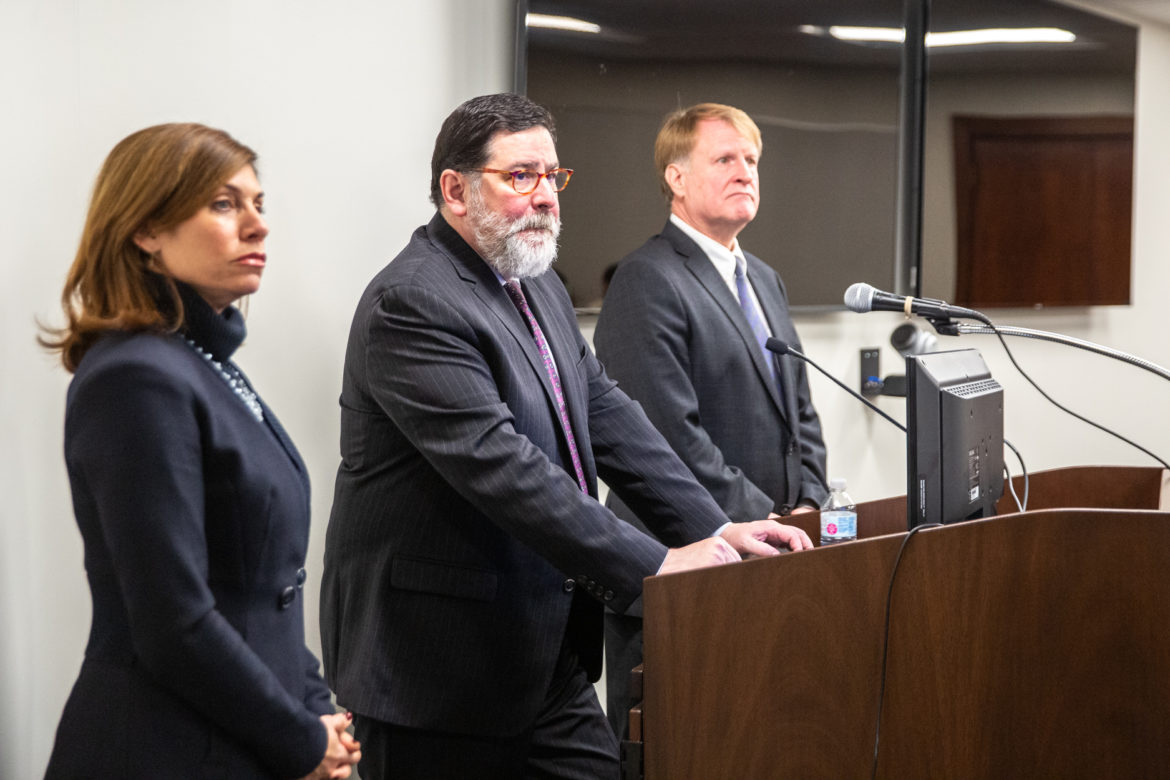 The Pittsburgh region was prepared to, in effect, pay Amazon nearly $80,000 per job if the company located its sought-after second headquarters here complete with a 50,000-employee workforce.

That figure — which equals about $4 billion in incentives over a 10-year period — was included in the region’s proposal to land Amazon’s second headquarters and released for the first time Thursday morning.

The incentives would have accumulated over time and were not strictly financial. Local officials also emphasized that taxpayers would not have been shouldering the cost of the incentives offered to Amazon.

Officials followed through on a promise to release the bid once the online retail giant finalized its decision; two days ago, Amazon announced its choice of New York City and Arlington, Virginia.

The primary incentives offered in the bid totaled $4 billion, a figure that was calculated based on the assumption that Amazon would roll out its $5 billion investment and 50,000-person workforce over 10 years. The $4 billion includes the $2.1 billion in local incentives as well as some of the state’s $4.6 billion incentive package. Here’s how that figure breaks down:

Local leaders, including Fitzgerald, Peduto and CEO of the Allegheny Conference on Community Development Stefani Pashman, said the incentives wouldn’t have been paid for with existing tax revenue. Rather, they said, the incentives would have been paid for by spending the tax revenue Amazon would bring to the region as well as funds raised from the state, local nonprofits and corporations. 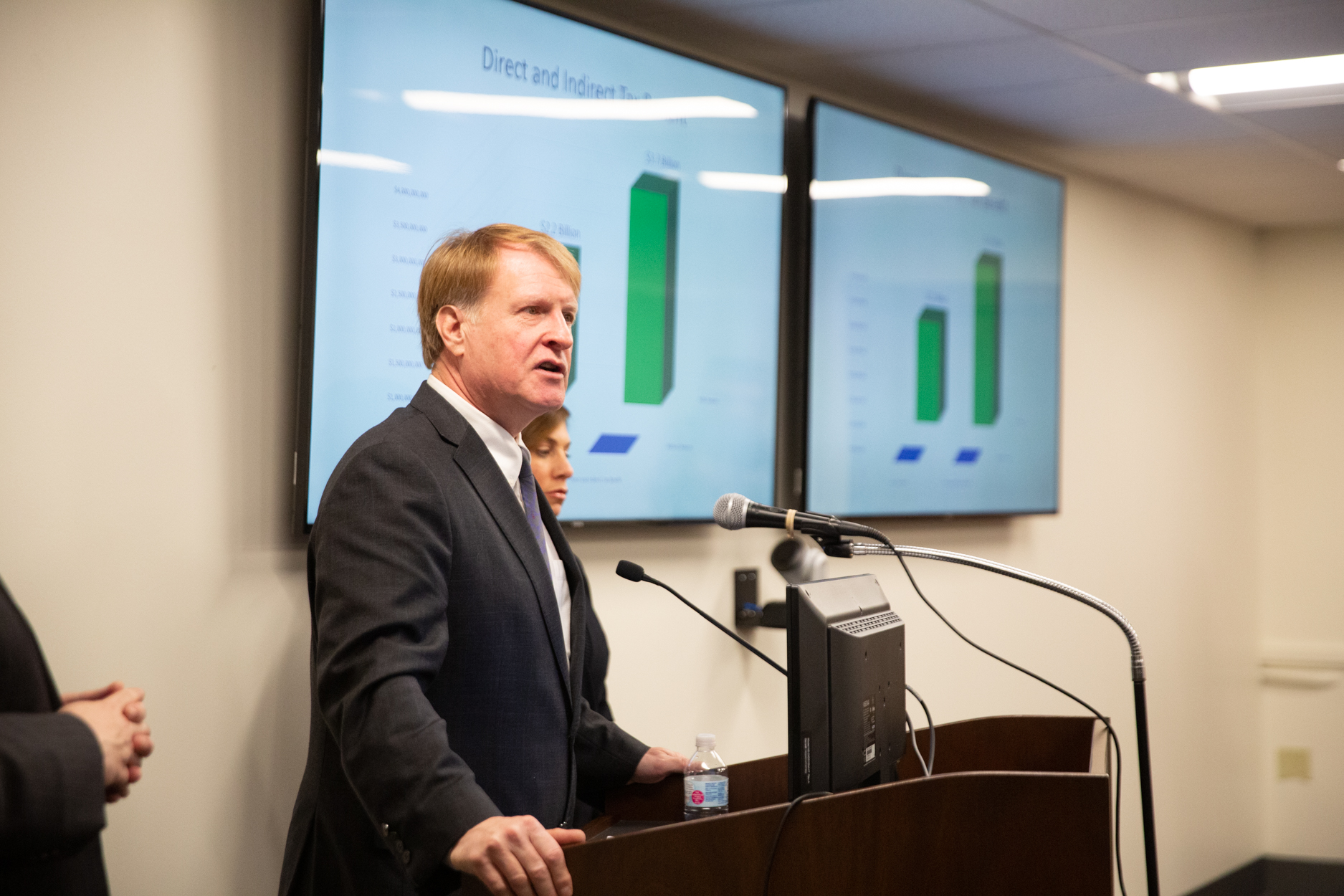 Allegheny County Executive Rich Fitzgerald discusses the potential benefits Pittsburgh would have received if it had been selected as a site for Amazon’s second headquarters. Nov. 15, 2018. (Photo by John Altdorfer/PublicSource)

Peduto rejected the notion that the incentives were akin to writing Amazon CEO Jeff Bezos a check.

“The issue of, ‘It was just going to go into Jeff Bezos' pocket,’ is not a fair or valid argument,” he said. “It would have gone back to the major issues that we have in this city and in this region and funded those initiatives to be able to make the benefit for all.”

Of particular note, Peduto said the incentives would have helped pay for replacing Pittsburgh’s lead lines and fund other improvements at the Pittsburgh Water and Sewer Authority [PWSA]. The city and PWSA have been grappling with a crisis of lead in the local water supply for years now with the authority this year beginning to replace lead lines in earnest.

As officials were speaking Thursday morning, PWSA released its 12-year plan, a document Peduto was waiting to receive before entertaining offers from private companies to take control of PWSA’s water infrastructure. Companies like Pennsylvania American and Peoples Natural Gas, which was recently acquired by the national water provider Aqua America Inc., have shown interest in acquiring the water authority.

“The issue of, ‘It was just going to go into Jeff Bezos' pocket,’ is not a fair or valid argument."

During the HQ2 process, Peduto, Fitzgerald and Pashman said any incentives offered to Amazon would have to go through the normal legislative channels at the city, county, state and school district. The proposal promised to make those processes go smoothly to guarantee the incentives and included letters from city, county, state and school district leaders pledging to do just that.

You can view the Pittsburgh bid here.

Pittsburgh’s Amazon bid included a total of 35 sites Amazon could have occupied, with five of those highlighted. They included: 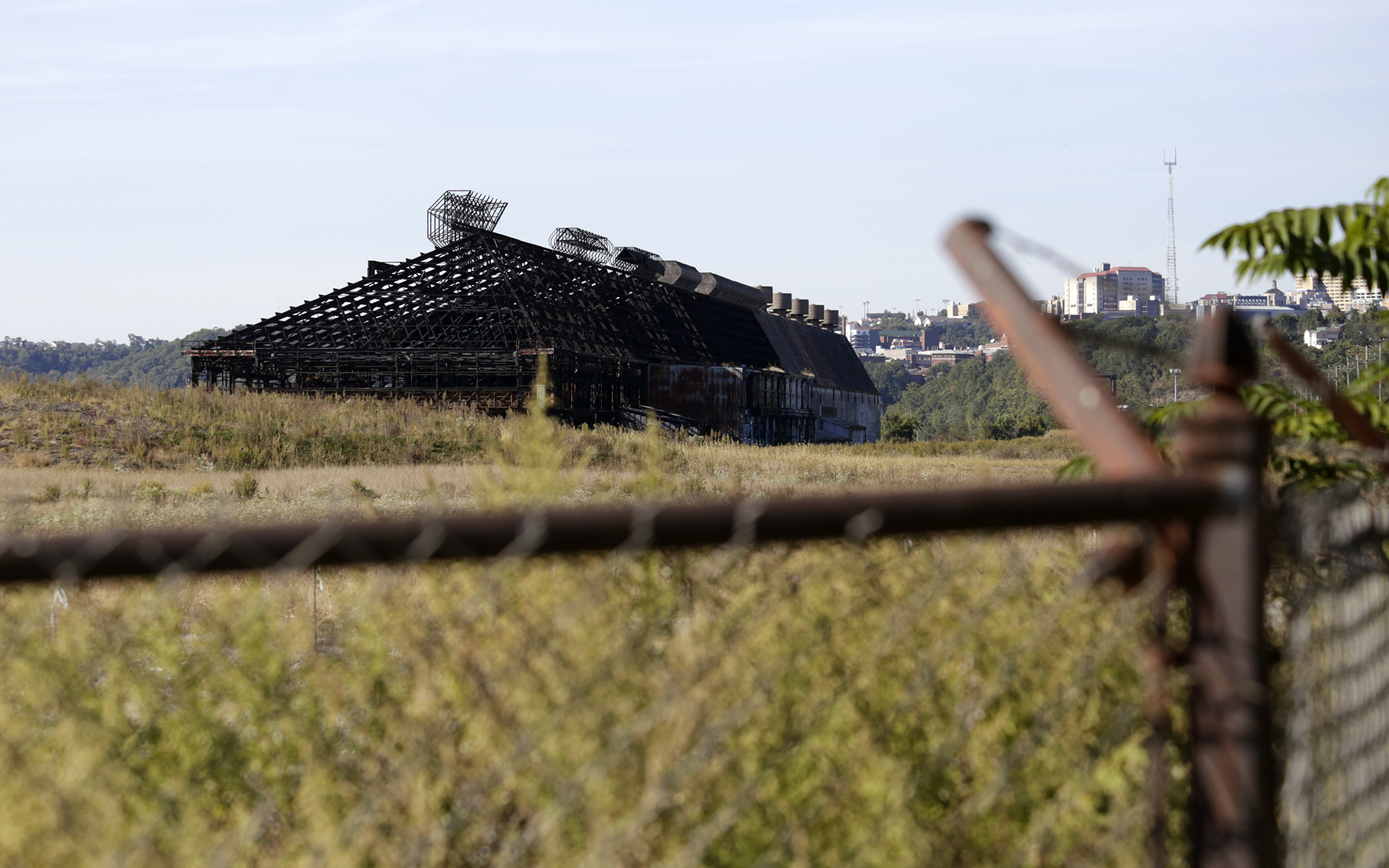 Included in the proposal was establishing a dedicated 100,000-square-foot research and development facility for Amazon on Carnegie Mellon University’s campus, which could have served as a place for students to train for jobs at Amazon. All sites included an initial 15,000 square feet of space at Carnegie Mellon University for Amazon to use for research and development. Called the PGH-AMZN LAB, the space on CMU’s campus “could focus on forward-looking exploratory research; prototyping of new technologies, products, services and entertainment; development and training of Amazon’s future workforce; or all of the above,” the bid noted.

The proposal also offered up the Century III Mall, Southside Works and Station Square as possible sites for Amazon. Monroeville and South Fayette Township also offered sites to Amazon. And, if Amazon had wanted to locate in Pittsburgh in 2018, the proposal offered 525 William Penn Place in Downtown, Nova Place on the North Side and space in the Strip District for the company to occupy immediately.

In addition to incentives and sites, Pittsburgh’s Amazon bid highlighted other amenities that could attract the company to Southwestern Pennsylvania. The bid touted the region’s low cost of living, a concentration of tech talent and short commute times compared to other cities. The bid cited Pittsburgh’s median monthly rent of $1,000 and median home price of $136,500. To address the issue of its small size compared to other cities, the bid declared that the region had housing available to absorb up to 400,000 new people.

The bid also cited the region’s talent pool, noting that Pittsburgh contained the country’s top computer science, new media and information technology programs and that 77,000 students graduate annually from colleges and universities within a 200-mile radius of the city. The bid also highlighted the city’s commitment to help fund and implement universal pre-kindergarten education for all Pittsburgh children, as well as other STEM and STEAM education opportunities for children.

Since Amazon made its announcement on Tuesday, Peduto said he, Fitzgerald and Pashman had spoken to Amazon executives briefly, during a “5 to 10 minute” phone call. Chief among the reasons Amazon didn’t pick Pittsburgh for its second headquarters was its small size. Amazon  executives praised the city, Peduto said, but said that Amazon was looking for a place that it wouldn’t have as big of an impact on. 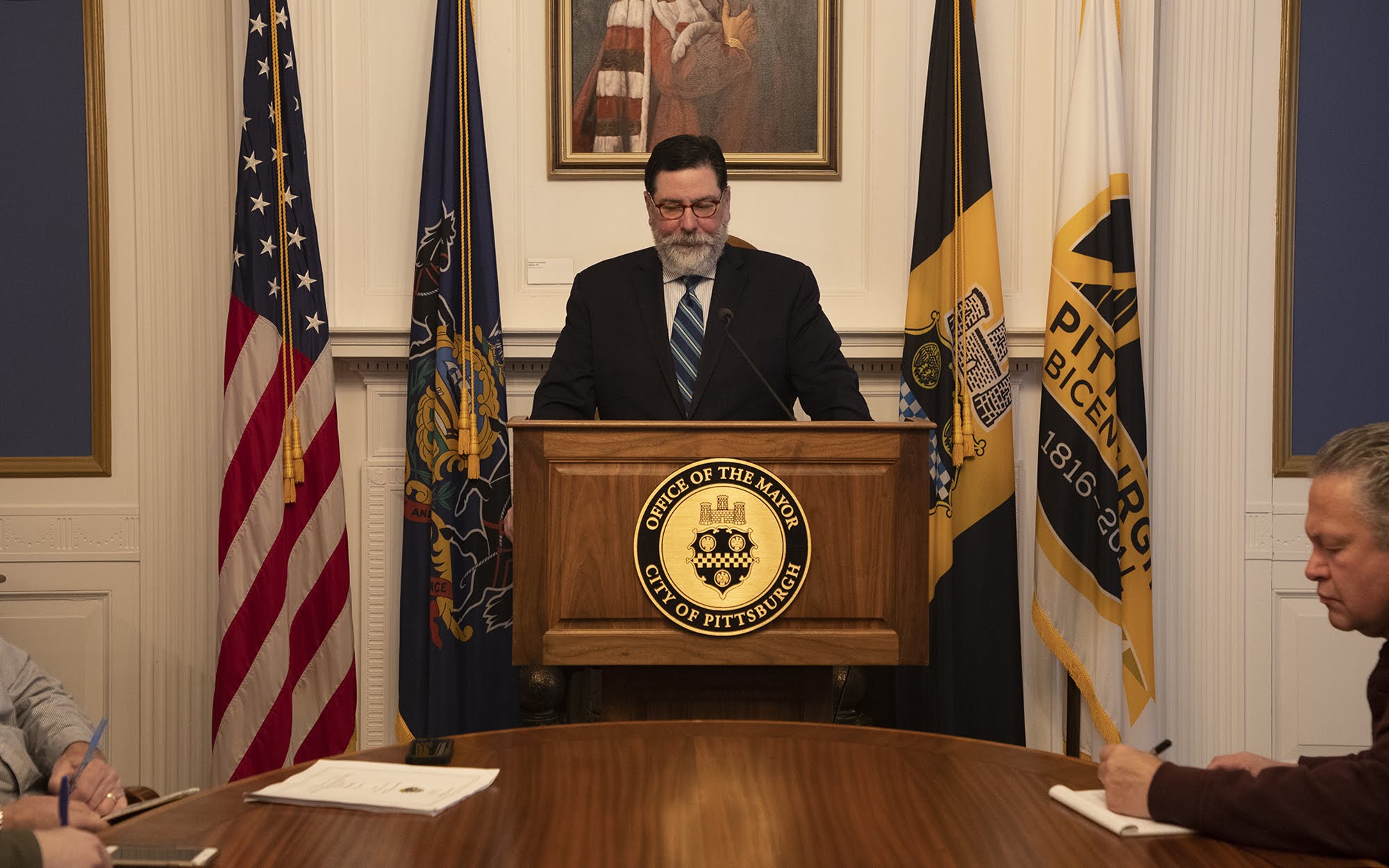 Mayor Bill Peduto speaks to the media after the city of Pittsburgh doesn't receive the Amazon bid. (Photo by Kat Procyk/PublicSource)

“It was sort of like that conversation you have when you're breaking up, 'It's not you it's me,’” Peduto said. “They could not have been more complimentary towards Pittsburgh and Southwestern Pennsylvania.”

A more in-depth debrief is in the works, he said.

Looking forward, Peduto said he wasn't worried about Amazon using the data and information it submitted to the company for any ill-meaning purposes, as some critics have cautioned. Among the critics is Greg LeRoy, executive director of Good Jobs First, which tracks government subsidies to private companies. He has said Amazon pulled off a major feat in managing to collect data on 238 cities for free. Peduto said he doesn’t believe Amazon could ever use Pittsburgh’s data.

“I read a lot of the articles around the country about all this data and how it was just a ploy to get data. Data has a shelf life of bread. Data is useless after six months,” Peduto said. “It is, and needs to be, real-time data and tech giants don't use data after a month. So anything that we gave to them is basically already useless.