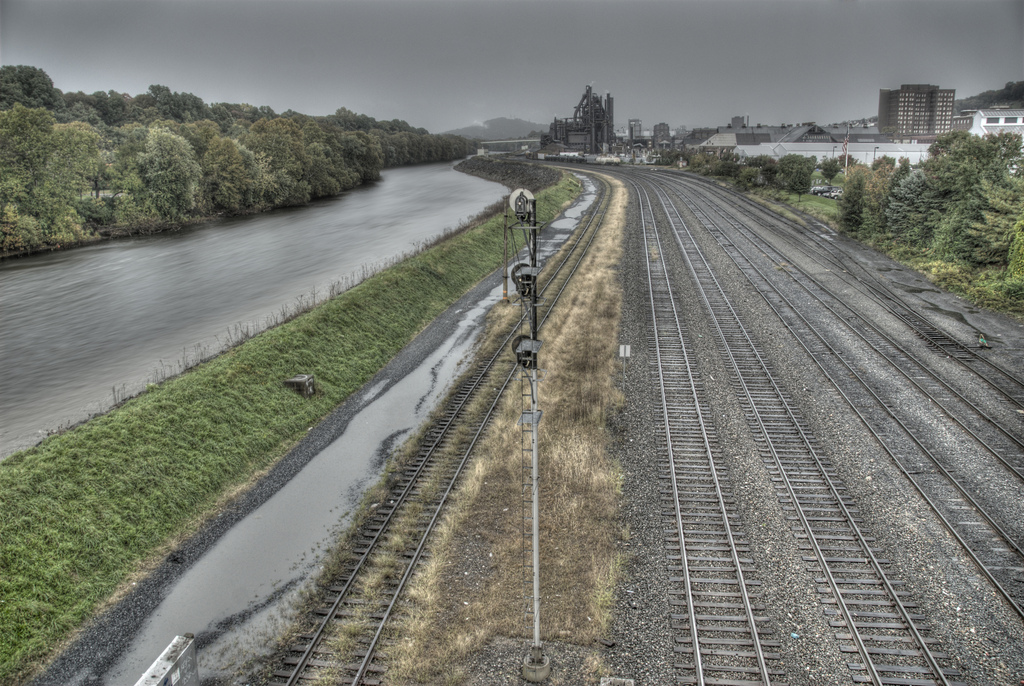 In 2013, an unmanned train carrying fracked American crude oil ran off the rails in Lac-Mégantic, Quebec, incinerating the center of the tiny Canadian town and killing 47 people — most of whom were burnt to the point that their bodies were only identifiable by DNA and dental records.

Since the crash, more derailments (though none deadly) have occurred across North America, intensifying public calls for more government scrutiny and stricter safety rules for shipping crude oil. Here are some of the biggest stories on this issue from 2015.

Images of billowy orange fireballs and charred tank cars flung like spilled toothpicks across railroad tracks appeared on our TV screens more than once this year. At least seven train crashes have occurred since February on oil routes across North America.

The crashes highlighted the vulnerability of tank cars and underscored problems with railroad inspections and track maintenance.

On Feb. 16, a CSX train careened off the rails in Mount Carbon, a small West Virginian town about 250 miles south of Pittsburgh. A federal investigation found a broken rail caused the crash that sent 27 cars off the tracks, resulting in a spill of 378,000 gallons of Bakken crude oil and a fire that burned for days. One house was destroyed and more than 1,000 locals were evacuated.

A Bloomberg analysis of federal data shows that 2015 was the costliest year for crude oil train derailments, with $29.7 million in damages — a big increase from $7.5 million in 2014.

Under intense public pressure, the U.S. Department of Transportation [DOT] announced in May a two-year-in-the-making rule package to boost crude-by-rail safety. The rules included standards for a stronger tank car and laid out a schedule for retrofitting and removing DOT-111s and CPC-1232s — the older tank cars involved in many oil train crashes — over several years.

While the feds called the rules their “most significant” effort on improving crude oil train safety, everyone else seemed downright angry about the rules. Stakeholders on all sides quickly sued.

Environmentalists were ticked about the tank car retrofit schedule, arguing in a lawsuit filed in federal court in May that the rules establish “an unduly long phase-out period for tank cars that are prone to puncture, spill oil, ignite and harm communities in train accidents.” The oil industry filed a court challenge in the U.S. Circuit Court of Appeals in Washington D.C. to have the rules thrown out, claiming the phase-out timeline was too tight for the industry to meet.

Signed into a law in December after five years of discussion, the massive $305 billion federal transportation bill included provisions to boost oil train safety. Most notably, the bill closed a loophole in the U.S. DOT’s May rules that would have allowed DOT-111 tank cars to be used in service on trains that carry fewer than 35 cars full of oil in total or with 20 tank cars of oil in a row.

The December transportation bill makes it so DOT-111 tank cars won’t be allowed to move petroleum product past March 1, 2018; implements a system that allows states and local officials to request inspection reports for rail bridges privately owned by railroad companies; makes local governments eligible for 80 percent federal funding for financing safety improvements at dangerous railroad crossings; and cements a law that requires railroads to hand over information on oil train shipments and routes to state officials and local first responders. The bill also funds a study to look at how much insurance railroad companies should carry in case of accidents.

Although rail safety has been regulated by the federal government since 1970, legislators in some states with heavy crude-by-rail traffic have passed laws, changed policies and commissioned safety audits after a spate of oil train derailments stirred fears among residents.

Pennsylvania Gov. Tom Wolf commissioned a rail engineering professor to look at how the state and railroads could do more to prevent derailments.

But to date, Pennsylvania, unlike other states with heavy oil train traffic, has not yet passed any laws to boost prevention and emergency response initiatives.

PublicSource published a story in November highlighting what other states have done in this arena, including Washington state, which put a fee on barrels of oil moving into the state to help pay for emergency response efforts.

The rail industry quickly sued the state claiming federal law preempted California state law. In June, a federal court dismissed the case because the state hadn’t yet started enforcing the law. The law is now in effect.

A federal investigation into the Mount Carbon derailment found tests performed by a CSX contractor showed an internal rail flaw on two separate dates prior to the Feb. 16 crash. Neither the railroad nor the contractor followed up on the issue and the rail broke under the oil train, causing the crash.

Following that investigation, the Federal Railroad Administration [FRA] announced new track standards in response to the incident. Much of the focus by federal regulators up until that point had been on other facets of rail safety, including tank car integrity and lowering speeds for oil trains. The West Virginia investigation highlighted another important aspect, broken tracks, which account for about a third of all rail accidents. Federal railroad officials released a safety advisory, urging railroads to conduct closer and more detailed inspections when defects or rail flaws are suspected.

Additionally, the FRA intends to use its authority to draft new rules for worn rails, something the freight railroad industry has fought hard against in the past. "We try to look at absolutely every place where we can affect and improve safety," Federal Railroad Administrator Sarah Feinberg told The Associated Press. "Track generally is the place that we're focusing at the moment, and it's clearly overdue. Rail head wear is one place in particular that we feel like needs to be addressed as soon as possible."