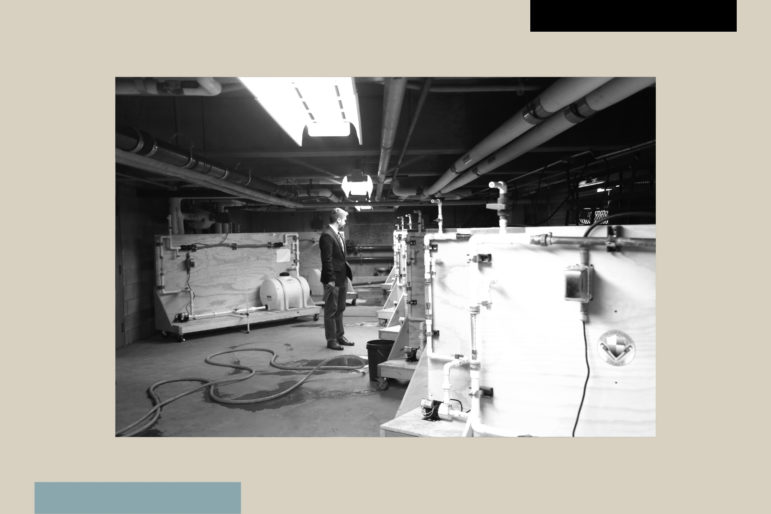 Pittsburgh mother shares COVID anxieties amid colder weather and returning to the office.

Part 8 — Privatization pitch: How close PWSA came to being privatized

The additional attention from the lead crisis had set off a more general sense of crisis at the Pittsburgh Water and Sewer Authority.

PWSA couldn’t keep its executive directors. Bob Weimar had just taken over as interim executive director, the fourth leader in just over a year. The billing problems weren’t getting resolved. And some of the long-standing issues the authority faced, including its need for improved infrastructure, were finally coming to the fore.

In the same month that three board members resigned in 2017, Mayor Bill Peduto hired an outside consultant to analyze how the authority should be reformed and appointed a Blue Ribbon panel to choose the consultant and add to their recommendations. The panel was made up of water experts, nonprofit leaders, former board members, city employees and community advocates.

These multipronged crises were both a threat and an opportunity for environmental activists in the city.

Part 6 – The key moment: How three PWSA board members ignited the authority’s turnaround

The tension between the mayor and the board of the Pittsburgh Water and Sewer Authority hit a breaking point in March 2017. For more than two decades, PWSA’s board members had balanced their responsibility to manage the authority with the desires of the mayor and city council who appointed them. The ambitions of the mayor typically won out and the water system deteriorated. At the beginning of 2017, PWSA still could not send out accurate bills and, in many cases, stopped sending out bills at all. In the past year, lead contamination in the city’s water had risen above the federal action level, and the public outcry had reached fever pitch."It had become the biggest problem in the city,” Mayor Bill Peduto said.

When Pittsburgh’s lead-in-the-water crisis news broke in 2016, I was a Ph.D. student in sociology at Pitt. I knew my scholarship could not be separate from my activism. A few months earlier, sensing that lead contamination in the water could be more of a widespread problem nationally than was understood amid a focus on Flint, I decided to test my own Greenfield home’s lead-water levels.

The results came back at 100 ppb lead level. That’s about seven times higher than the level that the Environmental Protection Agency says is safe and 100 times more than what scientists think is safe. Many people think an academic’s role is to stand back and study people, processes and institutions in a neutral way.

Despite what you may have heard, 2016 was not the first spike of lead levels in Pittsburgh's water. And it did not directly coincide with the conclusion of three years of management by Veolia Water either.  In fact, lead levels had been spiking in fits and starts for more than 15 years, according to data the Pittsburgh Water and Sewer Authority reported to the feds.

At PWSA’s lab, there hadn’t been a lot of worry about lead, said Jay Kuchta, a microbiologist there for 30 years before retiring in 2014. Kuchta’s home had lead pipes and his tests were coming back with little to no lead in them. The city’s lead levels were increasing but rarely above the lead threshold set by the U.S. Environmental Protection Agency [EPA].

Pittsburgh’s overall population didn’t change dramatically in the 2010s, according to the 2020 U.S. Census, but the city underwent notable change in terms of race and age. “These are all important things in a region that has seen decline for many decades,” said Christopher Briem, a University of Pittsburgh demographer. “The city is still declining, a little slower, but there’s been massive changes within the composition and characteristics of the city’s population.”

Pittsburgh in 2020 had 302,971 people, a 0.89% drop from its 2010 population, according to data released Thursday. The rate of decline in the decade was much lower than what the city experienced during the 2000s, when it decreased by more than 8%. Race
Pittsburgh’s two largest racial groups declined faster than the city overall during the 2010s.

"It absolutely raises a concern about enforcement, and the Health Department, whether they have enough staff to carry out this function." — state Rep. Austin Davis, D-McKeesport

The case for stormwater fees in the Pittsburgh region

PWSA: After the Crisis
After record-setting rainfall and flash floods in recent years, the need for action across the Pittsburgh region is clear.

In 2018, I created the Pittsburgh Urban Flood Journal where I’ve been documenting, mapping and writing about flooding issues as they happen. The reason I’ve been doing this is to raise awareness about flood-prone areas. I hope the information I am collecting can one day lead to fixes to our flooding issues for the health and safety of our neighborhoods. As a professional civil engineer, this is my duty. Local leaders and engineers need to develop flood mitigation strategies to better manage stormwater before it causes damage.

PWSA: After the Crisis
Although the Pittsburgh Water and Sewer Authority has typically focused on providing clean water and transporting sewage, recent years have presented a newer, pressing challenge: the city’s flooding, landslide and basement backup problems.

The water authority [PWSA] has proposed a new stormwater fee, which will charge customers according to how much rain water hits their roofs and pavement. The revenue will help PWSA address its flooding challenges as it continues to try to remove sewage that overflows into the city’s rivers when it rains. These problems will only increase as climate change intensifies the city’s rainwater problems, according to Tony Igwe, the person PWSA has hired to direct these new efforts. Igwe talked with PublicSource about his background, how the agency will prioritize the tens of millions of dollars in projects and why he thinks state Rep. Ed Gainey, the victor of the Democratic primary for Pittsburgh mayor, will ultimately support new projects despite pledging not to raise water rates. What do you think is the most important trait that you bring to the job?
I think honestly the greatest skill for me may be to be able to look at things from a weird angle because of an eclectic background.

FROM THE SOURCE PODCAST

Crystal Jennings and Ed Nusser represent City of Bridges Community Land Trust. They believe building permanent affordable housing and increasing community control through homeownership is a way to address displacement and development throughout changing neighborhood housing markets in Pittsburgh. Jourdan: Hello, everybody, welcome back to Episode 12. From the Source, it's Jourdan again, we're back this week talking about community land trusts. Now, for those of you who have been with PublicSource for a while, we've been covering the affordable housing movement for the last few years.

Welcome to "By The Book: PGH K-12 Bulletins," which provides updates on emerging and ever changing news in the Pittsburgh K-12 education landscape. With more than 40 school districts across Allegheny County, the Bulletins will update you on the region's latest education news, including close coverage of the Pittsburgh Public Schools, other Allegheny County school districts, the Pennsylvania Department of Education and other important agencies, which serve thousands of Pittsburgh families. Please check back frequently and email tylisa@publicsource.org with questions, tips or Bulletin ideas. Follow along on Twitter with the hashtag #PGHed for news updates on Pittsburgh education. 5/25/21: Allegheny County names first director of Department of Children Initiatives
A new Allegheny County director is tasked with better preparing children for success, especially in communities in which preschool and after-school programs have long fallen short.