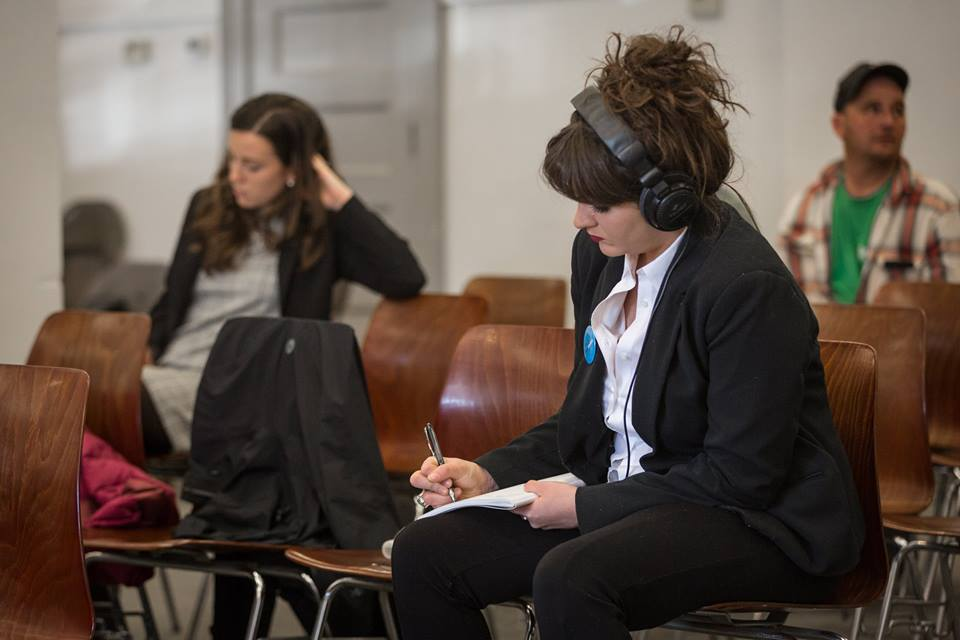 Brittany Hailer, a reporter for PublicSource, working on a story.

My father is an alcoholic, but I’ve always felt the need to further explain his addiction. Alcoholism doesn’t seem to quite cut it. My father drank excessively, deeply. He’d drink dozens of Coors Lights until he was steeped in psychosis. Eventually, his drinking and behavior became so violent, he was evicted. It was winter in Pittsburgh. He had no heat. No water. He walked out of his trailer, into the naked trees and didn’t stop.

Somehow, I found him.

I picked him up on the side of the highway in the snow. He hadn’t showered in weeks and his teeth ached from decay.

Every day, I feared a phone call from the coroner.

But, it’s my job to call the coroner.

From 2017 to 2018, I investigated the opioid crisis in Southwestern Pennsylvania. In January 2018, Gov. Tom Wolf signed a 90-day statewide disaster declaration. This declaration has been renewed every 90 days and is still in effect as of July 2019.

In November 2017, my father lost housing.

As a journalist, covering opioids for my beat, I am supposed to ask the question, “Why?” I interviewed counselors, doctors, psychiatrists, first responders and nearly all of them couldn’t answer that question.

But, nearly all of them said addiction, not opioids, is the root of the problem. They agreed that most opioid users suffer from co-occurring mental illnesses and addictions, many are victims of sexual assault and violence, many have experienced the trauma of incarceration.

Addiction is complex, rooted in either genetics or mental health issues, and should not be met with punitive action, but therapy, rehabilitation and empathy.

Once I interviewed a specialist in addiction who was full of valuable information about opioids and alcoholism. She said alcohol-related deaths aren’t as apparent as opioid overdoses and they, too, are on the rise. Alcoholics could die from heart attack, liver failure, accidents at home or suicide. I nodded, perhaps, a little too eagerly.

“Do you have any proximity to addiction?” she asked.

During my reporting, two of my subjects died from either drug-related violence or overdose. Another disappeared right before we published a story about her recovery. Several relapsed and are in active addiction. These aren’t subjects who I interviewed briefly on the street. They are characters developed over months of reporting. I know their children, their sponsors, their pet cat. I attended the funerals because, each time, I was the only person to sit down and record their life story. I had hours of audio their children wanted.

I also attended the funerals because I hoped it would prepare me for my father’s. I thought, if I could get through this grief, I could handle the call from the coroner. I would know what flowers I’d pick. I’d handle his death calmly and with dignity. I wrote essays exploring and questioning what would kill my father first: the bottle or the gun.

"I also attended the funerals because I hoped it would prepare me for my father’s."

At the height of my father’s alcoholism, I had to call the coroner for an assignment.

In a funeral home, the coroner described when he had to tell parents their child died in an abandoned house. At the time, his county was in the top 3 of overdoses per capita in the state of Pennsylvania. I was tipped off to call him because his friends noticed how overwhelmed he was. One told me, “He has a staff of four and he signed over 100 overdose death certificates last year.”

I didn’t tell the coroner he might find my dad’s body one day by the river.

The perfume of lilies followed me to the car. I couldn’t remember a lot of the interview. I had trouble focusing on the road as I drove home.

Later that night, I had to fact-check a different story. The fact-checker grew frustrated with me and my copy riddled with typos. I couldn’t listen back to the audio and transcribe. I couldn’t write.

Exasperated, the fact-checker called me and said, “How does this keep happening?”

I didn’t tell her that my father was dying in the street as I wrote about others experiencing the same reality. I could have, and perhaps, should have. I just kept repeating to myself: Journalists are supposed to remain unbiased, clear-eyed and objective.

For weeks, I questioned whether I could call myself a proper journalist. I seriously considered quitting right then and there. I was keeping this big secret. I was the child of a homeless alcoholic. Could I honestly write about addiction and mental health as I experienced the same trauma so close to home? 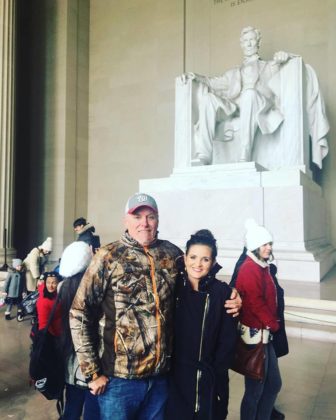 Brittany and her father posing in the Abraham Lincoln Memorial in Washington D.C. on Thanksgiving Day, 2018.

The Dart Center for Journalism and Trauma is a resource center for journalists. Their fact sheet “Covering Trauma: Impact on Journalists” lists “exposure to drug-related conflict,” “exposure to traumatic events in one’s personal life,” “empathy”  and “exposure to higher intensity assignments” as major risk factors for journalists’ mental health. The report concludes that journalists are at higher risk for PTSD, however, “The impact that trauma exposure and symptoms of PTSD have on a journalist’s ability to perform their job is only starting to be examined.”

I wondered how I kept writing stories like these: stories about parents who have overdosed in front of their children, of mothers fighting for a second chance to raise their babies, of fathers returning home from prison and earning college credits.

I gravitated to this kind of work because of my father. I couldn’t seem to get him off the street, but I could write a story about a reformed drug dealer who now counseled youth addicted to drugs. I could find hope in that journey, despite there being absolutely no hope in my own.

But like many recovery stories, the hope came seemingly out of nowhere.

I interviewed Dr. Neil Capretto about six months before he died of small cell carcinoma of the gallbladder, a cancer so rare that fewer than one in 100 million people have been diagnosed.

Capretto was one of the nation’s leading addiction specialists. He saved my father’s life. Capretto’s message to fellow medical professionals was to listen. He believed that each patient had a true and vital story to tell and, for addiction treatment to work, professionals had to learn to shut up and listen to what the patient has experienced and what they believe will help.

After Capretto’s story ran, we kept in touch. He’d update me on his treatments, and one day asked me if my life had been touched by addiction. He was intuitive like that. I told him about my father and he immediately asked, “Is he over 50?” He asked if Dad had previously received treatment in rehab centers with people suffering from opioid use disorder. I said yes.

“Do you think I could call him?” he asked. 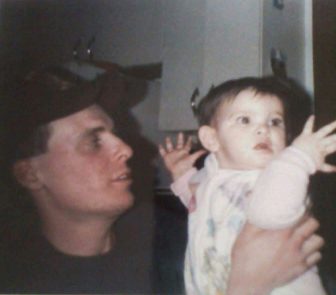 Brittany, as a child, and her father in a picture from her childhood.

Capretto knew Dad would have never survived in a typical rehab center. I knew that, too. Dad had a bout of sobriety in 2015. He relapsed after so many of his friends died from overdose. Many of them were half his age. Many of them were women my age. I asked Dad about this again while writing this piece.

“I was in my late-40s, burying 20-something-year-old girls who saw me as a father figure. I was their pallbearer because they didn’t have anybody. To do that every week or month was scary. They reminded me of you. A lot of them did. I relapsed,” he said.

Capretto understood the trauma and grief my dad had experienced. He needed to tell my dad that his fears were valid.

My father told me later that he had attempted to shoot himself. He’d placed the shotgun at his feet and at the last minute, slipped, blowing a hole through the side of his trailer. A couple of days later, he was out in the snow — drunk, aimless, not caring whether or not I’d find him.

But somehow, we’ve been lucky: he’s survived both the bottle and the gun.

My father’s been sober since early 2018. He talked to Capretto through the last months of his life. They talked about trauma, me, God and the power of storytelling. Dad quit drinking through a hodgepodge of approaches: a sponsor, Alcoholic Anonymous meetings, yardwork, dogs, moving out of Pittsburgh and hundreds of miles away, medication, therapy, volunteer work and talking with Dr. Capretto as he died.

"This story shows how sometimes the connections we make through journalism are only human and some people take it upon themselves to not let them disappear."

This story shows how sometimes the connections we make through journalism are only human and some people take it upon themselves to not let them disappear. Dr. Capretto recognized that my father needed help and showed radical empathy.

In the year that followed my father’s sober date, I got my first book published. A lot of it is about his alcoholism and how it shaped my life. When I have readings, he comes, sits in the front row and beams. He read the book over and over. He has one copy in the bathroom and one on his bed stand.