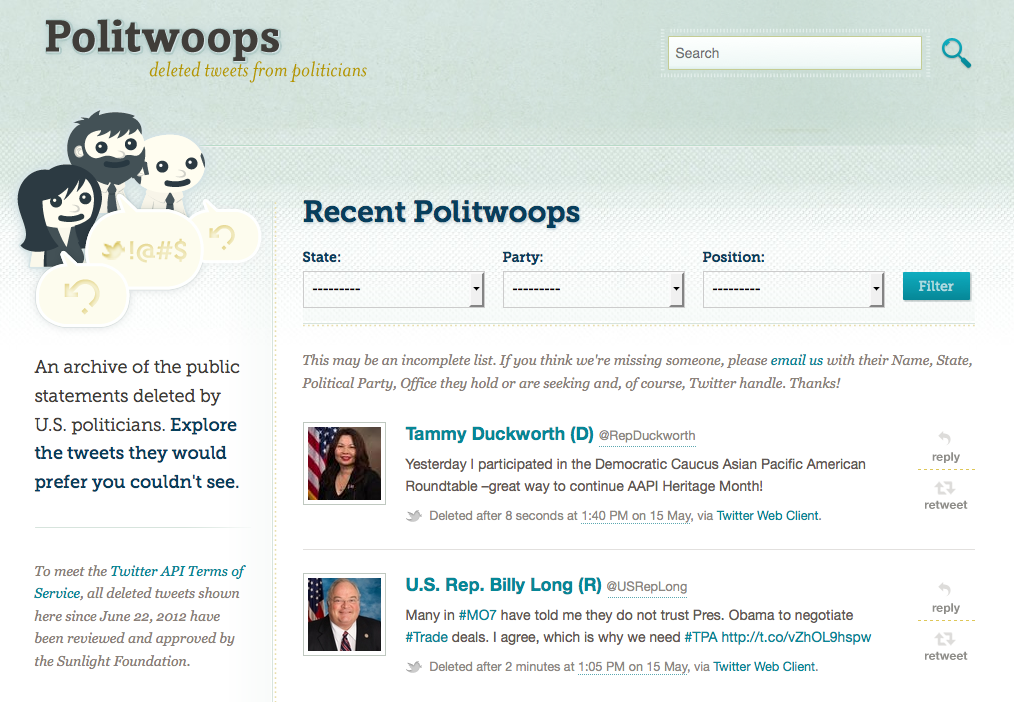 Twitter recently blocked Politwoops — a project created by The Sunlight Foundation that archives deleted tweets by politicians — from being able to automatically access and save all of those tweets.

In a statement to Gawker, which broke the news, Twitter said:

“We strongly support Sunlight’s mission of increasing transparency in politics and using civic tech and open data to hold government accountable to constituents, but preserving deleted Tweets violates our developer agreement. Honoring the expectation of user privacy for all accounts is a priority for us, whether the user is anonymous or a member of Congress.”

However, according to the U.S. Supreme Court, politicians and other public figures have a different standard of privacy than private citizens.

And social media websites, like Twitter, have increasingly become a way for politicians to communicate with the public, according to a post by Sunlight Foundation President Christopher Gates.

When we launched Politwoops three years ago, our goal was to create accountability and a  public record for the messages elected officials and candidates for president, vice president, Congress and governor published on social media, particularly those public statements they delete.

Politwoops uses Twitter’s application programming interface (API), which provides access to Twitter’s data so it can be automatically referenced. The project had been archiving politicians’ tweets since 2012.

The move unexpectedly came three years after Twitter acknowledged the project violated its developer agreement and allowed it to continue anyway, Gates wrote.

We are truly mystified as to what prompted the change of heart, and it's deeply disappointing to see Twitter kill a project they had supported since 2012. It is also disturbing to us that our feed was cut almost three weeks ago and our only direct communication came from Twitter last night, when we were told that their decision was not something that we could appeal...

The service has been useful for journalists and others trying to track politicians. For instance, as The Washington Post wrote, “The reason Anthony Weiner is no longer a member of Congress is because he sent a photograph of himself in his underwear to someone on Twitter.”

Politwoops caught the quick reversal of a number of Republicans reacting to the release of Sgt. Bowe Bergdahl in exchange for five Guantánamo Bay prisoners. One of the deleted tweets showed Sen. Thad Cochran’s (R-Miss.) approval of the exchange before it became the GOP’s position to denounce the deal.