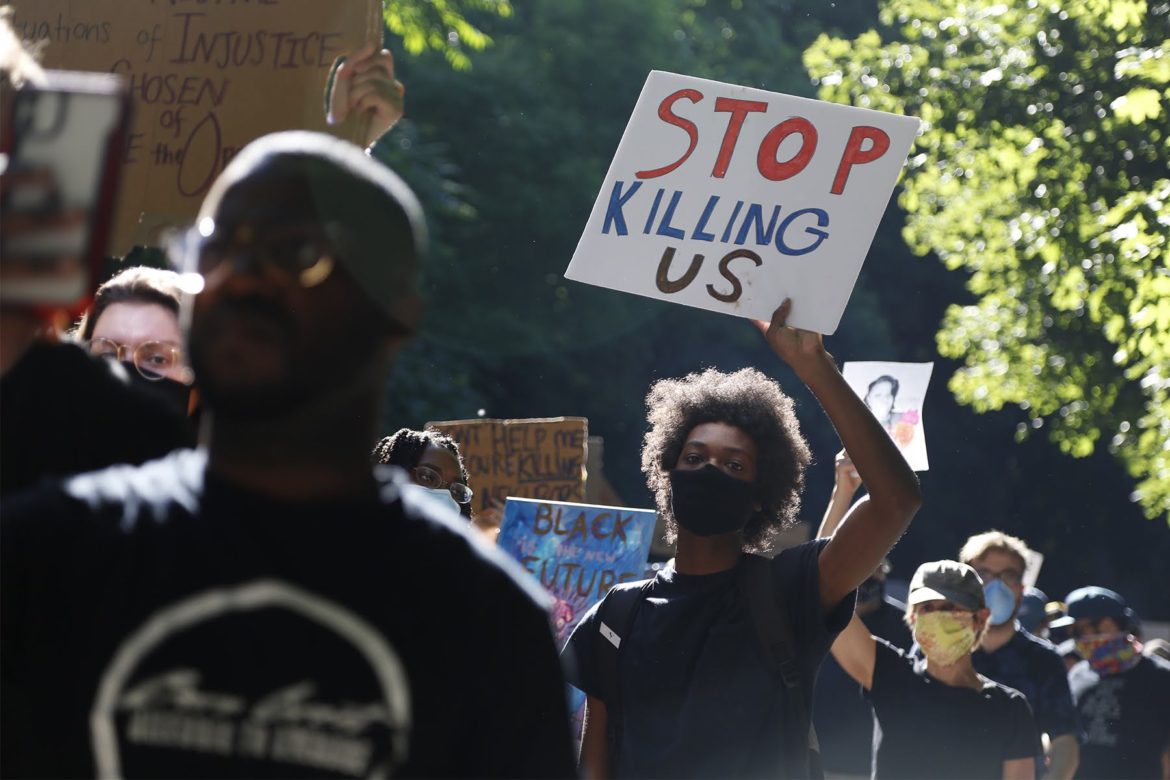 Chanting filled the streets from Mount Washington to Downtown on Sunday evening, as people marched from Grandview Overlook to Market Square via the P.J. McArdle Roadway and Smithfield Street Bridge.

The march was organized by the grassroots organization Pittsburgh I Can’t Breathe [PICB], and drew a massive crowd of demonstrators on the ninth day of protests in Pittsburgh against racism and police violence.

“We don’t want to be out here marching every day. It’s 2020. Why are we still talking about racism?” PICB organizer Kyna James, 30, said to the crowd before marching began Sunday afternoon.

Organizers decorated the march’s starting point in Mount Washington with white balloons. “Each one of these balloons represents the souls lost by police brutality,” said PICB founder Dasia Clemons, 24, of South Side. “These are the souls of our people.” 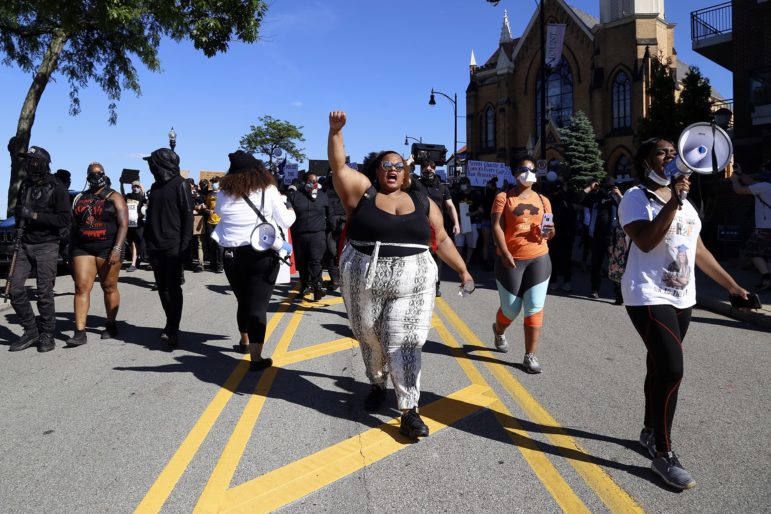 Participants were encouraged to take a balloon, write a name or message on it and march with it before tying it to the Smithfield Street Bridge. “We’re going to mark the bridge so that everyone can see, and we can symbolize the lives we’ve lost,” Clemons said.

Clemons’s daughter, Harmony, 6, also spoke at the event. “I have the mark of a young warrior,” she told an enthusiastic crowd. “I have a dream, just like Martin Luther King.” 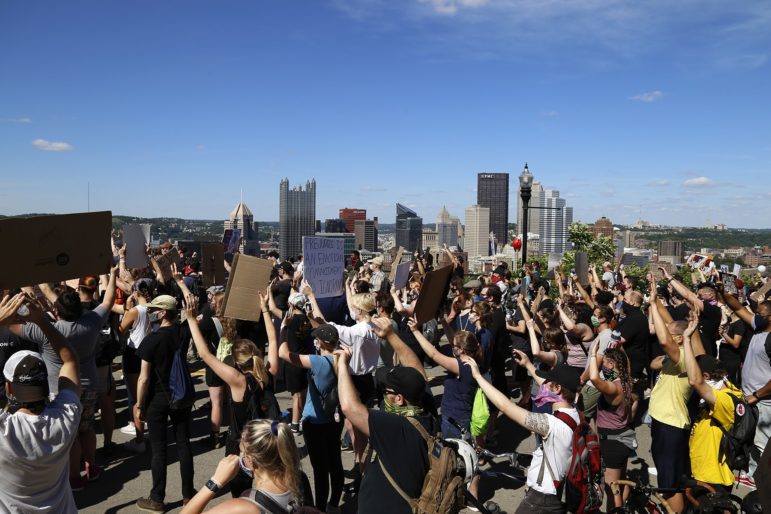 Protesters gather at the Grandview Overlook in Mount Washington on Sunday, listening to speakers before marching to Downtown Pittsburgh. (Photo by Ryan Loew/PublicSource)

About halfway through the march, the organizers stopped the crowd at the intersection of the Liberty Bridge and Arlington Avenue, where they held an extended moment of silence in honor of Breonna Taylor, who would have turned 27 on June 5. She was shot and killed in her home by police in Louisville, Kentucky on March 13.

The organizers encouraged participants to address the crowd there and share their experiences about police brutality against Black people. 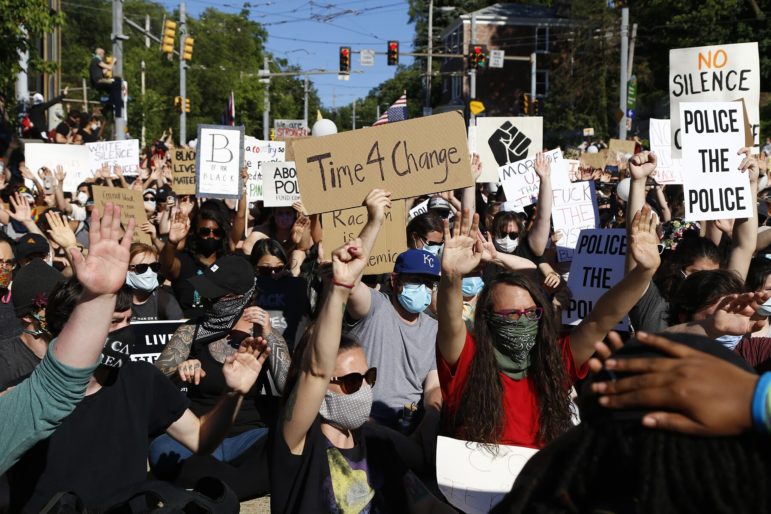 Danielle Akamba, 23, told PublicSource she was marching because “enough is enough” and to exercise her freedom of speech. “Democracy is not doing its job,” she said. “So we’re going to show them what democracy looks like.”

Police officers who were stationed at several locations throughout the were met with the chant, “I don’t see no riot here. Why are you in riot gear?” 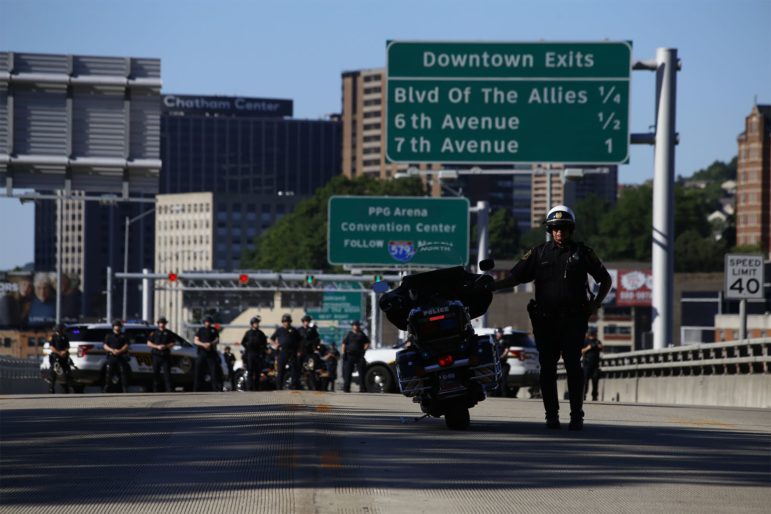 A police officer on the Liberty Bridge watches as protesters proceed down P.J. McArdle Roadway from Mount Washington en route to Downtown Pittsburgh on Sunday. (Photo by Ryan Loew/PublicSource)

On Friday, Schubert knelt with protestors in a demonstration in Beechview and defended criticism in a post on the Bureau of Police Facebook page. In a May 29 statement, he called the actions of the police officers involved in George Floyd’s death in Minnesota “incomprehensible and senseless.” 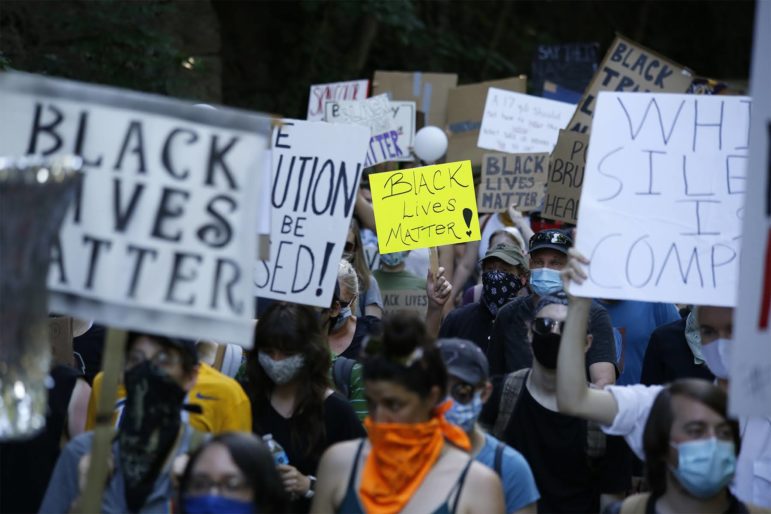 Earlier in the day, several hundred people lay in the grass and on the walking path at Point State Park for 8 minutes and 46 seconds, the length of time prosecutors said Derek Chauvin, a Minneapolis police officer, kneeled on the neck of George Floyd before he died.

The Sunday demonstration, which included several dozen speakers, marked the ninth day of largely peaceful protests in the Pittsburgh area against racism and police violence.

“I know that the protests are going to die down… what are we going to do after?” Tanisha Long, 30, of Crafton, asked the crowd. Long, who served as a moderator for the demonstration, runs a Black Lives Matter Facebook group for Western Pennsylvania. “At this point, we have to start making change.” 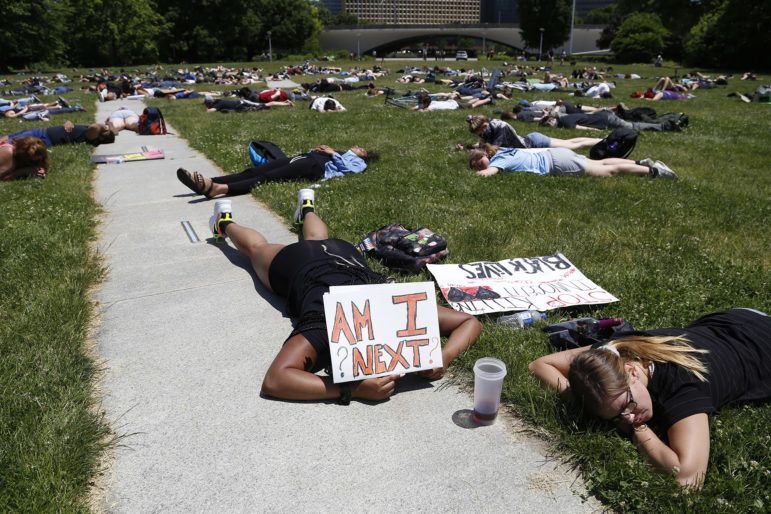 Hundreds of people lie on the ground in silence at Point State Park Sunday for eight minutes and 46 seconds, the amount of time prosecutors say a white Minneapolis police officer had his knee on George Floyd's neck before he died. (Photo by Ryan Loew/PublicSource) 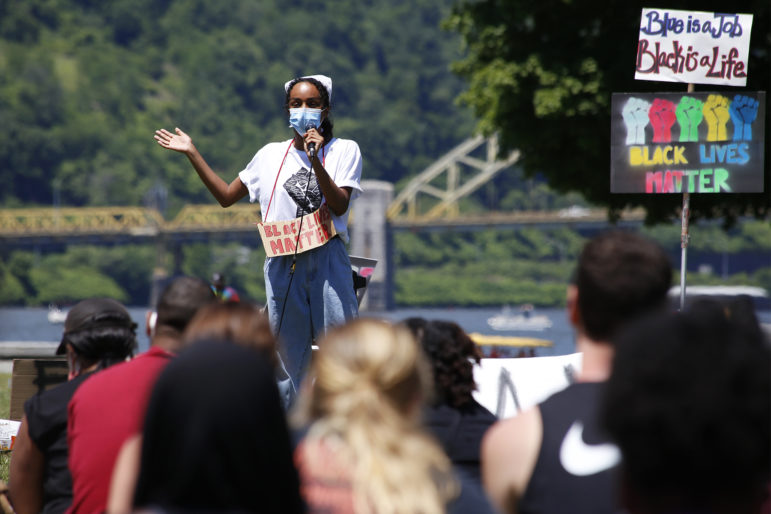 Phoenix White, 20, of Canonsburg, speaks before a large crowd of people gathered at Point State Park Sunday for a demonstration against racism and police violence. (Photo by Ryan Loew/PublicSource)

While praising the recent protests, she also called for increased Black representation in politics and educational spaces and encouraged attendees to vote.

The event ran for about three hours, and participants were encouraged to address the audience and share their personal experiences with racism and privilege. Several dozen attendees spoke. Calise Cowans, 12, of Braddock received a standing ovation after reading a poem she wrote called “White Privilege.”

“She brought me out. She wanted to voice her opinion on what’s going on,” Cowans’s grandfather Terrance Murtaza, 69, said. 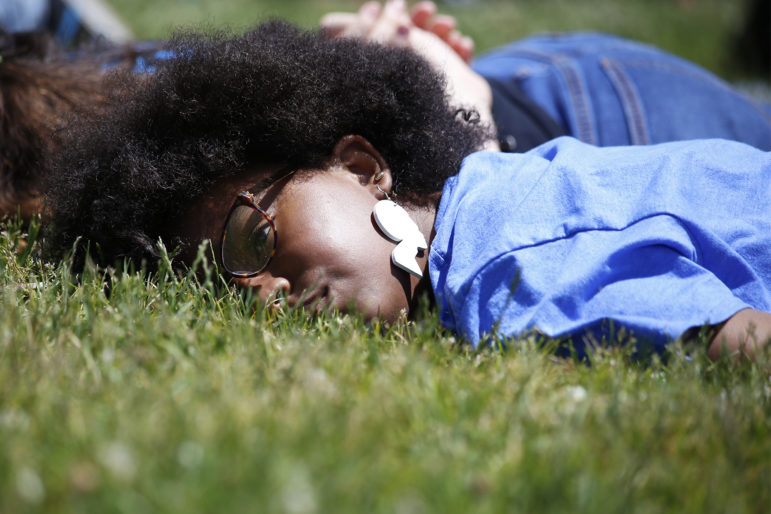 Twelve-year-old Calise Cowans, of Braddock, lies on the ground in silence alongside hundreds of others at Point State Park Sunday for eight minutes and 46 seconds, the amount of time prosecutors say a white Minneapolis police officer had his knee on George Floyd's neck before he died. (Photo by Ryan Loew/PublicSource) 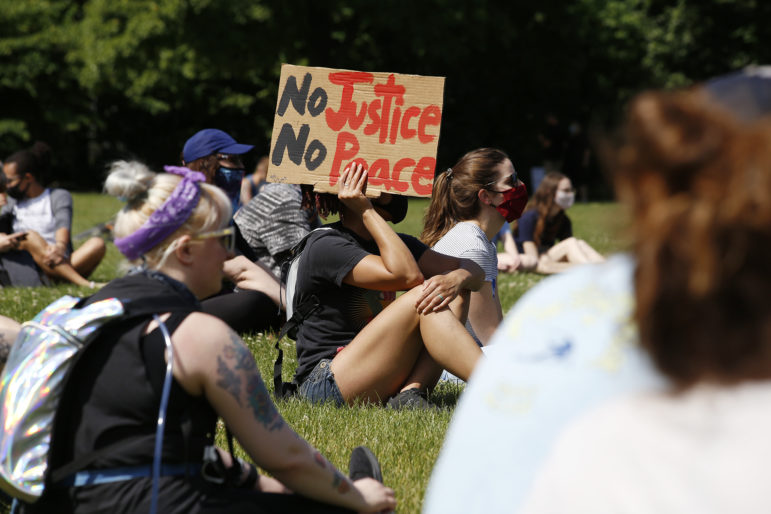 Hundreds of people gathered at Point State Park on Sunday for a demonstration against racism and police violence. (Photo by Ryan Loew/PublicSource)

The event ended with the crowd lying on the ground in silence in memory of Floyd, whose death has led to worldwide demonstrations against racism.