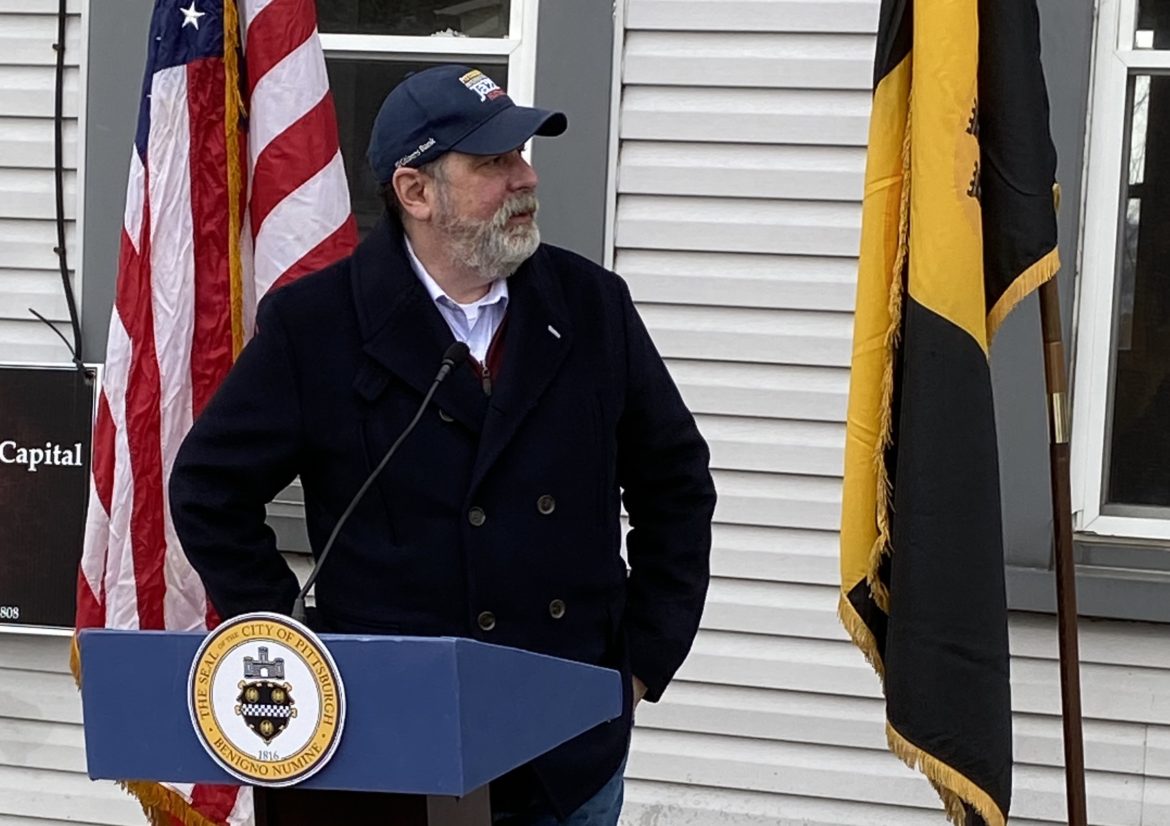 Housing prices nearly quadrupled in Fineview over the decade ending in 2018, and there’s no reason to believe that’s reversed since, according to neighborhood advocate Joanna Deming.

The plus side: The increases are a symptom of the North Side neighborhood’s desirability, said Deming, executive director of both the Fineview Citizens Council and the Perry Hilltop Citizens Council. The minus: “So we’re seeing those rents go up! …We want to make sure we protect our residents first.”

Deming spoke inside a freshly renovated, affordable rental house on Fineview’s Lanark Street, where the citizens council’s plans call for some 20 new or remodeled houses, all priced for modest incomes, and mostly for sale, rather than for rent. She is cobbling together funding packages including money from the state, the Urban Redevelopment Authority, Allegheny County and private sources. The groups she leads also plan to tap the city’s Housing Opportunity Fund [HOF]. 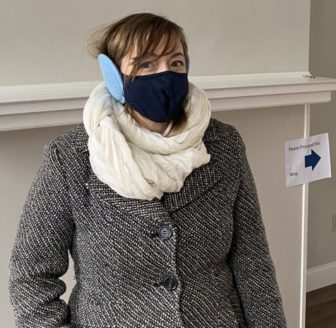 The HOF had, in its first two years, spent most of its money backing apartment development. That trend shifted over the past year, with nearly as much HOF money going toward development of for-sale homes as apartments.

There’s every indication that Mayor Bill Peduto will make affordable home ownership a central part of his reelection campaign.

Following a press conference in Fineview on Friday, Peduto told PublicSource that he’s working on creation of more tools to encourage home ownership, including potentially using Section 8 public housing funds to pay mortgages. On Wednesday, Peduto popped on to a Zoom press conference run by the Manchester Citizens Council, which touted nine new affordable for-sale houses. Peduto lauded “a reestablishment of home ownership, a focus on affordability in housing, a community-based plan” in that North Side neighborhood.

A Democratic primary rival, state Rep. Ed Gainey, D-Lincoln-Lemington, has listed affordable housing as one of his major priorities. In an interview Wednesday, Gainey didn’t throw stones at Peduto’s efforts, which the state lawmaker has seen up-close as a member of the mayor-appointed URA board.

Gainey, however, called his campaign “a great opportunity again to unite Pittsburgh around the issue of affordable housing and get everybody on one page,” leading to policy that’s “really focused on people,” rather than bricks and mortar.

As the campaign gets started, here’s an update on the city’s affordable housing efforts and potential next steps.

From rentals to ownership

The HOF gets $10 million a year from the city, plus a recent one-time infusion of nearly $2 million from Pittsburgh City Council. Funded mostly with part of the deed transfer tax, it is meant to be the city’s primary catalyst for construction, renovation and stabilization of housing.

The past year has seen a meaningful shift in its spending from apartment construction toward home ownership.

“I think that for-sale housing and home ownership programs are extremely important and critical, and I think the URA is really trying to get the word out on these programs and make home ownership as affordable as it can be,” said Jessica Smith Perry, the URA’s director of residential and consumer lending, in an interview this week.

The shift toward for-sale housing and aid for struggling households has been more a product of circumstances than intentional policymaking, according to Smith Perry. She listed three key drivers of the HOF’s recent spending patterns:

Why did financing of new apartment development slow down? “Larger developments did [experience] some delays with the COVID shutdown,” Smith Perry said. Among other things, the Pennsylvania Housing Finance Agency, which helps to fund many low-income housing efforts, delayed its tax credit approval processes last year.

The slowdown may be ending. The city’s affordable rental development numbers could get two boosts as early as today, when the URA board is expected to vote on a $750,000 loan for the Flats on Forward 43-apartment development in Squirrel Hill, and a $450,000 loan to aid construction of 42 new units in the Northside Properties Residences development in California-Kirkbride.

A broken system, and 'talk to action'

In Fineview, Peduto emphasized his plans to address the many vacant houses in some city neighborhoods. “They have houses that need a little bit of tender love. They have houses that, if you tried to build them today, you’d never be able to afford to. Houses that were built 100 years ago that have incredible stock to them, and value.”

He acknowledged, however, that the city’s process for moving abandoned houses into new, private ownership is “not successful,” blaming “a broken system” dictated in part by state laws that make it cumbersome to take property from tax-delinquent owners. He said he’d like to move responsibility for recycling vacant properties from the slow-developing Pittsburgh Land Bank to the URA, but that move would need Pittsburgh City Council’s approval.

Peduto said that improvements to the city’s sale of vacant properties could be a precursor for bigger moves, like borrowing a large amount of money backed by the HOF revenue and using it to jump-start investment. He added that his administration “spent the better part of the last two quarters of last year studying it.”

Gainey said the city needs to “move from talk to action…As with everything else, we conversate about it, but we’ve never turned the [housing] disparities into opportunity.” 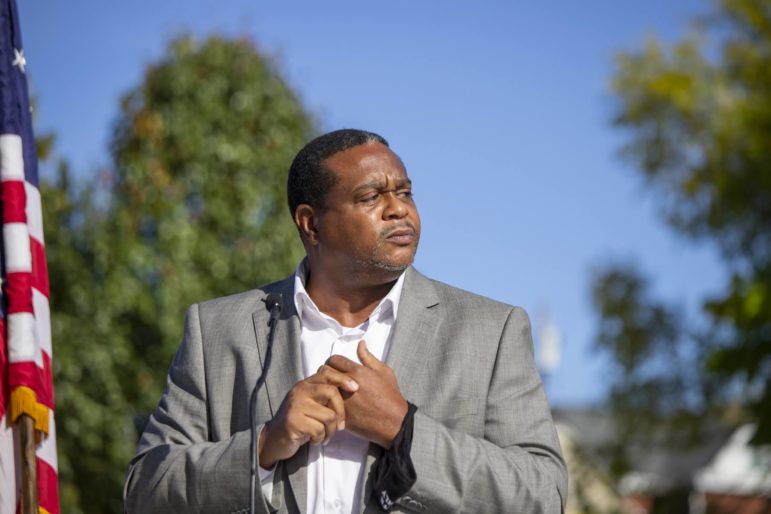 State Rep. Ed Gainey at the announcement of the "Avenues of Hope" initiative in October 2020. (Photo by Jay Manning/PublicSource)

Bridges to Washington, or to banks?

Peduto is also pulling from his figurative desk drawer a proposal called Bridges Beyond Blight, which he pitched to President Barack Obama in 2015. It would use federally funded Housing Choice Vouchers [HCV] – often referred to as Section 8 – which normally cover the bulk of a low-income family’s rent. Rather than continue to make payments to landlords, voucher-holding households would use the federal subsidy to buy refurbished or newly built houses from nonprofits, community groups or faith-based institutions, the mayor said.

Peduto said his administration is “lobbying the federal government” for approval of the approach.

“What we want is to have a flexibility, by working with a financial institution to accept [a voucher] as a mortgage [payment],” Peduto said.

That idea “has great potential,” according to David Weber, a policy analyst with the D.C.-based Public Housing Authorities Directors Association, who worked at the Housing Authority of the City of Pittsburgh [HACP], including as its chief operating officer, until 2018.

The federal government, though, might not be the main obstacle. 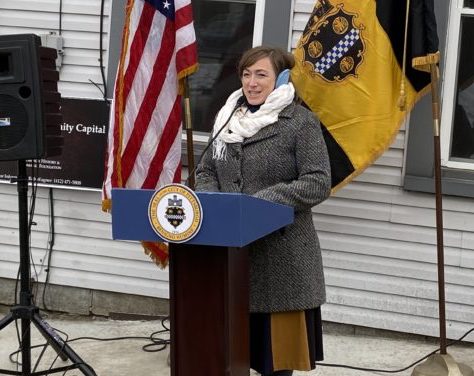 Joanna Deming, executive director of both the Fineview Citizens Council and the Perry Hilltop Citizens Council, speaks in front of a newly remodeled, affordable rental house on Lanark Street in Fineview at a press conference on Feb. 5, 2021. (Photo by Rich Lord/PublicSource)

“There is already some ability [under federal rules] for voucher holders to use voucher assistance for a mortgage,” Weber wrote in an email response to PublicSource’s questions. “Participation by, and acceptance of, the voucher by financial institutions in issuing mortgages has been an ongoing challenge.”

A voucher-backed home purchase program could come in handy in Fineview. There, the Fineview Citizens Council is working with the HACP to plan a potential transformation of the Allegheny Dwellings public housing complex, even as the council cobbles together funding for more than a dozen affordable for-sale houses on nearby Lanark.

A revamp of Allegheny Dwellings, said Deming, “will increase the [nearby] property values, I’m sure. Any time you redevelop something that was built in 1940, I think you’re going to see increased pressure on the market, so it makes the issue [of housing affordability] even more urgent.”