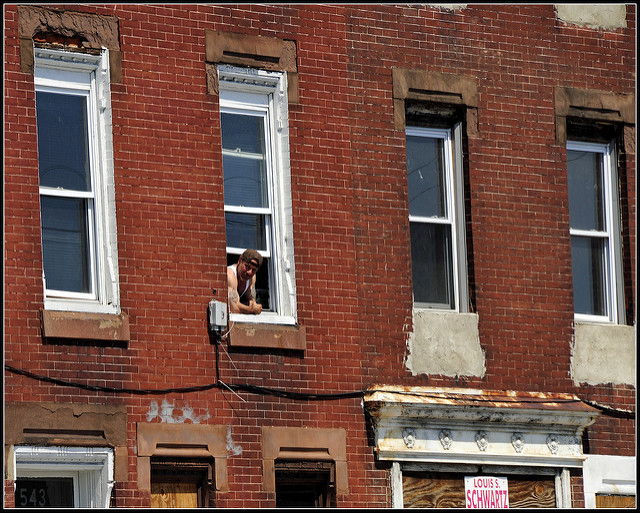 Disheveled brick building with someone hanging out the window.

Maura Kennedy’s battle against neighborhood blight saw some hard-fought victories in Philadelphia; now she says her strategy can work elsewhere.

Before Kennedy became Pittsburgh’s director of Permits, Licenses and Inspections, she worked on Philadelphia’s blight problem for six years, contributing to an increase in property values of $74 million.

She told representatives from Luzerne County government on Tuesday that her plan to tackle vacant and abandoned housing can be summed up in three steps: finding out who owns the property, enforcing updates to meet city code and dedicating legal resources to the mission.

Lombardo wanted to address a “critical issue” that any town faces, according to The Wilkes-Barre Times Leader.

Pittsburgh Mayor Bill Peduto brought Kennedy onto his staff in 2014, and his administration has since trained its focus on addressing vacant housing in many Pittsburgh neighborhoods.

"Once you start holding people accountable and forcing change, it’s really exciting to see the spread of dumpsters and people painting their porches and reinvesting in their community,” Kennedy said to WESA shortly after she was hired.

According to research from the University of Pittsburgh’s Center for Urban Studies, 7 percent of Pittsburgh’s 160,000 residential units had been vacant for six months or more in 2015.

The majority of vacant houses — 85 percent — were uninhabitable, and most of the blight was in neighborhoods including Homewood South, Allegheny Center and St. Clair.

While Kennedy is working to adjust her strategies from Philadelphia to Pittsburgh, blight caused by vacant housing and land parcels is not just an urban problem.

Pennsylvania’s homeowner vacancy rate — the percentage of for-sale houses without people living in them — rose from 1.6 percent to 2.2 percent from 2010 to 2015, according to data from the U.S. Census.

A vacant house is not necessarily a blighted property. But homes that remain vacant without necessary upkeep turn into problem lots that affect the rest of the community, according to the U.S. Department of Urban and Housing Development.

In 2011, while Kennedy was still in Philadelphia, the city passed a “doors and windows” ordinance to improve blighted neighborhoods aesthetically. The law required that owners of vacant housing install doors and windows, rather than board them up.

Kennedy also installed Act 90 in the city, including a “blight court” and measures that allowed the PLI to place fines on land owners’ personal properties, rather than just their abandoned homes.

“We really actually brought the problem to their door even if they weren't living in the city,” Kennedy said in a 2014 interview with Keystone Crossroads.

Peduto’s “Bridges Beyond Blight” program, which he pitched to President Barack Obama in 2015, would match vacant, uninhabitable housing with Section 8 residents in Pittsburgh.

His strategy would tackle both the city’s affordable housing problem and finding a use for its vacant properties.

“There are no guarantees,” Peduto said to the Pittsburgh Post-Gazette in January, but “this could be a program ... the whole nation could look to.”

Correction: A previous PublicSource headline incorrectly referred to Maura Kennedy as Pittsburgh’s planning director. She is the city’s director of Permits, Licenses and Inspections.