A for-sale sign hangs on the front porch of a home at 223 Robinson St. in West Oakland. (Photo by Ryan Loew/PublicSource)

A key goal of Pittsburgh’s Housing Opportunity Fund is to get more residents into affordable homes that they own.

But the program, so far, is lagging. Since 2018, when the HOF was first funded, the program has committed money to 12 for-sale homes compared to 316 affordable apartments.

Developers can apply for up to $70,000 to help with the purchase, renovation or construction of a given for-sale home, provided it is kept affordable for 99 years. But that’s not enough to produce quality homes, developers say. Instead, they must cobble together complex funding packages to finance even small numbers of homes.

“You almost have to have five different budgets for the project, one for each funding source,” said Brian Gaudio, CEO of Module Design, which is preparing to build its first HOF-backed house in Garfield. He’s thankful for the funding, but adds: “It’s a very complex process. It’s very time-consuming.”

After a Feb. 6 meeting of the HOF Advisory Board, Jessica Smith Perry, director of the Urban Redevelopment Authority’s Center for Housing Opportunities, said she anticipates “an uptick” in for-sale projects.

She said the program’s slow start “just has to do with the timing of where the community development corporations are with their projects at the time.”

Yet there is concern that the fund’s cap on backing for-sale housing could lead to fewer projects and, therefore, relegate lower-income residents to the rental sector — a pattern that could increase racial disparities between renters and homeowners in some neighborhoods.

The HOF is supposed to make it easier to develop and maintain affordable housing.

First funded through a 2018 hike in the deed transfer tax, the HOF has spawned six programs, including the For-Sale Development program and the Rental Gap Program, the latter of which lends as much as $60,000 per unit to nonprofit developers or developers with nonprofit partners for creation or preservation of affordable apartments.

The rental program has gone gangbusters, committing $6.5 million during its first two years, with 23 more projects including 633 more affordable apartments queued up.

The For-Sale Development Program, by contrast, has managed to commit just $715,000, according to the URA’s Feb. 6 presentation to the advisory board. A Jan. 16 presentation by Smith Perry to the URA board listed 13 more affordable, for-sale houses in the “pipeline.”

“The activity in this part of the Housing Opportunity Fund program has not been brisk,” said Rick Swartz, executive director of the Bloomfield-Garfield Corp. His organization worked with Module Design to tap the for-sale program for $70,000 to back a house going up on Garfield’s Black Street.

Swartz is worried that the slow performance of the program could contribute to a split in the housing market like he’s seeing in Garfield.

Over the last decade, that neighborhood went from around 10% white to 25% white, and lost around 1 in 6 of its Black residents, according to an analysis of U.S. Census Bureau data issued in January by the University of Pittsburgh’s University Center for Social and Urban Research [UCSUR].

That change has occurred at a time when Pittsburgh — long a city with a narrow homeowner majority — tilted toward tenancy, with 52% of households renting, according to UCSUR’s analysis.

“We’re now seeing that most homebuyers in Garfield in the last four to five years are white, and most people who are moving into the rental housing that we’re developing are African American,” Swartz said. “If African-American families then are consigned to being tenants, I think over time you’re going to have a real stratification of race in neighborhoods.”

The pattern, he said, hasn’t been lost on the neighborhood’s long-standing families. “People who live on streets in Garfield justifiably are wondering, is this the pattern for the future?”

In West Oakland, two- and three-bedroom houses in the 200 block of Robinson Street have sold in recent years for as much as $245,000.

Annemarie Malbon, manager of the Oakland Community Land Trust, said landlords with deep pockets can swoop in and buy properties that might be out of reach to prospective buyers looking for a house for themselves.

“It’s very hard for a wanna-be owner-occupant to purchase a house in Oakland, just on the market,” she said. 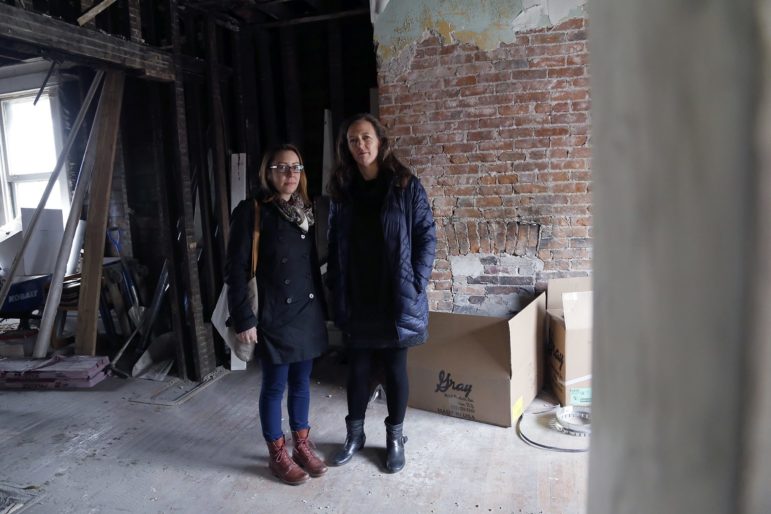 Annemarie Malbon (left) of the Oakland Community Land Trust and Elly Fisher of the Oakland Planning and Development Corporation stand inside a house that's being remodeled on Robinson Street in Oakland. (Photo by Ryan Loew/PublicSource)

Malbon and Elly Fisher, assistant director of Oakland Planning and Development Corp., recently visited a three-bedroom Robinson Street house that their organizations are offering for $145,000. That price meets common standards of affordability for a family of four making $64,000 a year, which is 80% of the area median income.

Their organizations spent around $260,000 buying and renovating the house, they said. But they can sell it for much less because the state’s Pennsylvania Housing Affordability and Rehabilitation Enhancement [PHARE] program kicked in $40,000, and the city’s Housing Opportunity Fund added $70,000. “We had to get two funders for one house,” Fisher said.

That’s easy compared to the deal Ed Nusser put together to fix up and sell a half-dozen houses in Lawrenceville. To raise $1.74 million, Lawrenceville Corporation tapped one bank loan, three long-standing URA programs, the state’s PHARE, two foundations, and the HOF.

“If it were easy, more people would be doing it,” said Nusser, who was with Lawrenceville Corporation, and now directs the City of Bridges Community Land Trust. “The work is around fundraising, bringing that funding in, getting the commitments.”

The For-Sale Development Program’s slow progress prompted the URA board to endorse cutting its allocation — which was $1.25 million in 2018 and again last year — to $500,000 for this year. City council has to approve that allocation before it is final.

At its March 5 meeting, the fund’s advisory board approved $210,000 for three for-sale row houses in Manchester. The houses will be among nine renovated on three streets in the neighborhood in a collaboration between the Manchester Citizens Corp. and October RealEstate Holdings. They had been slated for demolition.

“The community group and City Planning really, really expressed their concern for the demo and asked us to invest in these … to keep the historic nature of the neighborhood still there,” said Shaina Madden, a residential development manager at the URA.

The URA board has to approve the grant before it's final.

“There weren’t a lot of folks doing the for-sale development jobs” in recent decades, said Mark Masterson, executive director of the Northside Community Development Fund, and a member of the Housing Opportunity Fund Advisory Board. “You can’t stop something for 20 to 25 years and then expect it to turn around and take off.”

“On the for-sale side, there aren’t as many funding sources for those projects, and the gaps are really big,” she said, referring to the gaps between the cost of building or renovating a for-sale house and the mortgage capacity of a below-average-income family.

Smith Perry said the program’s $70,000 cap is based on the URA’s past experience with housing development, tempered by “the desire to try to get as many units through the program” as the fund can afford. 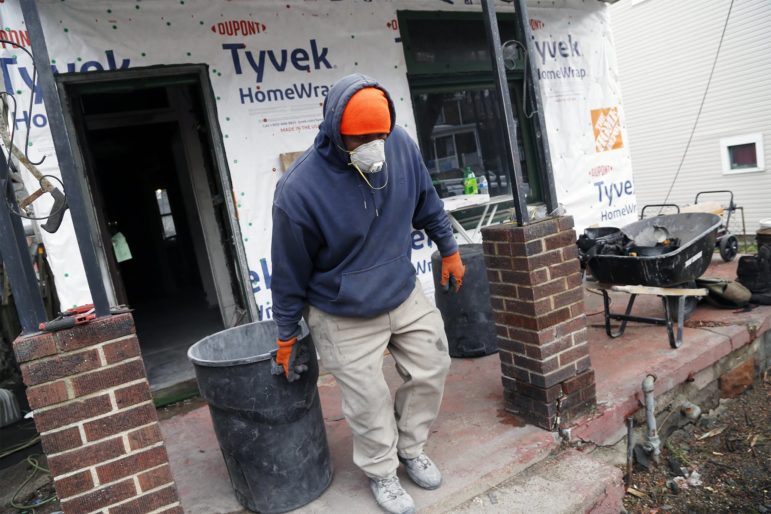 Construction technician Don Bivins hauls debris out of a house that's being remodeled on Robinson Street in Oakland. (Photo by Ryan Loew/PublicSource)

Swartz, however, said that sometimes “the $70,000 subsidy itself doesn’t do the trick.”

Fisher called the for-sale program “a great resource for renovating homes to make them affordable to new buyers, but it takes over $100,000 in gap funds to prepare these properties.

“Increasing the cap to $100,000 or even higher will make it easier for CDCs to provide quality affordable housing in our neighborhoods.”

Smith Perry said the URA could reexamine the funding cap if it’s a concern.

“There obviously would be a tradeoff between the number of units that could be done. But if that’s something that we would need to re-look at, we could,” she said.

Update (3/5/2020): This story has been updated to reflect the Housing
Opportunity Fund Advisory Board's approval of new project funding on March 5.

This story was fact-checked by Oliver Morrison