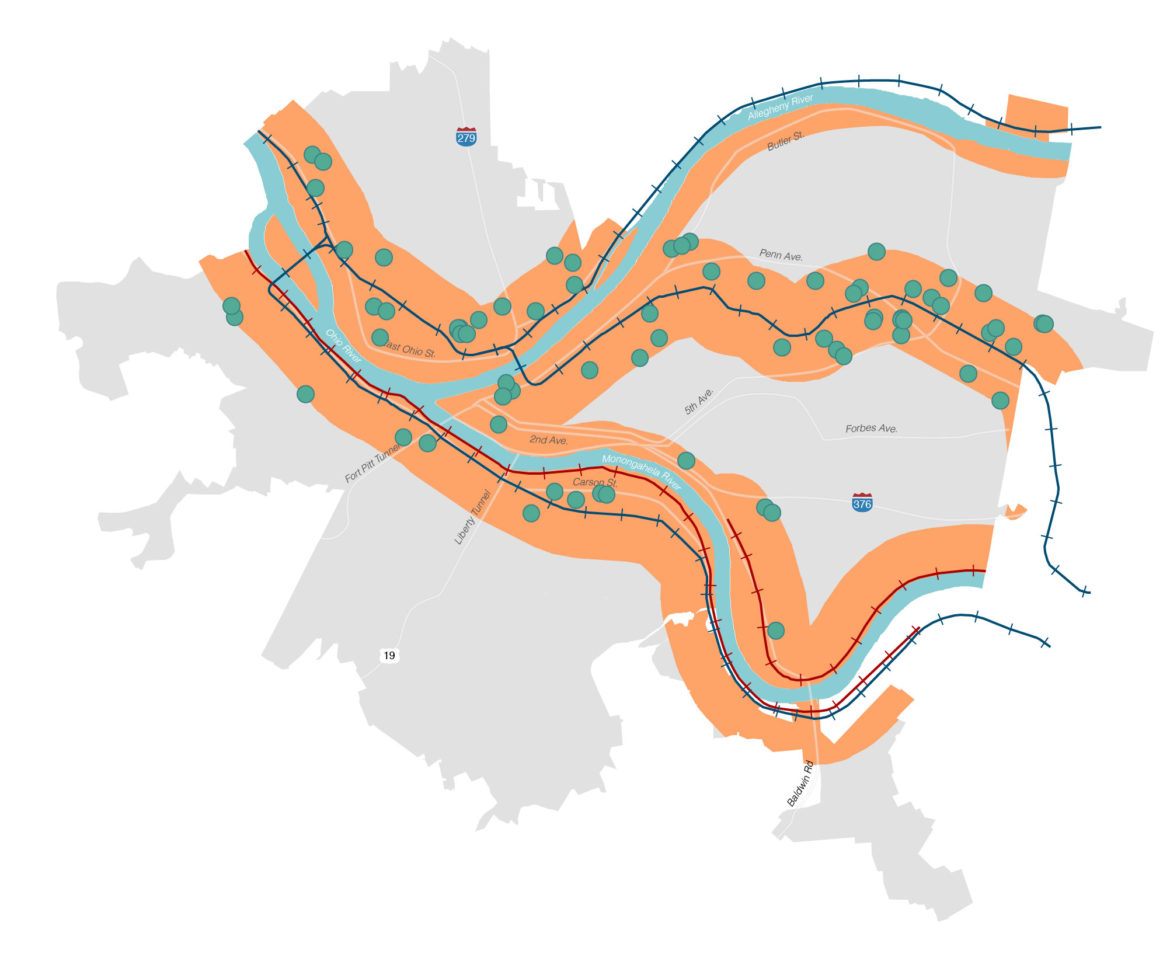 More than 40 percent of Pittsburgh’s residents are at risk if a train carrying crude oil through the city derails and catches fire, according to a PublicSource analysis.

That number does not include children at 72 K-12 schools inside that area.

PublicSource created a map using a perimeter of a half-mile on each side of the rail lines known to carry crude oil in the city. A half-mile is the federal evacuation zone recommended for accidents involving crude oil trains.

Pittsburgh’s Office of Emergency Management Services and Homeland Security began doing a risk assessment of the trains after the federal government ordered railroads in May to turn over information about which rail lines carry a million gallons or more of crude oil from North Dakota’s Bakken Shale at a time.

“Nobody really knows that there is an explosive bomb driving through their neighborhood,” said Bill Bartlett of Action United, a Pittsburgh group that advocates on behalf of low- and moderate-income families.

Bartlett said because of Pittsburgh’s dense urban population, he’s concerned that many of these trains are passing through poorer areas, without anyone knowing what they’re carrying.

Dubbed “virtual pipelines,” these trains can carry millions of gallons of crude oil in more than 100 tank cars and can be a mile long. Many of them are on their way to Philadelphia refineries carrying increasingly large shipments of Bakken crude from North Dakota.

It’s difficult to know exactly how many trains come through Pittsburgh carrying crude oil because the two major railroads, Norfolk Southern and CSX, don’t identify their routes to the public for security and business reasons.

Crude-by-rail traffic has increased by more than 4,000 percent over the past five years. There have been at least 12 significant derailments involving crude oil in North America since May 2013. Lawmakers and public safety groups are concerned that residents near railroad tracks are exposed to more danger. And officials have said safety regulations aren’t keeping up.

You may have heard of the devastating accident in Lac-Mégantic, Quebec, last year, when 47 people died after a train carrying Bakken crude exploded.

And, since January, Pennsylvania has had three derailments involving crude. There were no injuries in any of the accidents.

While hazardous materials have traveled on railroads for years, trains have never carried this much crude oil, much of it Bakken crude, which is more flammable than other types of crude.

Raymond DeMichiei, deputy director of Pittsburgh’s office of emergency management and homeland security, said his office decided to do the emergency assessment after receiving information from the state that trains carrying more than a million gallons of crude were going through the city.

DeMichiei said his office didn’t have that information previously.

“We’ll determine if we have enough training, equipment,” DeMichiei said. “If we don’t have enough, we’ll get more.”

At least six states — Washington, North Dakota, California, Montana, Florida and Virginia — have made information publicly available about the amount of Bakken crude and the routes it is traveling.

DeMichiei wouldn’t comment on how many crude trains come through the city daily, but said he generally sees a train along Route 28 on his way to work in the morning and then another one when he drives home.

“We are aware of the issues and we are working to make everyone as safe as possible,” he said.

DeMichiei said Pittsburgh doesn’t have a response plan specifically for Bakken crude and the railroads haven’t provided one. If an accident did occur, he said the city would base its response on U.S. Department of Transportation guidelines for accidents involving flammable liquids and establish a danger zone of a half-mile on either side of the track. That danger zone could expand depending on the scope of the accident, he said.

Emergency response officials in major cities and small towns have testified before Congress that responders wouldn’t be prepared to handle a large-scale crude oil disaster like the deadly one in Quebec.

Sixty-five percent of fire departments responsible for hazardous materials response haven’t trained all of their personnel for crude, a member of the International Association of Firefighters told Congress last month. New York fire officials asked Congress to direct $100 million in emergency funds for a national training program for firefighters to address risks from these trains. The money would be used to train firefighters and to put in place stashes of firefighting foam and equipment, according to McClatchy Newspapers.

Alvin Henderson, chief of Allegheny County Emergency Services, said the rail industry has been very cooperative and first responders in the county are receiving training specific to crude oil.

Henderson said he’s not “losing any sleep” over crude oil moving through Pittsburgh.

A spokesman for Norfolk Southern said they’ll offer training in Pitcairn, Pa., this month to first responders so they can get more hands-on experience with rail tank cars, equipment and information about crude oil shipments.

Under a recent voluntary agreement with the DOT, the rail industry committed $5 million for training first responders.

In a recent meeting with PublicSource, Pittsburgh Mayor Bill Peduto’s only comment about the issue was that, in case of an accident, the city could call on the PA Region 13 Task Force. The task force is an initiative that allows counties to pull resources from the region in an emergency.

In St. Louis, a city similar in population size to Pittsburgh, the fire chief and a group of residents said the Union Pacific Railroad has agreed to reroute crude oil trains around their neighborhood, and possibly the entire city.

“We stayed focused on the one issue: Get these trains away from people, get them away from the heart of the city,” said Tim Christian, a member of St. Louis for Safe Trains.

“We made just the right amount of noise through the right channels,” Christian said. “It was community in action and it worked well.”

St. Louis Fire Chief Dennis Jenkerson said he has a “gentlemen’s agreement” with the main railroad operator to reroute the trains around Holly Hills. There is no formal agreement, he said.

“I think they rerouted because of a concerned [citizens] group,” Jenkerson said.

Christian said he’s received more than a dozen phone calls from people across the U.S. asking how they can organize to reroute crude trains.