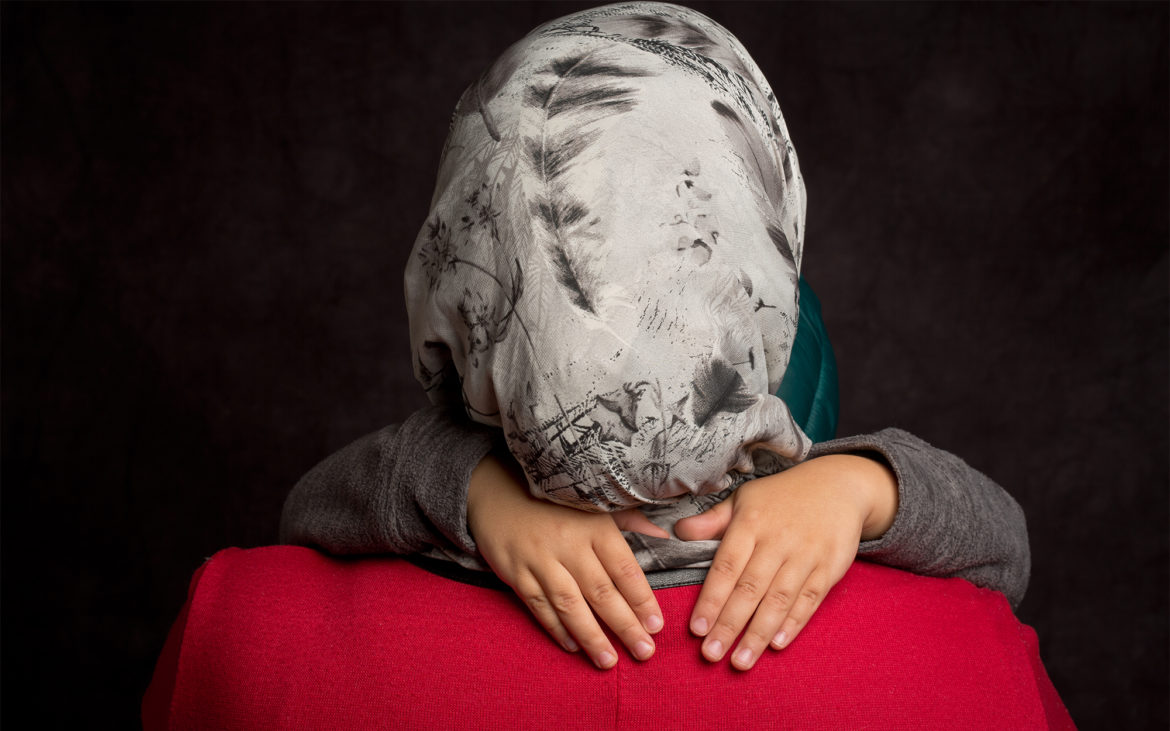 Aya, who chose to go by a pseudonym for privacy reasons, is from Morocco and moved to Pittsburgh in 2009. She has two children, an 8-year-old girl and a 4-year-old boy. (Photo by Heather Mull/PublicSource)

For 10 weeks, Literacy Pittsburgh allowed PublicSource freelance reporter Brittany Hailer to visit their parent literacy class for immigrants and refugees to lead discussions on journalism and storytelling. For the first half of the semester, students read and discussed first-person stories told by other foreign-born residents of the Pittsburgh area. Students also learned about the history of free press in the United States, how to detect fake news and how social media platforms like Facebook affect their news consumption. But, one of the goals of the class was also to help them tell their own stories.

The women did not feel equipped yet to write their stories themselves and felt most comfortable talking about their experiences in a roundtable discussion. There were four storytelling sessions. Throughout the sessions, the women talked about a variety of topics — from the meaning of their names (rain, gold and the namesake of a Muslim prophet among them) to hopes and dreams they have for themselves and their children. This is a glimpse into the conversations that centered on motherhood and living in America where one’s culture can be misunderstood or easily fade away.

“Do you worry about preserving your culture?” The question lit up the room with stories of shared concern, experience and, naturally, advice.

Moe Moe Tin, a 32-year-old from Burma, more commonly known as Myanmar, was quick to respond. She moved to the United States in 2014. She has two daughters, ages 8 and 2.

“We teach them all the time, but they are very close with American culture. I say, ‘You have to speak my language. Even if you don’t speak, you have to understand everything.’ I teach them Burmese and Karen. The big one, she knows a lot.

“When we go to visit home [in Burma], I bring chocolate. Every morning, all the kids come. My daughter, I say, ‘See, everyone can speak your language. What are you gonna do?’ She have no choice. Every kid speaks Burmese. She’s doing well.” 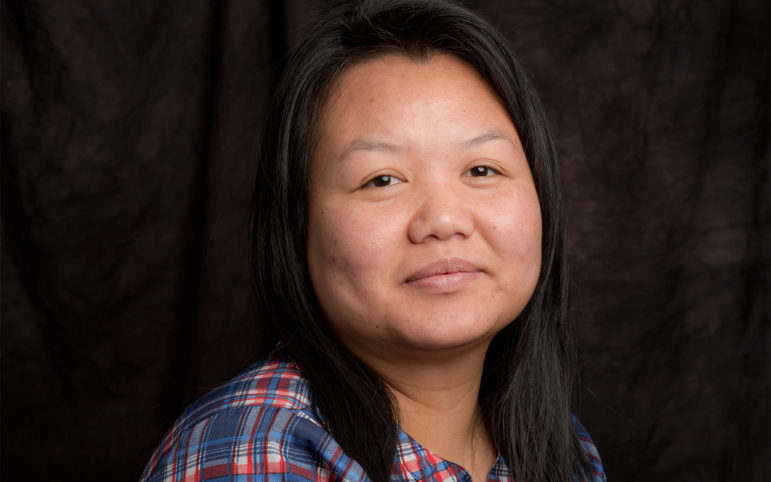 Moe Moe Tin is a 32-year-old from Burma, more commonly known as Myanmar. She moved to the United States in 2014. She has two daughters, ages 8 and 2. (Photo by Heather Mull/PublicSource)

Moe Moe last visited her family in Southeast Asia in 2016. Her daughter loved the country and particularly the chickens and farm animals in the village. Moe Moe recalled her asking, “Mom, can I take these to America?”

Moe Moe said she’d like to move back home because she misses her family and village, but the conditions there are too poor to raise a family. She wants her children to have access to a good education and opportunity. The United States can provide that for them, she said. When she thinks back to her childhood in Southeast Asia, it’s not what she wants for her kids: “Like music, we never played. Even pencil, we had one. So we had to be careful in keeping. Now they have a pencil, a pen, an iPad. They have a choice. For us, we didn’t have anything.”

Moe Moe said she would visit home more, but it costs more than $1,000 per person to fly home. Though Moe Moe and another student Ja Doi Sana are from the same country, they don’t speak the same language. Having no one to speak to in their native language contributes to their feelings of homesickness. Ja Doi said she believes there are only three families in Pittsburgh who speak her language. 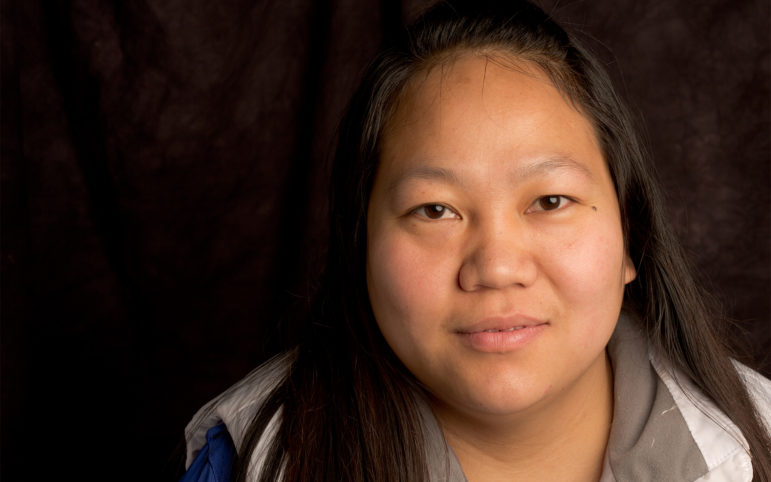 Ja Doi Sana, 32, moved to Pittsburgh from Burma in 2013 and has two young daughters. (Photo by Heather Mull/PublicSource)

Aya, another student from the class who chose to go by a pseudonym for privacy reasons, is from Morocco and moved to Pittsburgh in 2009. She has two children, an 8-year-old girl and a 4-year-old boy. She speaks Arabic and observes the Muslim faith.

“My kids, I talk with them just in Arabic at home. They know Arabic and they know English. When we go back home, they have to understand and talk with their family. My mom, she can’t speak English. They talk every day on the phone. My daughter loves to be there. They’ve gone four times. She see the family, my brothers and sisters. She told me, ‘We are alone here.’”

Still, Aya pointed out that her children don’t default to Arabic. “My kids, when they play, they talk English.”

This prompted Fatmah to speak up about how school has impacted her 5-year-old daughter’s ability to speak, particularly because of living in different countries during this formative time. 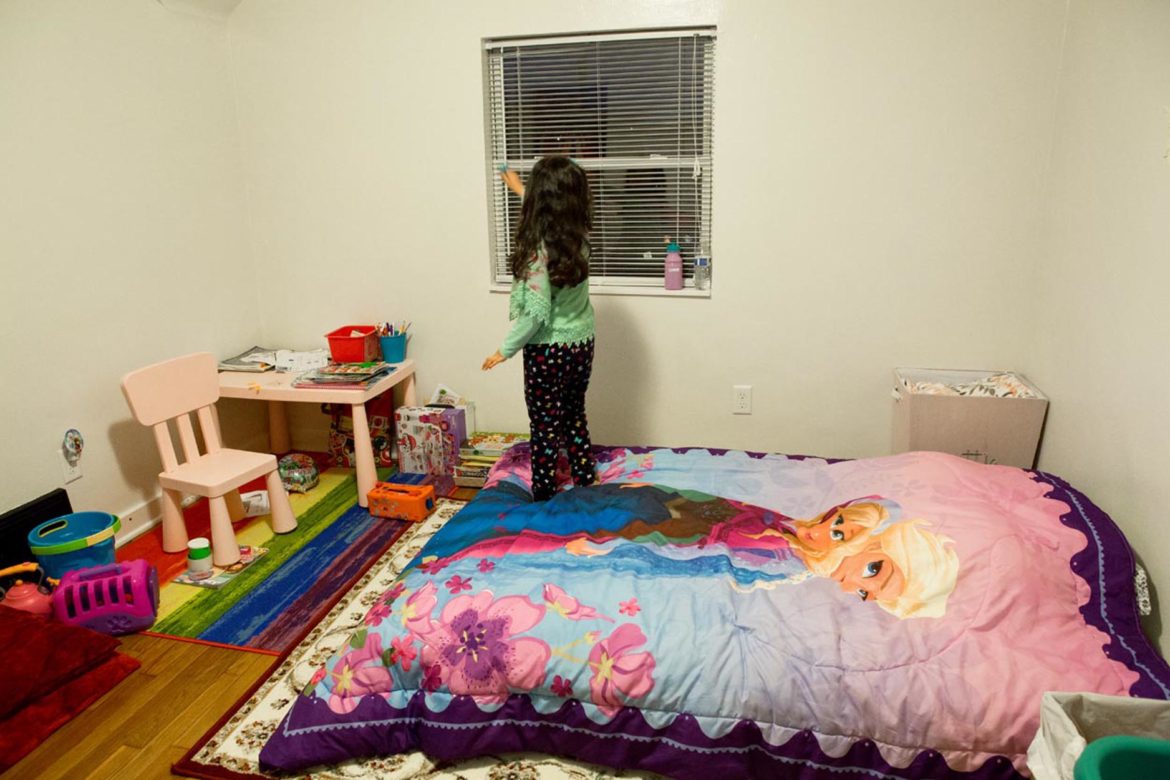 Fatmah's daughter has already learned Turkish, Urdu and English at the young age of 5. (Photo by Heather Mull/PublicSource)

Fatmah, 26, and her husband moved from Turkey to Pakistan when their daughter was 3. Fatmah, whose name has been changed to hide her identity for fear of reprisal, said she and her husband faced persecution after a coup in Turkey because they worked as teachers. They were not immune from the coup’s effects in Pakistan; Turkey pressured the Pakistan government to deport teachers. Fatmah’s family fled, and it is too dangerous for them to return. They moved to the United States in November 2016 after obtaining visas.

With the two major moves, their daughter has been exposed to multiple languages — Turkish, Urdu and English.

“But we came here, she, for a long time, didn’t go to school. Six months. She forgot Urdu and English. She now is in kindergarten. She now talks. She understands. She has little problem. Sometimes, asking, she doesn’t know. ”

Aya jumped in to reassure Fatmah. “But she’s gonna be good! My daughter, when she went to preschool, 5 years [old], she didn’t know any English. Even she was born here. She knows just Arabic. Next three or four months, she started speaking English.” 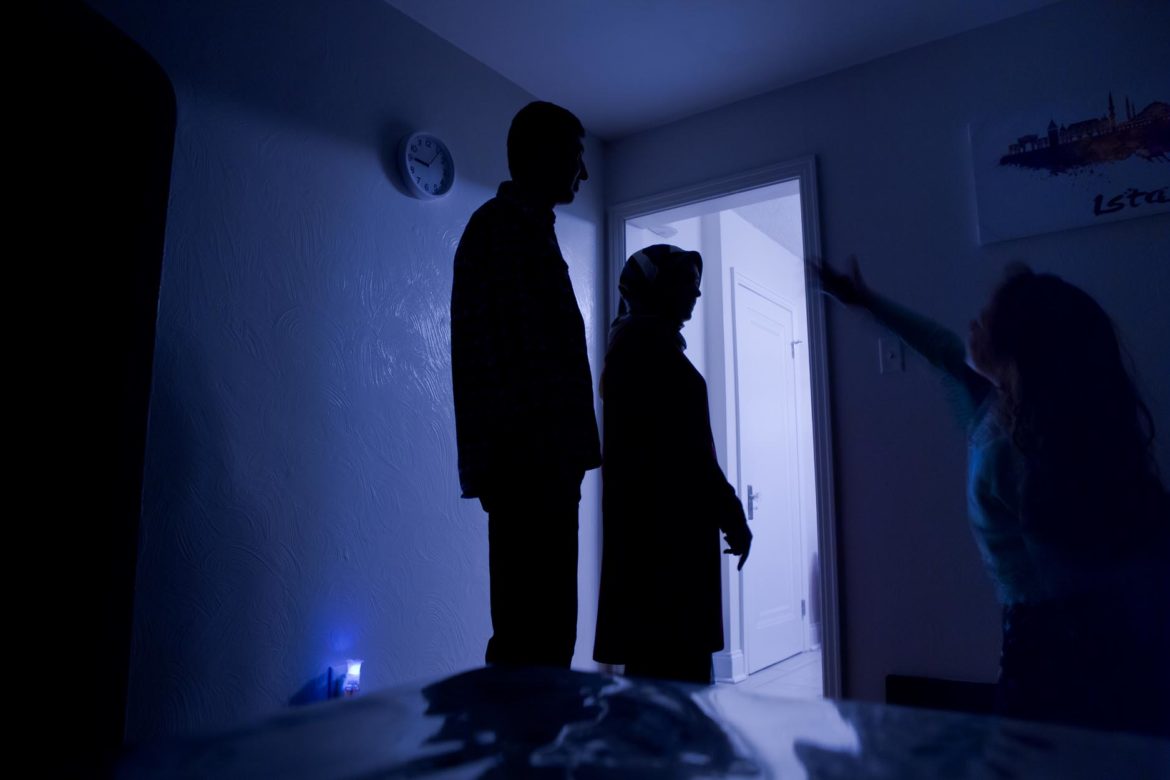 Fatmah (center) in her home with her husband (left) and their daughter. They have been kept anonymous for fear of reprisal because they fled persecution in Turkey. (Photo by Heather Mull/PublicSource)

The women think often about their futures in America — their own, their children’s and what their families may be able to achieve here.

Aya dreamt of success in school and employment for her children. “Our dreams, actually, it's our kids. They finish school and get good jobs,” she said.

Fatmah included herself in the same hopeful forecast for professional success. “I want to finish college because I am a teacher. I want a different subject. If my English is perfect, I may try nurse or medical. Anything I am thinking! Not only my kid’s.”

Aya agreed. She said she actually would like to become a nurse, too.

Ja Doi, 32, moved to Pittsburgh from Burma in 2013 and has two young daughters. She shared two clear, tangible goals that she has in common with many Americans.

“My dream is to buy a house. It’s my dream,” she said. “And I want to graduate G.E.D class...I think everybody has a dream.”

This essay is a special feature focusing on the experience of immigrants and refugees in the Pittsburgh area. This project has been made possible with the generous support of The Heinz Endowments.

One thought on “Is it possible to preserve your culture as an immigrant in Pittsburgh? These mothers say it’s a challenge.”