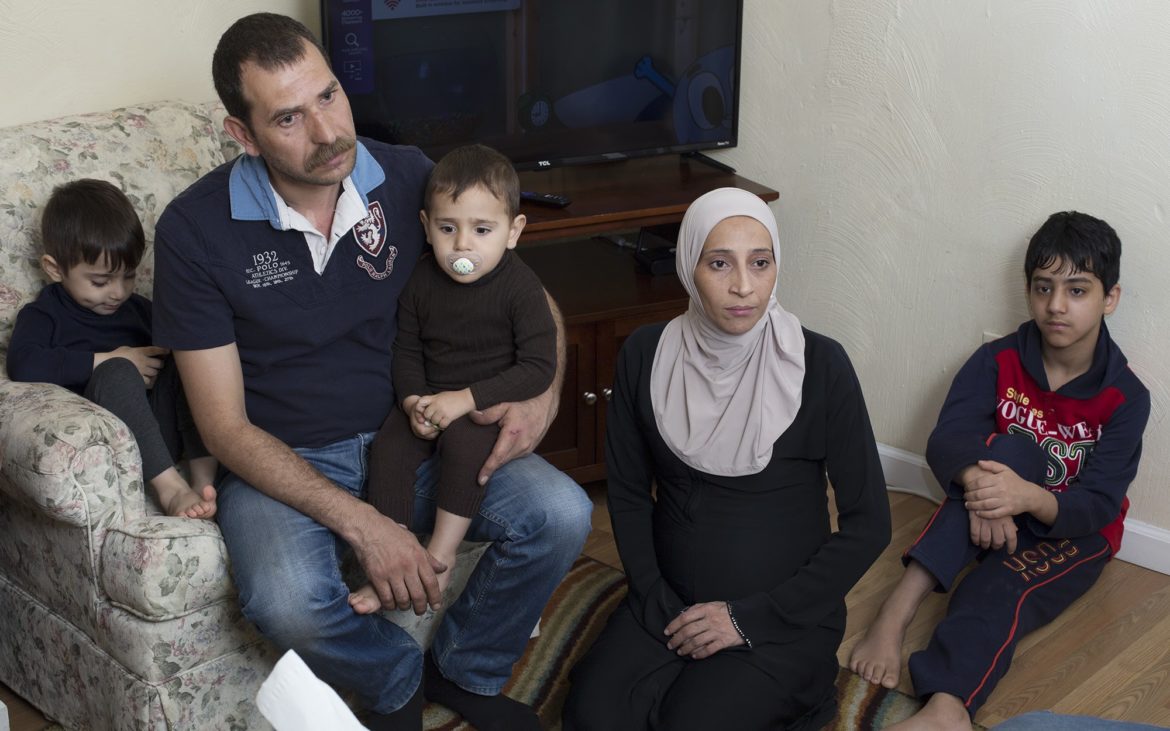 Saba and Mohamed Jiham with three of their boys (left to right) — Yousef, 4, Zakaria, 2, and Anwar, 11 — at their home in Pittsburgh's South Side Slopes. The couple have two other boys, Feras, 5, and a newborn, Yahya. The kids mostly stay indoors because there is no backyard or other kids in the neighborhood. (Photo by Solo Ouedraogo/PublicSource)

It’s 8 p.m. Zakaria gasps for breath in a cramped two-bedroom townhome on a narrow alley of Pittsburgh's South Side Slopes. He is 2 years old.

The worn carpet and moisture seeping through walls make his asthma worse. His mother, Saba Mohamed, calls a few friends, asking for help with transportation to the hospital, but can wait no more. Her husband is still at work. She has been feeling sick herself during these last few days of pregnancy. Anxious and exasperated, the mother, the sick child in stroller, and her three other children walk to catch a bus to UPMC Children’s Hospital about 5 miles from their house.

It takes them 10 minutes to walk to the bus stop and sometimes twice that when they’re all together. They must walk fast. She wants to get on the right bus so they can be at the hospital in 35 minutes. If they miss this bus, it will take more than an hour and two bus transfers to get her sick child to the hospital.

Making it to the hospital is not the only challenge. Once there, she needs support in finding the right section of the hospital and the doctor. She tries to communicate with people in English, a language she has recently started learning but she can muster only a few random words. She is tired but grateful when she sees her son start to recover from the bout of asthma.

The family's challenges are typical of any American family who lacks transportation, quality housing and financial stability, but their problems are aggravated by language and cultural barriers faced daily by many Syrian refugees who now call Pittsburgh home. They have been fortunate to escape the horrors of war but never expected to land in a mire of financial hardship in the United States. Mohamed Jiham with his 2-year-old son, Zakaria. Zakaria’s asthma has been hard to manage in Pittsburgh’s climate and further aggravated by the dilapidated condition of their townhome. (Photo by Solo Ouedraogo/PublicSource)

Since 2015 until June 2017, 227 Syrian refugees have been resettled in Allegheny County.

Refugee resettlement agencies are in place to ease the transition for them. The groups provide resources in the realms of employment, language competency and adapting to cultural differences. However, the maximum support from host agencies lasts six months to one year — for many refugees, that is not enough time to relearn everything from taking a bus to navigating the U.S. healthcare system.

As local stakeholders and volunteer advocacy groups attempt to identify and mend the gaps, refugee families in our neighborhoods continue to struggle.

Saba and her husband, Mohamed Jiham, are happy to be in Pittsburgh but wish for a “better city.”

A better city for them would mean affordable housing in a family-friendly neighborhood with access to good schools and public transit.

The Jihams think back to why they left Syria. Originally from Golan Heights, they were evacuated from the area and resettled in Damascus, the capital of Syria.

As the Syrian war climaxed in 2013, the family lost its home once again. Their neighborhood was destroyed. The army captured Jiham to question him about possible connections with rebel groups. He was released after a month of imprisonment and made the decision to leave Syria as soon as he was set free. The family fled to Jordan. They finally arrived in Pittsburgh in November 2016.

Once in Pittsburgh, limited transportation has curtailed the family’s ability to make friends and mingle with the Muslim community. Mosques and community centers are not easily accessible. No other family in their neighborhood speaks Arabic. They feel isolated and abandoned. Saba Mohamed recounts her hardship in Pittsburgh. She was expecting her fifth child at the time of this interview. (Photo by Solo Ouedraogo/PublicSource)

All refugees are strongly encouraged by the Refugee Admissions Program of the U.S. Department of State to take at least six months to one year of English classes. In Pittsburgh, these classes are mostly organized by the Greater Pittsburgh Literacy Council.

But Mohamed Jiham says the pressure to provide for his wife and now five young children forced him to quit English language instruction and focus on work. He is unable to practice his trade as an auto mechanic because he is not certified in the United States and cannot communicate in English. So he works at a laundry facility in Downtown Pittsburgh.

With her husband at work and no network here, Saba has nowhere to leave her children to attend English classes. The cycle continues.

In Pitcairn, Zaitoon Aboud cooes in her mother’s lap. The 8-month-old blissfully swallows Gerber baby food, changes hands between her mother, father and volunteer social workers before settling down for a midday nap.

Her parents, Hisham and Summer Aboud, (whose names have been changed in this article for privacy reasons) became refugees after fleeing from their hometown of Aleppo, Syria, in 2013. After spending a year in Egypt and another two and a half in Turkey, they arrived in Pittsburgh in March 2016. Hisham and Summer Aboud, with their daughter Zaitoon, at their apartment in Pitcairn. Their names have been changed in this article for privacy reasons. (Photo by Ryan Loew/PublicSource)

Traveling across the Middle East in boats, the couple carried two little girls, bags of clothing and the burden of the unknown. The girls have many questions – about things they have seen and sounds they have heard. Those explosions they cannot explain. All they know is that they don’t want war. The Abouds want peace, security and schools for their children, all of which had become impossible to achieve in Syria.

Every accomplishment, from Hisham’s work doing laundry at a hotel in Penn Hills to getting a car and seeing their girls go to school make the Abouds happy and hopeful. They believe, “There is freedom here like nowhere else.”

The Abouds were juggled between two refugee resettlement agencies in their first six months, neither of which made significant strides in helping the couple overcome linguistic barriers or figure out reliable access to transportation.

However, what the resettlement agencies could not do for them, the Ansars of Pittsburgh have. Locating their apartment’s mailbox, opening a bank account and guiding Hisham on obtaining a driver’s license are only a sampling of the tasks Wiam Younes and her team helped teach the Abouds. Wiam Younes is the founder and CEO of Ansars, a group that helps refugee and immigrant families adjust to life in the United States. (Photo by Ryan Loew/PublicSource)

Many newly arriving Syrian families in Pittsburgh are adjusting to their new communities with help from Ansars. Since January 2017, this group of enterprising Muslim women has helped to fill the resource gap for 62 Syrian families. They have addressed varying needs of refugees, from serving as an interpreter and providing in-home language instruction for homebound families like the Jihams to researching transportation options or helping a family to relocate.

Ansars means “helpers” in Arabic and is based on the Islamic term for the local inhabitants of Medina who took the Islamic Prophet Muhammad and his followers into their homes when they emigrated from Mecca.

Wiam Younes is the founder and CEO of Ansars. Once a refugee from Palestine, she is deeply connected to the Syrian community. Today, she teaches information security and compliance at the University of Pennsylvania. “All of us are volunteers,” she said. “We don’t get any funding from the state, local government, nonprofit. We don’t get any funding from anybody other than good heart of people who want to donate.”

Barbara Murock serves as manager of the Allegheny County Department of Human Services’ Immigrants and Internationals Initiative. Murock said the local government is doing its best to address needs of refugees.

“There is a housing shortage for everyone. It’s a get-in-line thing.” Add to that the difficulty of finding landlords comfortable with no credit history or job yet. “That really narrows what’s available. The refugee resettlement agencies are hustling all the time looking for housing.” Once refugees arrive, resettlement agencies provide some basic necessities, including one mattress per individual to sleep on. (Photo by Solo Ouedraogo/PublicSource)

The county-led initiative draws upon an advisory council composed of leaders from community groups that provide refugee and immigrant services, literacy and family programming organizations. Their efforts are bolstered by a $1 million grant awarded to Jewish Family and Children’s Services.

Murock spearheaded the initiative 10 years ago based off of Allegheny County leadership’s desire to provide “culturally competent human services” to all of its residents. Murock says she and her team focuses on developing “natural supports” in the community, leaders in various refugees groups who are already part of those communities.

A shift in the federal mindset of accepting refugees, particularly from Muslim countries, has changed projections for local agencies. For example, Jewish Family and Children’s Services had planned to receive 210 to 230 refugees between October 2016 to Sept. 30,, 2017; now they are expecting no more than 140 to 145 refugees in that time. The Northern Area Multi Service Center was prepared to resettle 250 refugees, but now does not expect more than 200.

Murock is undeterred by circumstances. She said we cannot judge the intake of refugees “on what is good or bad for us. It’s based on the needs of the world.” She said the political controversy about accepting Syrian refugees has both hurt the region’s reputation as well as shown its best side; local refugee resettlement agencies say they’ve received an overwhelming response from volunteers who want to help out new Syrian families in the city.

Murock thinks most Pittsburghers want their new neighbors to feel “secure and welcome.”

This kindred spirit is the source of hope for many refugees from Syria. As Mohamed Jiham puts it: “There are Pittsburghers doing great things. People here are very kind. If the Americans think they need to fear Muslims, that’s not true because they are here to build a family.”

Saima Sitwat is a writer and outreach specialist based in Pittsburgh and is president of the Muslim Association of Greater Pittsburgh (MAP). She can be reached at saimaadil@hotmail.com.