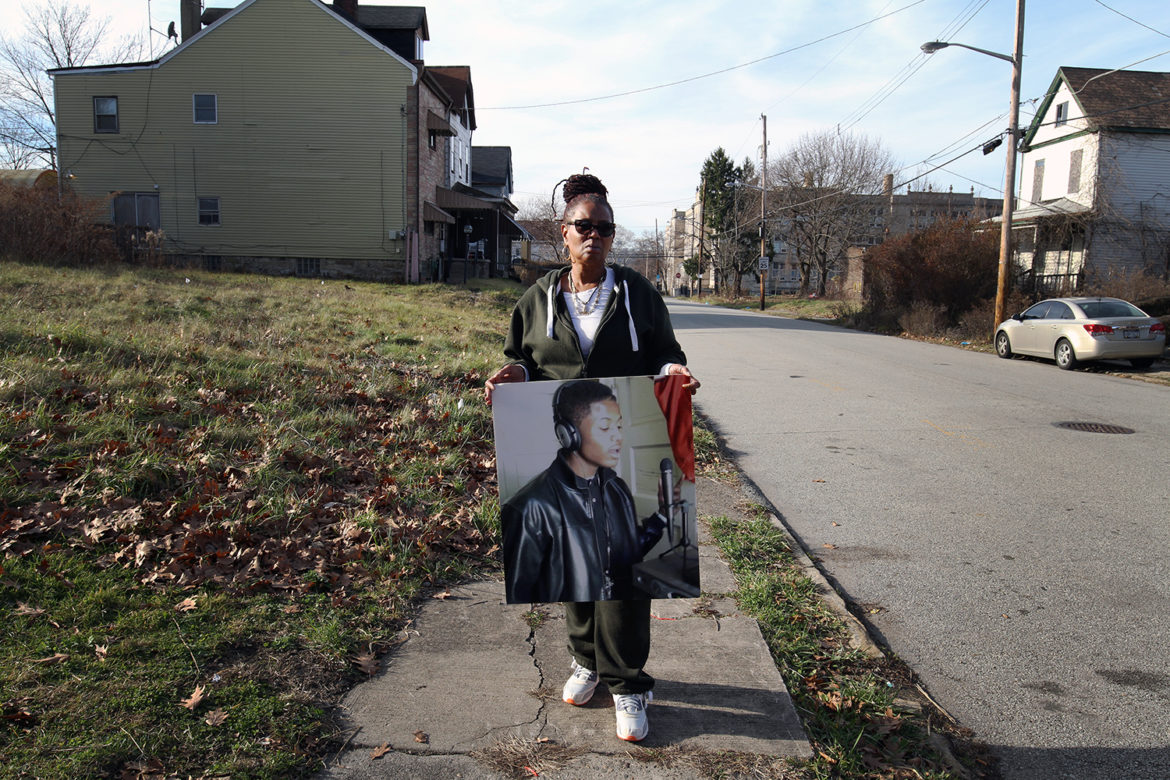 The street where Carol Speaks grew up is only blocks from where her grandson Antwann died.

At 19 years old, he was shot 17 times, according to Carol, in front of witnesses just down the street from Homewood’s Westinghouse Academy.

It used to be a nice place, she says, walking past boarded-up windows, pointing out where neighbors used to live and looking for bullet holes.

These are from September, she said, and were made during the second anniversary of her grandson’s death. Shooters advanced down the block, firing at a vigil where bystanders, including her 12-year-old niece and a 3-year-old boy, were struck by gunfire.

From here, it’s a short walk to Hamilton Avenue where Carol’s son Charles “Squeak” Speaks, then 37, was murdered in 2010. There are dozens of other murder scenes in Homewood, and with every shooting she hears about, she recalls the helplessness she felt waiting for the coroner to come for her son.

The violence is walking distance to some of Pittsburgh’s most affluent neighborhoods, like Point Breeze and Shady Side, and to luxury apartments going up at Bakery Square.

“You want to say what part of that is for me?” Carol asked of the redevelopment, keenly aware of the racial divides in the city and how that quickly changing community seems indifferent to the tragedies in her part of town.

Pittsburgh is often called a “most livable city.”

The Economist magazine gave that accolade to the city in 2005 and several times afterward. A seemingly endless list of publications have lauded Pittsburgh for its economic revitalization, affordability and quality of life.

Drive through Homewood, Larimer or Lincoln-Lemington-Belmar. See if it looks different from Shady Side, Point Breeze or Squirrel Hill. Look for the trendy restaurants, small businesses and boutiques.

Drive through the Hill District, nestled in the shadows of towers branded UPMC, BNY Mellon and PNC Plaza — symbols of Pittsburgh’s economic powers, and the downtown that was cut off from the Hill decades ago by a sports arena that’s not even there.

One is doing exceptionally well, he said.

The other is “getting the crumbs off the table.”

Pittsburgh Mayor Bill Peduto has talked about subsidizing homeownership in areas like East Liberty, where more than 7,000 are on a waiting list for Section 8 housing.

Peduto did not respond to a request for comment for this story.

A recent report by the Urban Institute in Washington, D.C., called the economic disparity between black and white in Pittsburgh “staggering.”

Listen to the 90.5 WESA story by Megan Harris:

Unemployment for black residents with at least a high school diploma was more than twice that of white residents from 2007 to 2011, the report said. Because of historic and ongoing barriers to equal work opportunities, black men are far more likely to have earnings at or below the poverty level.

Margaret Simms, an Urban Institute fellow and co-author of the report, said Pittsburgh, which is roughly a quarter black, has one of the most segregated metropolitan areas in the country.

“There are few bridges from one community to another,” Simms said, noting the irony of Pittsburgh’s nickname, the City of Bridges.

Divisions, she said, could worsen with redevelopment because job candidates are expected to have specialized skills and education, the same barriers already facing black men.

The report, commissioned by The Heinz Endowments, also a funder of PublicSource, examined economic barriers facing black men, not issues like violence.

Allegheny County, however, looked specifically at violence in 2014.

Most area residents feel safe in their communities, according to the report on street violence prepared by the county’s Department of Human Services.

But there are pockets of violence, in Pittsburgh and outside, where chronic shootings make “families fearful about allowing their children to play outside and older adults afraid to walk to the bus stop.”

In other words, there’s a disconnect.

Residents of some neighborhoods feel safe. And in other sections of the city, they are afraid to leave their homes.

In Pittsburgh, only certain neighborhoods bleed.

PublicSource mapped every homicide in the city from 2010 through 2015. The results show a startling geographic division — and clear racial disparity — in who suffers the brunt of the violence.

There were no killings in Shady Side. None in Point Breeze, where some of the city’s wealthiest residents make their homes.

In fact, there were no murders at all in the huge area — mostly white and affluent — south of Penn Avenue down to Interstate 376. The murder-free zone runs from the eastern city limit up to the borders of Bloomfield and Oakland.

But from Penn Avenue and above — in East Hills, Homewood, Larimer, Lincoln-Lemington-Belmar and the northern part of East Liberty — there were 94 homicides during that six-year period. More than half remain unsolved.

Again, that’s nearly 100 murders on one side of the street, and zero on the other.

The Hill District had 42 homicides. More than half remain unsolved.

To call these areas “bad” neighborhoods is to ignore the daily efforts of good people trying to make a living, raise their families and make their community a safer place. This is plainly seen by anyone who bothers to cross arbitrary borders and meet their neighbors. Homewood North, which covers less than half a square mile, has had 19 murders since 2010.

Antwann’s death is one of those. It’s a common scene here, to lie dead from gunshots just a short jog from home. Yet it would seem unthinkable in so many of Pittsburgh’s other neighborhoods.

Born Anton Smith, he was known as Antwann to the family that loved him as a foster child for years and adopted him in 2010. He was an aspiring rapper with hopes of attending the Art Institute of Pittsburgh.

Around 9 p.m. on Sept. 16, 2013, police responded to a call for shots fired. Antwann was found among bullet casings in front of a home on Mt. Vernon Street.

By his grandmother’s telling, problems started years back after he wrote a song mocking losers in a school fight. This situation, like many others, escalated into a string of shootings.

One of those occurred just days before Antwann was killed. Carol’s son Jason Haddock, now serving a prison term, critically injured a 92-year-old jitney driver in a shooting while trying to hit someone else.

Carol thinks Antwann was shot in retaliation. There are witnesses who could say as much, she said. But because of disdain for police and fear of being called a snitch, she said they won’t come forward.

Police on Wednesday issued warrants for two of four suspected gunmen believed to have opened fire at the September vigil held in Antwann’s memory.

There were also witnesses at the Phase Bar in Homewood where Carol’s son Charles had been before being shot outside. Carol describes seeing his white tennis shoes sticking out from under the sheet. She knows too many others who understand that pain, even if most of the city doesn’t seem to care.

“Until you’ve got to stand and wait for the coroner to come pick up your kid, you don’t know what it’s like,” said Carol.

Eighty-five percent of Pittsburgh homicides have had a black victim. These include “random innocent victims that are just in the path of flying bullets,” said Dr. Karl Williams, medical examiner for Allegheny County.

They tend to involve overkill. Many wounds caused by powerful guns, often in the hands of young men.

“There are basically just a lot of gunshot wounds in a lot of parts of the body,” said Williams. Homicide victims often have numerous gunshots in several parts of the body, according to Dr. Karl Williams, medical examiner for Allegheny County. The majority of victims are young black men.

On their face, the killings are horrific.

Pittsburgh Police Chief Cameron McLay said that when he arrived in 2014 he felt that police and the community had become acclimated to violence.

"Not everyone in Pittsburgh enjoys the same quality of life,” McLay said recently. “There’s a victimology here that is completely unacceptable."

McLay said the outrage should be shared by everyone, not just by residents who see violence firsthand.

Under McLay’s leadership, officers have tried to rebuild damaged relationships with the community. Unless residents feel safe from violence and have basic faith in the justice system, police acknowledge that their work can be impossible.

McLay said he feels progress has been made. However, building trust takes time.

What’s at stake is basic public safety and the ability to do something so often taken for granted: to walk down the streets near home and not fear violence.

Her brother Mark “Bizz” Williams, 48, was killed by a gunshot to the head on July 31, 2014, on Bennett Street in Homewood. He wasn’t found until after sunrise. She can’t believe nobody saw.

“There’s too many windows, and there were too many people out that night,” she said.

If you have information on an unsolved murder in Pittsburgh, contact detectives at 412-323-7161. Callers can remain anonymous.

She left town shortly after a monument to him was defaced. She said she felt threatened, and, after more than a year, there’s still been no arrest.

As the police and the rest of the community seems to move on, she’s taken it on herself to keep interest going in the case. She posts many times a day to a Facebook group, sharing videos and photos in his memory, offering up a $30,000 reward to incentivize people to come forward.

There’s been some progress, she said.

But there’s a familiar frustration. Violence deeply affects a family, but elsewhere, the city is indifferent.

“We need other people to be outraged and say this is going on in our city,” Tamara said. “Not just Homewood, the Hill District or North Side.”

A grant from the Fund for Investigative Journalism funded this PublicSource project.

Megan Harris of WESA and freelancer Ryan Loew contributed to this report.