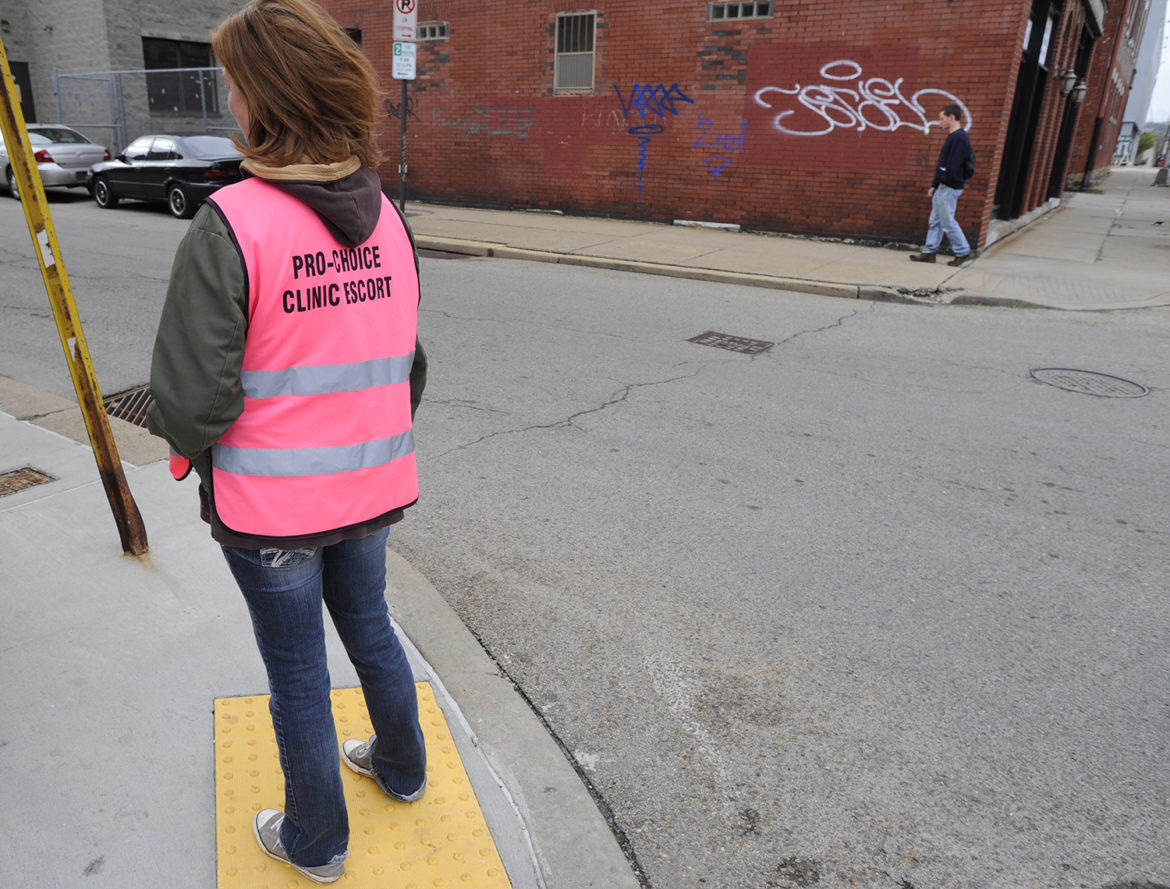 A clinic escort stands down the street from the East Liberty Allegheny Reproductive Health Center in East Liberty, while a protester stands across the street. The escorts volunteer their time to accompany women from their cars, down the street and through the buffer zone around the clinic, shielding patients from protesters. (Photo by Connor Mulvaney/PublicSource)

The purr of a religious hymn broke the stillness of a Saturday morning in downtown Pittsburgh. Gathered on Liberty Avenue, two groups vie for attention in front of the Planned Parenthood of Western Pennsylvania.

On one side, protesters don signs and offer pamphlets with Bible verses and images of disfigured fetuses. The other wears neon pinnies with three words: Pro-Choice Clinic Escort.

“You become very good at spotting potential patients. They have a look about them,” said Laura Horowitz, 61, who has been a volunteer clinic escort since the early 1990s. “People who look like they're lost are probably for us.”

The escorts envelop the patient in a C-pattern to shelter them past the crowd of protesters, one of the last obstacles for women seeking abortions before reaching the doors of the clinic.

Abortion providers are scarce. Two of Pennsylvania’s 19 abortion clinics are in Pittsburgh, making it a destination for women in Western Pennsylvania and neighboring states — and also a target for anti-abortion protesters who want more restrictions and to discourage women from ending their pregnancies. Traveling near and far

About 46 percent of women who got abortions in Allegheny County in 2014 were not residents of the county, according to Pennsylvania’s Department of Health annual Abortion Statistics report.

In 2014, slightly more than 4 percent of abortions in Pennsylvania were obtained by an out-of-state resident, according to the report.

Adrienne Jouver, 32, has volunteered with Pittsburgh Pro-Choice Escorts for the past two years at East Liberty’s Allegheny Reproductive Health Center (ARHC), a clinic that provides services to women who often cross state lines to get care.

“When I first started escorting and learning the ropes, we’re taught to look for out of state plates: Ohio, West Virginia, Maryland, even New Jersey or New York,” Jouver said. “I would say 50 to 60 percent of the people who come in are coming from farther away. They’re not local Pittsburgh.”

Between 2010 and 2015, lawmakers in more than half the states enacted nearly 300 restrictions on abortions, including physician and hospital requirements for abortion clinics, limited public funding, waiting periods between consultation and procedure, and parental involvement for minors.

In 2011, 89 percent of the 3,142 U.S. counties lacked abortion providers, according to the Guttmacher Institute, a research organization focused on reproductive health and rights. As a result, the average distance a woman in the United States (besides Texas) must travel to get to an abortion provider is more than 59 miles, according to an article from the New York Times.

In Pennsylvania, during 2011, there were 47 abortion providers, according to a Guttmacher survey. Nineteen of those are abortion clinics, which are the more accessible option for most women. Ten clinics are in Southeastern Pennsylvania, seven of which are in the Philadelphia area. The two in Pittsburgh are the only clinics in the western half of the state.

The remaining providers include hospitals, family practitioners and non-specialized facilities. Hospitals typically only perform abortions in high-risk situations, according to a Guttmacher research scientist.

Many providers offer abortions on specific days because of the length of the procedure. Saturdays is typically when more patients, and protesters, show up.

Pennsylvania law requires a 24-hour waiting period before an abortion and for a patient to be made aware of alternatives to abortion and medical assistance related to childbirth. Minors must also receive parental or guardian consent before the procedure.

Public funding for abortions can only be used in cases of rape, incest or life endangerment. The procedure can cost between $400 and $1,100, according to Planned Parenthood.

Pennsylvania Republican lawmakers recently tabled legislation that would have prohibited elective abortions after 20 weeks and a procedure that aborts fetuses by removing body parts. Planned Parenthood has said the proposed legislation would have made the state one of the most restrictive in the country, and Gov. Tom Wolf promised to veto the bill.

Jouver, a librarian, became involved as an escort following media coverage of a 2014 Supreme Court case in which the justices unanimously decided the First Amendment rights of anti-abortion protesters were violated by Massachusetts’s statewide buffer zone law. That law established an area outside clinics that was only allowed to be crossed by those entering the clinic.

In Pittsburgh, the buffer zone remains. It encompasses the area 15 feet from the clinic door and it’s meant to be a content neutral zone marked as a yellow bubble.

At both clinics in Pittsburgh, escorts stand at the ends of the sidewalk, outside of the buffer zone, waiting for patients. Anti-abortion protesters either stand across the street with their signs or along the buffer zone.

Nikki Bruni, an anti-abortion protester, has advocated on Pittsburgh sidewalks for seven years with two organizations. In September 2014, Bruni, along with four other plaintiffs, sued the city of Pittsburgh, arguing that the buffer zone was selectively enforced in favor of clinic escorts and against protesters.

The lawsuit also asserted that the buffer zone impeded protester’s freedom of speech, denying their right to distribute brochures, pamphlets and peacefully protest.

“There are some people going there who do not want an abortion; they just feel like they have to because they don’t have support or help,” Bruni said. “Having people standing on the sidewalk does not hinder them from going into the clinic.”

Bruni and the plaintiffs dropped the selective enforcement claim in March 2015, indicating they’d like to focus on challenging other dismissed claims in the 3rd U.S. Circuit Court of Appeals.

Saturday mornings on the ground

Jake Herring, a 40-year-old business developer, has volunteered for three years as a clinic escort and coordinator at the downtown and East Liberty clinics.

“It felt like I had these great big opinions, but I wasn’t doing anything, so I decided one year that I would look online. Where could I volunteer?” said Herring, adding that he grew up the son of a Baptist minister and worked in a conservative environment. He said he felt oppressed in a way and wanted to show his support for a cause.

Through Google searches, he landed on Planned Parenthood’s volunteer page, signed up and now acts as a coordinator — an escort designated to gauge the surroundings to keep both the patients and escorts safe throughout the morning.

There’s usually one coordinator on duty each week, with about six to eight escorts, depending on how many protesters are present.

Before jumping into the role of clinic escort, volunteers go through five-plus hours of training, including role play, watching videos, how to spot patients and how to deal with anti-abortion protesters.

As of 2014, one out of 7 Pennsylvania women between the ages of 15 to 44 lived in counties 50 miles or more from the nearest abortion clinic.

“Not everybody who is very supportive of reproductive justice is the right material to be an escort,” said Horowitz. “We want to make sure that people know what they were getting into and also understand their parameters.”

Horowitz began volunteering when violence at abortion clinics in the late 1980s and early 1990s was in full throttle nationally. In 1989, a day of demonstrations resulted in the arrest of 190 protesters; some of those arrests stemmed from protesters dumping 25 gallons of tar in a clinic hallway.

After complaining to a friend about the violence, Horowitz said she felt compelled to find an outlet to make a difference.

As coordinator, Herring’s Saturdays begin before 7:30 a.m., prior to other escorts and patients arriving for appointments. Escorts dedicate anywhere between three and six hours each Saturday.

Across the street, protesters stand in line, holding Bibles, shouting phrases like: “You’re still a mother. That’s your baby you’re killing” or “Don’t you know they kill babies in there?”

In the summer of 2015, about 150 anti-abortion protesters lined the streets of Liberty Avenue to protest Planned Parenthood.

“When there’s 12, 15, 20 protesters out there, you don’t get a lot of problems. When there’s 150 and they’ve got the force of a common mindset, then they get more aggressive,” Herring explained.

Large groups of anti-abortion protesters in East Liberty are bussed in from Franciscan University, a Catholic university in Ohio.

The physical presence of protesters is arguably the most overwhelming part for women seeking care, Herring said.

Bruni volunteers as the Pittsburgh coordinator of the nationally organized 40 Days for Life organization. Twice a year, she helps to bring together members of more than 100 churches in the Pittsburgh area to “stand witness” and pray.

She also volunteers with Sidewalk Advocates for Life, an organization to provide support for women who feel uneasy about abortion by providing counseling, prayers and literature about fetal development.

“I think that nobody can understand what we’re doing, or why. They’re always going to think we’re there to judge people having abortion or intimidate those trying to have an abortion,” Bruni said. “They’ll never understand what … we’re doing unless they understand our faith.”

Many lawmakers share her view, leading to restrictions that further limit health care choices for women who want to end their pregnancies.

In Pittsburgh, the clinic escorts become close over the weeks spent volunteering amid the chaos. They each volunteer for different reasons. It’s a job they’re passionate about but wish wasn’t necessary.

“It’s double-sided,” Jouver said. “We wish we didn’t have to be here, and it wasn’t this level of harassment for women seeking care.”