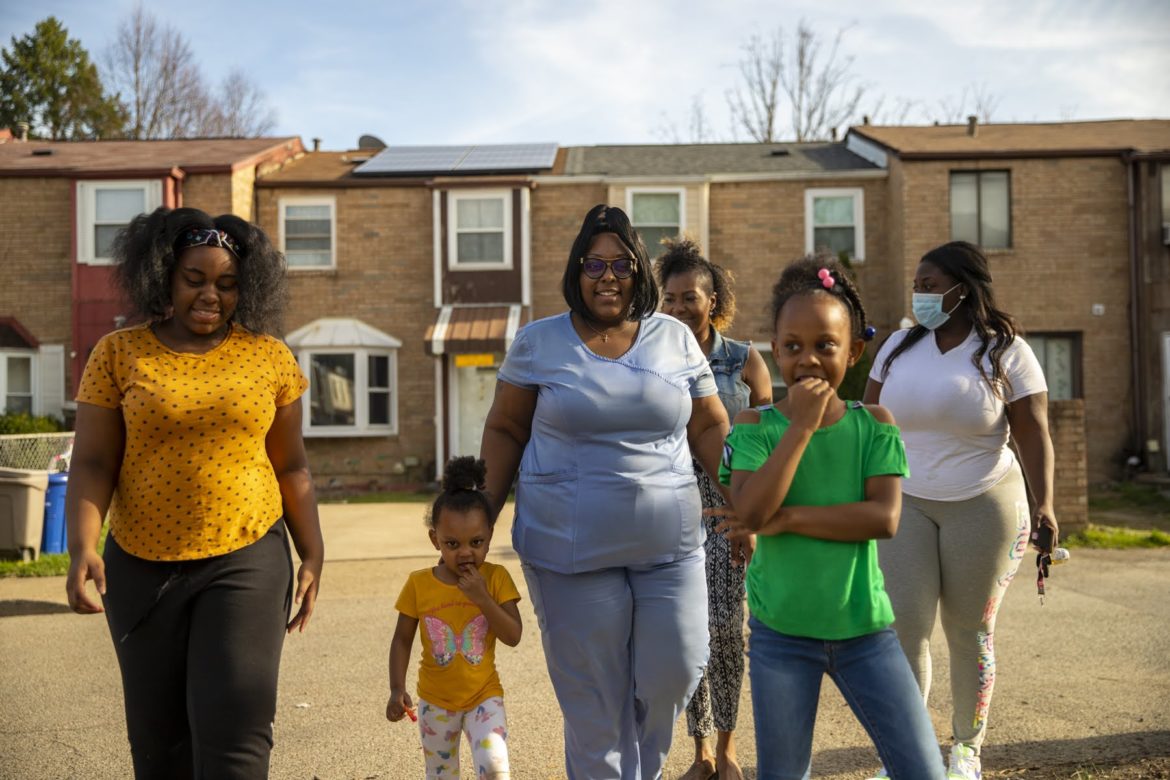 The Devines are only moving one block. But for Jasmine and her three daughters, the impending relocation within a little square called Enright Court is a big jump, and not just because they’ll have a fourth bedroom, plus a bigger yard.

They’ll finally own a townhouse, rather than renting. With that, they’ll be gaining some control over their destinies in East Liberty, a neighborhood where demolitions and rising rents have torn many families out by the roots.

“I’m building a legacy for them,” said Devine, 32, as she stood in her current driveway with her eldest daughter, Jah’Niya, 13. “All she’s worried about is, like, decorating her room.”

“I want, like, a lot of teenage stuff, like luxury stuff,” Jah’Niya confessed. “I want a mirror with lights around it.” Her sisters, ages 6 and 3, want purple or pink bedroom walls.

The family’s plan to buy a townhouse, paint walls and put up mirrors is a counterpoint to a 20-year trend in East Liberty, which has seen a loss of around one-quarter of its nonwhite population since 2000. The move is being facilitated by East Liberty Development Inc. [ELDI], a nonprofit that has been central to the neighborhood’s stunning – though controversial – transformation. 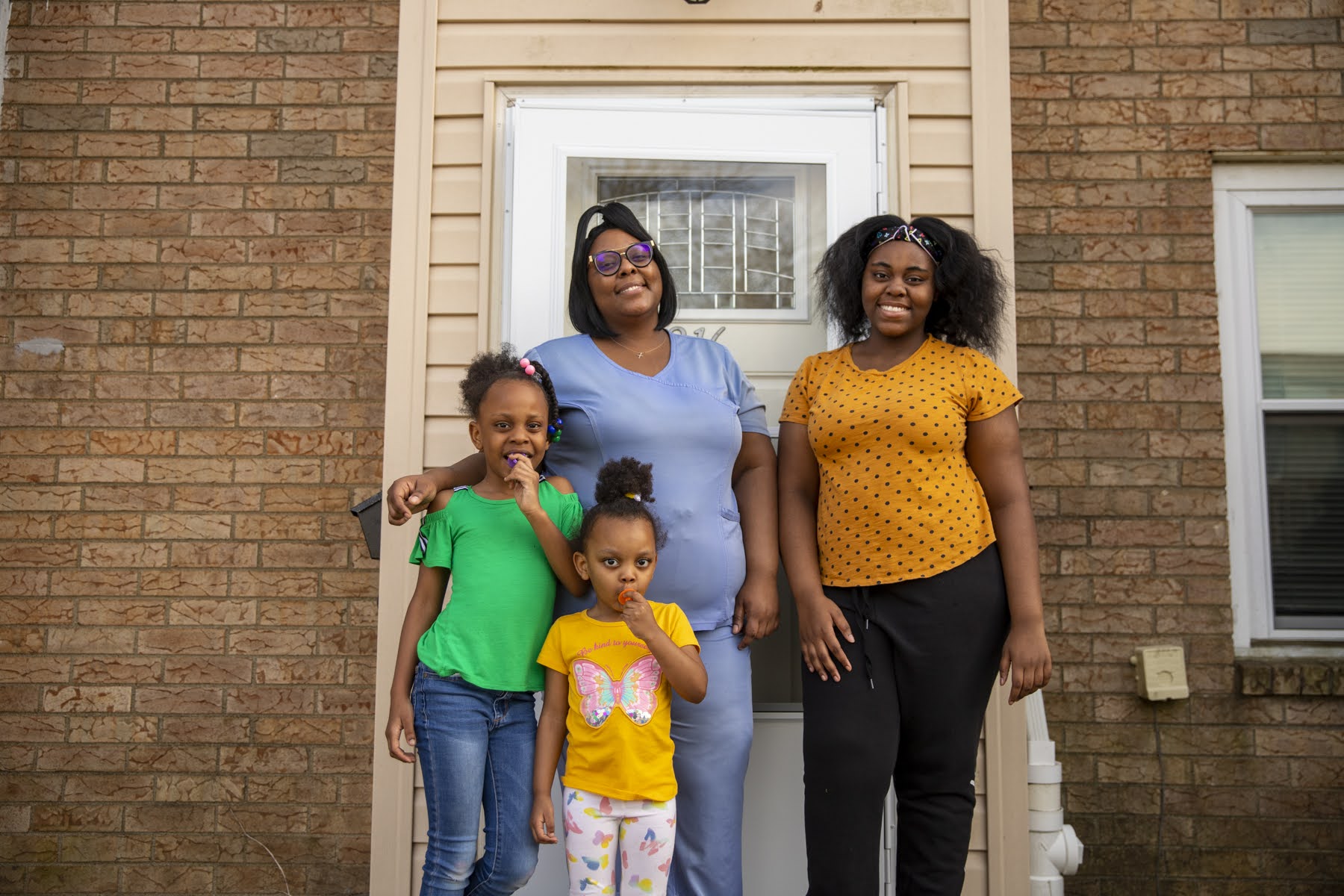 Jasmine Devine (rear) and her three daughters (from left) Nylah (6), Erionna (3) and Jah'Niya (13) stand in front of the townhouse they now rent in East Liberty's Enright Court. (Photo by Jay Manning/PublicSource)

Today ELDI is in the midst of a systematic, and labor-intensive, bid to return Enright Court to its roots as a bastion of homeownership. The organization views its efforts in the enclave as one of the final — and urgent — pieces in the redevelopment of East Liberty.

“The cement is drying in East Liberty,” said Ted Melnyk, ELDI’s director of operations, meaning that the real estate market is solidifying. “The market has changed so much that if you don’t get people into affordable housing situations before the cement dries, you’re never going to get them in.”

The 99-home Enright Court was intended to be a homeowner haven when it was built, largely in 1970 and 1971. At that time, East Liberty’s population was nearly 9,000. More than three-quarters of residents were white.

ELDI has sought to preserve homeownership by temporarily becoming Enright Court’s biggest landlord. Over more than a decade, the organization bought (or took via conservatorship) around two dozen of the court’s units, renting them out while selling seven, so far, to owner-occupants. The plan is to sell the rest over a few years. Preferred buyers include tenants, like Devine, who plans to leave a townhouse rented from ELDI after the organization sells her one up the street.

Some of ELDI’s townhouses will sell for market rates, Melnyk said. “We don’t want it to be all low income,” he said, during an interview at a just-renovated townhouse he said might sell for $170,000.

In other cases, though, ELDI is going through the challenging process of assembling financing to help households of modest means — some making as little as 60% of the area median income — to buy homes. Those generally go for $120,000 or $145,000, depending on the buyer’s income.

Below-market sales are possible because of programs like the city’s Housing Opportunity Fund, but they still involve matching an atypical homebuyer with a willing mortgage lender. For that, ELDI works closely with Catapult Greater Pittsburgh, an East Liberty-based nonprofit dedicated to building stability and wealth in disenfranchised communities.

Brettney Duck, Catapult’s director of homeownership, counseled Devine for more than a year. Duck said Devine was more disciplined and focused than some of the program’s participants. Even with discipline, though, buying a first home is challenging.

“They already know what their credit needs to be,” Duck said. “But they don’t know, how do I get pre-approved? What is a sales agreement? How do I get a real estate agent?” The process “can be a struggle, especially when you come from poverty, because you’re already fighting all of these other things.” 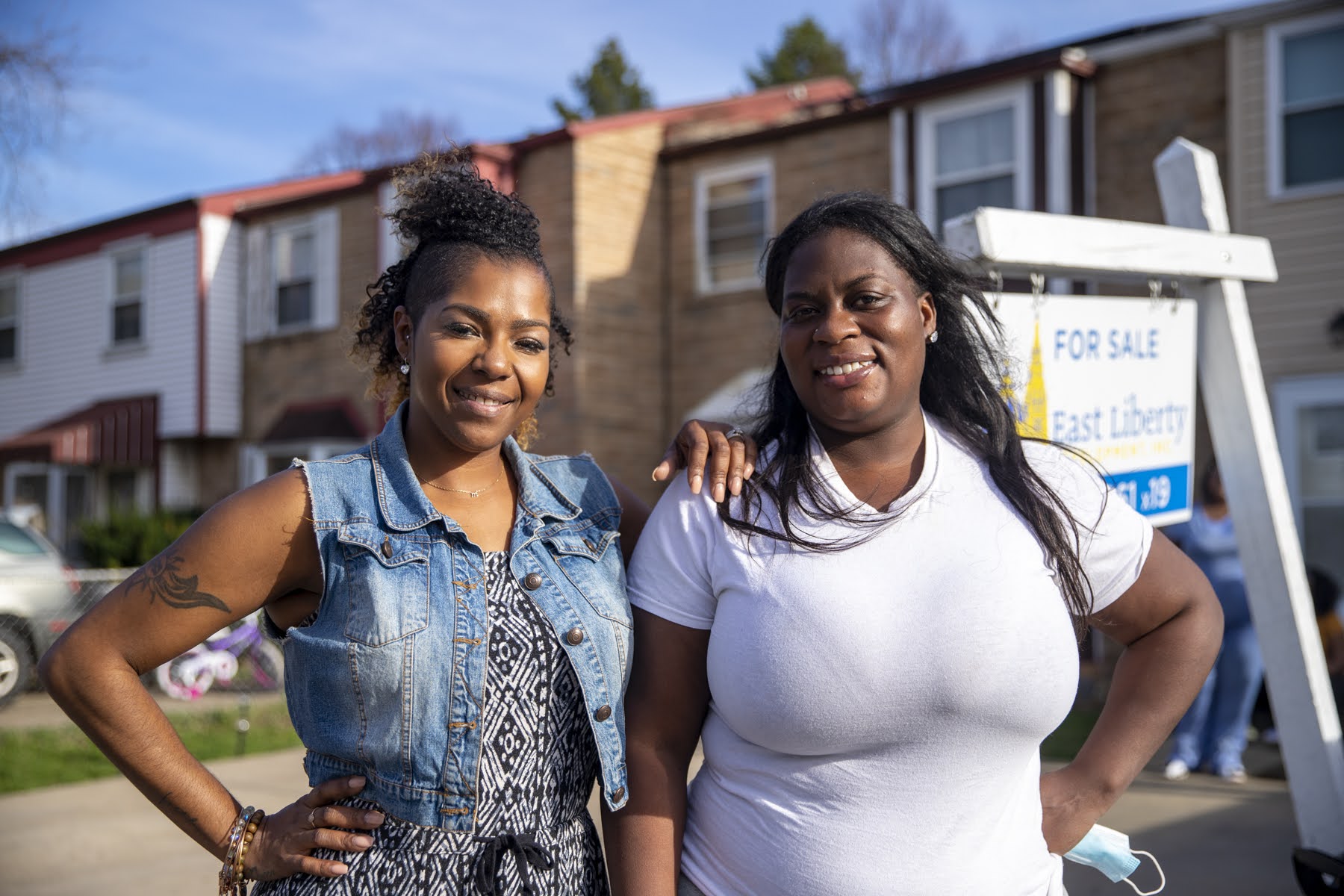 The pandemic forced much of Catapult’s work to go virtual. On the plus side, it may have accelerated Devine’s progress on improving her credit. Early in the lockdown, the medical assistant realized: “I can start really saving money! I need to stay in the house more often.”

Devine is a Homewood native who has lived in East Liberty since 2013 and rented from ELDI for around three years. She was encouraged to consider homeownership by Mary Hester, of LifeVenture Real Estate Services, which sells property for ELDI.

The concept appealed to her. “I’ve got three kids,” she said. “I need to start teaching them a little bit more stability.”

‘Bombed out’ or dynamic?

Instability bedeviled East Liberty after the construction of Penn Circle, which turned the business district into a pedestrian mall encircled in a one-way loop, now widely considered one of the great misfires of 1960s urban planning. Hundreds of businesses closed, and population declines that started in the 1950s accelerated — but largely on one side of the racial divide. From 1970 through 2000, the white population plunged by almost 80%.

A new community emerged as the number of Black and other nonwhite residents nearly tripled and, by 2000, more than three-quarters of residents were minorities.

Randall Taylor, a neighborhood activist who served on the Pittsburgh Public Schools board at the turn of the century, described the East Liberty of that era as “a dynamic place” with a central location that favored commerce. It had a reputation — unwarranted in his view — for crime.

Melnyk said pressures including the local steel industry's collapse and the crack cocaine epidemic led to deterioration of East Liberty’s housing and business district. “This place was bombed out.”

ELDI in 1999 released a community plan pledging “a new beginning.” At the time, a new Home Depot store was under construction, marking the beginning of a retail resurgence.

Some low-income housing was being converted into mixed-income developments. Still, 1,400 subsidized apartments remained in what the plan described as “large superblock multifamily housing developments,” including some that were “poorly managed.”

Over nearly 20 years, that housing stock was replaced, culminating in the demolition of Penn Plaza amid heightening concern that longtime residents could no longer afford to live in the neighborhood.

Average market-rate rents in the ZIP Code 15206, which includes East Liberty, rose from $1,541 in March 2017 to $1,661 in March 2021, according to RENTCafe.com, an apartment search service that conducts telephone surveys of landlords with more than 50 units. The average rent for such properties citywide was $1,256.

Taylor lived in Penn Plaza for a time and helped to organize its residents. He said ELDI was “pivotal” to the neighborhood’s gentrification, as were city government and some state officials.

“They want to create a Pittsburgh for people who aren’t here,” he said. “They should’ve taken account of what East Liberty always was,” he added, saying it served working class people striving for a better life.

Melnyk said critiques of East Liberty’s transformation sometimes fail to consider the alternative: “Do you want to go back to the ’90s?” he asked. “Substandard housing, crime?” He added that the neighborhood still has affordable housing — but these days much of it is indistinguishable from expensive apartments.

A report issued by ELDI in late 2020 showed 979 rental units in the neighborhood that were subject to commitments of varying lengths that kept rents affordable for households of modest incomes. That was nearly one-third of East Liberty’s rentals, though the tally included some temporary housing for people experiencing homelessness and other social problems.

While affordable rents can curb displacement, Duck argues that ownership is the ultimate antidote.

While rent hikes can drive out tenants, fixed-rate mortgages don’t change, she said. A homeowner, she added, can take a stand: “If you [want to] drag me out of here, you better come with an army, because I own this.”

Charlene McCoy bought a house in Enright Court from her aunt in 2006. She’s seen a lot of change while raising two sons here. “Enright Court is starting to be mixed, which is good,” she said. After all, she said, “We all have to get along.”

Overall, she’s happy with the neighborhood’s evolution. “East Liberty moved up. The value of Enright Court moved up,” she said. “I’m about to sell.”

She figures that by selling her house soon, she can get enough to buy three houses in Penn Hills or Braddock. That would include one for a son, a second to fix up and sell, and her own “forever home.”

A decade ago, such a plan would have been folly. The average sale price for an Enright Court townhouse was below $16,000. Now the average is four times that, pulled up by several recent sales in the $140,000 range.

Even at that price, Enright Court looks “extremely affordable” to Taylor. He’s been critical of ELDI’s role in East Liberty’s transformation but respects their work in Enright Court. “I think that’s a very good thing that they’re doing,” he said, adding that he’s considering trying to buy one. 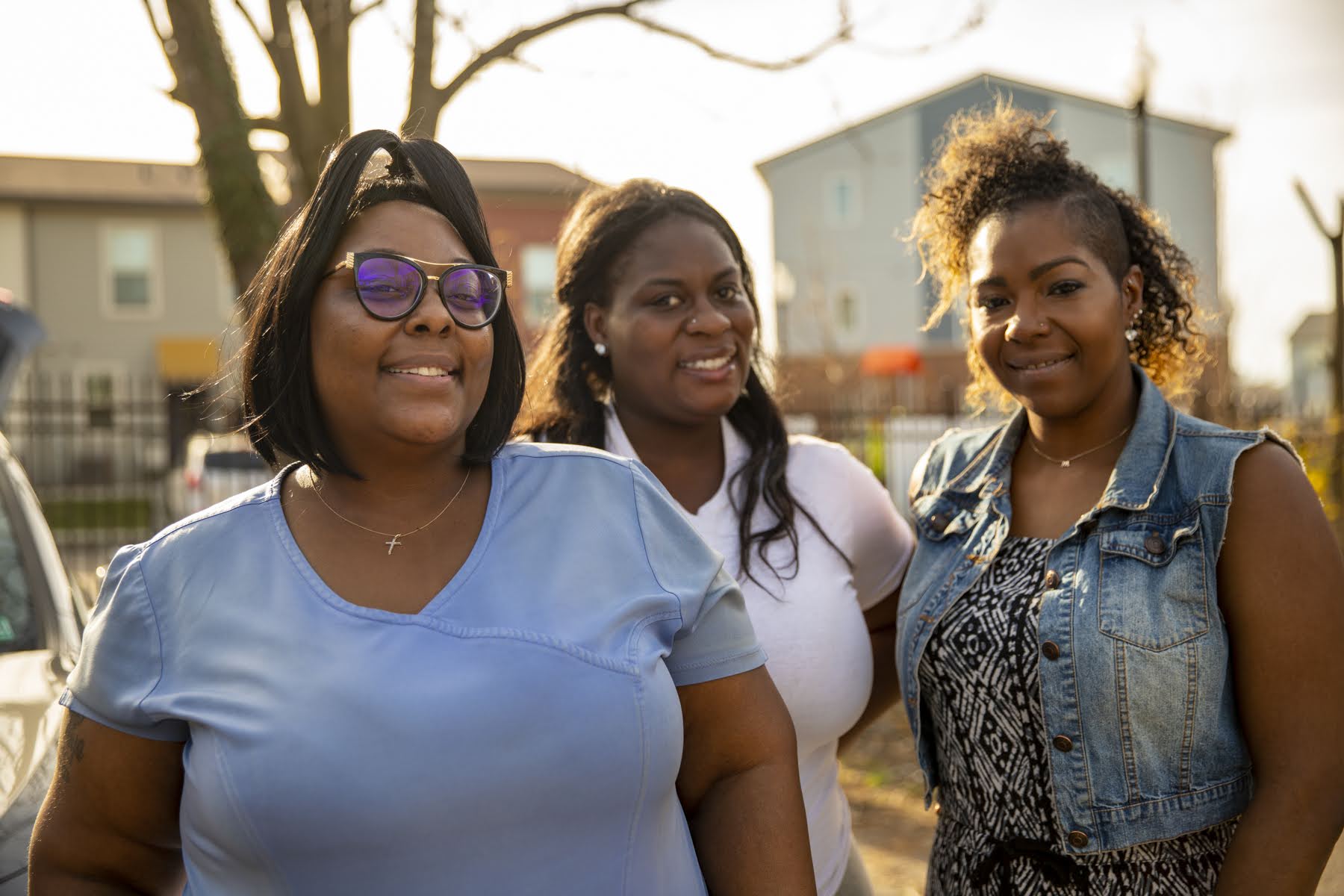 Jasmine Devine of East Liberty's Enright Court (left). Brettney Duck of Catapult Greater Pittsburgh and Mary Hester of LifeVenture Real Estate Services have worked together to get Devine lined up to buy a townhouse for herself and three daughters. (Photo by Jay Manning/PublicSource)

There is already a for-sale sign in front of the townhouse that Devine now rents. She’s pre-approved for a mortgage, and waiting to sign an agreement of sale, after which she’ll move one block north. As soon as she's out of the rental, ELDI and Hester will try to put a new homeowner there.

Devine is betting on Enright Court. Close to schools, bus lines and stores, it has plenty of kids playing in fenced-in backyards. She envisions the possibility of handing down a townhouse to her children.

In the short-term, though, there are forms to sign, then toys to move, walls to paint, mirrors to install. Said Devine: “I am going to be here a while.”