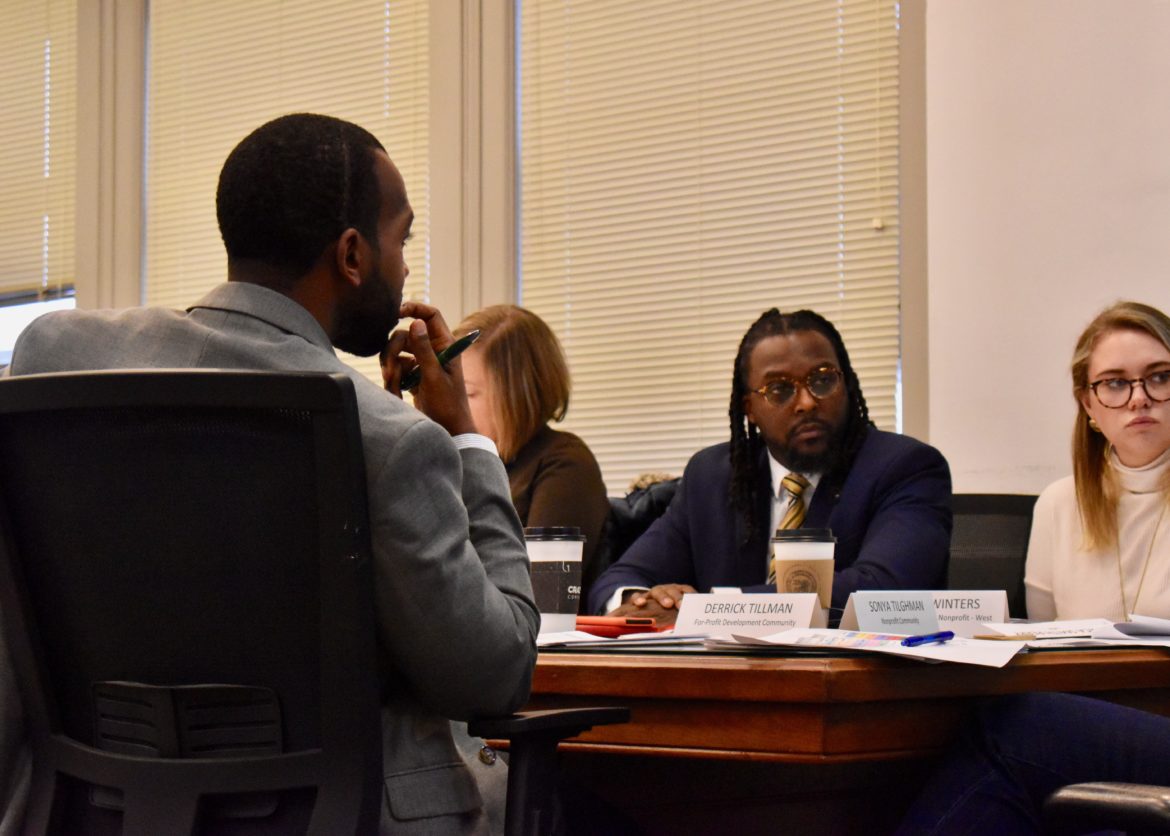 After 45 minutes of discussion about future spending for the Housing Opportunity Fund, the fund’s advisory board and housing advocates reached a common conclusion: the fund could use more than $10 million a year.

“It ultimately comes down to, we don’t have enough resources to go around,” advisory board member and developer Derrick Tillman said after the meeting. In his view, the Housing Opportunity Fund [HOF] has done a good job allocating funding to a variety of programs that do things like cover closing costs for new low-income homeowners and provide gap financing for developers to create rental housing below market rate. But the money is not enough.

He proposed creating a working group to bring in new funding sources, including from the City of Pittsburgh and foundations. “These funds are having a huge impact. We’re just at the beginning,” said Tillman, who is president and CEO of Bridging the Gap Development.

“We need to expand the pot,” Uber said. “We can and we should be demanding more.”

Created by Pittsburgh City Council in 2016, the HOF allocates $10 million annually to affordable housing programs. The Urban Redevelopment Authority [URA] manages the HOF’s programs, which are funded annually by real estate transfer tax revenue. Decisions on spending are made by the URA board based on recommendations by the 16-member advisory board. City Council approves the yearly allocation plan.

Some HOF programs were allocated with less money than before or no funding because prior allocations weren’t fully spent. Those include the for-sale development program, which pays for new housing construction and refurbishment, and the demonstration program, which provides emergency housing funding. The 2020 draft allocations for those two programs are $500,000 and $0, respectively.

Funds were also left over in the down payment and closing cost assistance program. Smith Perry said more people are learning about the program and that applications are on the rise.

Last month, $200,000 from the demonstration program was given to the Downtown Pittsburgh homeless shelter for repairs needed to stay open. Because the remaining $300,000 from 2019’s budget is still available, the proposed 2020 budget does not allocate any additional funding to the program.

The fund’s first two years of funding were finalized only about a half-year apart, with the HOF”s inaugural funding approved by council in December 2018 and its 2019 funding approved in June.

Several advocates raised concerns that information on agenda items still isn’t being made available to the public early enough. “Our goal is for the community to be speaking for themselves,” said Pittsburgh United affordable housing organizer Celeste Scott. Scott noted that low-income residents may not have access to the internet to learn about meetings or provide comment.

“People are not getting online to fill out a Google form,” Scott said.

Before approving the draft plan, the advisory board considered feedback on HOF spending from a public survey with roughly 300 respondents and community meetings hosted by URA staff.

The advisory board also voted to use $650,000 from HOF’s 2019 allocation as a rental gap program loan for phase 4 of the Choice Neighborhoods project, which will add 333 mixed-income units as part of a larger project in Larimer and East Liberty. The project is funded in part by a $30 million federal grant.

Smith Perry said the housing will be marketed heavily toward seniors at the request of the community. The Larimer School gym and auditorium will be renovated for community uses, to be determined at a later date. The Housing Authority of the City of Pittsburgh will own the land for 99 years to protect affordability, Smith Perry said.

Donna Jackson, chair of the Larimer Consensus Group, said of the project’s intention: “When the blight was coming through, it was like a bulldozer came through Larimer and just wiped everything out, and Larimer school is the last standing historical site in this community. We want people to be able to live, walk, work and be safe in Larimer.”

Megan Hammond, the program director at Fair Housing Partnership, questioned the advisory board about the accessibility of the planned affordable units. She said that accessible, affordable housing is “a No. 1 concern” in Pittsburgh, and that there are not enough first-floor units being built throughout the city to meet the need.

According to Lindsey Evans, who represented developer McCormack Baron Salazar at the meeting, 10% of units in the new phase of Larimer development will be accessible, exceeding the 5% requirement required by the U.S. Department of Housing and Urban Development grant.