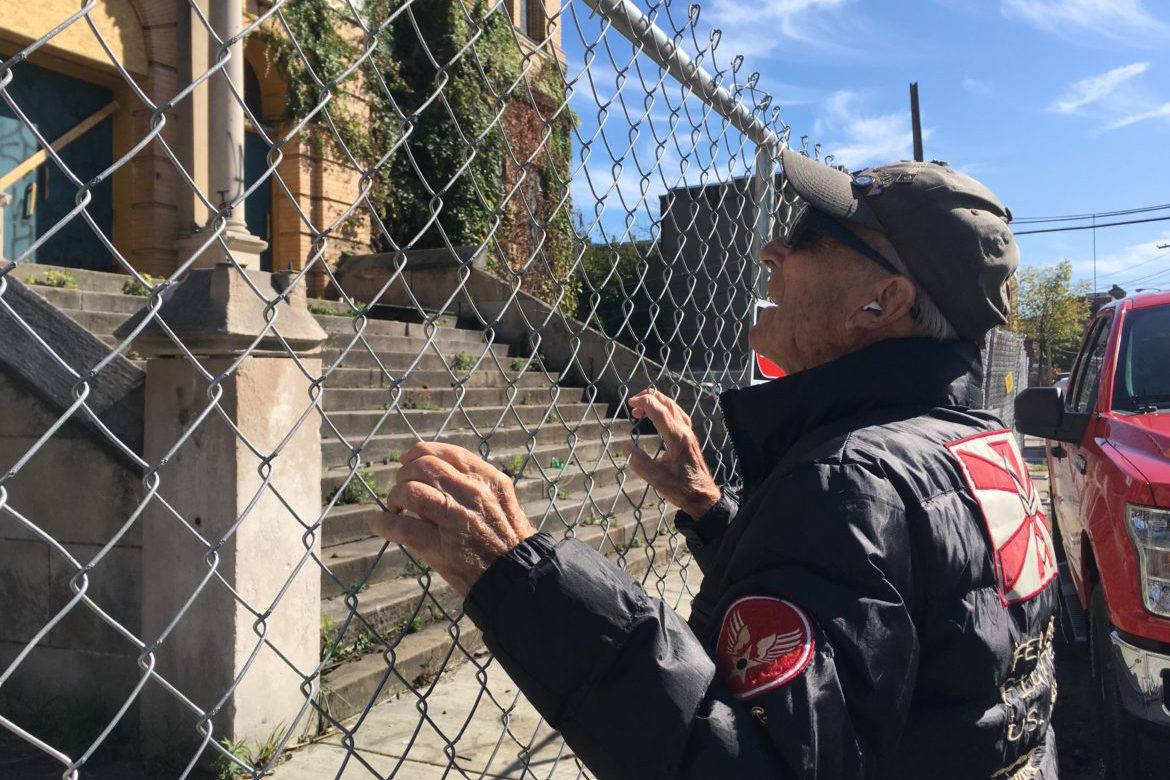 Larimer resident Anthony Mainiero reacts upon learning that his former church and school, Our Lady Help of Christians, was already partially demolished in October 2019. (Photo by Remy Davison/PublicSource)

Joseph Marinello is the last of his family left in Larimer. Now 90, he’s lived his whole life there, and he and his wife, Dolores, live in the home where he grew up with his two sisters.

Over the decades, the couple has seen blight come to the neighborhood, businesses close down and families continue to move away, including members of what was once a robust Italian community. They watched Larimer gain a reputation of being run down, and its residents felt shunned by others in Pittsburgh.

But much has changed in recent years, largely due to grassroots advocacy from residents to spur development projects like the transformation of the former Larimer School into housing and the building of the Cornerstone Village mixed-income housing complex. Both projects are being funded in part with a $30 million grant from the U.S. Department of Housing and Urban Development.

“We deserve it,” Dolores Marinello, 80, said. “We’ve waited a long time. We fought hard to get the money to redevelop, the whole community did.”

She calls the projects “a dream.” But in reality, they’re the result of years of work by Larimer community members who refused to let their neighborhood be forgotten even through hard economic times and lack of government investment. After decades of white flight, the neighborhood between East Liberty and Homewood is majority-Black.

One of the neighborhood’s most vocal advocates, Ora Lee Carroll, formed an organization called East Liberty Concerned Citizens Corp. in the early 1980s to draw attention to problems facing Larimer and nearby East Liberty and Garfield.

Carroll passed away in 2013, but her advocacy helped bring together a group of residents and community organizations that in 2008 formed the LCG. 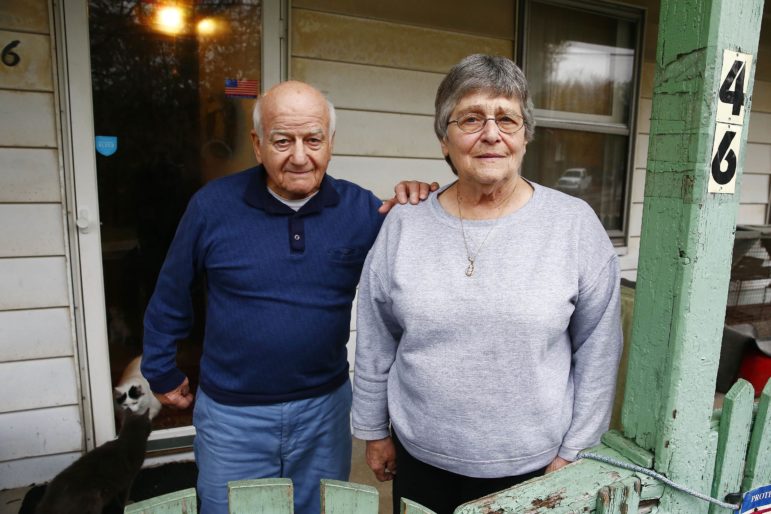 Dolores Marinello, 80, and her husband, Joe Marinello, 90, pose for a portrait on the front porch of their Larimer home on Nov. 7, 2019. (Photo by Jared Wickerham/Pittsburgh City Paper)

To guide the neighborhood forward, the LCG in 2010 created the Larimer Vision Plan, a comprehensive development plan that would eventually form the foundation of a federal Choice Neighborhoods grant application, which dedicates funding to projects in Larimer and East Liberty. The Larimer Vision Plan included a neighborhood-wide land use strategy for new housing and the development of greenspaces, sustainability initiatives and plans for future business development.

In 2013, city Councilman Rev. Ricky Burgess sponsored a bill that would dedicate $12 million in city money toward the project over five years. This increased the community’s chances of being picked for the federal Choice Neighborhoods grant, according to Caster Binion, executive director of the Housing Authority of the City of Pittsburgh [HACP]. He also noted the importance of community involvement to the federal government’s decision-making.

“When they came out and saw our presentation, and saw the commitment from the community… the synergy, you get goosebumps just being there to see this closeness,“ Binion said. “And when they went back to D.C., they said they have never, ever seen anything like this.”

The June 2014 grant award was a game-changer for the neighborhood. Groups like the Kingsley Association and the LCG could help with “low-hanging fruit,” like helping residents keep their utility bills down, but Jackson said the main need was quality housing, and the community lacked resources to build it.

While the grant brought a needed influx of cash, residents stressed the importance of having a say in development, ensuring that the projects would align with the neighborhood’s needs.

One example is the Larimer Homeowner Residential Façade Program, a project that Jackson said came straight from the community. Using money from the federal grant, current residents can update their homes to match the new Choice Neighborhoods development, meaning that current residents can share the benefit of the new construction.

“We got together before the development came in,” Mary Turner, 70, said. “Some of that money was supposed to have been for the homeowners who’ve been living here in their homes for over 10 to 20 years.”

In the end, the community secured the funds. Residents can obtain grants of up to $20,000 through the façade program.

Turner moved to Pittsburgh from Georgia with her three kids 47 years ago.

After seven years in Homewood, she moved to Larimer in the late 1970s and raised her kids in a house on Carver Street. She said the neighborhood gave them a stable foundation, and it’s the reason she’s made Larimer her permanent home.

“I’m building my foundation on, ‘I will never move again,’” she said, describing the security she tried to build for her family. “I’ve made them a home … so if anything went wrong as they grew, come home.” 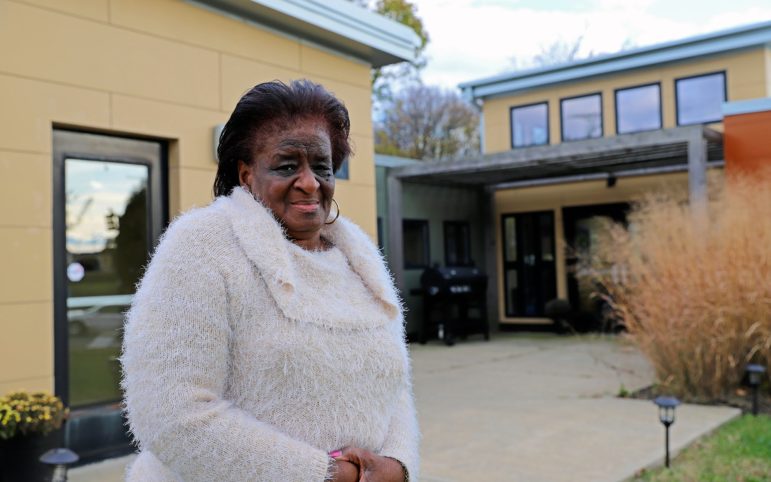 Donna Jackson, chair of the Larimer Consensus Group, outside of her office at the Environment and Energy Community Outreach Center. (Photo by Jay Manning/PublicSource)

Throughout the grant process, the LCG has often dedicated its regular meetings to informing residents about the project. According to the 2015 American Community Survey, Larimer had an estimated population of 1,641 people. While residents agree on the need for development, they had differing views on issues like the ratio of housing to businesses and whether Larimer School should restrict housing to senior residents. According to Jackson, meeting attendance fluctuates. October’s meeting on park and greenspace development had about 60 attendees.

The meetings serve as a community touchpoint for local government and developers.

“It’s an ongoing process with community input,” Binion said. “I mean, if I go to the grocery store, somebody will walk up and talk to me.”

Cady Seabaugh, vice president of communications and sustainability for developer McCormack Baron Salazar, said the community has been an important driver of the project. Seabaugh said the developer has regularly met with an oversight committee, comprised of residents and stakeholders.

Though built from the ground up, Cornerstone Village is not really all new housing. It is replacing East Liberty Gardens (a now-demolished 124-unit housing development on the border of Larimer and East Liberty) and Hamilton-Larimer (a demolished 28-unit public housing complex) with a 334-unit mixed-income development.

Housing authority staff and community organizations such as LCG and East Liberty Development, Inc. worked to keep residents from being permanently displaced. 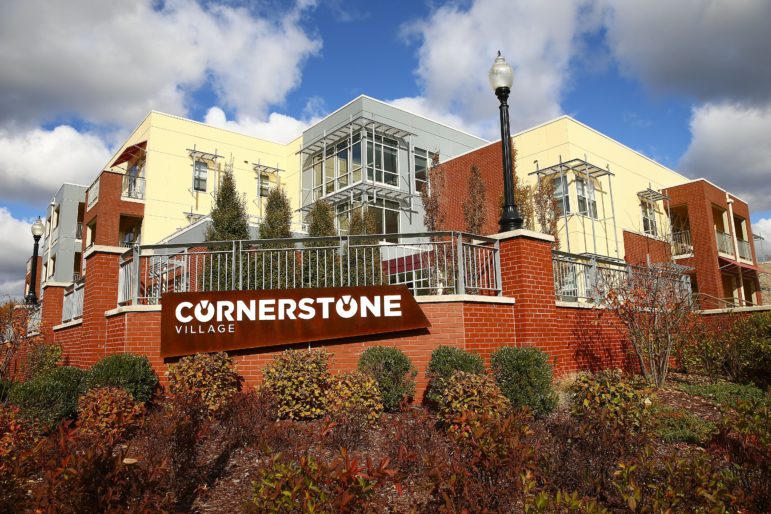 The Cornerstone Village Apartments in the Larimer neighborhood on Nov. 8, 2019. (Photo by Jared Wickerham/Pittsburgh City Paper)

Residents were given housing vouchers while Cornerstone Village was being built. According to Jackson, students were also given transportation back to Lincoln PreK-5, so they didn’t have to change schools.

JW Kim, director of planning and development for HACP, said they met weekly to discuss the relocation of each household and followed up to make sure they were not evicted from their temporary housing. At the completion of Phase II, 60% of displaced residents now live in Choice housing, according to the housing authority. After the completion of Phase IV, the authority expects that percentage to climb to more than 70%.

LCG, along with the national nonprofit Urban Strategies Inc., also developed programs focused on subjects such as workforce development, substance abuse recovery and financial literacy, funded in part by the federal grant.

Looking toward the future

While the new developments have been cheered for bringing in new housing, some residents worry it’s not enough.

Frank G. Raucci Jr. and Anthony Mainiero have lived in Larimer since they were children. As they drive up Larimer Avenue, they can point to street corners and new housing and tell you exactly what stood there decades prior. They talk about theaters, barber shops, a shoe store and bakeries that have all left Larimer or gone out of business.

Mainiero, 99, pointed to Larimer Avenue and Auburn Street and talked about the old Flamingo Roller Rink and the girls he used to dance with in the local dance halls.

For Raucci, 78, his primary concern is businesses coming back to the area. “A lot of the businesses that you know today started on Larimer Avenue,” he said. He listed Labriola’s Italian Market (now in Penn Hills, Aspinwall, Monroeville and Warrendale) and Moio’s Italian Pastry Shop (now in Monroeville) as examples. 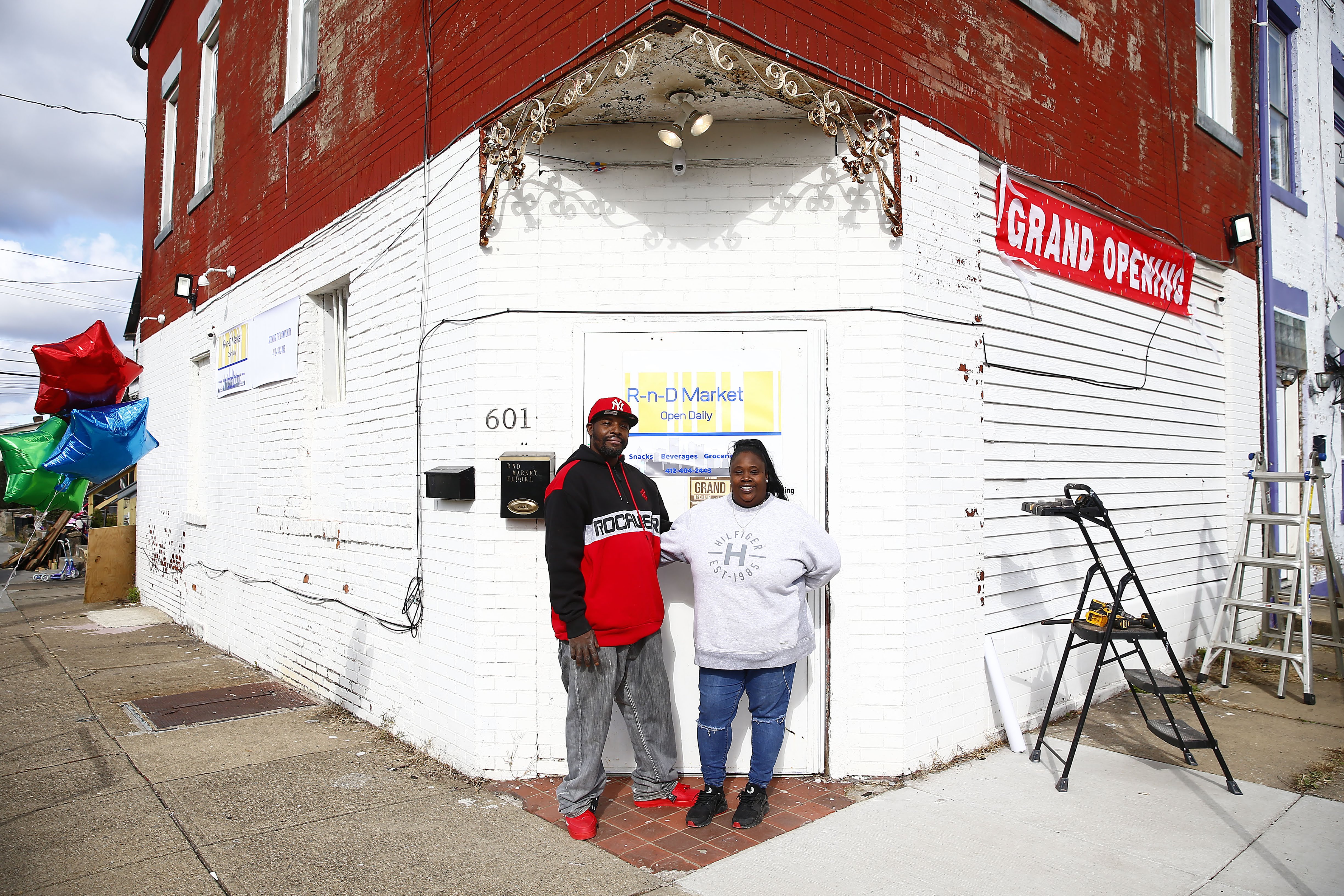 Dena Young-Rivers and her husband, Ron Rivers, pose for a portrait outside R-n-D Market on its grand opening in the Larimer neighborhood on Nov. 8, 2019, in Pittsburgh. (Photo by Jared Wickerham/Pittsburgh City Paper) 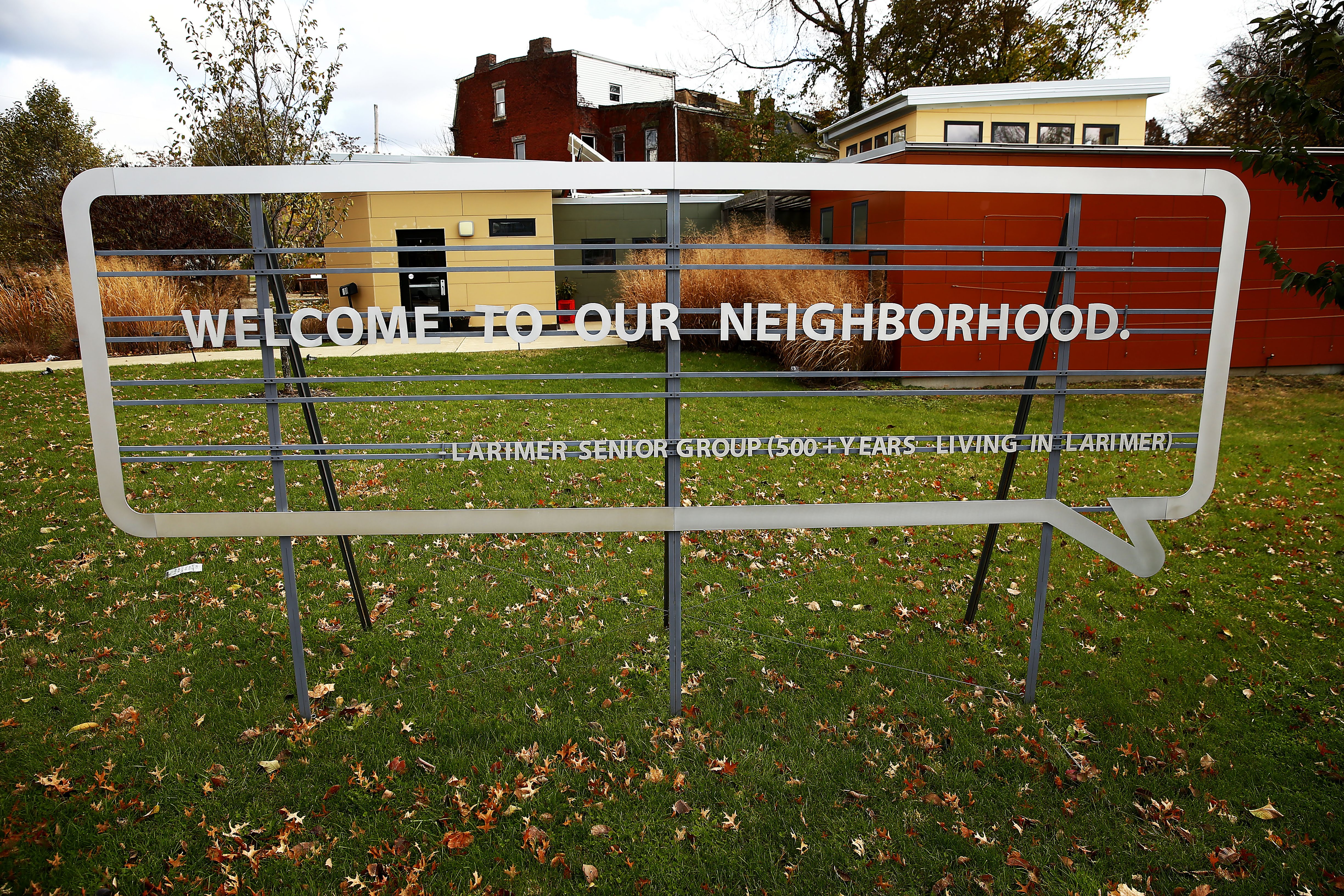 The 'Welcome to our neighborhood' sign by the Larimer Senior Group. (Photo by Jared Wickerham/Pittsburgh City Paper)

Raucci feels that building new housing only goes so far to revitalize a community. Without the businesses, he said people won’t move back to Larimer.

Rosia Williams, 73, agrees that bringing some business back to Larimer is an important part of building up the community. Williams has lived in Larimer for 27 years and said she always felt like she needed to leave Larimer to do everything from buying groceries to watching a movie.

For Raucci growing up, those businesses created a real sense of community. He recalled a time when he and his friends watched the hot dogs turn on the grill in the original Station Street Hot Dog & Sandwich Shop. He was unable to afford one.

“They were all burnt,” Mainiero chimed in with a chuckle.

Mainiero is worried that new development could replace what was already in the neighborhood.

While talking with a PublicSource reporter in Larimer, he discovered that his former church and school, Our Lady Help of Christians, was already partially demolished. The church closed in 2007, and Mainiero didn’t know it was being demolished until he saw it in progress in October. 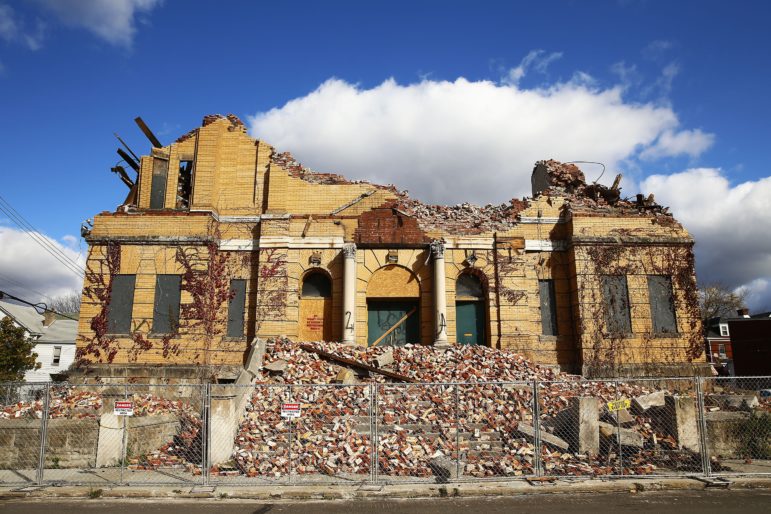 The former Our Lady Help of Christians partially demolished on Nov. 8, 2019, in the Larimer neighborhood of Pittsburgh. (Photo by Jared Wickerham/Pittsburgh City Paper)

He and Raucci are skeptical that the new development will do much to attract new people to Larimer.

Despite this, one unifying sentiment from the Larimer community is that they’re not leaving the place they call home. Many residents hope that development will draw a younger, more diverse crowd and ensure a steady future for the neighborhood.

This sentiment was palpable at the Oct. 10 ribbon-cutting for Phase II of Cornerstone Village. The second phase includes 150 mixed-income units in 12 buildings. The final of four phases is set to be completed in 2021, according to the Urban Redevelopment Authority.

At the ribbon-cutting, speakers celebrated the project’s success while reminding attendees of the work that remains. They also celebrated the significant role that the community played in making the project a success.

In his speech, Pittsburgh Mayor Bill Peduto spoke of his long-standing relationship with the neighborhood, dating back to his work as a city councilman representing East Liberty.

“I remember sitting in that little church with Ora Lee Carroll and her having this vision that was put together by her neighbors, and her saying, ‘This is what’s going to happen,’” Peduto said then looked to the sky. “Well, Ora Lee, it’s happened.”

Remy Davison is a PublicSource intern. He can be reached at remy@publicsource.org.