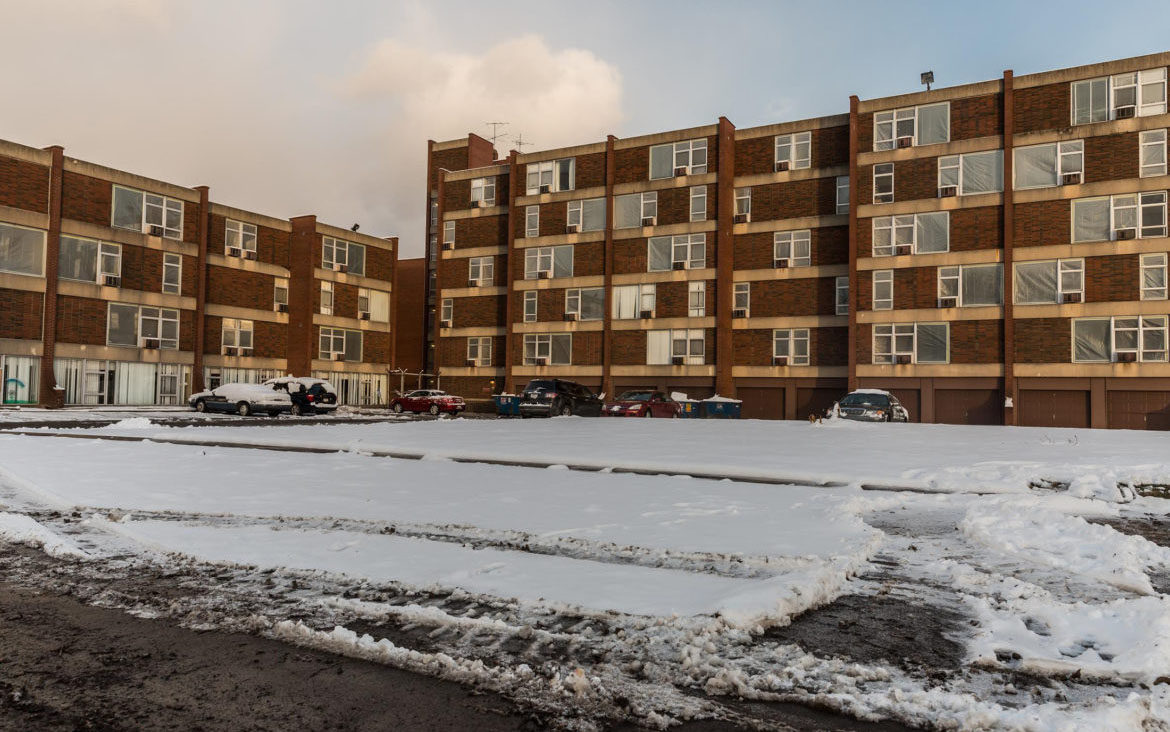 The displacement of more than 200 residents from Penn Plaza apartment complex in East Liberty was neither Pittsburgh's first mass displacement nor its most catastrophic. Forced relocations of this kind date back to the 1950s, when about 8,000 were removed from the Lower Hill to make way for what later became the Civic Arena.

The Penn Plaza displacement has come to symbolize gentrification in Pittsburgh and has captured the public's attention unlike any in recent memory.

As it stands, the proposed redevelopment of Penn Plaza would include two separate, multistory buildings that would feature ground-level retail and upper-floor office space. The Penn Plaza owners do not plan to build housing on the site and are compelled to direct about $3 million into a fund that would support improvements to the nearby Enright Park and help to create affordable housing within 1 mile of the site.

The second and final community meeting on what will come of the Penn Plaza property will be held at 6 p.m. April 16 at the Eastminster Church, 250 N. Highland Ave. On a date yet to be set, the city’s Planning Commission will hear a presentation by the property owners on its new proposal; that meeting will also be open to public comment.

PublicSource is breaking down some of key moments since the Penn Plaza saga began a nearly three years ago.

July 2015: The evacuation from Penn Plaza began with 90-day eviction notices issued by the buildings' owners, LG Realty Advisors. The City of Pittsburgh's ensuing intervention led to a memorandum of understanding between various parties, that, among other conditions, allowed more time for residents to move out.

March 31, 2017: All tenants were relocated by this time, some as far as 10 miles away. Around that time, multiple lawsuits were filed between the City of Pittsburgh and LG Realty Advisors, including an appeal of the city Planning Commission's rejection of a preliminary redevelopment plan submitted by Pennley Park South (PPS), an affiliate of LG Realty. That plan showed a Whole Foods grocery store, office space and apartments. In the commission’s 8-0 vote to oppose the plan, commissioners rebuked the developer for failing to properly engage the community that would be impacted by their development. Whole Foods, the anchor tenant for the proposed development, withdrew from the project soon after.

Summer 2017: All of the legal challenges were negotiated through a mediation process that excluded former Penn Plaza residents. Allegheny County Court of Common Pleas Judge Joseph James also issued a gag order on the proceedings.

October 2017: A resolution emerged in the form of a consent order, which established new guidelines for the redevelopment.

Because the land on which Penn Plaza stood is within the bounds of the East Liberty Transit Revitalization Investment District, the developer can use revenues from associated tax breaks for the redevelopment. The consent order reflected Pennley Park South's agreement to direct 50 percent of the funds, estimated at about $3 million, into separate accounts for affordable housing and park improvements.

The order also called for a public engagement process, which has amounted to two public meetings prior to another review by the Planning Commission and other city agencies.

March 21, 2018: The first public meeting took place at the Eastminster Church in East Liberty. With about 200 people in attendance, members of the Penn Plaza Support and Action Coalition, along with displaced residents, staged a walk-in moments before the meeting began. Protesters gathered around former resident Randall Taylor, who claimed the microphone to make an opening statement. "You will not destroy another home. You will not destroy another business. You will not displace another person," Taylor said.

A project overview was presented by Neville Fernandes, an architect with MV+A Architects based in Washington, D.C. Corey Layman, the city's zoning administrator; Ray Gastil, the city’s planning director; and Rev. Ricky Burgess, District 9 city Councilman, were among those in attendance.

Jonathan Kamin, the attorney who represents the owners, responded to questions and said that the developer’s tax contribution would support the creation of 251 replacement units of affordable housing within one mile of the Penn Plaza site.

Nearly two dozen members of the audience spoke during a public comment period. They demanded affordable housing at the site and raised concerns about inadequate notification for the meeting, increased transit hardships and the exclusion of displaced residents in the decision-making process. Helen Gerhardt, an appointee to the Pittsburgh Commission on Human Relations and chair of the City-County Fair Housing Task Force, said the Penn Plaza situation is about more than the developer. “It’s about years of decisions” by our local government, she said. “We need to hold them accountable. Hold me accountable...Millions of dollars of public subsidy that have gone into developments like this, and no affordable housing.”

Moving forward: The public is invited to an April 16 community meeting to discuss and ask questions about the redevelopment plans.

The proposed project can only be approved by the city’s planning commission. The commission will evaluate the project's general compliance with zoning and land use requirements. Layman told the crowd at the March 21 meeting that more details about the proposal, like floor plans and building materials, will emerge as the project moves through additional layers of review by the planning department, and public hearings of the planning commission.

One thought on “Key moments in the Penn Plaza displacement saga”