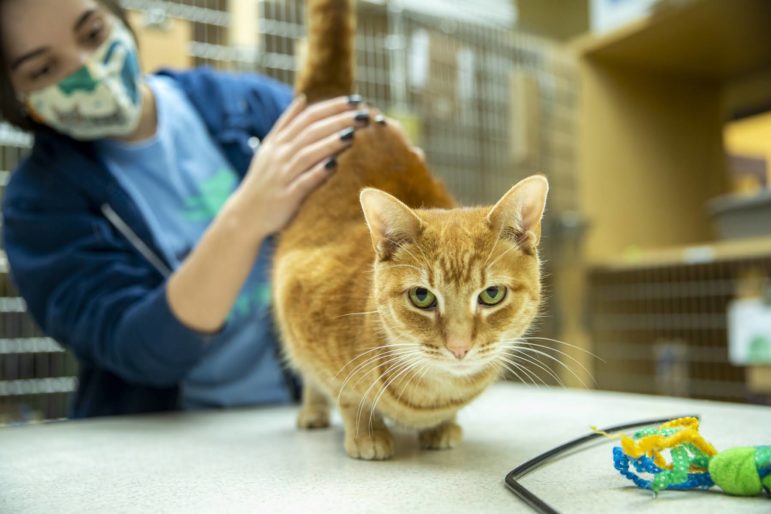 Animals aren’t at a great risk for COVID-19, but the pandemic has upended care at local shelters.

As businesses shuttered in response to the COVID-19 pandemic, a new challenge arose for Pittsburgh’s Animal Friends shelter. With more than 200 cats, dogs and other animals all on-site, Animal Friends couldn’t just shut their doors.

Instead, shelter staff sprung into action. And over the next nine months, the shelter created solutions to continue providing essential care to the animals safely amid the pandemic. Those included partnering with foster homes to house the animals, virtual fundraisers and limiting foot traffic at their campus — among other precautions.

“We limited the number of people in the building and implemented a team schedule among staff,” said Cody Hoellerman, chief community engagement officer at Animal Friends. “We put staff in groups.”

These are just a few of the ways animal shelters across Allegheny County shifted their approach to animal care amid the COVID-19 pandemic. With resources shrinking, they had to schedule appointments virtually, while struggling to find funding during a year when in-person fundraising events were impossible.

Like other shelters in the area, Animal Friends moved some animals to foster homes to make the kennel population safer by decreasing the number of animals — and in turn, staff — from being in the facility. The response from the community willing to foster animals, Hoellerman said, was “overwhelming.”

“It was a blessing,” Hoellerman said. “Half of the animals on-site got moved into a foster home.” 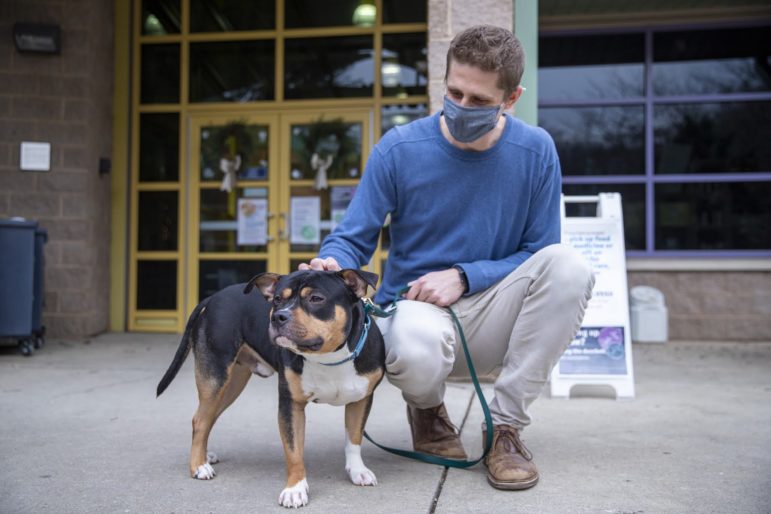 Cody Hoellerman with a dog from Animal Friends shelter. (Photo by Jay Manning/PublicSource)

Currently, there are 187 animals in Animal Friends’ care, according to Hoellerman – 105 of them are on-site, and 82 are in foster homes. Typically, there are over 250 animals in the shelters’ care at any given time.

To keep people safe, Animal Friends has the same COVID-19 restrictions seen in most public settings – hand-washing, sanitizing, maintaining social distance and mask-wearing – but Hoellerman said there are situations that sometimes require people working together in close proximity, like behavioral and medical care with the animals.

Centers for Disease Control and Prevention data notes that there is no evidence that animals are playing a significant role in the spread of COVID-19, and that the risk of animals spreading the virus to people is considered to be low.

“The animals aren’t socially distanced from each other — there’s no risk there,” Hoellerman said. “We took advantage of fosters in our community to reduce the population of animals.”

Hoellerman said that because the animal welfare community is so tight-knit, shelters nationwide have shared different techniques and have collaborated with each other. The team implementation — where staff works with the same cluster of people every shift — came from research and collaboration with other organizations.

When the pandemic began, Animal Friends considered which of their various program offerings could continue — with restrictions — and which ones needed to pause. Hoellerman said Animal Friends is “striving to keep as many programs up,” but not all programs have been back. Its humane education program — where staff goes into schools, and students visit the shelter — and the Therapets program — a certified, animal therapy program — are both on hiatus.

“People need [Therapets] now, but the nature of that work… there are obvious reasons why we can’t coordinate it now,” he said.

From a fundraising standpoint, COVID-19 had a “huge impact” on Animal Friends. As a nonprofit, Animal Friends relies on donations from sponsors. In a “year of virtual events,” Hoellerman said, the organization took traditional in-person fundraising activities, like bingo and a gala, online.

“Fundraising was incredibly challenging,” he said. “We rely on largely attended events. We had to count on the generosity of people.”

For Karen Sable, the deputy chief for the Westmoreland/Allegheny/Fayette County Animal Response Team [CART], the biggest impact of COVID-19 has also been financially.

“We had to cancel our fundraising activities, and find more innovative ways to fundraise,” Sable said. “People were financially affected by COVID, and lots of people were in great need…[it’s] hard to take care of themselves, let alone pets.” 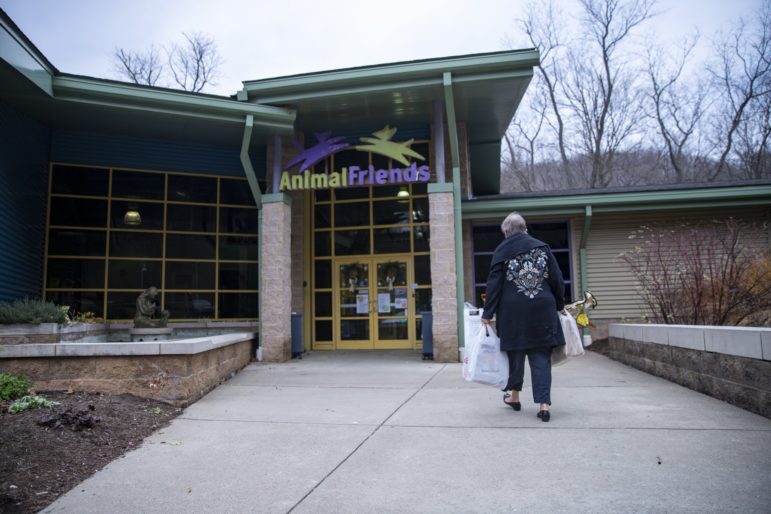 A person dropping off items at Animal Friends shelter. (Photo by Jay Manning/PublicSource)

CART initiated the Pet Pantry — a place where people affected by COVID can receive pet food for both domestic and farm animals. There’s a “lot of demand,” Sable said. People can call CART or message them on Facebook to arrange pickups and deliveries. In addition to pet owners leaving their name, phone number, address, types and number of pets they have, interested people must also explain how the COVID pandemic has financially affected their family.

“I didn’t know what to expect,” Sable said. “There are no massive food distributions, and we have to make sure we are giving food to people with a financial need because of the pandemic. The requests are higher than I anticipated. It definitely exceeded what I thought.”

As of Dec. 11, CART provided Pet Pantry food to 350 dogs, 391 cats and 55 other animals,  including rabbits, goats, chickens, guinea pigs and horses.

Sable said CART was in a better position to create the Pet Pantry because they previously distributed Pet Care Comfort Kits, which included survival supplies for people who have lost everything in a disaster. Additionally, they received some funding from the state animal response team.

“Ideally, we meet someone in a public spot, but we make a number of deliveries if necessary,” Sable said. “I never thought COVID would be this big or last this long.”

CART is limited in the amount of activities they can engage in during the pandemic, Sable said. Typically, CART is training members, holding fundraisers and providing educational opportunities, such as teaching people about how to handle emergencies with their animals.

Generally, CART staff would trap, neuter and return stray animals outside. When COVID-19 hit, however, Sable said most free clinics stopped operating and only conducted emergency procedures, leading to a “pretty large explosion of homeless cats and kittens.”

“That normally wouldn’t happen because folks could get them spayed and neutered earlier in the year,” she said. “Most situations of homeless cats are managed – cats have a caretaker. That obviously didn’t happen; folks couldn’t trap or were uncomfortable doing so.” 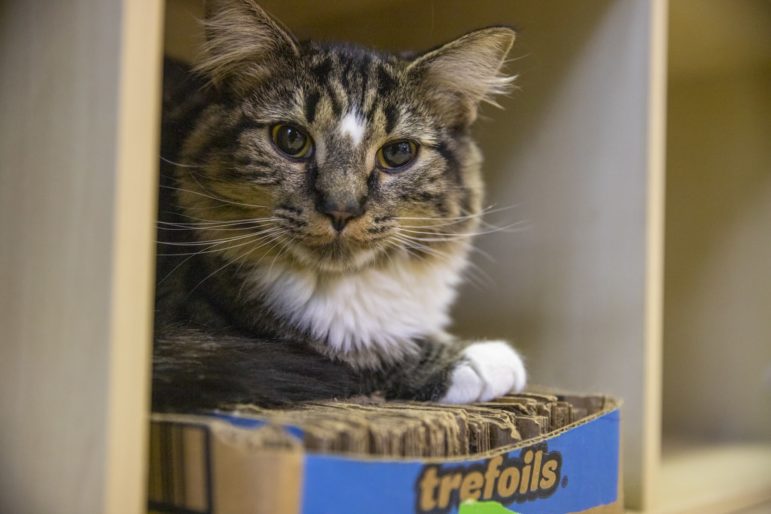 A cat at Animal Friends shelter in Pittsburgh. (Photo by Jay Manning/PublicSource)

Because adult feral cats can not be adopted, the euthanization rate for all cats rises with a rise in the homeless cat population.

While Sable said she can’t predict the long-term effects that COVID-19 has regarding animals, she said she thinks there may be an increase of people that cannot care for their pets financially, which can lead to people abandoning them.

Debbie Urmann, a volunteer humane society police officer affiliated with Frankie’s Friends Rescue in New Kensington, serves both Westmoreland and Butler counties. She also thinks there will be an increase in abandonments, but she said she hasn’t seen a spike in the counties she serves – yet.

“If people continue to struggle financially, shelters could become overwhelmed … [it’s a] very good possibility,” Urmann said. “That would be nationwide.”

And with animal welfare organizations already struggling financially, they may be hard-pressed to meet an increasing demand.

“The less funds you have, the less animals you can help,” Urmann said. “Nonprofits are based on donations. So many organizations had to cancel fundraisers, which hurt organizations, which in turn hurt the number of animals we can help.

“We are helping animals as best we can, given the circumstances.”

Kellen Stepler is an intern for PublicSource. He can be reached at kellen@publicsource.org.