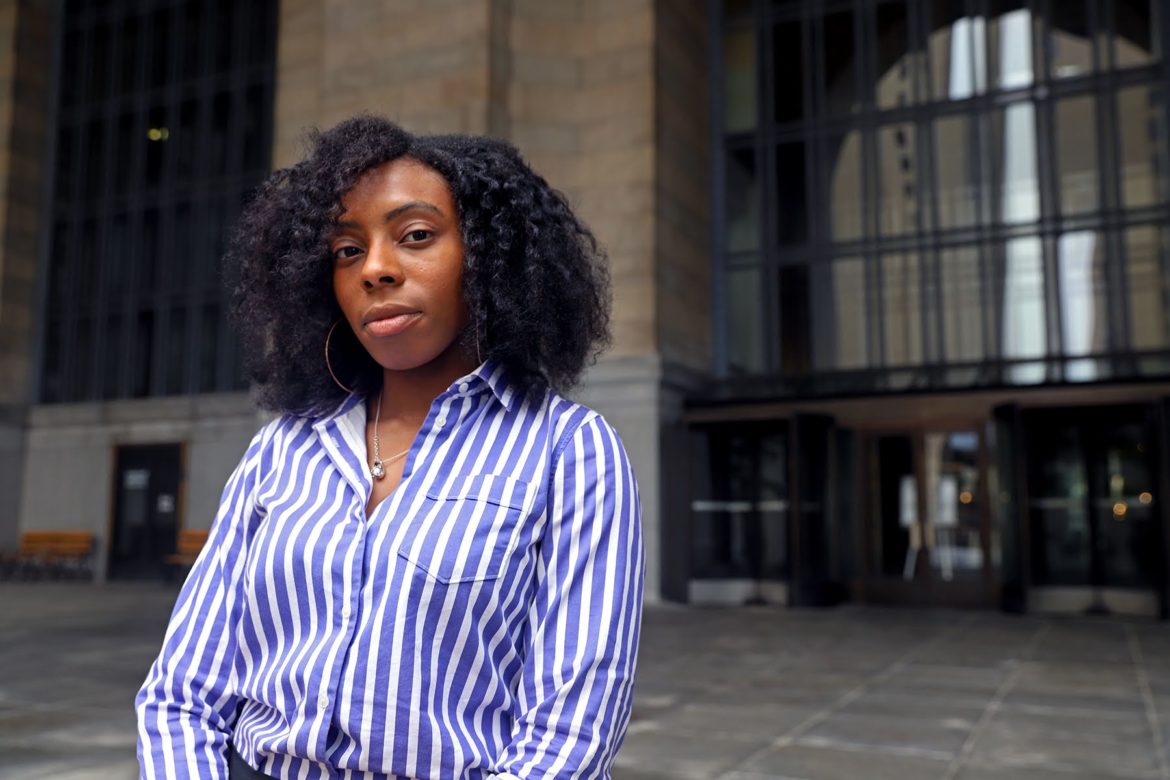 Lindsay Powell, a member of the Urban Redevelopment Authority board and key city hall staffer. (Photo by Jay Manning/PublicSource0

It will take more than a mayor and a county executive to get the Pittsburgh region’s economy off the floor.

It will take the work of 99 people on 16 development-related boards and commissions, and among them is 29-year-old Brooklyn native Lindsay Powell.

"This pandemic is obviously incredibly frightening,” said Powell, now a Bloomfield resident and member of the Urban Redevelopment Authority board. “But I think it also presents government with a chance to be more innovative as we move forward with rebuilding."

Her seat on the URA’s five-member governing panel is one of 102 posts on 16 boards and commissions that PublicSource has examined in recent months. (Three of the people hold two seats on development boards.) All of the boards have important roles in the region’s economy.

In coming months, PublicSource will add to the new Board Explorer interface, allowing you to get to know hundreds more people in the region’s power structure, responsible for governing everything from building heights and arts funding to air quality enforcement and jail inmate services.

In some ways, the development power structure is diverse. The City of Pittsburgh’s development boards include more women than men and skew slightly less white than the city as a whole. Allegheny County and joint county/city development boards, meanwhile, skew male but are racially roughly as diverse as the county population as a whole.

"We have both a county executive and a mayor who are committed to diversity, who have made it a centerpiece of their administrations," said Rev. Ricky Burgess, a member of the boards of the Housing Authority of the City of Pittsburgh and the Southwestern Pennsylvania Commission, as well as Pittsburgh City Council. "They did not inherit this level of diversity. They made it a priority."

In partisan and generational terms, development power is much less equitably shared.

Millennials remain scarce. Only 11 of the 99 board members were born after Ronald Reagan was inaugurated president in 1981. By comparison, 26 were born before Dwight Eisenhower became commander-in-chief in 1953.

A diversity of ideology and background "matters a lot," said Don Smith, a registered Republican who sits on the Redevelopment Authority of Allegheny County [RAAC], and also leads the Regional Industrial Development Corp. "I think it's important to have the different points of view in the room so you hear alternatives. ... We all want to see the economy grow and we want to see good quality development happen."

Three of the board members — each of whom epitomizes an aspect of the development structure — detailed their backgrounds, and their thoughts on the challenges to come, for PublicSource. 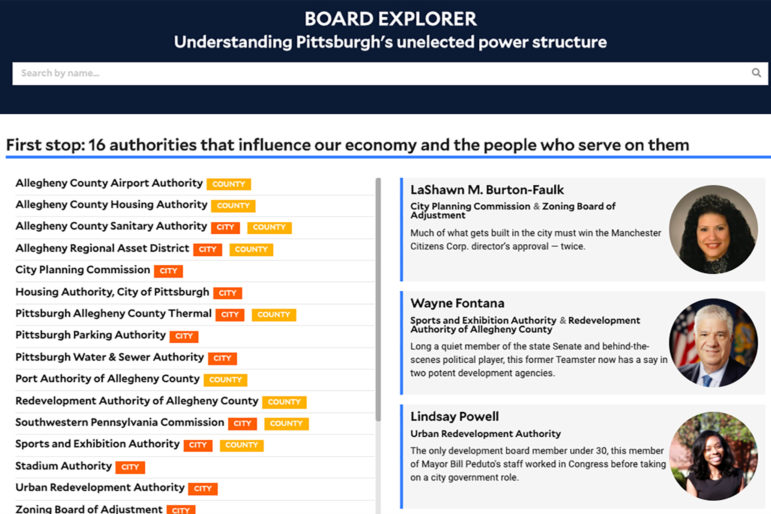 The lone 20-something brings Brooklyn-via-Beltway perspective

Powell grew up four blocks from what is now New York’s Barclays Center, the eight-year-old arena that hosts Nets basketball and Islanders hockey. The development epitomized the tug of war between residents and commercial interests vying to plot Brooklyn’s future.

"It had affected my neighborhood, my community, my parents even,” Powell said of the Barclays development, which featured displacement of residents and the use of eminent domain and drove property taxes so high she said her family had to move. Resident groups, she recounted, “tried to push in more community benefits agreements, how can we increase the number of jobs, what is this going to do to the small businesses and homeowners in our area?"

Her family dinner table conversation was good preparation for her service today in a city that has seen community benefits fights in neighborhoods including the Hill District and Uptown. She took a winding course, though, from the shadows of Barclays to a role as assistant chief of staff in Mayor Bill Peduto’s administration and URA board member. After studying sociology and politics at Massachusetts’ Wheaton College, and then public policy at Carnegie Mellon University, Powell spent three years in Washington, D.C., working fellowships and staff jobs in the State Department, the Executive Office of the President and Congress. 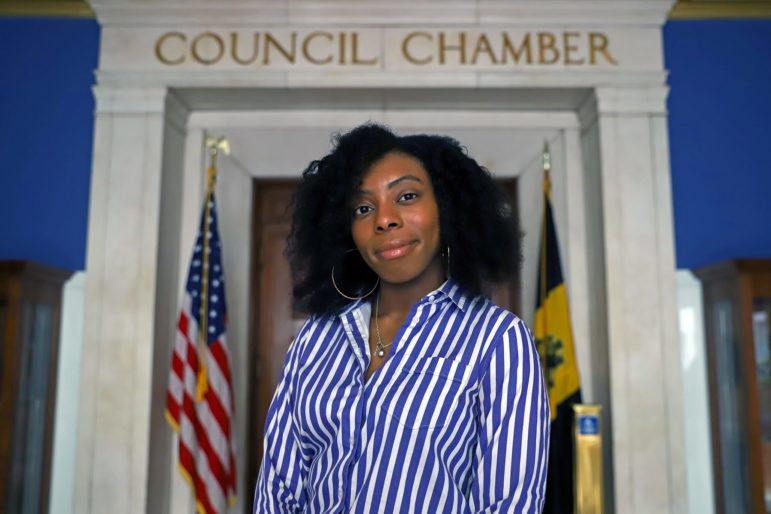 Lindsay Powell grew up in Brooklyn, blocks from the site now occupied by the Barclay's Center. (Photo by Jay Manning/PublicSource)

She said she “learned so much” within the Beltway but found it “incredibly frustrating” to hear, time and again, that a policy idea “makes sense, but we can't do anything until these pieces move, until that person gets elevated, or whatever.” She yearned for the tangible results of local government.

"Pittsburgh is the kind of place in which problems seem solvable,” she said. “I came back to Pittsburgh from D.C. with no job. I didn't have anything lined up.” She networked and, in 2017, landed a job as a policy analyst with the mayor’s office, rising to assistant chief of staff in 2018. Last year Mr. Peduto appointed her to the five-member URA board.

Not only does Powell deliberate and vote on aid to many of the region’s biggest development projects; she is also the liaison between the URA and the mayor’s office at a time of massive changes and challenges for the city’s development agency.

Powell is also the only person under age 30 among the 99 on the city and county development-related boards. She said that her generation is not only underrepresented on the boards and other leadership roles but also at community meetings about development. The region's development decisions could benefit from "having that direct input from folks that are not yet starting families, aren't yet buying houses,” she said.

The pandemic-driven adoption of remote, web-based meetings may make them more accessible to younger people, but Powell worried that in the long-term, an online-only approach could leave out less tech-savvy residents. "We can all talk about city planning in our pajamas,” she said. “How do we make sure we’re not missing those critical voices again?"

When she agreed to join the URA board, she couldn't have imagined that she'd be wrestling with the effects of a pandemic which, she noted, has laid bare the fragility of many of society's systems. "I'm just hoping that we as a region are able to use this as an opportunity to address issues that are most critical to our most vulnerable residents."

He wears many hats — but wonders where he’ll find cash

Put Wayne Fontana, 70, on a board, and you get a host of experiences and connections in one plain-speaking package.

Asked if the partisan lean of the development boards is a problem, the Democratic state senator said, “I think it’s pretty much OK.” While he’s happy to collaborate with the likes of Don Smith, he said, “If I get a stone-cold conservative, it’s not working. Then all you have is people throwing bombs. … It’s so partisan today, it makes you want to throw up, quite frankly.”

Fontana, of Brookline, has been a Teamster, boilermaker, Realtor and Allegheny Council member. He sits on the boards of the Redevelopment Authority of Allegheny County and the Sports and Exhibition Authority [SEA] — not to mention the very-slow-to-start Pittsburgh Land Bank (which will be added to the Board Explorer in the future).

That makes for a lot of meetings. “I get into it. I enjoy it,” Fontana said, adding that County Executive Rich Fitzgerald once told him, “‘I can’t put you on every board.’” 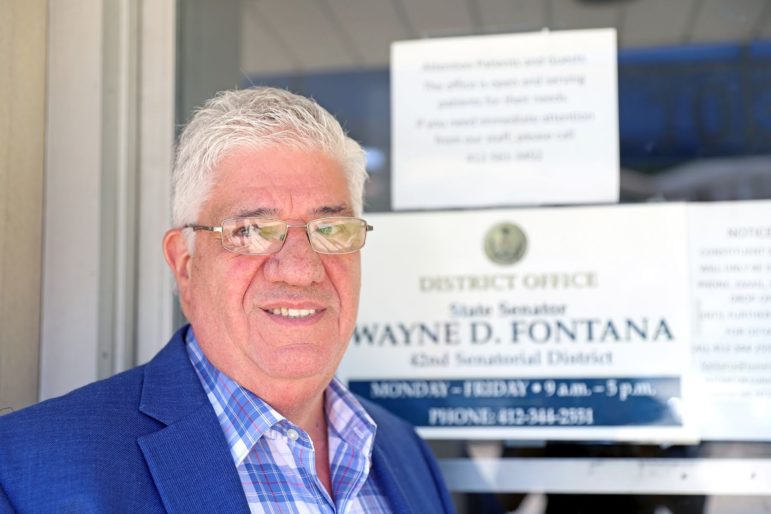 State Sen. Wayne Fontana sits on the boards of the Sports and Exhibition Authority and the Redevelopment Authority of Allegheny County. Here he stands in front of his district office, in Brookline. (Photo by Jay Manning/PublicSource)

Fontana said that being ubiquitous enables him to identify potential state funding for projects like the contentious Lower Hill District development spearheaded by the Penguins and overseen by the SEA and URA, and for developments that come for funding to RAAC. “Maybe that’s why they put me on there,” he mused.

His roles may not be as enjoyable during the anticipated coming cash crunch.

“There’ll be enormous funding needs going forward,” he said. The SEA-owned David L. Lawrence Convention Center and related parking garages have expenses, but virtually no revenue coming in, he said. State development funding may dry up amid tight budgets.

Even if there is public money available, public agencies may need to look more carefully at the proposals placed before them. "Is the project still going to be viable, profitable, for the developer, going forward?” he asked. Proposals that are heavy on retail and hospitality elements “may have to go on hold or go in a different direction. … You’ll see, some of those projects might get scaled back.”

She weighs the clear-cut, and then gets the warm and fuzzy

Many city development proposals have to go through both the Zoning Board of Adjustment and the City Planning Commission, and there's just one person — LaShawn Burton-Faulk — who gets two votes. That’s because she sits on both panels.

"It is a wonderful opportunity to be able to sit on both sides of a project," she said. 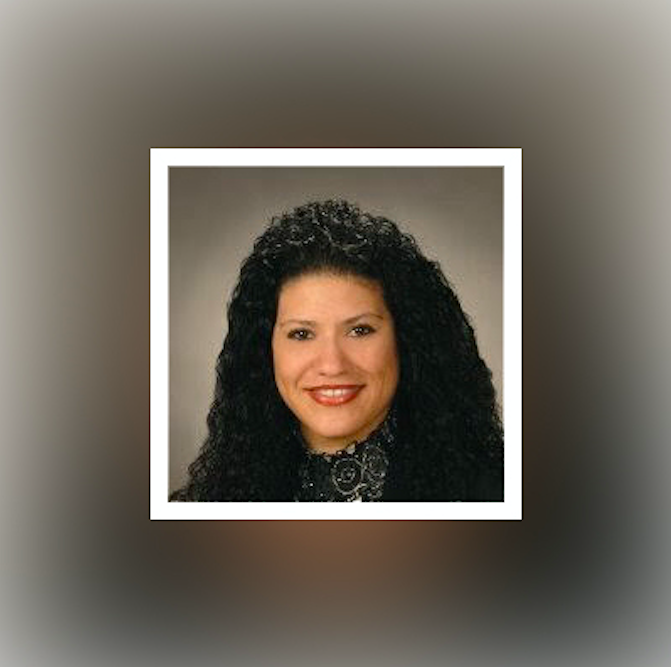 LaShawn Burton-Faulk sits on both the City Planning Commission and the Zoning Board of Adjustment. (Courtesy photo)

Zoning decisions are usually "clear-cut," she said. "You're able to do something, or you're not able to do something," according to a code that divides the city into zones in which different uses and types of construction may be permitted by right, under certain conditions or with variances. "There's little room for what I call the warm and fuzzy."

At the planning commission, she added, "you really get an opportunity to feel a project. ... You really get to understand the neighborhood impact. ... Is it a positive? Is it a negative?"

Sometimes her planning colleagues will ask how the zoning board reached its conclusions on a given proposal. "While I may answer some questions, whatever the decision was for zoning, it's not as if [planning] will make the same decision," she said.

Both the zoning board and the planning commission put their public meetings on hold since mid-March, and plan to resume via the Internet in June. She expects that as activity resumes, pent-up demand for development decisions will make for busy meetings, "and it will be a very welcome activity and workload, because we want to get back to business."

Will that business look much like it did before the pandemic?

"We are in the most unprecedented time that we've ever been in, in my lifetime, your lifetime," Burton-Faulk, 49, said. "I don't know exactly what it looks like across industries, what things are going to look like.” But she’s optimistic. “We're Pittsburgh tough, and no matter what, we're going to figure out ways."