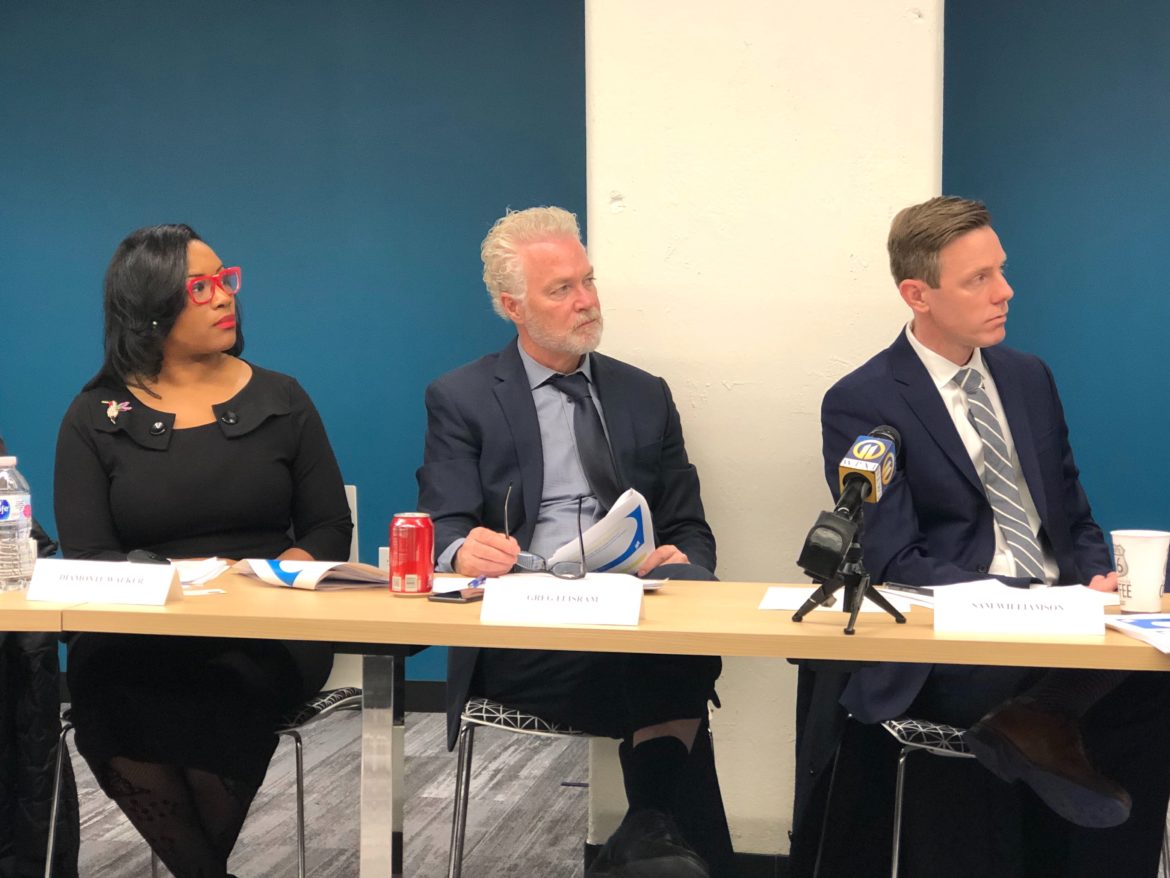 The Urban Redevelopment Authority [URA] has to become more focused, better connected to potential partners and more resourceful, according to a report set to be released today and obtained by PublicSource through a Right-to-Know request. The URA has already launched an internal reorganization driven by the report, started tapping new funding sources — and it may soon begin looking for a new nickname.

The 262-page report, written before the pandemic’s onset by New York-based HR&A Advisors, and funded by foundations, suggests a new URA priority list:

Mayor Bill Peduto said he agrees "100%" with the report’s priority list. However, he said the city can’t single-handedly bolster the URA’s $14 million operating budget in the face of what he called an "economic depression," and he isn’t planning to return to the days when the city funded half of the URA’s operations.

"I can’t see how we could, given the fact that [city] revenue is going to be significantly reduced, and our expenses are going to go up" due to the coronavirus pandemic, the mayor said in an interview on Monday. "I don’t look at the city as being the cash cow for the URA, and in fact, over the course of the next few years, the responsibility of the economic development leadership team is to make the organization completely self-sufficient."

URA Executive Director Greg Flisram, who started the position in January, said this week that the agency "will be looking to become more self-sustaining" — but maybe not right away. "I think what we’re going to find in the immediate future, in the aftermath of COVID, is that we’re just going to need more resources of all types to do this work that we have to do."

The report’s mandates will compete for attention with scores of small businesses clamoring for emergency loans, and with residents seeking help to keep their homes.

"Economic development in the city of Pittsburgh was already a huge undertaking. COVID-19 just sort of intensifies that,” said Diamonte Walker, the URA’s deputy executive director, who added that she was "pretty inspired by the report."

Longtime Pittsburghers in some neighborhoods may associate the URA with big "renewal" projects that displaced families from neighborhoods like the Hill District, East Liberty and Allegheny Center, or with the rebirth of former mill sites into SouthSide Works and the Pittsburgh Technology Center, or with efforts to revitalize Main Streets. Followers of recent news might recall efforts to fund affordable housing, put vacant property into entrepreneurs’ hands, or dish out loans and grants to those affected by the coronavirus shutdown.

In February 2019, the city, the authority and four philanthropies — The Pittsburgh Foundation, The Heinz Endowments, Hillman Family Foundations and Richard King Mellon Foundation* — agreed to hire HR&A to evaluate the authority. The consulting firm pored over documents, surveyed the URA's staff and community contacts, conducted 70 interviews, compared the authority with nine similar agencies, and then suggested "several key reforms" needed "to advance progress towards a more prosperous and equitable Pittsburgh." 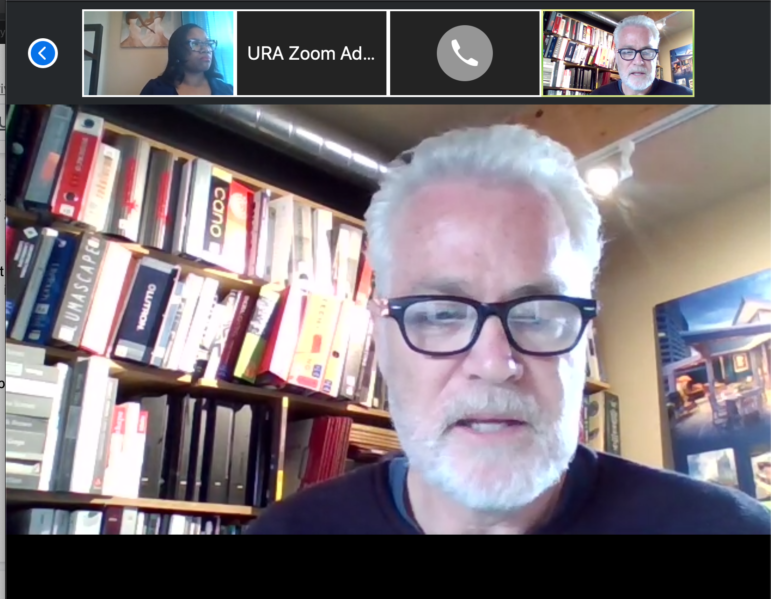 Greg Flisram, executive director of Pittsburgh's Urban Redevelopment Authority, talks about the URA's ongoing transformation and response to the coronavirus crisis, via Zoom, on April 13, 2020.

Flisram said the biggest change will be a "focus more on people than projects." The report, he said, suggests "a more full turn away from the large master redevelopment projects, and [to] focus more intently or deliberately, if you will, to do more neighborhood improvement, neighborhood investment, more micro-scale investment that will hopefully lead to bigger, catalytic projects down the road."

That shift away from splashy projects like SouthSide Works doesn’t shock William Gatti, president and CEO of Trek Development, which has received URA aid for new housing in the Hill District and Central Northside. "I don’t see the URA going forward and continuing to be a significant funder" of big developments, he said. "Their resources have been whittled down over the years."

The URA used to tap the city for the bulk of its operating budget. (That budget doesn’t include the tens of millions of dollars in state funds that the URA steers to local developments.) According to the HR&A report, the city — using local funds and federal grants — covered 55% of the authority's operating budget in 1994, but just 31% in 2018. By 2019, the URA’s operating budget was relying more on fees it charges for services to developers and others ($5.3 million) than on city and federal funds ($2.5 million), per the report.

Peduto said the trend of decreasing reliance on the city will have to continue. "This is one of the only organizations that is not self-sufficient, that it relies on city government to fund it, and the URA needs to use equity — namely its property — as a means to become self-sufficient," he said.

The URA owns around 1,600 parcels of real estate. It’s often asked to take charge of property owned by the city, which holds around 12,600 parcels, according to Allegheny County records. The HR&A report suggests the URA could shore up its budget by leasing land, and entering into joint ventures to develop property. Peduto wants to expand on a pilot program in which the URA is working with six current or would-be small business owners to redevelop 55 parcels along Centre Avenue in the Hill District.

Flisram — who left Kansas City’s top economic development job to join the URA — said the authority is reorganizing its 93-employee structure to improve efficiency and control costs. He argued that in the midst of an "economic as well as public health disaster," it’s the wrong time to cut the authority’s resources.

"The small business and main street development stuff," he said, "may need to be pumped way up because of what’s happened." In fact, he said, the URA’s COVID-19 Small Business Emergency Loan Fund has around $500,000 more in requests than it has money to lend, prompting him to put "a few lines in the water" with foundations and federal agencies.

"Our mission is to do the projects that the private market inherently won’t touch, won’t do," he added. "These are projects that have higher risk, bigger gaps and sometimes it’s very hard to do those projects and be quote-unquote profitable at the same time."

This month, the URA announced a $200,000 donation from Citizens Bank to its emergency loan fund. With more loan applications than it can meet, the URA could use more friends in the corporate world. The HR&A report, though, calls the authority’s connections to outside organizations, including the Allegheny Conference on Community Development business roundtable, "limited."

"The URA was a siloed organization," confirmed Walker, who joined the authority in 2017. "[I]t’s not that anybody was intentionally not trying to be strategic or not trying to partner," she said, but employees were "putting their heads down and getting the work done, and they were forgetting to come up for air" to engage with others. 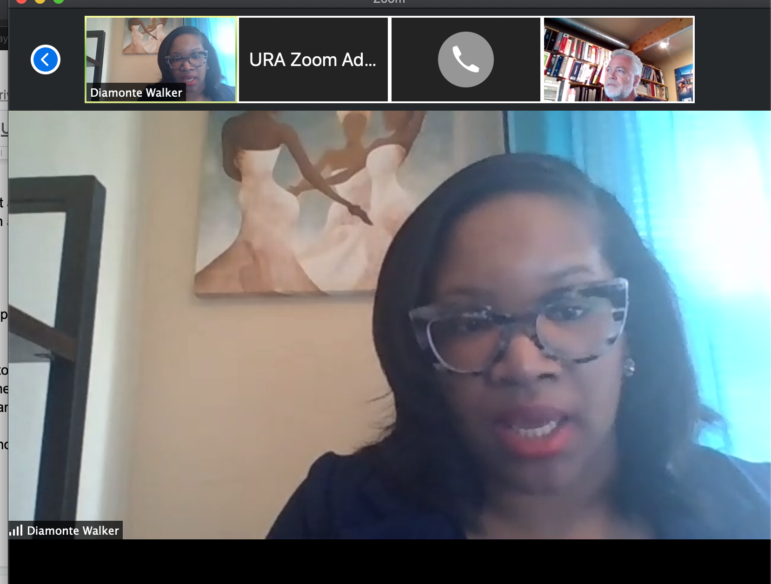 Diamonte Walker, deputy executive director of Pittsburgh's Urban Redevelopment Authority, talks about the URA's history of being "siloed," and its efforts to build bridges to other organizations, via Zoom, on April 13, 2020.

Flisram said he’s been talking with the Allegheny Conference and Pittsburgh Regional Alliance about "long-term economic recovery efforts that we need to stand up to be able to reassert the economy here."

Walker said she has joined the boards of Neighborhood Allies and Innovate PGH, and that the URA is beginning to invite natural allies on to its advisory panels.

The URA should reposition itself in part by calling itself something else, HR&A suggests.

"Both ‘redevelopment’ and ‘authority’ conjure up images of mid-century bulldozer renewal, hardly appropriate for an agency focused on equitable economic opportunity," according to the report.

Flisram said his agency's name "has an aged, somewhat authoritarian ring to it," but that the agency nonetheless seems to be widely admired. Walker noted the name's "negative connotation" in neighborhoods like the Hill District, where she lives, and said a new name could "maybe cast a new vision and a new path forward." Peduto said he wants a new moniker, though the official name — set in state law — would likely remain.

The thought of studying the URA’s name while neighborhood economies are in tatters seemed "like a waste of really good time and money," to Christina Howell, executive director of the Bloomfield Development Corp., which works with the URA’s small business development team. "I could care less about the name as long as they’re doing their job."

Though the report was written before the pandemic-driven economic crisis, its recommended course correction is still "going to be necessary," said Peduto. "[T]hose that will be hurt the most through this economic depression will be those that are most vulnerable," including small businesses and people whose loss of income may jeopardize their housing, he said, compelling the URA to "refocus resources ... immediately."

The URA plans to put the HR&A report online and invite public comment. This week, community groups and developers told of the report were quick to make their suggestions.

The URA should do more "educating small businesses," in addition to lending them money, said Donna Jackson, chair of the Larimer Consensus Group, which has worked with the URA on large- and small-scale revitalization projects.

"In my opinion, it’s jobs and people," said Todd Reidbord, president of Walnut Capital, which worked with the URA on infrastructure supporting Bakery Square in Larimer. "We need twice as many people in the city, and we need the jobs to support twice as many people in the city," he said. Focusing on anything except jobs and population, he continued, is "putting your head in the sand."

The debate, and the report, couldn’t come at a more interesting time.

"I think we’re at a really crucial crossroads right now in terms of where we take the agency and how we can add value to the city," Flisram said. The coronavirus crisis could "change a lot in terms of what it means to be a resident of the city. It’s going to challenge urbanism in multiple ways, in terms of people’s willingness to convene in groups, use public transit, live in high density — I mean, these are all things that really, city living is about."

*The foundations that paid for the HR&A report are also contributors to PublicSource.