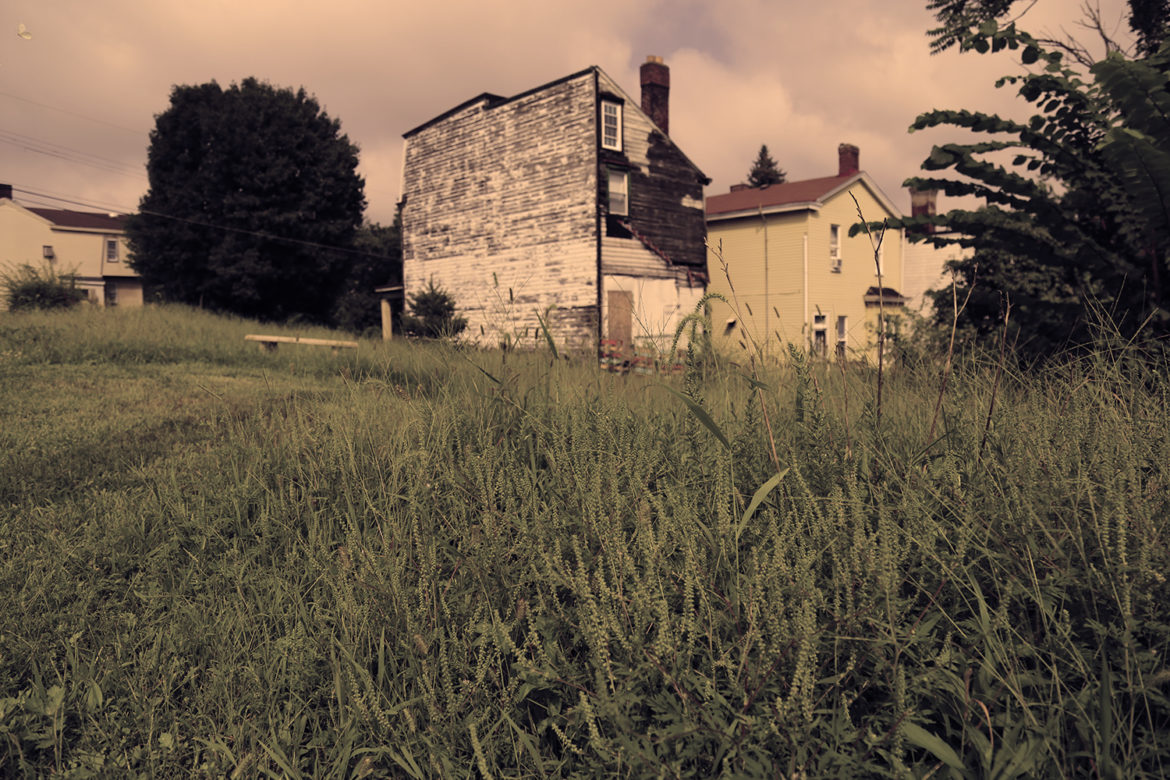 Editor's note: This is the final installment of PublicSource’s series examining approaches to treat symptoms of blight in Allegheny County. Be sure to read the our previous stories on the city’s 27,000 vacant lots and the people who are saving the Pittsburgh region’s historic homes from demolition.

Six Garfield residents pore over neighborhood maps inside a cramped office. They’re debating what properties and lots they could claim to expand a community park.

They are members of the Bloomfield-Garfield Corporation [BGC], and the properties they want to acquire are either tax-delinquent or vacant lots surrounding Fort Pitt Playground.

With an expanded “Garfield Park,” the community can reclaim forgotten homes and lots and put them to productive use, all while returning them to the tax roll.

But to them, the lengthy proceeding of court-ordered property auctions has been stalling real progress in such community development projects. Garbage is piling up on a Rosetta Street property in Garfield. The Bloomfield-Garfield Corporation wants to acquire this property to expand a community park. (Photo by Connor Mulvaney/PublicSource)

Some of the lots are city-owned and require city-council approval if the organization wants to acquire them; some are owned by the Urban Redevelopment Authority, which will hold these properties for possible development; and some are in the inventory of the Housing Authority of the City of Pittsburgh.

Several of the properties BGC wants to buy along North Mathilda Street and Rosetta Street need to go to a treasurer’s sale, though, and a functional land bank could facilitate BGC’s property acquisition process.

Think of the land bank as a machine — it acquires vacant, tax-delinquent properties through donation, transfer, foreclosure or purchase and rehabilitates them until they are fit for resale or repurposing.

It can hold onto properties, or “bank” them without paying taxes and can manage redevelopment projects. It also gets first priority in a judicial sale, whereas currently, anyone can bid on a property.

The properties BGC hopes to acquire are a small collection of the 30,238 vacant or distressed parcels within city limits, properties that may be returned to the tax roll much more quickly with a functioning land bank in place.

“[It’s] seemingly never going to get out of the gate,” Swartz said of the bank, which he believes has been delayed by city council politics.

When will the city’s land bank be “truly operational?”

In October, it will have been two and a half years since the city passed legislation to create its own land bank.

According to Swartz, there hasn’t been much progress in setting up solid policies or procedures under which a Pittsburgh land bank would operate.

He feels the land bank’s board has inexperienced members who may keep the land bank from becoming “truly operational.”

Kevin Acklin, chief of staff for Mayor Bill Peduto, paints a different picture. Acklin told PublicSource the city land bank is, in fact, operational — it has all the parts it needs to acquire properties, like a board and legal counsel — but it is not yet functioning due to funding issues and some planning that is still in the works.

Still, he said he believes that by early next year the city land bank will be ready. The Bloomfield-Garfield Corporation would like to include this land on Shamrock Way into its community park expansion. Members of the group say the lengthy court-ordered property auctions have been stalling their project. (Photo by Connor Mulvaney/PublicSource)

In 2014, the land bank board’s current chair, Councilman Ricky Burgess, was its greatest opponent. At one point, Burgess requested that his city council district, District 9, be exempt from the land bank ordinance.

According to Burgess, the district’s neighborhoods would be disproportionately affected by the land bank due to high levels of vacancy and tax-delinquency in some regions, like Homewood.

Since then, the board has made adjustments to the land bank bill — such as community participation amendment provisions, which will allow the three most-affected districts to have community members sit on the land bank board.

Acklin conceded this may have been part of the reason Burgess went from opponent to chair, but maintained that it was not a “magical change of view,” rather it was a result of the board’s negotiations.

“Those who go to the board meetings say there isn’t any discernible forward motion,” he said.

Not a “short-term endeavor”

In Pennsylvania, cities, counties and conglomerates of smaller municipalities with populations of 10,000 or more may establish land banks. So far, 12 have been incorporated in the state.

Where real estate markets are failing, the land bank steps in and acquires the properties no one wants, clearing tax liens and delinquent property taxes.

An Lewis, executive director of the Steel Rivers Council of Governments, considers the land bank to be a “responsible buyer.” This vacant lot on Climax Street in Beltzhoover is among Pittsburgh's 30,238 vacant or distressed parcels. (Photo by Natasha Khan/PublicSource)

After years of networking with local municipality leaders, the Allegheny County Council gave Lewis and her cohorts the blessing to create the Tri-COG land bank last June. The land bank’s influence may stretch as far north as Braddock Hills and as far south as West Newton.

This bank still needs legal agreements between each municipality, the county and the local school district for the area to be included.

In the next year, Lewis thinks the land bank should be operational, but there will be plenty of work going forward.

“Land banking is not a short-term endeavor,” said Lewis.

“I see this as a very murky picture.”

Swartz said he thinks the city’s land bank board may want to adopt some of the Tri-COG land bank’s habits. Posting transparent business plans and an executive summary could be a good start. Still, neither land bank is really functioning — despite four years lapsing since a state law made them possible.

In Garfield, Swartz is adamant that transparency, detailed plans and firm deadlines are the key to progress on a city land bank. The longer the land bank stalls, the longer projects like BGC’s park remain a group of vacant lots and tax-delinquent homes.

“The next steps don’t have timetables attached to them,” said Swartz.

“I see this as a very murky picture,” he added.