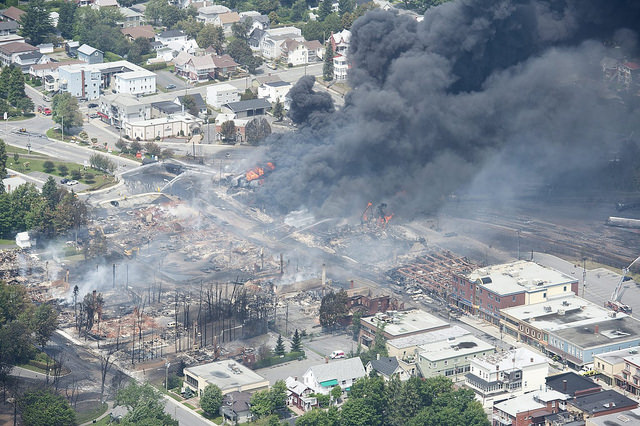 A renowned railroad expert said in a report released Monday that trains carrying crude oil should slow down to 35 mph through big cities and that more inspections are needed to reduce the risk of a crash in Pennsylvania.

The governor’s report includes 27 recommendations from Allan Zarembski, a professor of railroad engineering and safety at the University of Delaware, who Gov. Tom Wolf hired to assess the risks of trains carrying millions of gallons of flammable crude oil through the state.

“We will do everything we can to see that they are implemented,” John Hanger, Pennsylvania’s secretary of planning and policy, said in a call with reporters.

About 60 to 70 trains carrying crude oil from the Bakken Shale (known to be more combustible than other types of crude oil) roll through Pennsylvania each week. There have been at least six derailments of these trains since February across North America. Pennsylvania is a major destination for Bakken crude because of refineries in the Philadelphia region equipped to process light sweet crude.

Zarembski said his recommendations go beyond Federal Railroad Administration safety standards and that railroads already follow many of the measures included in the report.

“Several of my recommendations are aimed at taking what they’re doing and intensifying it,” Zarembski said on the conference call. “Can we get the railroads to do it at a level where we think we can reduce the risk further?”

Wolf has previously asked Norfolk Southern and CSX, the two major railroads hauling Bakken crude through the state, to voluntarily reduce the speed of the trains carrying crude to 35 mph in big cities, which goes beyond the federally required 40 mph through cities with more than 100,000 people.

The railroads have refused. Hanger said their response has been “disappointing,” but that the governor will continue to push for reduced speeds. BNSF, another major U.S. railroad that moves crude oil but not in Pennsylvania, has already reduced speeds of crude oil trains to 35 mph in major cities.

An Associated Press article on the report included response from the railroads on the new report:

In a statement, Norfolk, Virginia-based Norfolk Southern said it is already increasing inspections of tracks that carry oil trains and is taking other measures that show its “strong commitment to safety and to the communities through which we operate.”

Jacksonville, Florida-based CSX said it will review Zarembski’s recommendations, noting the railroad “has made significant investments in the routes we use to transport crude oil.”