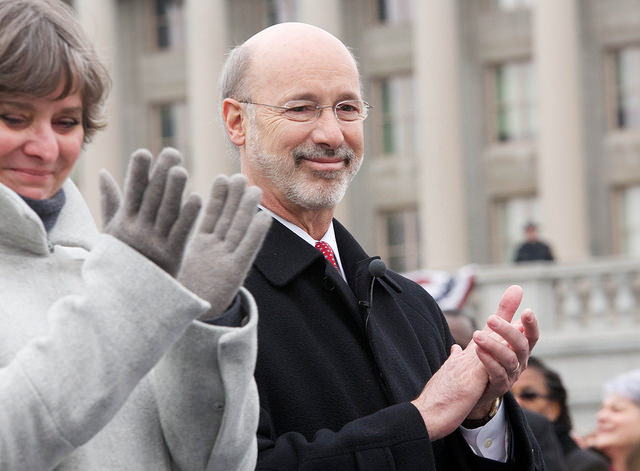 Gov. Tom Wolf has announced his plans to move forward on implementing a severance tax on the natural gas drilling industry. Such a tax would fulfill one of Wolf’s campaign promises and revenues would go to boost state education funding.

"We can get Pennsylvania back on track, and we can start by passing a commonsense severance tax that will help fund our schools — an idea with bipartisan support," Wolf, a Democrat, said in a statement.

At a press conference at Calm Elementary School in Chester County, Wolf laid out his plans for a proposal he’ll soon send to the state legislature.

The proposal, dubbed the Pennsylvania Education Reinvestment Act, implements a 5 percent severance tax plus 4.7 cents per thousand feet of volume on gas extraction.

The tax could generate $1 billion, which is more than the state’s current impact fee, which has brought in more than $200 million annually since 2012. Pennsylvania is the only gas extraction state that does not have a severance tax on drillers. The tax is modeled after West Virginia’s severance tax plan.

"I'm not proposing anything here that's radically different than anything else," he said, adding that a severance tax gives all Pennsylvanians a stake in wanting to make the natural gas industry a success.”

Wolf’s predecessor, Tom Corbett, and the gas industry are opposed to such a tax and want the current impact fee system to stay put. Industry officials have said a tax could drive business out of the state.

“While we look forward to evaluating the policy details outlined by the Governor today, it’s clear that new energy taxes will discourage capital investment into the commonwealth and make Pennsylvania less competitive,” the state’s leading gas group, the Marcellus Shale Coalition, said in a statement.

The proposal could face resistance from Republicans.

The measure could face some pushback in the state's Republican-controlled legislature. But some kind of fracking tax stands a chance of passing, as lawmakers from both parties have already proposed their own such taxes in recent weeks ranging from 3.2 percent to 8 percent.

"I don't think lawmakers are gearing up for gridlock," Wolf said. "Done right, a reasonable tax is actually the best thing for the private sector. This is a reasonable tax. It's been working all around the country."

If approved by the legislature, the tax would take effect Jan. 1, 2016, and the state would start seeing revenues beginning fiscal year 2017, according to Reuters.