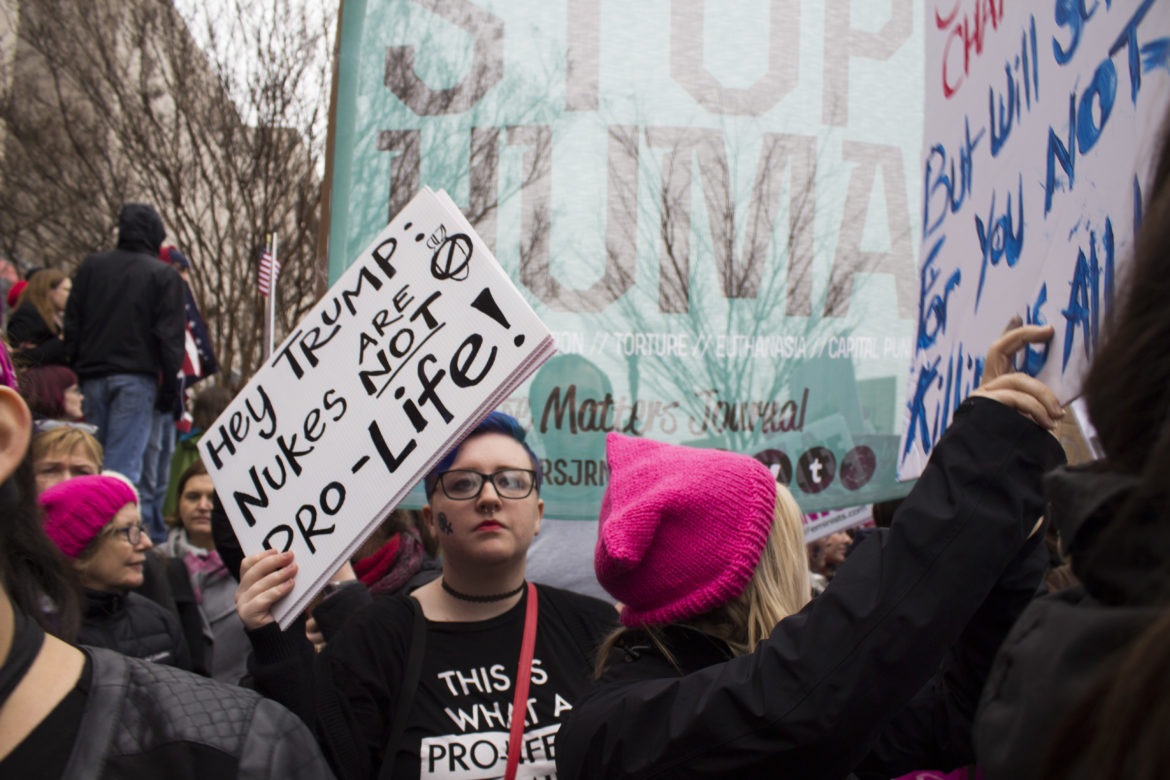 Rosemary Geraghty marches during the Women’s March on Washington, D.C., Saturday, Jan. 21. She holds a sign depicting her personal standpoint against all forms of violence: “Hey Trump: Nukes Are Not Pro-Life!” (Photo by Molly Duerig for PublicSource)

Rosemary Geraghty is used to people not understanding what she means when she says she’s a pro-life feminist. To send a message and make her point, she marched in the Women’s March on Washington Saturday.

A junior at the University of Pittsburgh, 20-year-old Geraghty wasn’t originally planning to travel to D.C. But she changed her mind less than a week before the march. She, together with five colleagues from the college’s pro-life student group, decided to make the trek after the march organizers had approved, and then abruptly revoked the status of an official partner from New Wave Feminists.

New Wave Feminists is a Texas-based national group that describes itself as “Badass. Pro-Life. Feminists.” The group was temporarily listed as a partner on the march’s website, until pro-choice activists complained and demanded the group’s removal. They argued that it is impossible to be an advocate for women’s rights while not supporting the right to abortion.

Despite the march’s flip-flop on whether or not anti-abortion groups were welcome, Geraghty was determined to be part of it and so were about 40 other pro-lifers from across the country. Geraghty affirms the march’s principles of non-violence and women’s rights as human rights.

To Geraghty, pro-life means believing all human beings — including the pre-born — have a certain level of intrinsic dignity and value, regardless of their circumstances or stage of life. And feminism, she maintains, is a movement for equality.

“When we’re talking about equality, we need to apply that to all people — gender, religious background, ability level and everything else,” Geraghty said. She believes that it is ableist to view a fetus as less valuable because it is not fully sentient, or does not have a heartbeat yet.

Geraghty calls herself “fairly liberal” and identifies as LGBTQIA. She leads a student group called Choose Life at Pitt and works as a social media coordinator for Life Matters Journal, a national publication that describes itself as nonsecular and nonpartisan. Geraghty uses the same terminology to describe herself. She’s an atheist. Her cell phone case reads, “Politics Kills.” Rosemary Geraghty snaps a selfie with her friend outside the Air and Space Museum at the Women’s March on Washington. Geraghty’s phone case reads, “Politics Kills.” (Photo by Molly Duerig for PublicSource)

Often, religious beliefs motivate an anti-abortion stance. But that’s not where Geraghty’s beliefs stem from.

“I don’t think there is a point in which we get a soul or anything like that,” she said.

Rather, she is opposed to violence of all kinds, including torture and war. She thinks that all lives are valuable, regardless of a person’s cultural identity, gender identification, or ability level.

Geraghty, who’s studying political science and communications at Pitt and is originally from Bensalem in Bucks County, does not understand why anyone — especially anyone who considers themselves pro-life — could vote for Donald Trump.

“We oppose Donald Trump’s racist, xenophobic rhetoric,” she says of herself and her fellow anti-abortion marchers. She explains that during the election, she heard a lot of arguments about why it was important to “vote for the pro-life candidate.” Her response is that because she is pro-life, she couldn’t morally justify voting for Trump.

“It’s not that I am forgetting about the babies when I say that I can’t vote for Trump. It’s that I’m remembering everyone else,” she explains. “The people and babies in other countries that he’s going to bomb. The women that have claimed he has sexually assaulted them.

“The fact that you can call yourself pro-life and support someone like that is very disturbing to me,” she says.

Besides protesting Trump, Geraghty also traveled to D.C. to call upon the Women’s March to “be more consistent” in its standpoints. At first, she says, the Unity Principles listed on the march’s website only referred to reproductive health care and access — not abortion specifically. It was only after the New Wave Feminists’ partnership was revoked that “open access to safe, legal, and affordable abortion” appeared on the march’s official site. From the inception of the march, intersectionality — a term referring to the connection of race, class, gender and other aspects of one’s identity — has been a prominent topic surrounding the march, both nationally and in Pittsburgh.

Molly Duerig is a freelance journalist who also manages the Filmmakers Youth Media program at Pittsburgh Filmmakers/Pittsburgh Center for the Arts. She can be reached at mollyduerig@gmail.com.