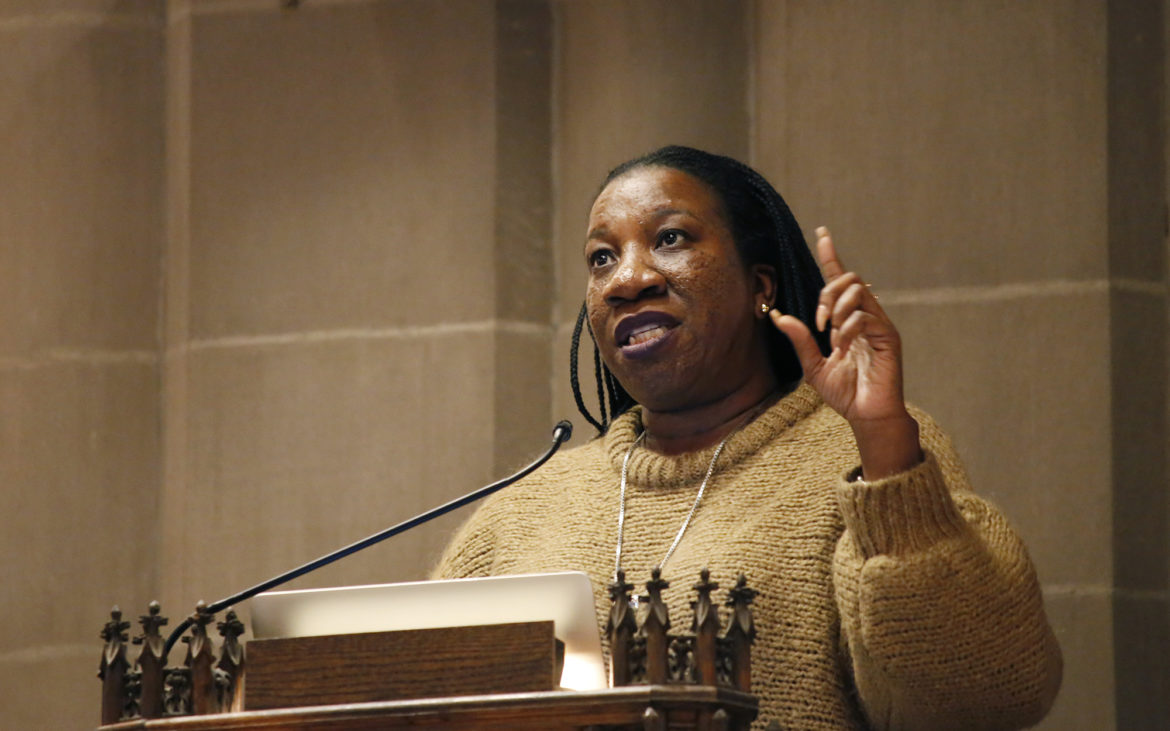 Tarana Burke, founder of the #MeToo movement, speaks at Calvary Episcopal Church in Shadyside on Feb. 6, 2018. (Photo by Ryan Loew/PublicSource)

When Tarana Burke speaks about #MeToo, the movement she has founded, her story starts with Heaven. Heaven, a girl Burke met when she worked as a summer camp director in Alabama, was what Burke calls “her special.”

“There’s always that one kid who’s like right up underneath you, who follows you around everywhere.” For her, that kid was Heaven.

One night, in a group discussion Burke facilitated for the girls at the camp to “just talk about anything,” she could tell Heaven was ready to share something. The girl didn’t get a chance to talk that night, so the next day, she found Burke in the hallway.

“I kept avoiding her because there was something that I saw the night before and I saw it that day in her eyes, that she had a story she was dying to tell, and I knew what it was.” Burke, a survivor of sexual violence, said she wasn’t ready to handle her own issues of trauma, let alone Heaven’s.

She sent Heaven away.

For years afterward, Burke said she “literally felt haunted” by her encounter with Heaven. “When she walked away from me, I’m like, ‘My god, I couldn’t even say ‘Me too” to her.’ I couldn’t even offer her that little bit of solace that you are not alone… I couldn’t even give that to her. And nobody actually gave that to me when I was young.”

Her failure to provide support to Heaven, and even to herself, prompted her to dedicate the last 25 years to creating a supportive space and mindset for women and girls who have experienced sexual violence under the banner “Me Too.” 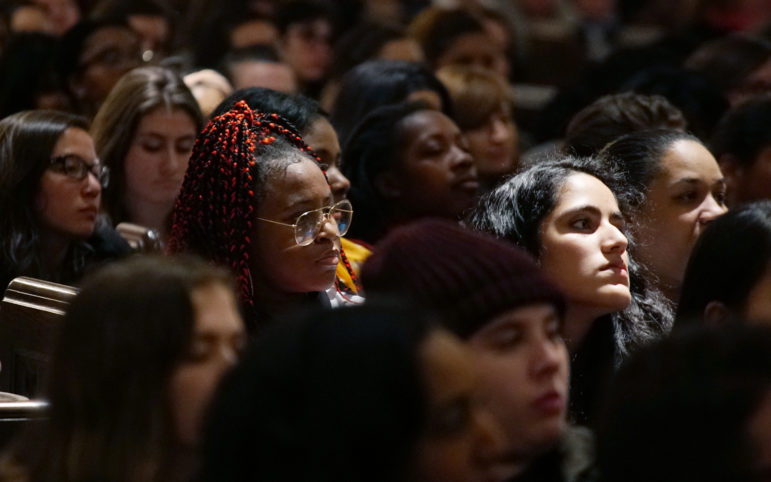 Speaking to a crowd of more than 1,000 people in the Calvary Episcopal Church in Shadyside on Tuesday night — an event hosted by PublicSource — Burke said her campaign took an unexpected turn on Oct. 15, 2017, when actress Alyssa Milano posted a tweet saying: “Suggested by a friend: If all the women who have been sexually harassed or assaulted wrote ‘Me too’ as a status, we might give people a sense of the magnitude of the problem. If you've been sexually harassed or assaulted write 'me too' as a reply to this tweet.”

Burke began witnessing a flood of people posting #MeToo all across social media to describe their experiences of sexual harassment and assault. She had a difficult choice to make. Her phone was abuzz with texts and social media notifications. Suddenly, thousands of people were speaking out about sexual violence using her terminology, but not her name.

Burke, now widely acknowledged as the #MeToo founder, said she initially worried her “life’s work was gonna be erased… that if the Internet got ahold of it, it would never hold the same meaning as it’s held all of these years; it would never serve the same people it’s served all these years.”

Her concerns were not unfounded. She recalled having “seen the appropriation of black women’s work, particularly over the Internet, again and again.”

But, she said, seeing the pain and vulnerability expressed in the flood of social media posts, she  wondered, “Who is holding space for these people?” She resolved to “insert myself into the conversation” to share knowledge and experience derived from years of working with survivors of sexual assault and being one herself.

#MeToo is “a global community of survivors committed to healing as individuals and as a community… and committed to doing the work of interrupting sexual violence wherever it lives.”

Although the national conversation sparked by #MeToo has focused overwhelmingly on famous white women experiencing sexual harassment and assault in the workplace, Burke emphasized the importance of having an expansive conversation about sexual violence.

She told a group of reporters earlier that evening that she sees her work now as “changing the conversation” to address the whole spectrum of sexual violence and focus on survivors and their healing rather than the perpetrators of abuse.

“There’s a spectrum of sexual violence, and sexual harassment is on one end of that,” Burke told reporters, “and it has to be dealt with, because it creates a culture that allows sexual violence to happen, but if the conversation stays there, then there’s all the other parts of that spectrum that get ignored.” 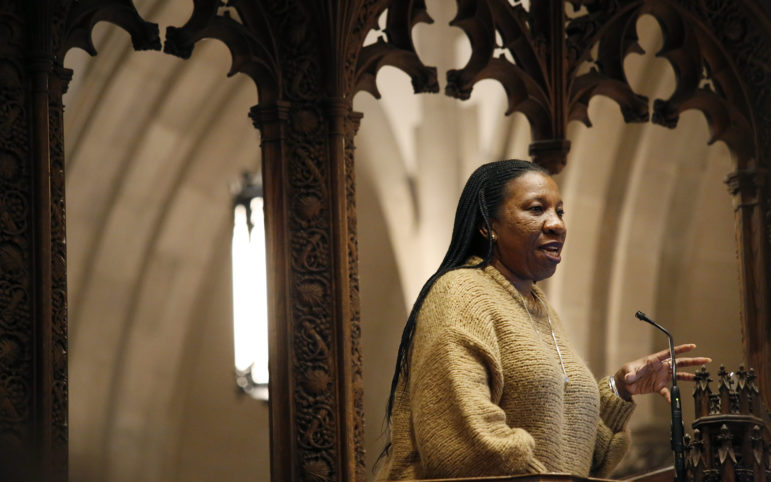 Tarana Burke is now widely acknowledged as the founder of the #MeToo movement that went viral on social media last fall after actress Alyssa Milano tweeted about it. (Photo by Ryan Loew/PublicSource)

Addressing the crowd, Burke offered a clear definition of #MeToo. “This is not about taking down powerful men,” but rather healing survivors and their communities, she said. Moreover, Burke explained, #MeToo is “not just for famous white cisgender women.”

For Burke, #MeToo is “a global community of survivors committed to healing as individuals and as a community… and committed to doing the work of interrupting sexual violence wherever it lives.”

When she first started working with young girls of color in Selma City Schools in Alabama, she focused on grounding them in a sense of self-worth. She recalled, “We wanted the young girls that we worked with to know that they were worthy just for existing, just for living and breathing and being people… Because we know that they live in a world that tries to tear them down and tell them that they have to be something special… the world tells you that you have to be this kind of pretty, this kind of fast, this kind of smart to earn your worthiness.” 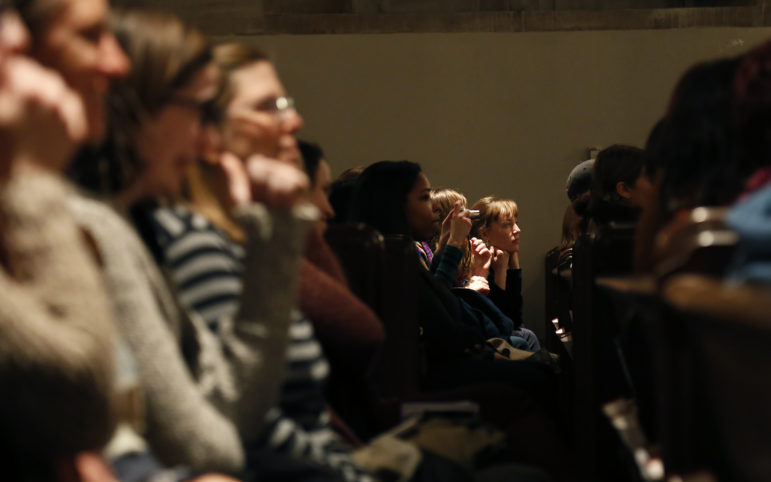 In Burke’s organizing around sexual violence, she focuses on supporting survivors.

“In the very beginning,” she said, “our work was about making sure that these girls knew that they were not alone, that they were heard, that they were believed and that there were people who supported them enough to take action… not just individually, but as a community.” Helping students acquire the language necessary to express their experiences is integral to that work, Burke said.

Although she did not have the financial or material resources she would have liked to execute this work, Burke recalled taking advice from one of her “elders”: “‘Take what you have to make what you need,’ and in this instance what I had was experience and what I needed was for radical community healing to happen with these young people.”

Today, Burke continues her anti-sexual violence organizing and her own personal healing journey. “Being a survivor is a title. Waking up every day and deciding to survive is hard work, and we have to be honest about that,” she said.

“My self-care is all the things that bring me personal joy that I collect ’cause those dark days are so dark,” she said. “I stay grounded in my joy as opposed to my trauma, and that is how I stay on my healing journey.”

She’s optimistic about the continued fight for safety and dignity for all, but honest about what that fight entails.

PublicSource intern Jordana Rosenfeld can be reached at jordana@publicsource.org. You can follow her on Twitter at @rosenfeldjb.