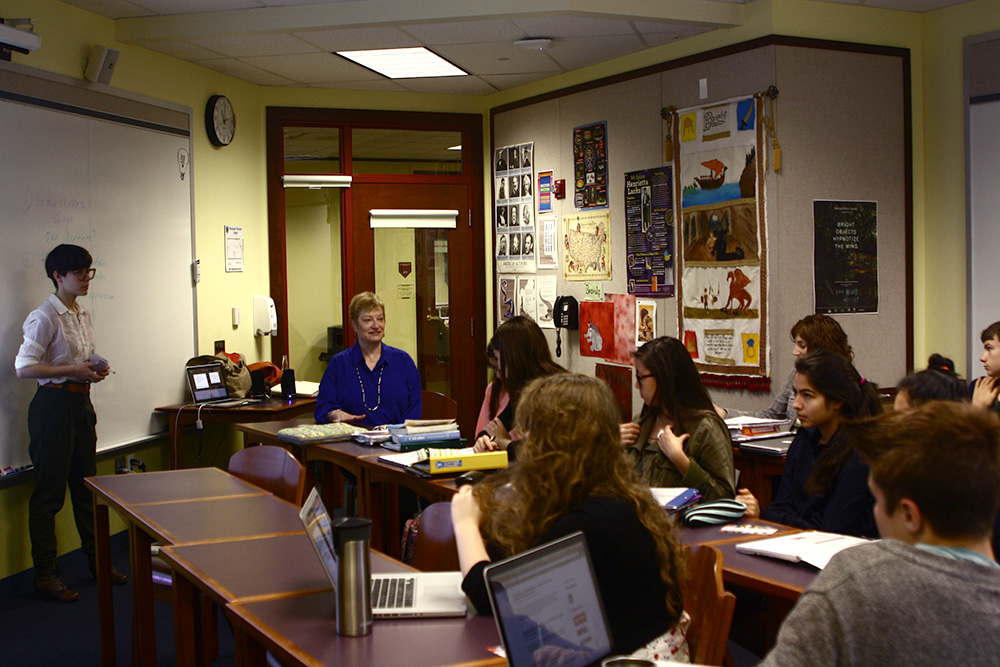 In the fall, an unusual request came my way. Renee Patrick, an English teacher at Winchester Thurston High School in Pittsburgh’s Shadyside, wanted PublicSource staffers to talk with two classes about media bias.

I was surprised. Junior and senior high-school students were studying media? Which media? Don't they get all their news from twitter, Facebook and Jon Stewart? Do they read the legacy media? Have they even heard of the 80 or so online news sources across the country like PublicSource that do in-depth news?

Meeting the students taught us a lot. We were surprised at how well-informed, curious and engaged these seniors were about media, asking questions, making comments, identifying bias or opinion in news articles. I was also a bit shocked that some said, 'No, I don't have time for twitter and Facebook.' Or, 'It's a waste of time.'

We talked about what comprises bias and used examples of stories, asking whether the subjects had been considered fairly. What was the language of bias? How did they identify it?

These students were grappling with some of the same questions we all must ask in a world of around-the-clock information and an Internet connection that doesn't always make it clear who's on the other side of the news:

Does the reporter tell both sides of the story? If not, why not?

What's the language that tells us the reporter might be biased? Is he or she giving us an accurately told story or surmise and opinion?

What could be influencing the telling of the story? Money? Politics?

There was certainly a time when print journalists, including me, were concerned that bloggers who were not journalists, advocacy groups and political spinmeisters would take over the web and it would be difficult to tell the difference in what they do and in fair and accurate journalism.

But we found that the students were good at recognizing bias in terms of asking: 'Who said that?' Who's the source? And, isn't that just the writer's opinion?'

We talked about attribution and how the only things that should not be sourced are things that the world recognizes as fact. Who said 15 of 20 widget makers have the highest safety standards? And who sets those standards?

Sometimes, we have found, something becomes so accepted as fact that there is no need for attribution. For example, there was a time when a reporter writing about climate change felt the need to get a quote or state that not everyone agreed that climate change is real.

Now, when 97 percent of scientists and scientific organizations agree that climate change is real and is caused by humans, journalists no longer feel the need to explain that there is still a minority who disagree. Or to quote them.

One of the questions students in both classes we spoke to asked was this: "Are the stories PublicSource writes the stories that the foundations that support you want you to write about?"

This is a perfectly logical question and one we get often.

Having worked for newspapers and magazines for more than three decades, I used to get the same questions about advertisers. Essentially, doesn't your paper (or magazine) go easy on the advertisers who pay the bills? The answer then, as now, is 'No.'

We are scrupulous about maintaining our independence. We don’t consult with funders on the issues we cover or a particular story’s progress. They see our stories when the rest of the world does.

Any journalistic institution -- whether in print or online -- that pulls its punches when writing about a specific issue, person or institution, will lose credibility with its readers. And if our credibility is gone, we are worthless.

And we try to fill in the gaps that newspapers, television, radio and online sites don’t cover as thoroughly. After all, no one media institution can cover everything.

We believe that by being transparent about the foundations that support us, we can assuage fears that we are controlled by them.

At Winchester-Thurston, one young woman was a bit shocked when I told the class that my reporters are not allowed to publicly talk about their political opinions or to display signs in their yards or bumper stickers on their cars for a particular candidate.

"But they're citizens. Don't they have a right to an opinion?" she asked, calling my standard "Orwellian.”

Of course they're citizens. And of course they have opinions. Any journalist who claims he or she doesn't is suspect and, I believe, out of touch with reality.

But do we want journalists telling us what they think? Or do we want them reporting all sides of a story and telling it in the most accountable, fact-based way possible?

The later, I believe.

And, thank you, Winchester Thurston students, for all you taught us.