After several years of controversy over lead in the drinking water and test results out of federal compliance, officials from Pittsburgh Water and Sewer Authority [PWSA] say new lead test results are both a step in the right direction and a sign that the worst may be in the rearview mirror.

In results released Friday, a sample of Pittsburgh water contained lead at 10 parts per billion [ppb], well below the federal  threshold of 15 ppb that would require remedial action.

“These latest lower lead testing results signals that PWSA is passing another major milestone as we work to regain the public’s trust," PWSA Board Chair Paul Leger said in a statement.

Lead is a neurotoxin that can affect brain development in children and medical experts say that there is no safe level of lead exposure.

The current test results mean that the household with lead levels higher than 90% of the other households sampled still tested below the federal guidelines. About 4% of 168 households tested exceeded the federal threshold, with one household exceeding it several times over.

Lead results from July through December 2019:

Pittsburgh isn’t entirely out of hot water yet. In order to be deemed compliant with federal rules, PWSA’s water has to test below the federal threshold for two six-month testing periods in a row. And it tested at 10 ppb once before, in the first half of 2018. The lead levels rose again the second half of that year to 20 ppb.

But PWSA officials believe that this time is different. Last spring, the authority introduced an additive called orthophosphates into the drinking water. Orthophosphates bonds with metal pipes to provide a protective layer that limits the amount of corrosion.

The problems with lead in the drinking water began when PWSA outsourced daily operations to Veolia, the world’s largest supplier of water services, and switched its previous corrosion control additive from soda ash to caustic soda in 2014 in order to save money. PWSA didn't do the required tests at the time to see if the caustic soda would work with the particular chemical balance of PWSA’s drinking water. In 2016, lead levels rose to 22 parts per billion and have since then largely remained out of federal compliance.

But according to Will Pickering, a spokesperson for PWSA, the agency has not been able to find a difference between the effectiveness of the two previous types of corrosion control that would explain the rise in lead levels over the past few years. But he said that orthophosphates have been proven to be more protective than both soda ash and caustic soda across the country.

"We have mountains of data to prove that in other water systems who have moved to orthophosphates as well and seen similar results,” he said. 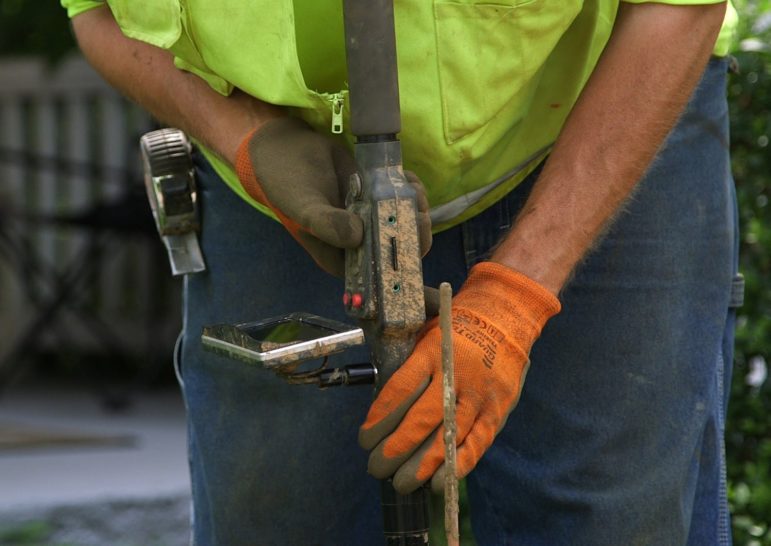 A PWSA contractor inserts a small camera into a curb box to identify the material of the service line below. (Photo by Ryan Loew/PublicSource)

PWSA has been conducting hundreds of additional tests not required by the EPA that show that orthophosphates are working, Pickering said. And, unlike the promising test results in 2018, this is the first time that PWSA has seen a steady decrease in its lead levels across two testing periods. When PWSA introduced orthophosphates in April of 2019, the lead levels across the system fell almost immediately in May and June. These latest results show that this decline continued.

Pickering said PWSA visited the homes that reported the highest lead levels over the past six months, and found that those homes either weren’t being lived in full-time or weren’t using much water. That meant that the orthophosphates hadn’t yet achieved a sufficient level of coating to protect the pipes from corrosion. “[I]t’s a cumulative protection,” Pickering said. “And you have to use the water to get that protection."

"We are encouraged by the results but our work is not done,” Robert Weimar, PWSA’s executive director, said in a statement. "We must continue with our stringent monitoring program to ensure that orthophosphate is working effectively in every corner of our service area."

Under a a consent order PWSA signed with the Department of Environmental Protection, the authority is required to replace 7% of its lead lines every six months until it gets back into compliance.

If PWSA’s test results fall below 15 ppb again over the next six months, the authority would come into compliance with federal law and no longer be required to replace 7% of its lead service lines. But PWSA has committed to continuing its lead service line replacement program until every line in the city is replaced.

PWSA has also conducted more than 17,000 inspections to identify which houses actually have lead service lines connecting from the main line in the street to their homes.

In the past, a household could’ve been included in the authority’s rest results if the homeowner incorrectly reported that his or her home had a lead service line.

Pickering says 100% of the households included in the latest round of testing have been confirmed to be the highest risk households with lead service lines.