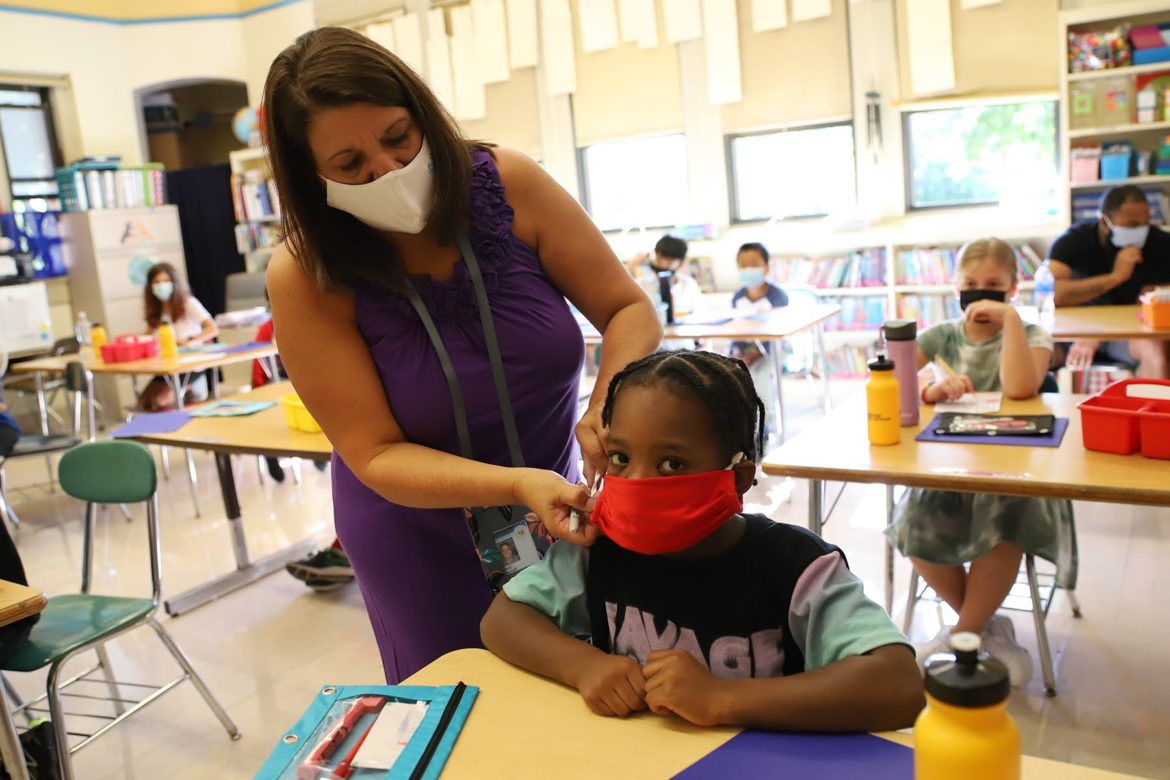 Rebecca Poremski left her daycare job on the morning of Sept. 3 to take her three kids to school. This was not the plan.

The family’s plan had been for her kids to ride the bus, but Poremski was disappointed to learn in recent weeks that the district’s bus driver shortage made them ineligible for rides.

The district’s plan — with its new expanded walk zones — was for the kids to walk the 1.5-mile stretch between their Brighton Heights home and Allegheny K-5. The anxiety about that proved too much. 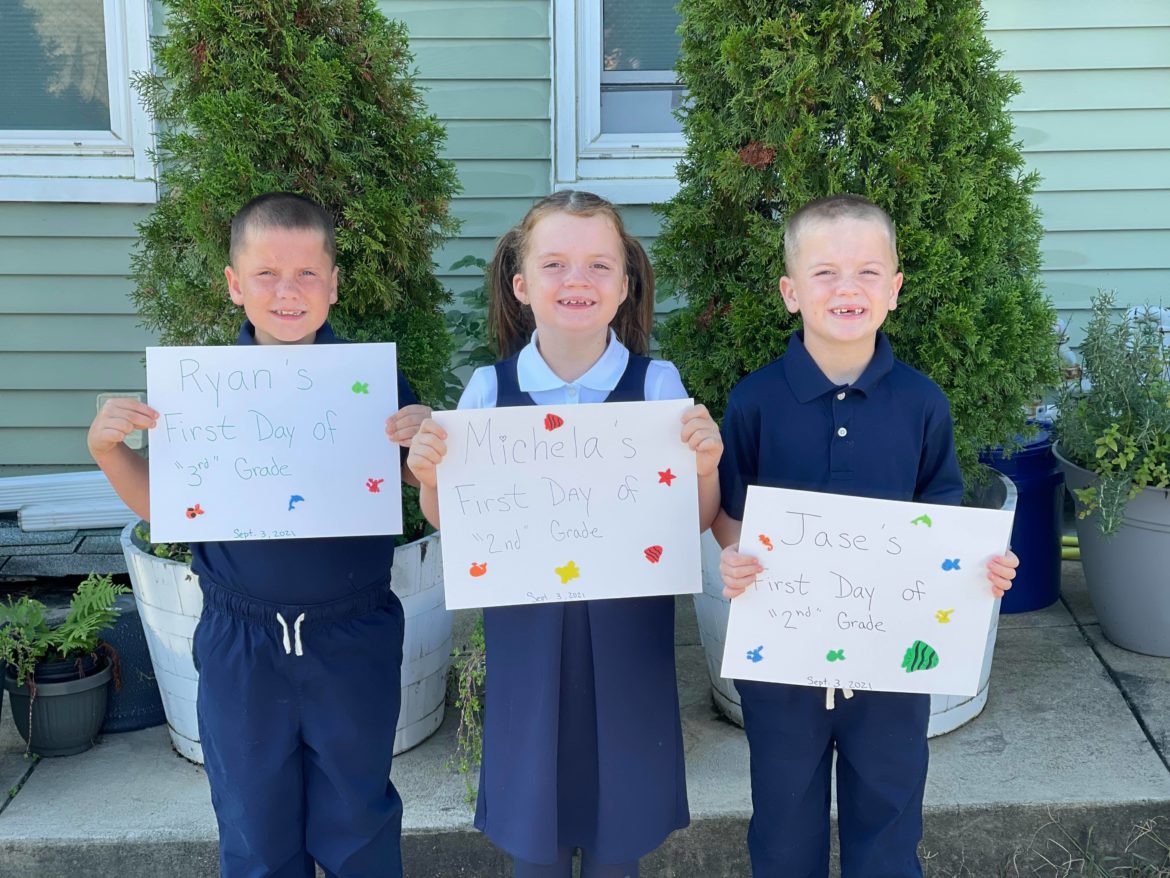 “I will be taking them every day,” until a bus is available for them, Poremski said Friday morning. But, she added, “I don’t think the gap will ever be worked out this year.”

With new tiered start times, also enacted to alleviate the district’s transportation issues, her kids will begin school at 9:25 a.m. — nearly three hours after Poremski begins her daily 6:30 a.m. shift at a daycare. Leaving work each day is a major disruption, but she can’t stand the idea of her children — two heading to second grade and one to third grade — traversing the five unmonitored intersections.

“I would never let them take that walk,” said Poremski, a single mother. “That is way too much for their age.” 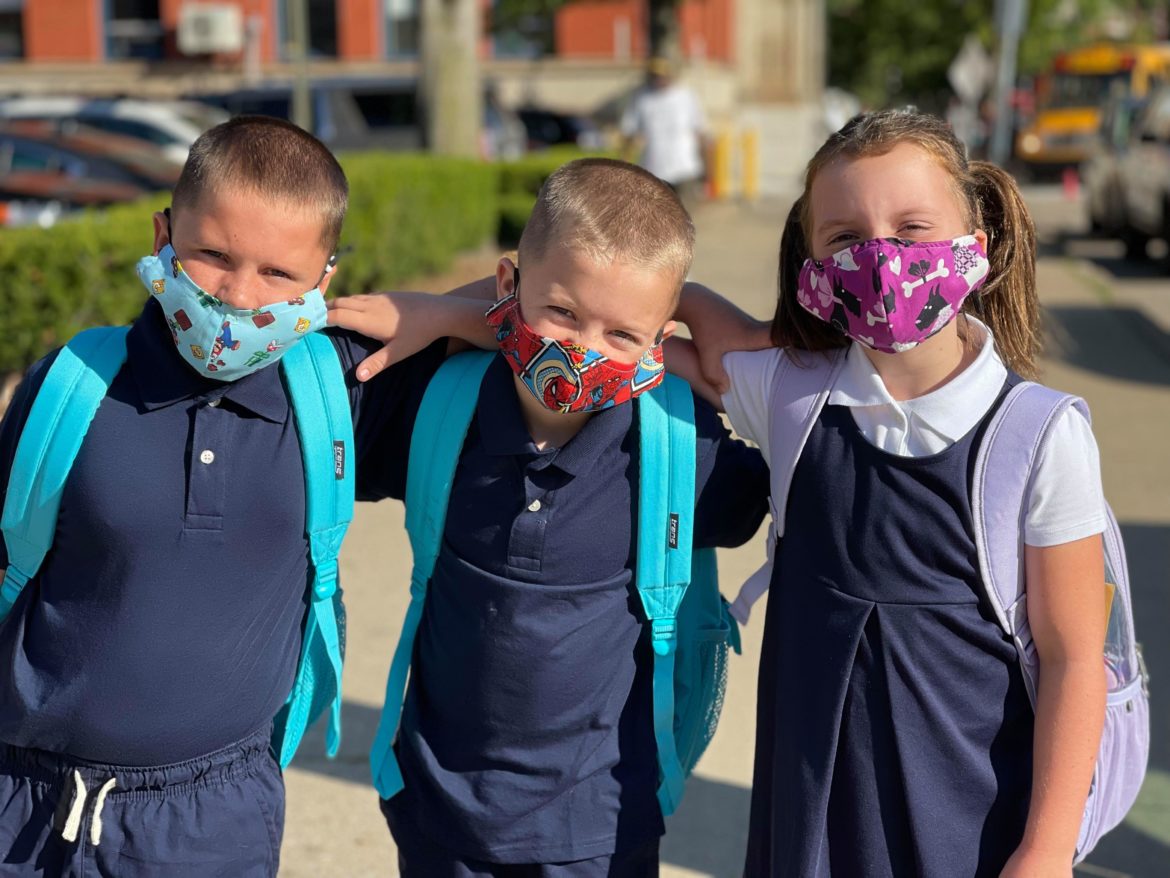 Pittsburgh Public Schools [PPS] welcomed thousands of students back to school buildings on Friday, about 12 hours after a heated parent protest called for the school board to hold Superintendent Anthony Hamlet accountable for ethics violations found by a state commission.

About 50 demonstrators gathered at the Board of Education building in Oakland on Thursday evening to demand a vote of no confidence in Hamlet by the board.

The school board broke its silence Friday morning, calling the findings of the commission’s report “concerning” and “a distraction” as school begins. The board said it is addressing issues presented in the report with the district’s solicitor and will consider “any appropriate actions” to be taken in the coming weeks.

Thursday’s protest occurred only three weeks after another in the same location against the changes to school start times and the last-minute changes of the school start date from Aug. 25 to Sept. 8 and then to Sept. 3.

Friday is the first step toward the goal of students resuming in-person learning five days a week for the first time in 18 months. But the year will inevitably come with baggage from the last year of learning loss and new challenges, chief among them the uncertainty about COVID.

Julia Graeper feels uneasy as her daughter returns to Colfax K-8 for fourth grade. The delta variant has brought rising COVID cases and hospitalizations, including among children. 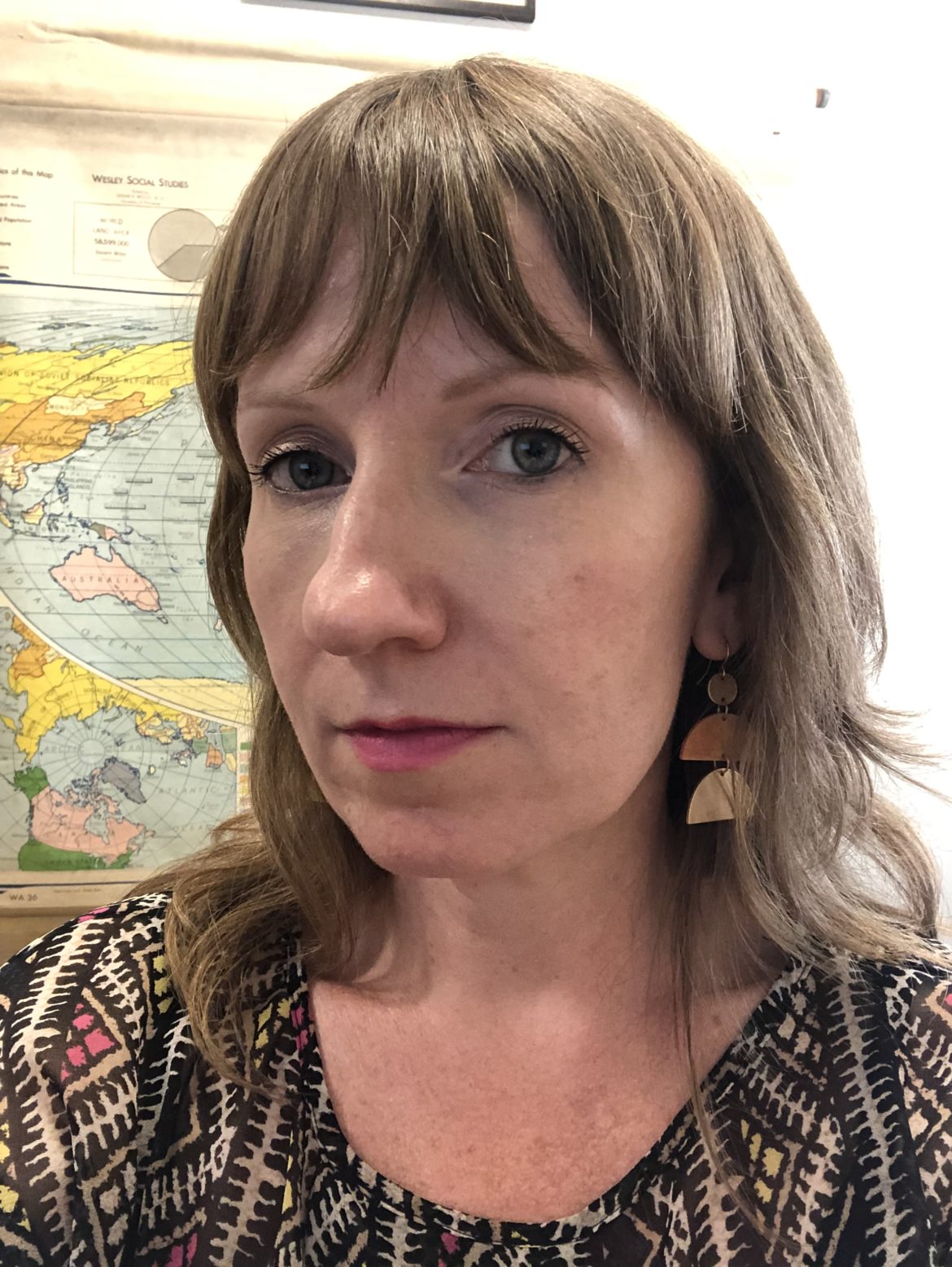 Julia Graeper feels uneasy about the return to school buildings amid rising COVID cases and hospitalizations, including among young children. Graeper's daughter is a fourth grader at Colfax K-8. (Credit: Julia Graeper)

“What’s going on with delta is a whole different animal than what was going on last spring, and I’m very worried about it, especially because she’s only 9 and she can’t get vaccinated and we don’t know when she’ll be able to get vaccinated,” Graeper said.

Graeper said she’s still waiting for updates from the district about its announcement on mandating teachers to be vaccinated or undergo regular COVID testing.

The Squirrel Hill mom’s other outstanding concern is what she views as a “total failure” of district leadership and the administration.

Tensions swelled between families and district leadership in recent weeks. The frequent changes often announced via robocalls led to petitions, protests and letters to the school board.

Then came an announcement from the Pennsylvania State Ethics Commission finding Hamlet violated state ethics laws. The violation itself, along with how Hamlet and his lawyer celebrated it as vindication because the wrongdoing was not found to be intentional, also prompted outrage from parents and created questions about what’s next for district leadership.

The PPS school board authorized bargaining to begin between the solicitor and the teacher’s union to work out details about testing and a vaccination mandate. 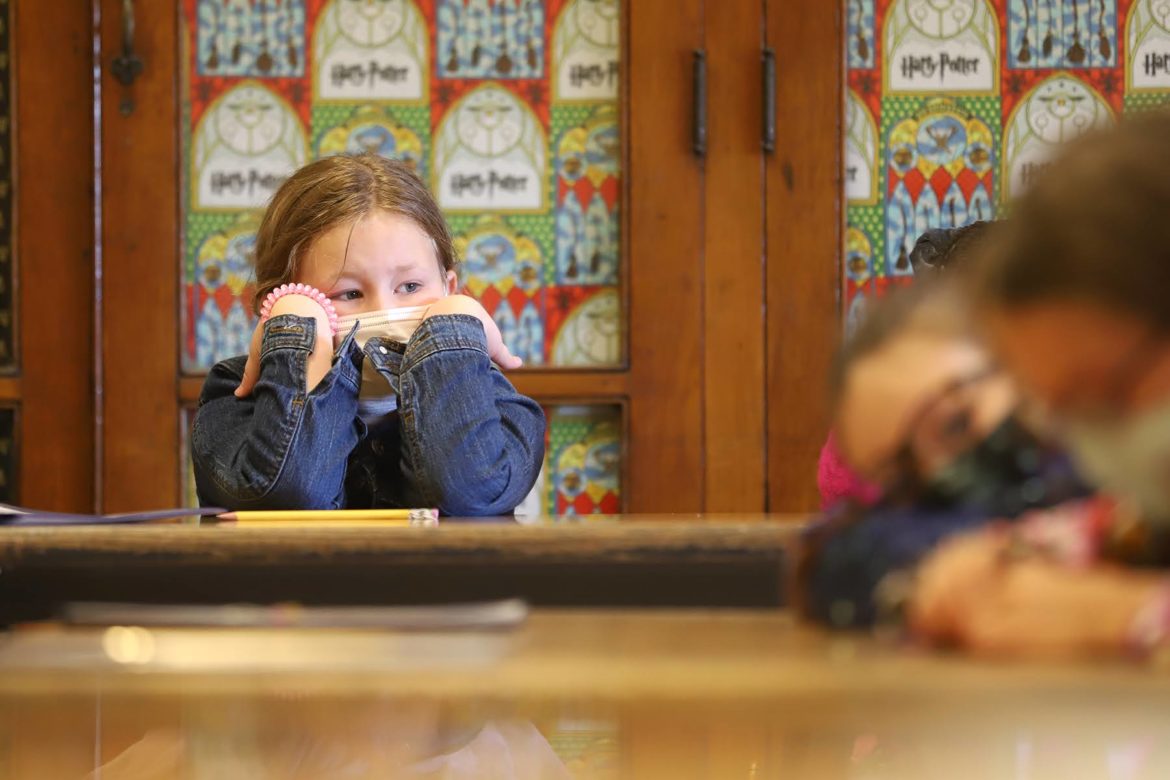 The district anticipates the seat gap to diminish entirely as new drivers are onboarded, trained and cleared to service students.

Developments have been quick as families roll into the new year, but amid everything, some parents and experts see the year as an opportunity to recover learning loss from a rocky transition to virtual learning last school year.

“She did horrible,” Baskins said. At times, her daughter struggled with connectivity or had difficulty with the technology. So when she returned to hybrid in-person learning in the spring, it was good for her.

But on the evening before the first day of school for the 2021-22 school year, Baskins still wasn’t sure her daughter would return to Pittsburgh Obama for seventh grade. Her daughter took the school bus in the spring, but they received a note in recent days that said her daughter was in the district’s seat gap, meaning they have a bus for her but not a driver.

Baskins’ 11-year-old daughter, under the district’s alternative plan, will go from catching the bus a few steps from her Hill District home to riding two Port Authority buses. Baskins said she’s just not comfortable with that.

Baskins doesn’t feel like she can sit around and wait for the district to find a school bus driver. For now, she’s waiting to send her daughter to school until after Labor Day.

Some families worry about filtration in school buildings where some windows don’t open or the air conditioning doesn’t run throughout the building.

Lydia Blank worries about her two eldest children staying inside classrooms at Allderdice High School so many hours in a row.

Good ventilation is a key part of COVID-19 prevention, but continues to be a concern for parents sending their kids to decades-old buildings. Blank said she doesn’t believe the ventilation system at the high school is very good, but she remains hopeful in the district’s plans to keep kids safe. Beyond masks, the district modified classrooms to separate students by 3 feet and has HEPA air purifiers in main offices, isolation rooms and other high-traffic areas.

District leaders have said that none of its buildings rely on opening windows for proper ventilation.

Blank and her 14-year-old son Landon spent Thursday night at an orientation walking the halls of Allderdice to acclimate him for his freshman year. The year will be a major adjustment for Landon, who stayed in remote learning the entire 2020-21 school year.

Beyond physically being at school, he will need to get used to an earlier start time. Blank believes high school students should have been given later start times than younger students. She said she hopes her son and her 16-year-old daughter, Abby, will be awake enough in class at 7:15 a.m. to perform at their best. “But time will tell.”