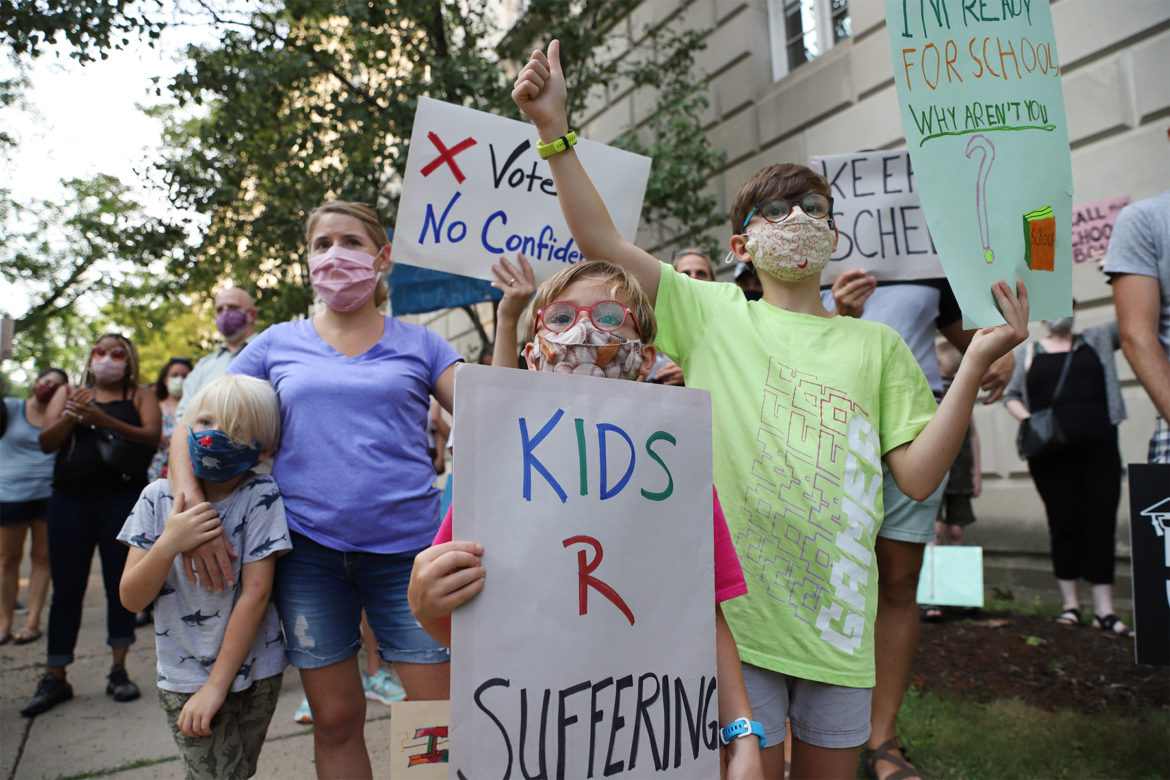 Many Pittsburgh families were circling Aug. 25 on their calendars and stuffing backpacks, looking to soon regain a sense of normalcy. Pittsburgh Public Schools [PPS] would be back in classrooms in school buildings five days a week. COVID concerns still loomed, especially mounting worries about new variants and masking in schools, but back-to-school planning was in full swing.

All of a sudden, there was another disruptive force: a bus driver shortage.

The shortage is not new, though. It has been a focal point in district board meetings for at least six months. The district says nearly 11,000 students would not have rides to and from school under the current conditions. Just last week, district leadership started publicly letting on that it was considering a change in school start and end times to alleviate the transportation challenges. On Saturday, the district posted on its website a proposed schedule, with some schools moving to begin at 7:15 a.m.

Families weren’t notified about the proposal officially until an email update on Tuesday from Superintendent Anthony Hamlet and a robocall, which came the same day Hamlet announced the first day of school would be delayed two weeks to Sept. 8.

Hundreds of district families are now saying enough is enough. They’re fed up with the changes and what they see as a pattern of last-minute communication. Many parents are worried about how the time changes will affect their routines and how young students will travel safely at early hours when it may still be dark. Parents are protesting online, in Facebook groups and petitions, and in person, testifying at board meetings and planning to rally outside the Board of Education building in Oakland at 6 p.m. 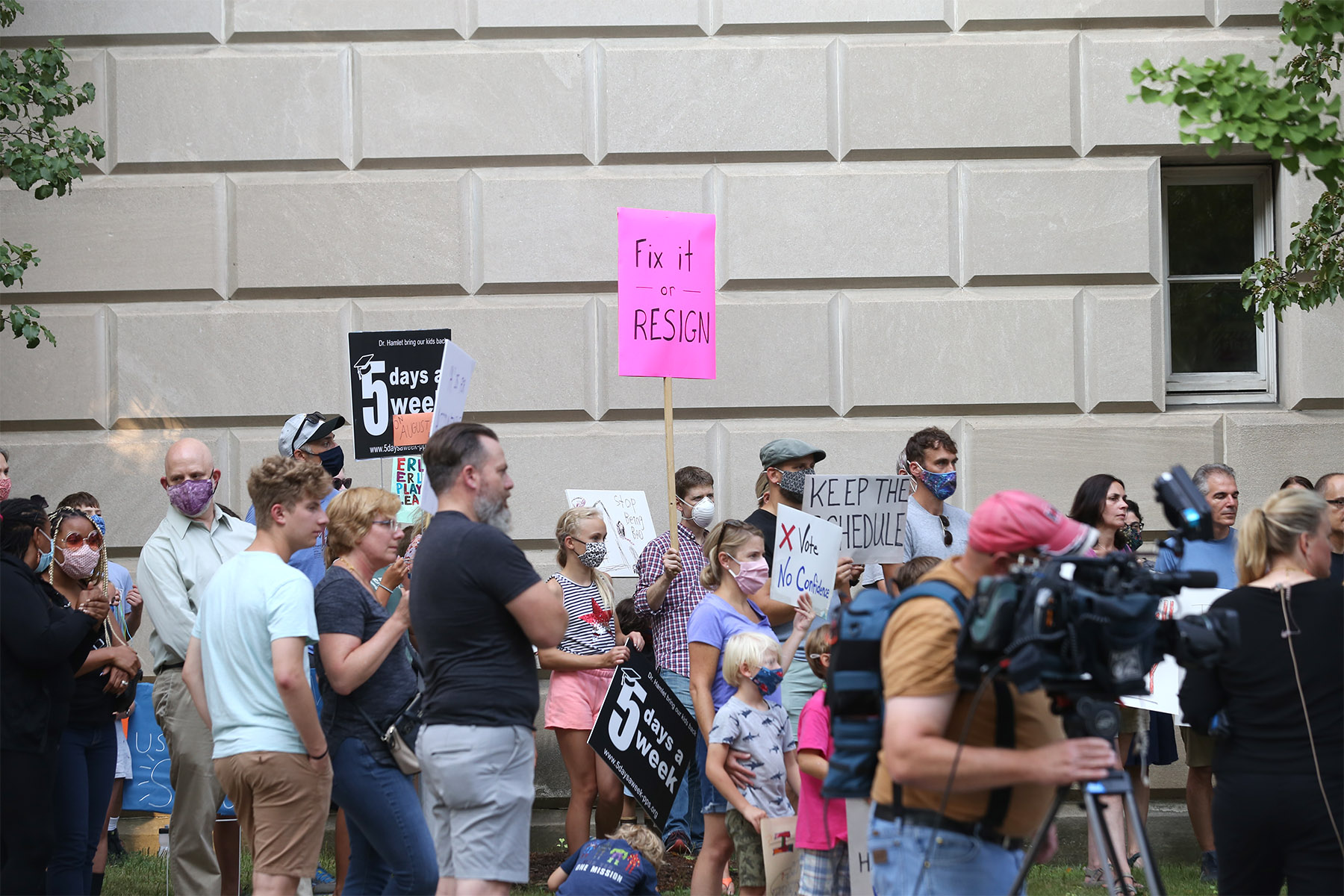 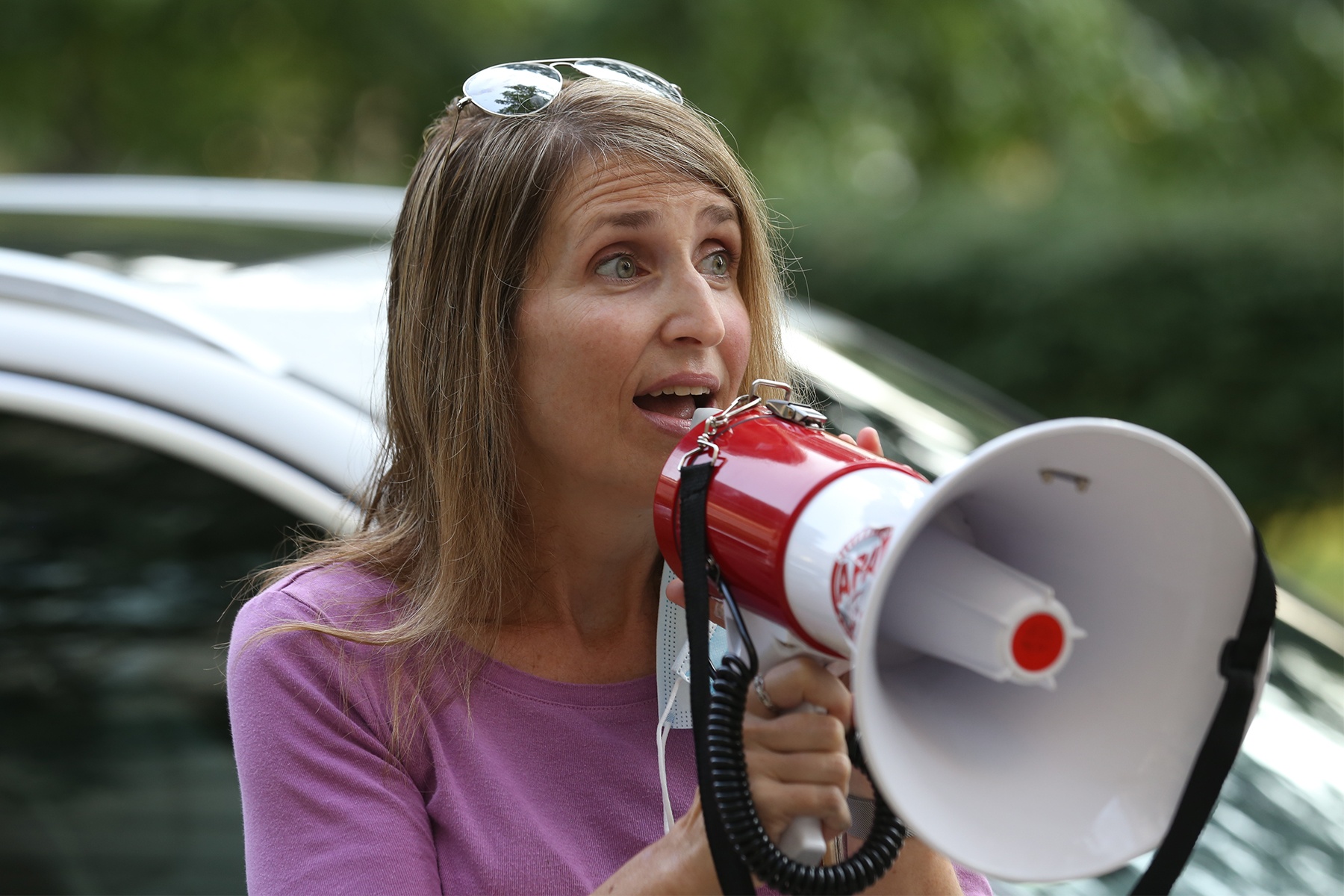 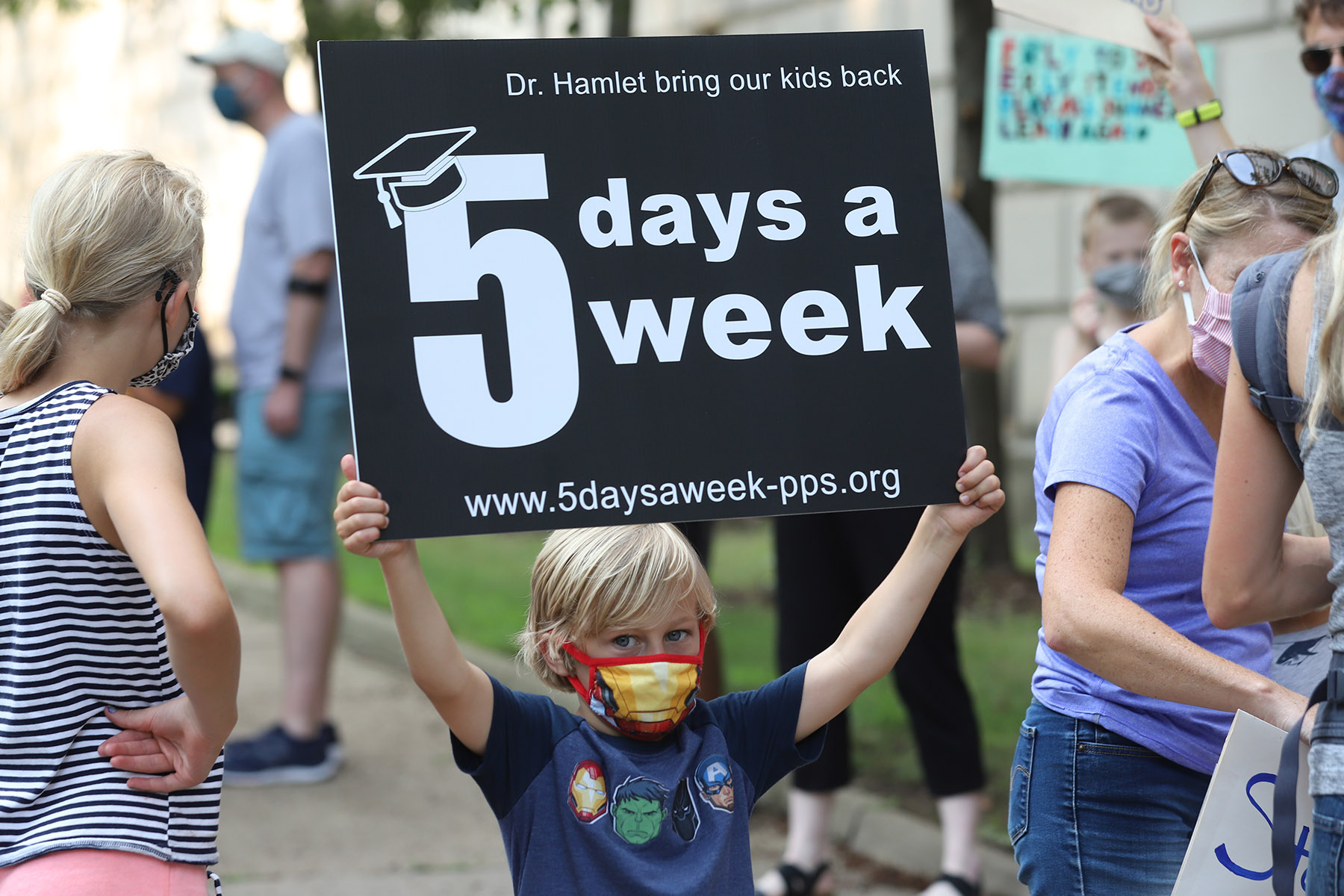 Ryles Bigham, 5, of Squirrel Hill, holds a sign at a demonstration Wednesday outside the Pittsburgh Public Schools administration building in Oakland. (Photo by Ryan Loew/PublicSource) 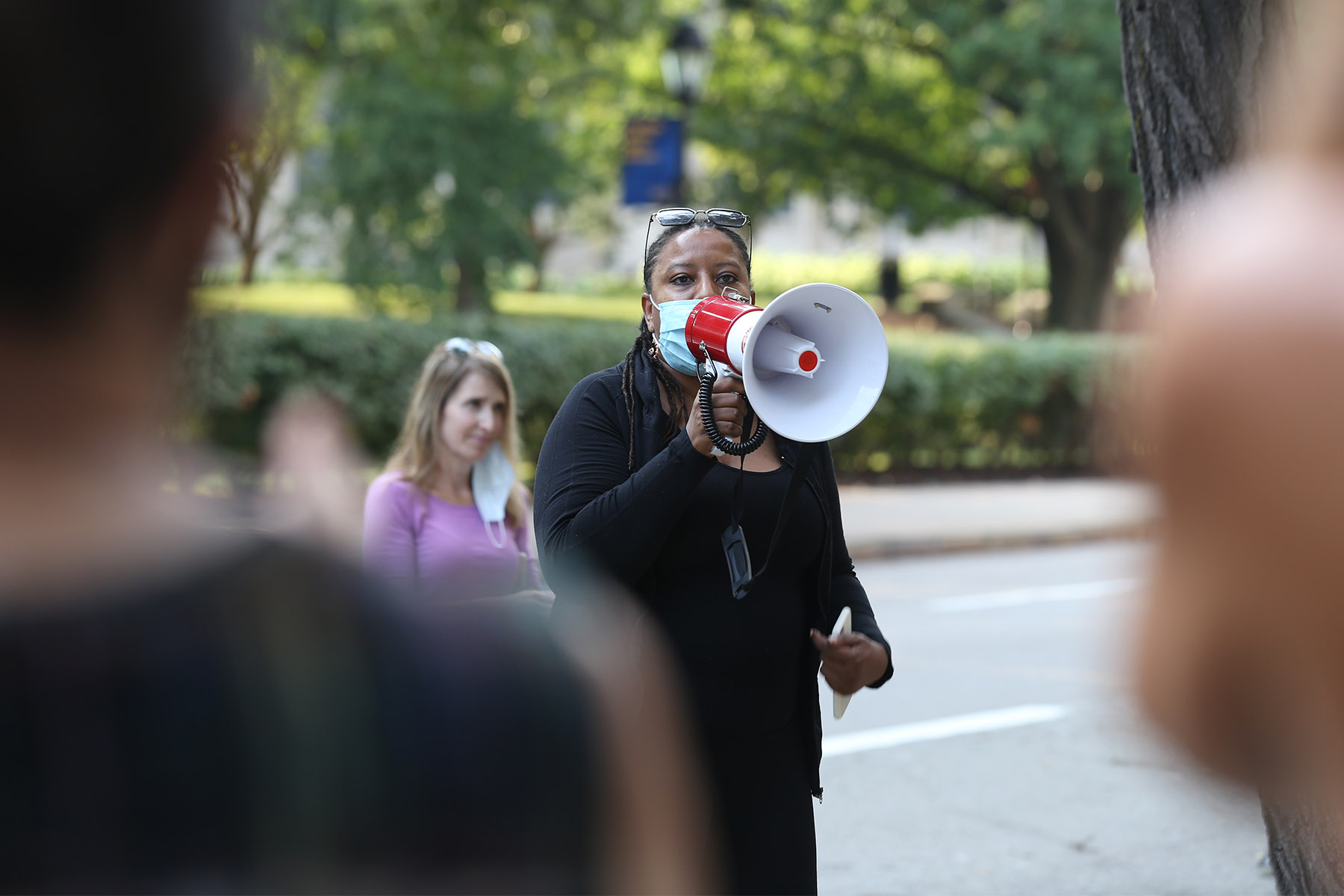 Brandi Fisher, president and CEO of the Alliance for Police Accountability, speaks at Wednesday's protest. (Photo by Ryan Loew/PublicSource) 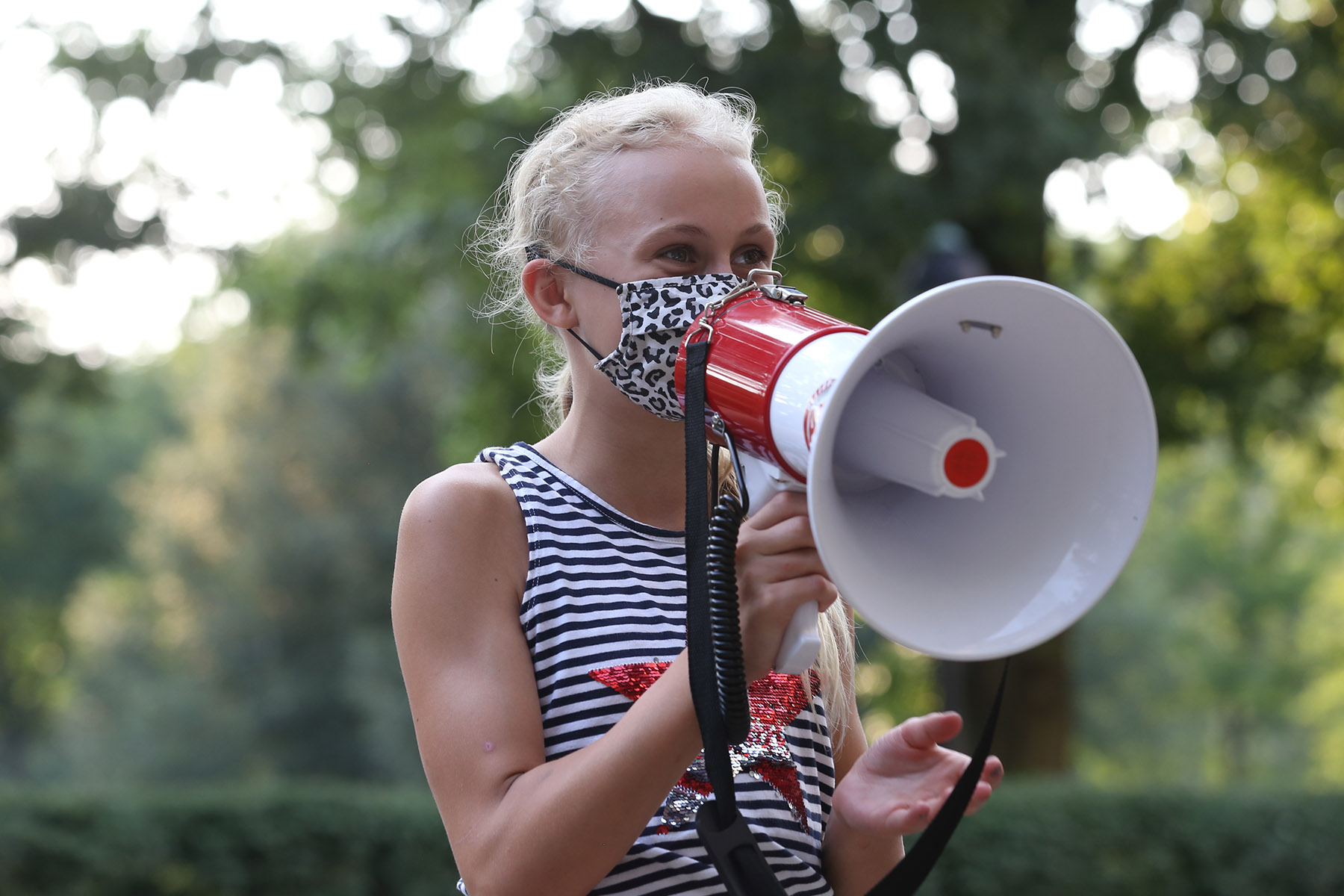 Eleven-year-old Currie Bigham, who will start sixth grade at Colfax K-8 this school year, speaks at the protest. Wanting to see her friends, Currie said she hopes the district will change back to its original start date of Aug. 25 and that the "whole year we're in school five days a week in person." 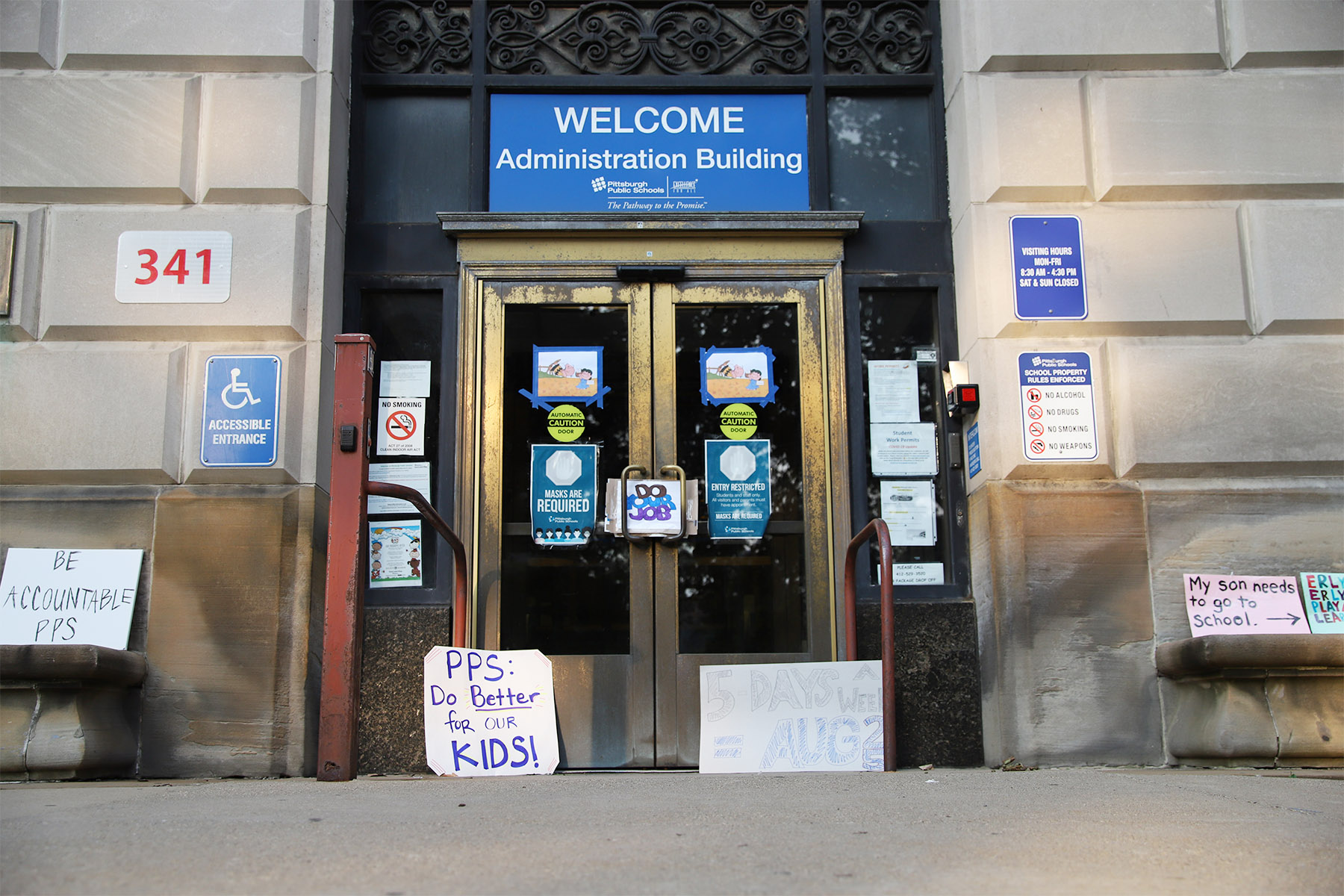 The district maintains earlier start times would allow them to transport more students.
District Spokeswoman Ebony Pugh said the early start times aren’t unprecedented, noting that Perry High School’s start time has been 7:08 a.m. for at least the past six years. She said the proposed schedule is a strategy for the district to get as many students to school as possible.

“It’s going to be a shift, and we want to help support as much as we can but it really is about getting all our kids to school,” Pugh said.

The district attributes the school delay to concerns about masks in August heat and the need for more time to recruit and train bus drivers.

The proposed changes are compounding distress after the last year-plus of virtual schooling that started with a rocky rollout of technology for students and several false starts by the district on the return to in-person schooling.

At a Tuesday education committee meeting, Board Member Cynthia Falls said she wanted to address the elephant in the room – that she and other board members had received countless texts, calls, emails and online messages from disgruntled parents who were against the suggested changes and upset to have learned about the district updates through news media. She urged community members with solutions and ideas to share them with the board by contacting the administration or their principal.

District leaders are going over the root causes of the bus driver shortage, the district's drivers needs and the proposed modifications. Without any modifications, the district needs nearly 800 drivers, district officials say. pic.twitter.com/CzKQPunL7U

Board Member Veronica Edwards advocated to keep the Aug. 25 return to school and said she believed the district can make an August return happen, so students don’t fall behind further academically.

“I believe we can do that,” she said. “The kids are already far enough behind. How much further can they go? And I'm not interested in seeing them go much further.”

On social media, parents are expressing worries about young kids walking on roads with skinny sidewalks and high traffic, or needing to transfer buses in downtown Pittsburgh before sunrise. Other parents wondered how after-school activities, such as band, choir and musicals would be impacted and why the district is still struggling despite knowing about the issues since last year.

A change.org petition circulated by parents claims a 7:15 a.m. start time, proposed for multiple schools including Pittsburgh Allderdice and Obama, will impact all students’ health and academic performance negatively. The petition states that it “will be especially dangerous” for Black students, students who travel far distances and economically disadvantaged students.

PGH folks: PPS has proposed ridiculously early start times for city high schools, including 7:15am for Allderdice. Everything we know about teens, sleep, & education tells us that this is a terrible idea. Please sign our petition against this proposal: https://t.co/pEiJ33VhDD

Schools are urged by the American Academy of Pediatrics to start school for middle and high school students after 8:30 a.m. to give students sufficient sleep and contribute to better academic performance and physical and mental health.

Anne Stetler fears a new 7:15 a.m. start time will force her to pull her 12-year-old daughter from the district and begrudgingly enroll her at PA Cyber, where there will be more flexibility but she’ll be without her beloved teachers, friends, district opportunities and local community. Stetler is one of dozens of parents who wrote to the school board.

Stetler’s daughter, Hanan, figure skates each morning. The proposed change would make skating before school impossible. “She is at too high of a level to ask her to stop skating,” Stetler said.

“I’m really upset about it because then I lose my spot in an IB school, and I can’t go to a better college.”