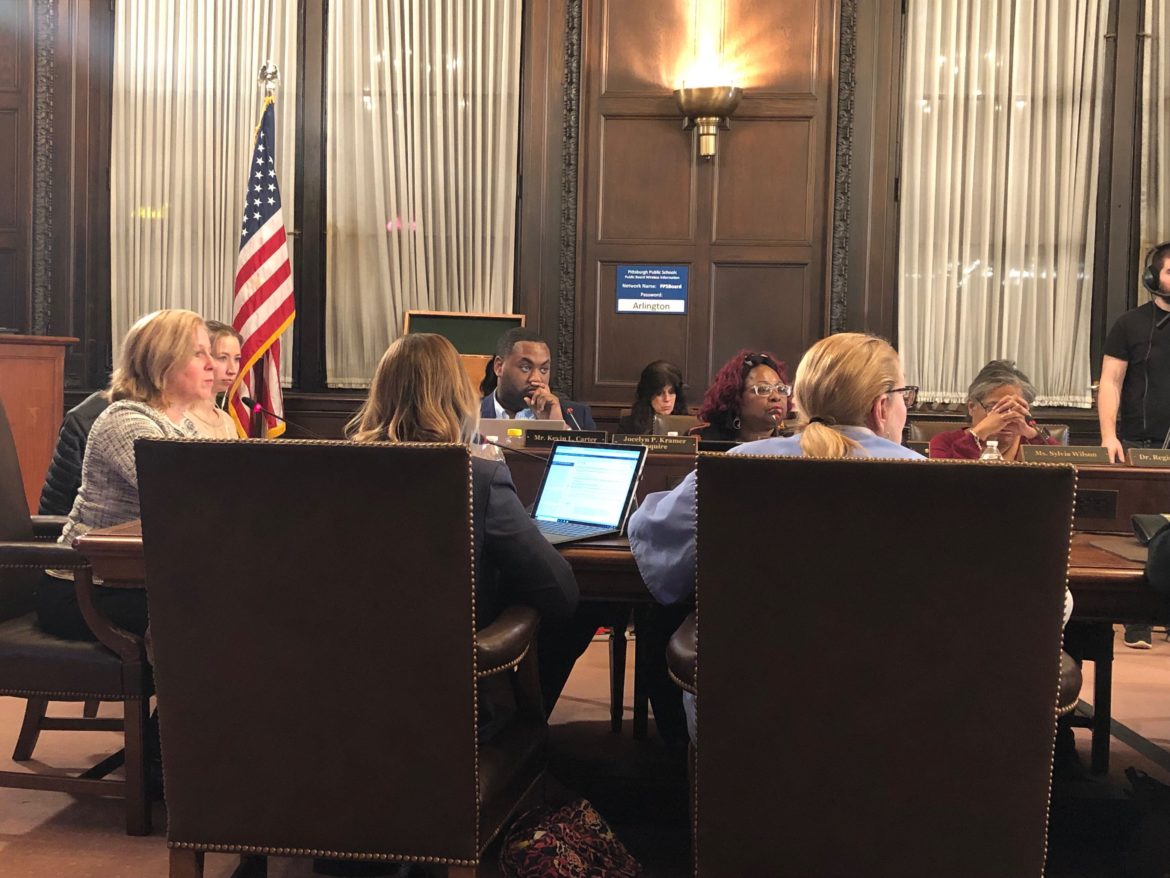 The Pittsburgh Public Schools board voted 8-0 on Feb. 27 against a bid by Imani Christian Academy to become a secular charter school. (Photo by Mary Niederberger/PublicSource)

The Pittsburgh Public Schools board voted unanimously on Feb. 27 to deny a charter that would have transformed Imani Christian Academy in East Hills into the secular Imani Academy charter school.

The vote at the board’s legislative meeting follows a report earlier this month by the district’s charter review committee that found Imani’s charter application did not include all of the information required under Pennsylvania’s Charter School Law.

The law requires applications for brick-and-mortar charter schools to be approved by the board of the district in which the school will be located. The law also requires districts to pay tuition for the students who live in their boundaries who attend charter schools.

Imani officials can appeal the denial to the state Charter School Appeal Board.

Officials from Imani could not be reached for comment. A woman who answered the phone at the school this morning said there would be no comment “at this time.”

Among the problems cited by the district charter review team were the fact that Imani’s curriculum, as presented in its charter application, was not aligned with the Pennsylvania Core standards and the application did not include a special education curriculum or special education director or teacher listed among the staff.

The board voted 8-0, with board member Sala Udin absent. Udin was among five board members who expressed concerns about the Imani application at a Feb. 5 public meeting at which the district’s charter review team presented its findings and board members discussed the application.

Only board member Cynthia Falls commented at the time of the Wednesday vote.

“We were given about a full page of reasons what the deficit was for this application for this charter school,” Falls said during the meeting.

Concerns about the school’s financial stability and the fact that it would not offer programming that isn’t already available in Pittsburgh Public Schools were included in the board’s resolution to deny the charter. The resolution reiterated the findings of the district’s review team.

The review team was headed by Lisa Augustin, director of charter schools for the Pittsburgh district and included 15 district employees, along with Robert Isherwood, an associate professor of special education at Slippery Rock University, who is a school district consultant on special education matters.

Augustin noted at the Feb. 5 meeting that Imani’s application contained religious references, including a mention of “religious studies” and the terminology “Christian nuance’ in the science curriculum.

Imani CEO and Head of School Paulo Nzambi and Imani’s attorney Kevin McKenna tried to assure the school board on Feb. 5 that Imani would shed its Christian mission and become a public school with a “civic leadership curriculum.” Students would be required to perform community service and focus on academic achievement.

Imani’s charter application follows a trend among other religious schools around the country who have chosen to transform into charter schools after struggling to stay afloat financially. The conversions have occurred in Florida, Tennessee and Washington D.C. Like Imani, many of the schools served minority or low-income students.

Imani operates on a combination of what Nzambi described as “modest tuition,” fundraising and participation in the state’s Educational Improvement Tax Credit program.

The charter application called for enrollment of 230 students in grades K-12.

Nzambi estimated at the Feb.5 meeting that 40 to 45 percent of the students who currently attend Imani live within the boundaries of Pittsburgh’s school district. Imani enrolled about 198 students in the 2017-18 school year, according to the state Department of Education.

According to Nzambi, converting Imani into a charter school would allow more students access because some families who want to send their children cannot afford to do so because of tuition costs. Imani students come from the adjacent East Hills housing complex and other nearby low-income neighborhoods.