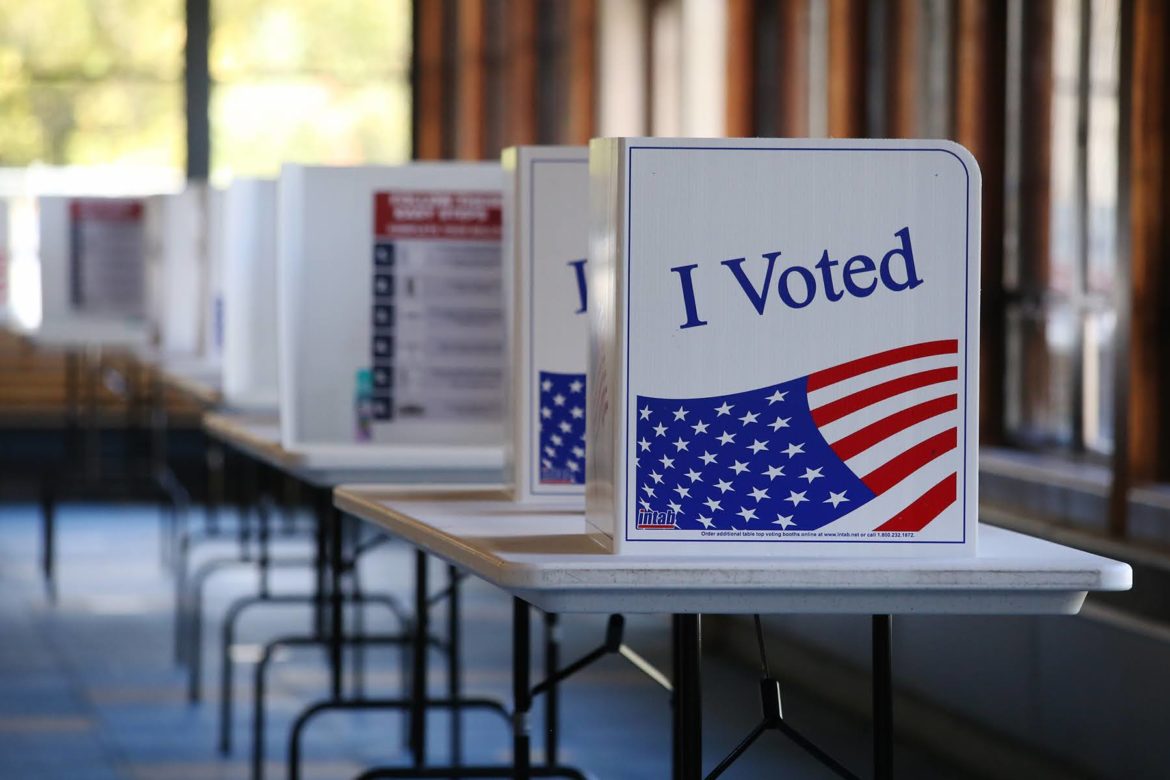 Privacy booths set up at a satellite elections office at the South Park Ice Rink. Voters there could request and fill out mail-in ballots before Election Day. (Photo by Ryan Loew/PublicSource)

Mayor Bill Peduto and state Rep. Ed Gainey, the top two candidates for mayor of Pittsburgh in Tuesday’s Democratic primary, combined to raise more than $1.2 million between Jan. 1 and May 3 this year. Campaign finance reports show that Peduto focused spending on TV advertising while Gainey focused on mailers, signs and other advertising.

The total spending numbers roughly mirror the fundraising totals for this campaign cycle: the incumbent Peduto outraised the challenger Gainey, about $900,000 to $306,000, and Peduto outspent Gainey $878,142 to $241,954.

The two campaigns used different strategies to deploy campaign funds over the last five months. The Peduto campaign spent almost $340,000 on advertising — about 39% of all spending, covering the city with print, digital and TV ads. More than $300,000 of this went to TV ads. The Gainey campaign spent more than $55,000 on sending mail to voters, more than 22% of its total spending.

The Peduto campaign listed several expenditures as “research” on its report, totaling $109,224. More than $102,000 of that sum went to a Washington, D.C.-based firm called Lake Research Partners, which describes itself as a “national public opinion and political strategy research firm.”

The Gainey campaign didn’t spend more than $10,000 in any two-week period until early March, and the Peduto campaign shifted into high gear in late March and April. The mayor’s campaign spent more than $262,000 in the first half of April alone.

The money spent by each candidate’s official campaign does not encompass all of the spending around this race. Political action committees, or PACs, are independently spending significant sums on both candidates.

More than $1 million has gone into Pittsburgh’s mayoral race. Where did it come from?

Good Jobs Pittsburgh, a labor union-backed PAC that is supporting Peduto, paid $134,905 to a Brooklyn-based political consulting firm. Pittsburgh Justice for All, a pro-Gainey PAC funded largely by healthcare worker unions, raised more than $400,000 since Jan. 1 and reported a payment of nearly $50,000 to a D.C.-based communications firm.

The single vendor that received the most from the Peduto campaign was Buying Time, LLC, a company that handles TV ad purchases. Peduto spent more than $315,000 on TV ads through the company. Gainey’s largest bill was for more than $90,000 to Berlin Rosen, a New York-based communications firm that handled a lot of the campaign’s printing, mailing and advertising.

The Peduto campaign spent more than $1,300 on food. The most frequent stop was Cappy’s Cafe in Shadyside, but the largest single bill was a $523 order at Jimmy John’s. The Gainey team spent just $176 on food, patronizing Domino’s Pizza, Dunkin’ Donuts and Starbucks.